How to Convert a Chicken Coop into a Duck House - Modern Farmer
Animals, How-To, Plants

How to Convert a Chicken Coop into a Duck House

Ducks think chicken coops make fine homes, but they would prefer a few modifications before moving in. 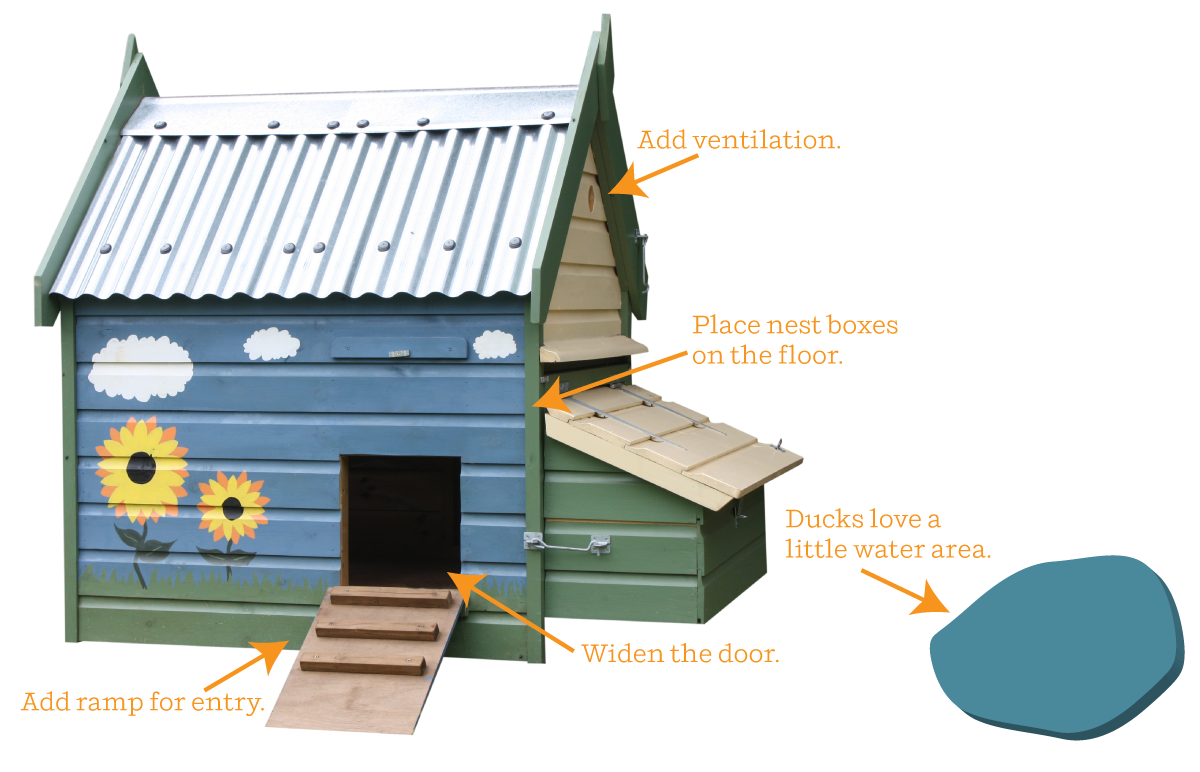 The standard chicken coop is taller than a duck house needs to be because nesting boxes are typically installed off the ground along with a bar for roosting on at night. The first thing to do is to remove these two unnecessary items. There is no need to make the coop shorter than it already is, but duck houses only need to be about 3 feet tall, as opposed to 5 or 6 feet for a chicken coop. Ducks need more floor space per bird than chickens, however, so you may need to build an addition – or just be content with fewer birds. Plan on about 4 square feet of space per duck (versus the 1 square foot that is usually recommended for chickens).

Your chicken nest boxes can be placed on the floor of the coop, though ducks are notoriously resistant to using them. Ducks are larger on average than chickens, so the nest boxes may need to be enlarged a bit to entice them in. The minimum for a duck is 14 inches by 14 inches, but bigger is always better. Ducks often just nest on the floor of the house, which should be covered with straw to prevent the eggs from breaking. Sometimes, the eggs just pop out while they’re walking around outside.

Make sure ducks can access the coop! They are bigger and less nimble on land than chickens, so make sure the door is wide enough. Again, 14 inches square is the golden number to provide room for a duck. Chicken coops are often built with an entrance off the ground that the birds hop and flap their way into, but that doesn’t work with ducks. If that’s the case, install a ramp that’s at least as wide as the door to provide access. The ramp should be gently sloped, so the ducks don’t slip with their wet feet. Add traction by nailing thin strips of wood horizontally to the ramp.

Finally, ventilation is critical for a duck house. Ducks are often wet when they come in the house, their poop is wetter than chicken poop and they are known to add a lot of moisture to the air in the process of respiration. All that moisture needs a way out, and vents near the top of the house are the best way to release it. Chicken coops are generally built with ventilation in mind (to prevent overheating), but you may want to expand the vents or add more. Always staple wire mesh over the vents to keep predators out.

Ducks don’t need much inside the coop; just a soft layer of straw will do. With chickens, food and water are often provided inside the coop, but for ducks, it’s best to keep those outside. Ducks require water whenever they eat in order to keep their mucous membranes moist and to rinse out food that gets in their nostrils, which are located on the sides of their bills. The problem is ducks splash their heads around in the water in the process of cleaning after each meal, and this makes a big mess inside the house.

Technically, ponds aren’t necessary for ducks. A bowl of water big enough to get their bill wet is sufficient to satisfy their basic survival needs when it comes to water. But they are much happier if they can splash around, even if it’s just in a kiddie pool. And, if you want ducklings, you need a body of water – mating occurs only in open water.

Most chicken coops are surrounded by a chicken run, so when you’re making the transition, you’ll need to configure the space to support the aquatic desires of your ducks. There is just one golden rule: locate the duck house on the uphill side of the duck run and put the water feature on the opposite, downhill side. That way, all the water they splash out of the pond drains away from the area they’re waddling around in all day. Surround the pond with a little beach of pebbles and cover the rest of the run with sand to keep it from turning to mud.

Kiddie pools make an instant, low-cost duck pond, but an old bathtub or horse trough will also do. Ducks tend to tear holes in the rubber pond liner that’s sold for backyard water features, but a concrete pond is ideal if you have the skills to build it. You’ll need to empty the water daily and replace it to keep it fresh and clean for the ducks, so make sure you’ll be able to dump the water feature or have a drain. It’s also important to create a ramp into and out of the water feature if its sides are not gently sloped.

Because of their affinity for water, ducks are even higher maintenance than chickens. Rinse out their water basins daily and replace the bedding in their coop once or twice each week to keep it from getting moldy. Food should be available at all times outside the coop.

As with chickens, the ducks should be locked safely inside their house each night when the sun goes down and let out again in the morning. If you’re converting a chicken coop, all the necessary features to keep your ducks safe from predators should already be in place. The house should have a solid floor and a ‘safety’ latch on the door (raccoons can open most other latches). The duck run also needs to be designed to keep out predators, with a fence that extends at least 1 foot below ground to keep animals from burrowing their way in. You’ll also need bird netting overhead to discourage raptors from swooping down to nab a meal.

If you really want to make your ducks happy, dig a large pond, mount your chicken coop-turned-duck house on a raft and anchor it out in the middle. A moat around the duck house will discourage most four-legged predators and the ducks will be in their natural element.

Hi,
how do you make the ducks go into their coop? I can only get mine in, if I put their food in there and often times not even then do they go inside. They prefer to stay in their pond.

Have 2 ducks: 1 male mallard & 1 female muscovy. Currently have old wooden duck house, left by previous owner. It is rotting as it sits on the edge of our pond. Need to replace. Prefer something that requires minimal maintenance (both my husband and I have full-time jobs requiring travel), but access to clean and, if possible, eggs. Want to provide nesting and protection from severe weather. As much as I dislike plastic, it may be the best but due to winds of 35-50 mph, need to anchor it too. Any suggestions?

I have a chicken run with a few young ducks no eggs yet I tapped into a natural spring, I cut a 1”x 3” slot for them to drink from in the top of the 11/2” pipe, is this enough water for them?