The latest incident took place early last week about 45 minutes north of Elko, in the northeastern part of the state. A cow was shot to death at close range, according to Flint Wright, the animal industry administrator for the Nevada Department of Agriculture, the agency investigating the crimes. The shootings have occurred in rural […] 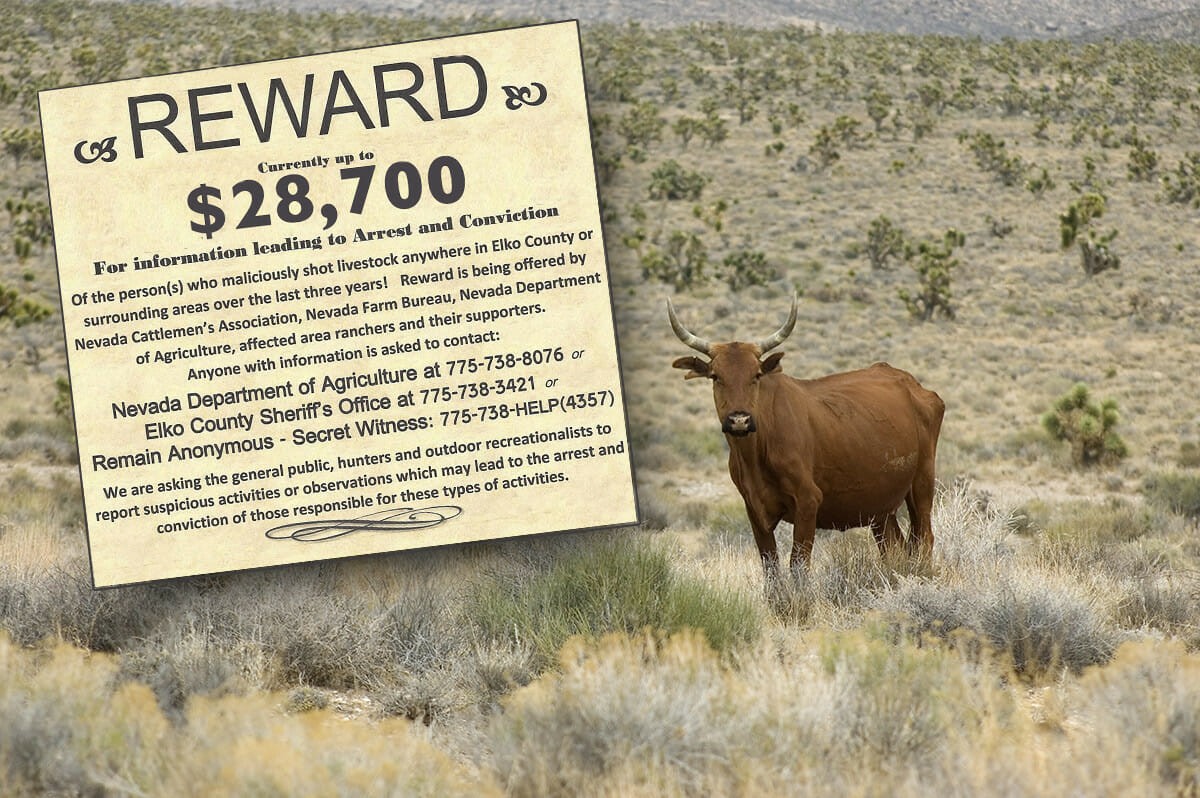 The latest incident took place early last week about 45 minutes north of Elko, in the northeastern part of the state. A cow was shot to death at close range, according to Flint Wright, the animal industry administrator for the Nevada Department of Agriculture, the agency investigating the crimes.

The shootings have occurred in rural areas and are believed to happen around nightfall.

The Associated Press reports the shootings have taken place over a large area, reaching from the center of the state near Winnemucca to 60 miles from the border with Utah.

“Cattle shootings are nothing new and unfortunately have been going on for several years,” says Ron Terrell, the president of the Nevada Cattlemen’s Association, in an email. “This shooting is one of many over the past several years on multiple ranches.”

But it seems to be escalating. Since last summer there have been 24 cattle shot and eight killed.

The shootings in the Elko area began in the early fall of 2014, says Wright in an email. Last September, four head of cattle were killed, and 14 others wounded by gunshots near the city.

“At this time four separate ranches have been affected,” says Wright. “Some of the cows have been shot multiple times, with several different calibers of firearms being used. We don’t know if this suggests more than one perpetrator. It seems likely it would, but it is not uncommon for people to own several calibers of firearms in northern Nevada.”

He says investigators have “a couple of possible persons of interest, but no suspects as of yet, and the motive is unknown.”

One problem in tracking down the shooter has to with the fact that 87 percent of land in Nevada is under federal management and is generally highly remote.

They’re hoping an increased reward of $28,700 for information leading to the arrest and conviction of the perpetrator or perpetrators will help. The money is being put up by the Cattlemen’s Association, the Nevada Farm Bureau, the Nevada Department of Agriculture and area ranchers who have had their animals shot.

Wright says there are two separate criminal charges – animal cruelty and destruction of property – they will be seeking when whoever is responsible is caught.

“If convicted of the felony versions of both charges, the perpetrators would see three to six months of jail time and a minimum fine of $2,000,” he says.

The various organizations involved say they “are confident the perpetrators of these senseless acts of cruelty will be caught.”