Does Barry Estabrook still eat bacon? It's a question that he'll likely be getting a lot following the release this week of his latest book, "Pig Tales: An Omnivore's Quest for Sustainable Meat," which looks at the good, the bad and the truly ugly facets of the American pork industry. 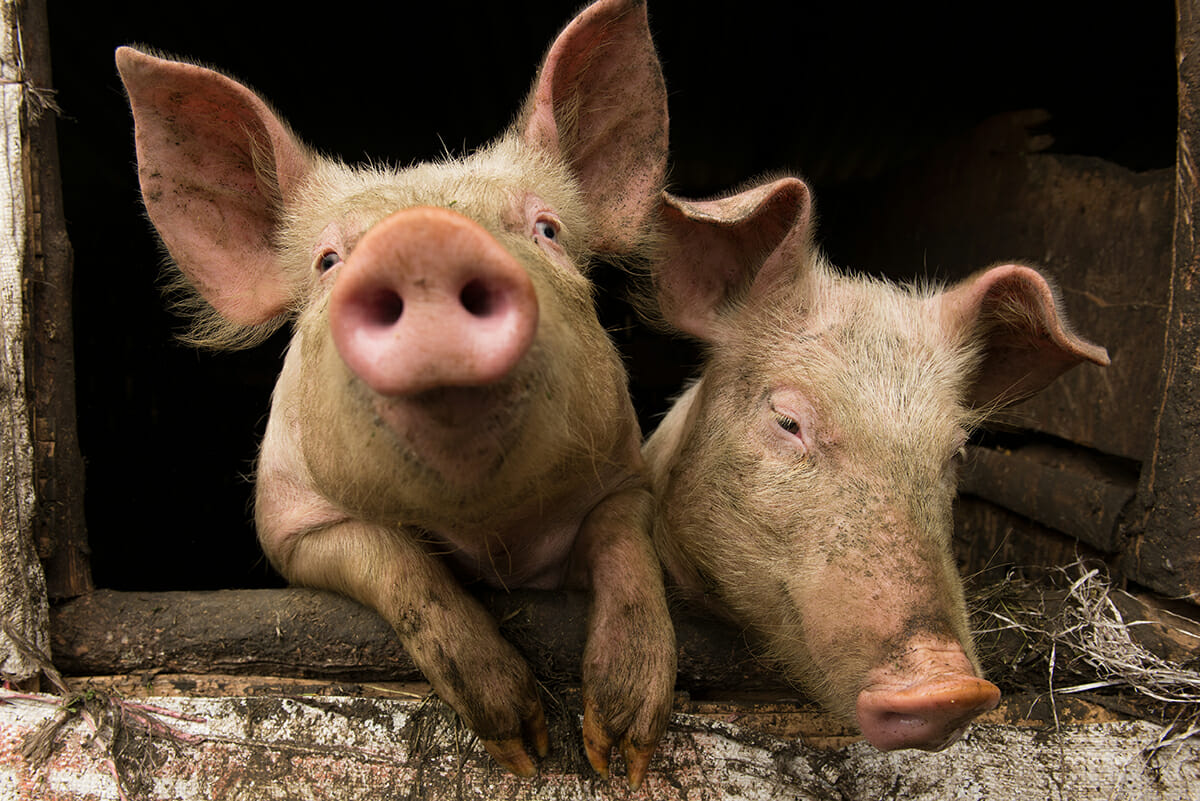 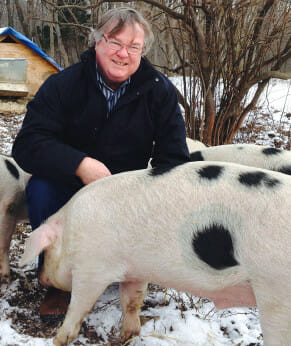 “I still eat bacon, yes. The big change is – and anyone who has tried pastured pork will say the same thing – it makes it almost impossible to go back to [factory farmed pork] just from a gastronomic point of view, let alone animal welfare and the environmental questions. Luckily, it’s getting easier and easier to find really good pork,” Estabrook tells Modern Farmer in a phone interview from his home in Vermont.

He says he has always been interested in food production, but turned to writing about the subject after realizing the hardships that kind of life include. He worked at a dairy farm during his high school years and as a commercial fisherman off Nova Scotia following college. His impression of these two jobs: “miserable.”

“I spent most of my early years in Ontario. I moved down to Vermont in the late 1980s as the founding editor of EatingWell magazine,” says Estabrook, who still speaks with a Canadian accent. His dry wit is perhaps also a vestige of his Canadian upbringing. For a decade, he was a contributing editor at Gourmet magazine, mainly writing about how food is produced. When the magazine closed in 2009, he continued to write about food production as a freelancer. In 2011, he published “Tomatoland,” a book about industrial tomato production.

The premise of his latest book, “Pig Tales,” is simple. Estabrook sets out to find as much as he can about pigs, from their history with humans to how they think, to how they are raised and slaughtered, in both the traditional manner and in large-scale industrial models. While the premise may be simple, what he discovered was a complex system involving powerful agribusiness and pharmaceutical companies, kowtowing government officials and farmers who have been told the only way to raise pigs is through factory farming. He says this has resulted in the animals, workers, the environment and consumers suffering so corporations can make more money.

Estabrook says “that given the environmental impact of food production” people should understand what their food choices mean and that “there’s a vast difference between a pork chop that comes from a pastured, local pig and one that has been raised in a cage with thousands of others out in Iowa.”

He got interested in the subject “seven or eight years ago” after eating his first pork chop from a pasture-raised, heritage-breed pig.

“I was blown away. I absolutely had no idea that any pork could taste so good and be so different than “the other white meat” (a reference to a pork industry ad campaign started in the 1980s). I mean, it was anything but that. From there, I just decided, ‘let’s compare those to the industrial pig and how it’s raised’,” he says.

As he got deeper into the subject, he began to feel that we owed it to pigs – he calls them “miracle animals” – to learn more about them.

“I knew pigs were smart. I had no idea of just how smart they are. They’re as smart as 3-year-old kids. They can be trained to successfully play simple computer games. They can do a lot of things that researchers thought were limited to humans and the great apes until quite recently,” he tells Modern Farmer. “To think about this type of animal forced to live under the conditions they are in a confined factory farm makes me shudder.”

“You know, if muck needs to be raked, I guess I have as good a pitchfork as anybody. I think American big agriculture and the big retail food industry goes out of its way to hide what it does from consumers. I think they are quite happy to have consumers being virtually illiterate when it comes to food,” he says.

He admits he’s been called a “muckraker” on more than one occasion and doesn’t mind the comparison with the reform-minded journalists who, beginning at the turn of the 20th century, tried to shine a light on political and corporate corruption and societal ills.

“You know, if muck needs to be raked, I guess I have as good a pitchfork as anybody. I think American big agriculture and the big retail food industry goes out of its way to hide what it does from consumers. I think they are quite happy to have consumers being virtually illiterate when it comes to food,” he says.

Some of what Estabrook says he learned while researching his book shocked him, including how some United States Department of Agriculture inspectors were mistreated by their superiors for doing their job by reporting “things like feces or puss from abscesses on the meat” at large slaughterhouses. He says they “were transferred to jobs two hours away and it made it impossible for them to live and work.”

Estabrook was also appalled by how a company called Premium Standard (it has since been bought by a large Chinese conglomerate) continued to lose court battles against small groups of rural residents and instead of cleaning up its behavior considered the multimillion-dollar fines “part of doing business. You’ve been found guilty, you’re paying millions and millions in settlements and what did you learn from this? Nothing. I believe that to this day nothing has changed. They continue polluting.”

He says it “comes down to the power of big agriculture and big pharmaceutical, in the case of some therapeutic antibiotics.” According to Estabrook, the practice of feeding low levels of antibiotics to livestock in order to boost their growth and prevent diseases in overcrowded conditions is helping to weaken the effectiveness of these drugs to fight infections in humans.

“They’re destroying the most important category of drugs to come out of the 20th century for a few cents a pound savings in their meat production costs. It’s nothing but money,” he says.

While working on the book, Estabrook also found farmers, citizens, lawyers and others who have stood up to the big monied interests, including Kenny Hughs, a former employee of a large farm who became a whistleblower at great personal risk, and Russ Kremer, a Missouri pig farmer who turned away from industrial farming in order to pasture-raise his animals.

In Hughs’ case, it was the mistreatment of one sow who was left to slowly die that led to his quitting a high-paying job in an area of Missouri where these types of careers are few and far between, according to Estabrook.

“He just finally couldn’t stand how they were treating this one sow in particular, and this is a guy whose main hobby is hunting raccoons at night with dogs. He’s not a PETA (an animal welfare organization) shrinking violet, he’s a tough, rural character, and he couldn’t stand the way they were treating the animals anymore, so he gave up this fantastic job. I really respect the guy because he put his morals, his ethics, before his career,” says Estabrook.

Kremer, known as the “Pope of Pork,” formally practiced confined animal system farming, but after nearly dying from an antibiotic resistant infection caused by a boar that gored his knee, he returned to the older method of pasturing his pigs.

“Now he’s running this Ozark Mountain Pork Cooperative where between 80 and 100 like-minded people, mostly reformed industrial farmers, have joined this cooperative to market their meat in the midwest. It’s just a fascinating viewpoint that he has since he’s done the whole thing. He studied animal husbandry at an ag school and came back totally believing in confined animal system farming. He has now swung back 180 degrees [to traditional farming methods].”

“They’re not little hobby farms. These guys raise well into the thousands of pigs on average. It certainly can be done. It’s only been the last 30 years that anyone on a large scale would think of raising pigs in any other way other than pasture,” he says. “It can be scaled up and I think it’s going to have to be. You can’t have an industry that goes on abusing the environment, abusing the animals, abusing the workers forever.”

With his newest book done, Estabrook is mulling over what he’ll be writing about next. He says he has a few ideas he’s working out, but has yet to settle on which one to pursue.

“It will be about food production. It won’t be about lettuce,” he says with a laugh, dispelling the rumors he is working his way through the makings of a BLT sandwich with his writings. 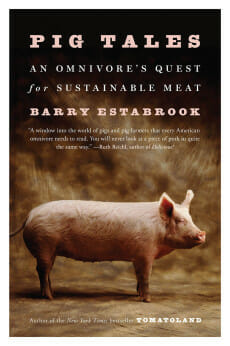