In Virginia, NASA DEVELOP recently completed two projects in conjunction with the state government. The first looked at water efficiency in the state’s agricultural sector while the second was designed to help with the growth of the state’s wine industry. The water project, “Coastal Mid-Atlantic Water Resources III,” used two of NASA’s satellites in conjunction […]

In Virginia, NASA DEVELOP recently completed two projects in conjunction with the state government. The first looked at water efficiency in the state’s agricultural sector while the second was designed to help with the growth of the state’s wine industry.

The water project, “Coastal Mid-Atlantic Water Resources III,” used two of NASA’s satellites in conjunction with aerial drones to provide groundwater observations within the state’s coastal aquifer region and also looked at the water usage of crops at the surface level, according to Michael Finneran, a media representative for NASA’s Langley Research Center in Hampton, Virginia. 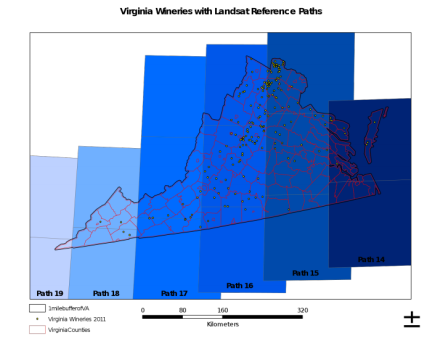 “This project was led by [state] Secretary of Natural Resources Molly Ward, who was interested in expanding the commonwealth’s efforts to better measure and manage the coastal aquifer system,” says Finneran in an email.

They were able to estimate evapotranspiration (the sum evaporation from the land surface plus transpiration from plants) using NASA’s Landsat 8 satellite, which will help them get a better understanding of how often farmers need to irrigate their fields. The goal is to decrease water waste and lower costs, according to Finneran.

A second project, “Virginia Agriculture II,” a collaboration between NASA and the Virginia Wine Board, which is part of the state Department of Agriculture and Consumer Services, mapped all the acreage of the state’s vineyards with the help of NASA satellites.

The state’s wine industry generates about $750 million a year. It supports close to 5,000 jobs and is one of the fastest growing agricultural sectors in the state, according to a 2012 economic impact study. One of the challenges for the industry, says Virginia Secretary of Agriculture and Forestry Todd Haymore in a media statement, is to increase fruit production in order to stay ahead of wine demand.

“Through this research project, we now have a better, more accurate count of vineyards throughout the commonwealth,” says Brian Coy, a spokesman for the Office of Governor Terry McAuliffe.

Beyond this, says Coy, Virginia will have a better idea of where more vineyards can go in the future based on “location data with information about the soil, slope of the land, angle of the sun and frost dates.”

“The projects were carried out at no cost to the Commonwealth of Virginia and other partners,” say Finneran. “NASA paid the competitively selected project participants a modest hourly rate to implement the project and share their results.”

NASA DEVELOP, which launched in 1999, collaborates with a number of academic, non-governmental and regional organizations on projects ranging from mapping and modeling the spread of invasive species to providing data to boost hazardous weather notification systems, and employs young professionals to do the research. The program is centered at NASA’s Langley Research Center and has regional hubs throughout the country, as well as an international center in Kathmandu, Nepal.

As for NASA’s work with Virginia, there are also discussions about a possible forestry-related project, according to Finneran.

“There are no [new] crop or animal agriculture projects currently planned, but DEVELOP and the commonwealth are always on the lookout for great new ideas,” he says.