More than Honey may cover familiar territory, but this 95-minute film is generally hailed as the most comprehensive on the topic and has the distinction of being nominated for a 2013 Oscar for Best Foreign Language Film. 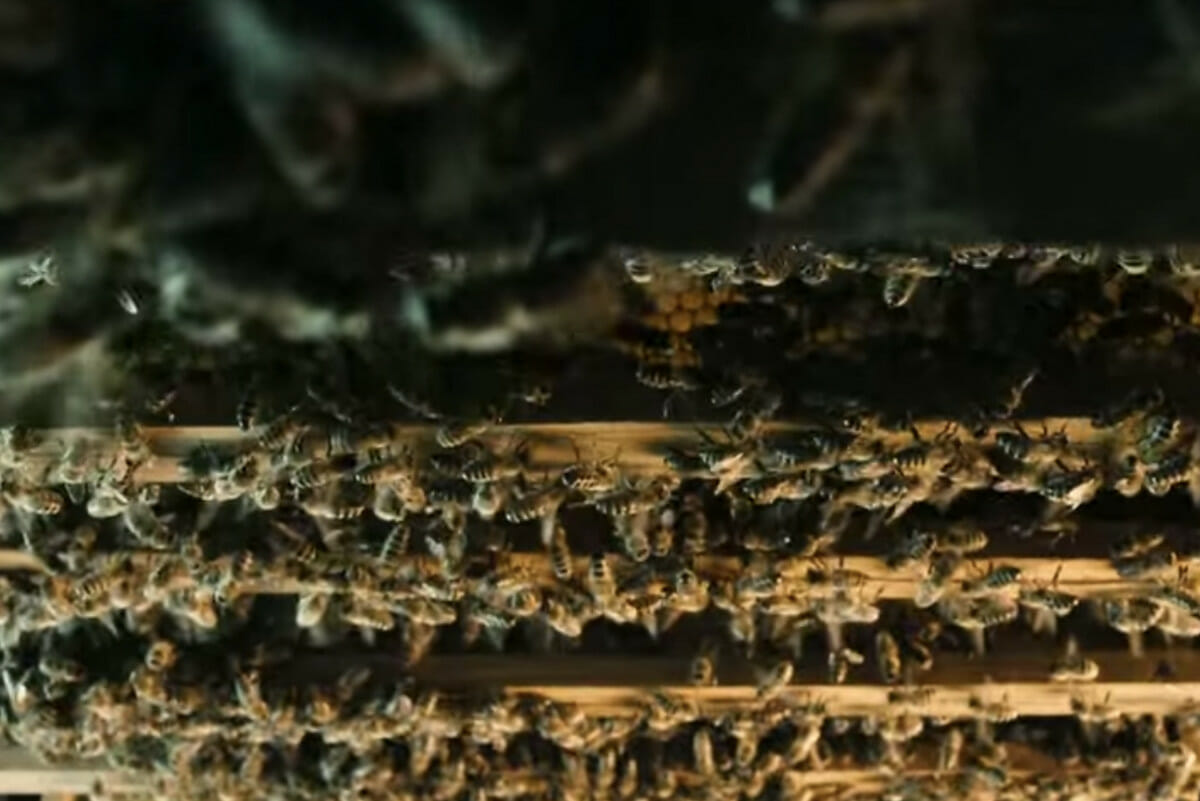 Thanks to countless news articles and a spate of documentaries on the baffling disappearance of the domestic honeybee, most of us have heard about bee death, Colony Collapse Disorder and the grave prospect of extinction.

More than Honey may cover familiar territory, but this 95-minute film is generally hailed as the most comprehensive on the topic and has the distinction of being nominated for a 2013 Oscar for Best Foreign Language Film. It doesn’t take long to figure out what sets this film apart: It is visually stunning.

Let’s start with the landscapes. The filmmakers take us to the wildflower meadows in the Swiss Alps and blossoming orchards throughout the U.S. where crates of domestic honeybees are released to pollinate away. We glimpse craggy rock cliffs in the Australian outback, mesquites in the desert Southwest and take a trip into the ravaged almond orchards in China, where honeybees actually have become extinct.

The most impressive footage, however, takes us on an up-close and personal tour of the hive.

Using high-speed cameras and amazing microphotography, director Markus Imhoof shows us bees in all their mysterious glory. Here, we watch these strange creatures communicate through precise movements and perform their duties according to the strict laws governing a honeycomb. We watch them fly, dance, groom themselves, copulate, swarm and, in one poignant moment, struggle and die in cloud of fungicide. It’s a totally alien world – and one that may be hard to sit through if bees creep you out.

We also see the range of factors contributing to bee death. An old-timer whose family has harvested wild honey for generations spends his days chasing off intruders from weaker species that may breed with his genetically hardier wild black bees.

His alpine meadows are a stark contrast to the reality of present-day commercial honey production, where a conveyer belt-style machine extracts honey. The process may be more efficient, but it’s also automated and ugly. A nearby beekeeper sounds defeated as he tells the camera: “we’ve lost our soul.”

Imhoof interviews a handful of scientists who, oddly enough, seem to be more focused on bee behavior than CCD. They ponder esoteric questions like “Is a mind as small as a bee’s capable of imagining two outcomes?” or “Is the hive the real super-organism, while individual bees merely function like leaves or cells?”

Meanwhile, all honeybee wranglers want to know is why their bees keep vanishing. They haul their hives cross-country to rent out for crop pollination, only to pry open their bee houses and find piles of tiny carcasses.

Transporting bees from crop to crop leads to mites and viruses that cause systemic breakdowns. To counteract this, the majority of beekeepers spike the sugar water that replaces honey with antibiotics and other drugs.

“I’m getting real comfortable with death on an epic scale,” says one beekeeper, as he discovers he’s lost another hive. It’s disconcerting to watch him scrape away the detritus.

That’s just a prelude to the Holocaust-like scenes, where dead hives are burned in a bonfire, or the sight of migrant Chinese workers painstakingly hand-dusting individual almond blossoms with pollen. All the bees in the region are dead, giving us an apocalyptic glimmer of what the future may hold.

To his credit, Imhoof wastes little time pointing fingers at the possible culprits. Yes, the CCD is probably due to pesticides, mites, antibiotics, transportation, genetic inbreeding or stresses – but that’s beside the point. The simple fact is this: When bees are domesticated, they fail to thrive.

“The massive death of bees is no mystery,” explains the narrator. “They are dying as a result of our civilization’s success, as a result of man, who has turned feral bees into delicate domestic animals, wolves into poodles.”

In other words, the root of the problem is that we domesticate bees. So is there hope? Indeed there is – and it comes in the form of Africanized honeybees, aka the killer bees that have gotten a bad rap ever since several original swarms escaped from a Brazilian lab and migrated into the U.S.

Unfortunately, Africanized killer bees have a major PR problem. Contrary to what you may have heard, they aren’t especially vicious; they do make honey and pollinate crops. They are stronger and fiercer than their docile cousins. They refuse to live in bee houses, preferring to build their own hives in the wild. Maybe Africanized honeybees are meaner than the average domesticated bee, but maybe we deserve it if we refuse to let them do their own thing.

“More than Honey” isn’t especially preachy. It flits around, more somber than self-righteous. Imhoof shows – rather than tells – us about bees, and he uses spectacular close-ups to make his argument. You may not learn anything new, but don’t be surprised if you get the urge to plant some bee-friendly flowers.

Rating: Unrated, but bee close-ups may be disturbing to some.
Where to Watch: Streaming now on Netflix, available for purchase on Amazon, iTunes and website.