Visually stunning abstract qualities in the photographs of Kacper Kowalski that are more like paintings than moments captured on film. 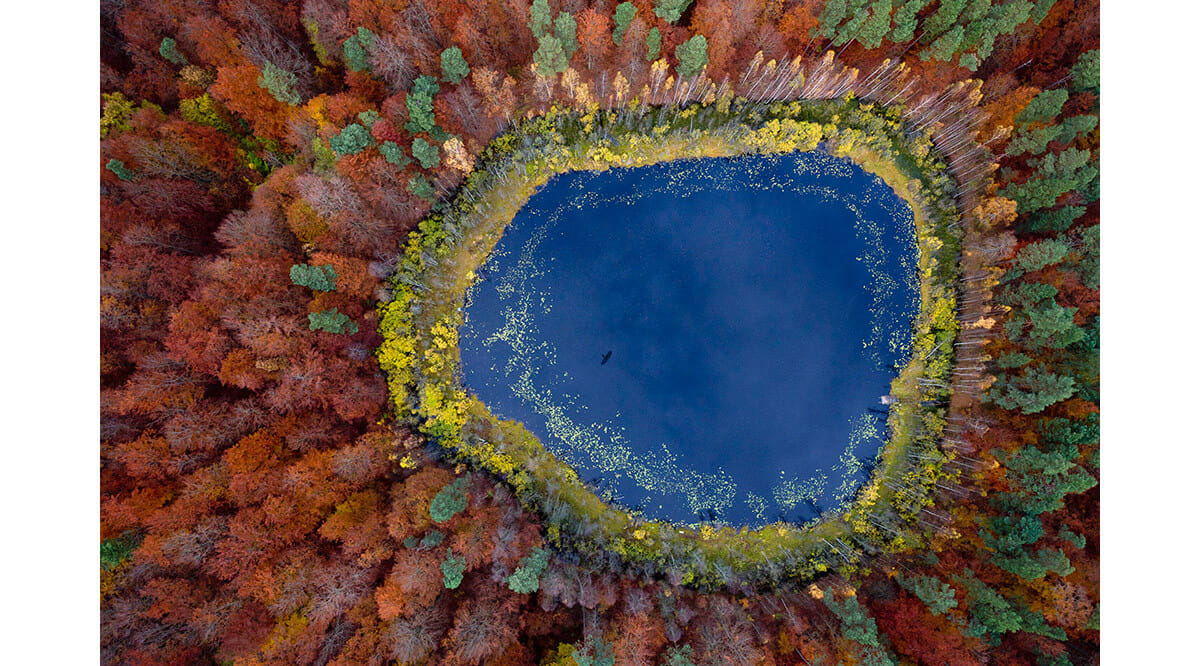 Kowalski’s work often explores the collision of man and nature, but always from a great distance. It is this distance that is the key to reeling the viewer into the work. It takes time to realize that in one of his photographs, the veinlike shades of grey and blue and streaks of orange bleeding into a deep emerald green are in fact the effects of environmental damage seen from 1,500 feet up, not just a gorgeous abstract composition. Kowalski shoots his photographs from a paraglider or gyrocopter using a digital SLR camera and captures the effects wrought by us on the natural world. 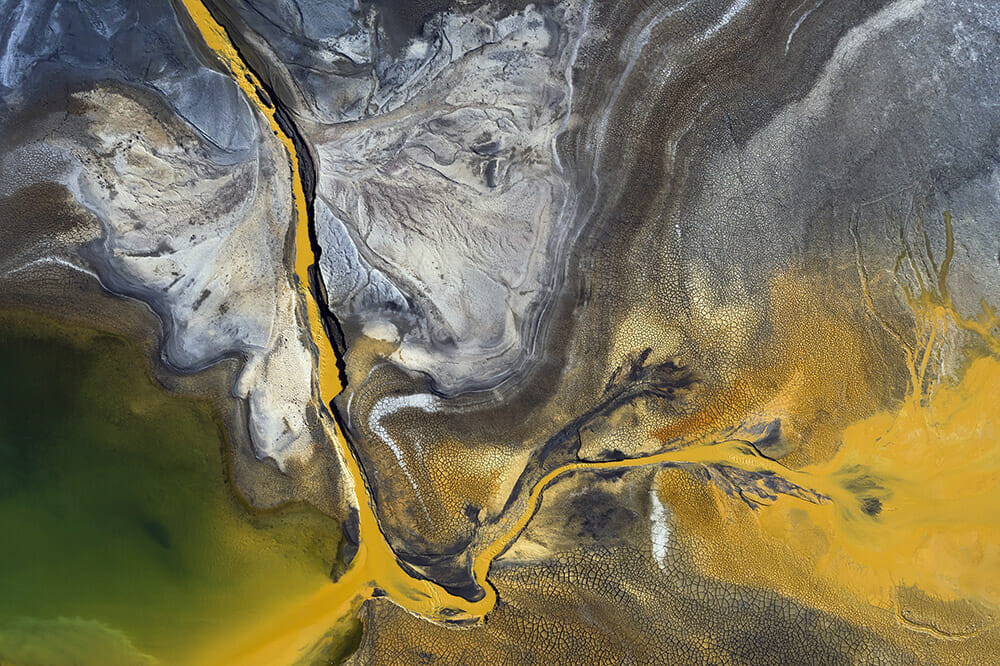 This technique could seem hokey in the hands of a less talented artist, but Kowalski makes it work, thanks to his eye not just for the overall composition, but for striking details that slowly reveal themselves.

Bill Shapiro, the curator for Kowalski’s first American exhibit, which opens April 22 (Earth Day) and is being held at the Curator Gallery in Manhattan, says Kowalski’s pictures, while “often appearing abstract and without contextual clues, create an emotional tension seldom seen in aerial photography.” 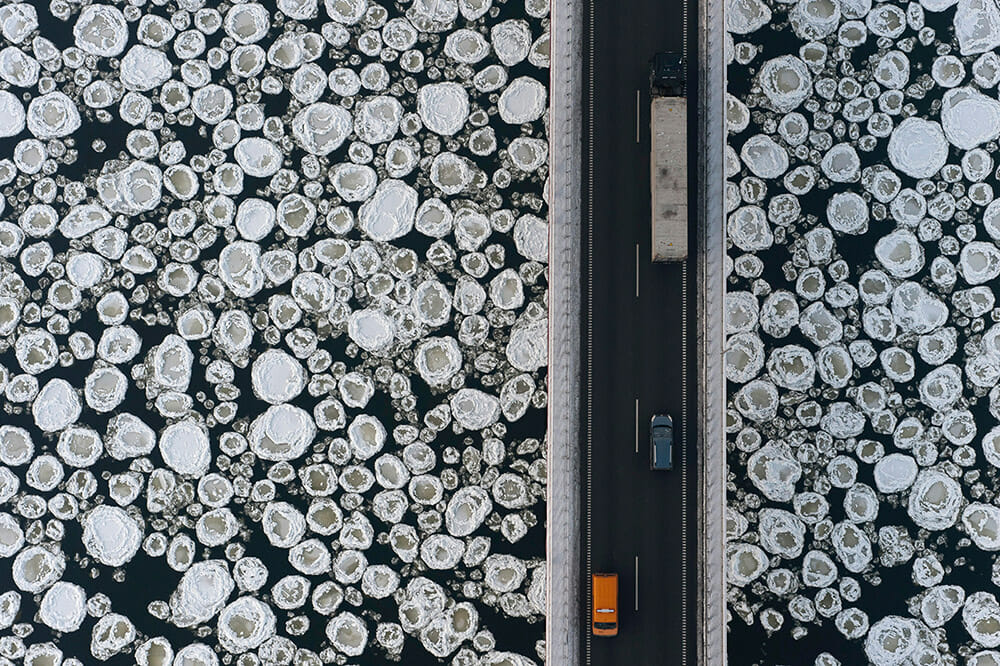 The road through the ice: On the Floe #4

For the series “Toxic Beauty,” in which Kowalski photographed industrial activities such as mining, the artist says it was curiosity that led him to the “forbidden spaces” that he captured on film. The only way to see and photograph the activity was from the sky, since “nobody will allow you to go there,” says Kowalski. Additionally, flying over the spaces was the only way to get a sense of the scale of the activities below. He says many of the photographs document how “everyday products” like salt and coal are produced, just on a “different scale.”

In Kowalski’s other photographs, the relationship between humanity and the natural world is less clearly defined in terms of a power struggle, but still revolves around the meeting of the two. 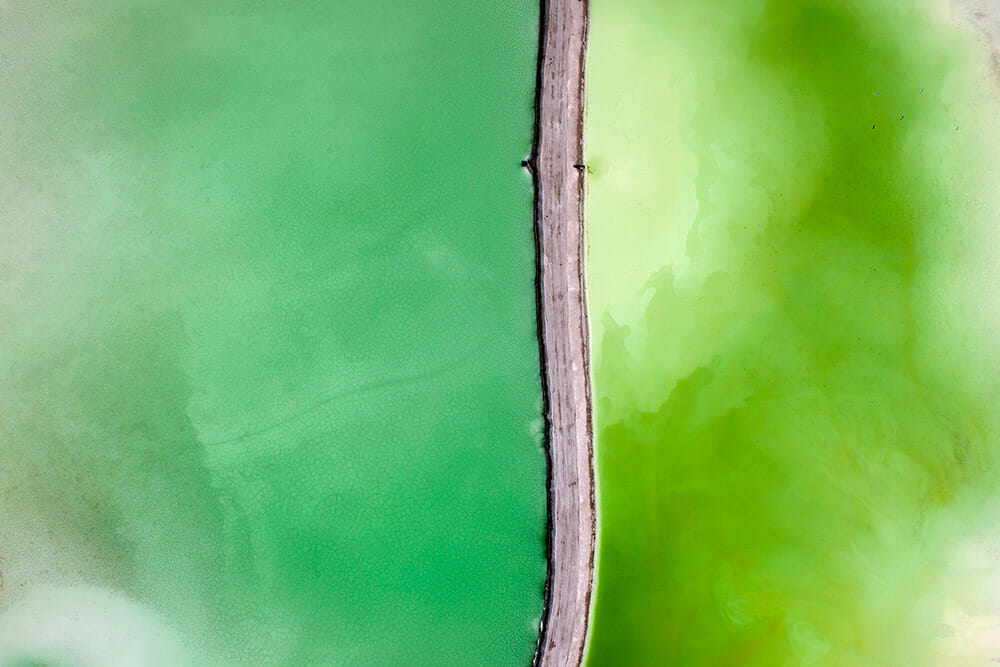 The green with the road: Toxic Beauty #14

“The evaluation of whether the tension between nature and civilization is positive or negative remains with the person who interprets the picture,” he tells Modern Farmer.

The show, Above & Beyond, runs from April 22 to May 30 at The Curator Gallery, 520 W. 23rd St. New York, New York. Go to the gallery’s website for more information or to Kowalski’s website to view more of his work.

Popular
7 Smokable Plants You Can Grow That Aren’t MarijuanaBrian Barth
A Once-Forbidden Fruit Makes a ResurgenceShelby Vittek
OSHA fines Poultry Companies $1 Million after Deaths of Six WorkersDan Nosowitz
6 Differences Between Llamas and AlpacasAndrew Amelinckx
Vegetables Aren’t Always VeganEmily Baron Cadloff
Explore Modern Farmer
Related
Food & Drink, Travel
Hit the Food Trails This SummerEmily Baron Cadloff
Food & Drink
Happy 50th Birthday to the Berkeley Restaurant that Launched Farm-to-Fork EatingPaul Freedman
Lifestyle
10 Books about Food and Farming to Read This SummerShelby Vittek
Animals, Plants
Q&A With ‘Defending Beef’ Author Nicolette Hahn NimanShelby Vittek
wpDiscuz
We use cookies on our website to give you the most relevant experience by remembering your preferences and repeat visits. By clicking “Accept”, you consent to the use of ALL the cookies.
Cookie settings ACCEPT
Privacy & Cookies Policy