One of us is asthmatic and the other a smoker so we are both huffing along, mentally preparing for the hike. Over the past five weeks our crew of 14 put in 80,000 tree taps across the 1,000 acres we have in Cambridge, Vermont, and the smaller sugarbush we manage in Fairfield, Vermont. Since then […] 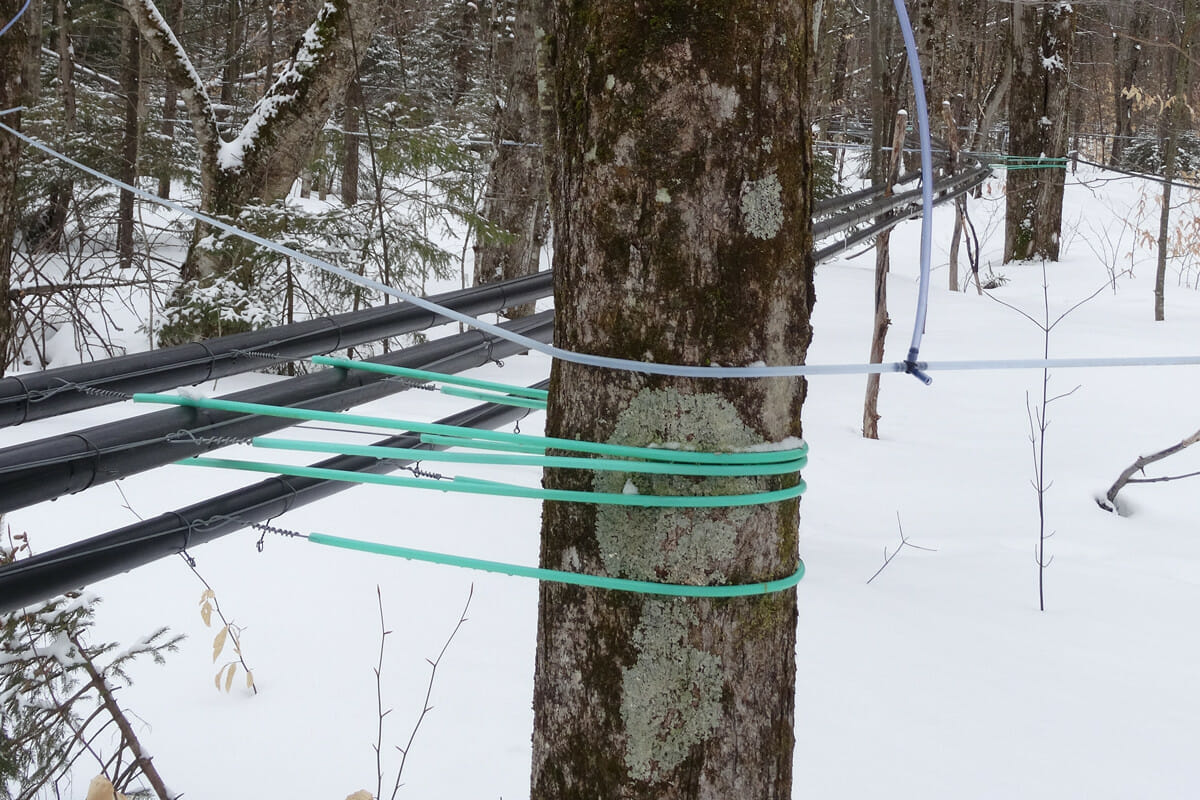 One of us is asthmatic and the other a smoker so we are both huffing along, mentally preparing for the hike. Over the past five weeks our crew of 14 put in 80,000 tree taps across the 1,000 acres we have in Cambridge, Vermont, and the smaller sugarbush we manage in Fairfield, Vermont. Since then we have been waiting for the temperatures to rise above freezing, which will get the sap flowing. Today is the first day the forecast looks promising. I glance at my watch at 8:15 a.m. and note that even though it is close to 40 degrees, the taps are still dry.

There are more than 700 miles of tubing in our operation, most of it in steeply sloped terrain on the western side of Mt. Mansfield. The tubing carries the sap from the taps in the trees directly to the sugarhouse (the building where sap is boiled into maple syrup). To keep pressure in the network, the entire system is under vacuum. Keeping that vacuum is tricky because during the year squirrels chew on the lines, trees fall on them and the wind wreaks havoc. All of these holes and breaks decrease the level of suction and lowers production. Given we only have about six weeks to make an entire year’s income, the system has to be in full working order during the sugaring season so we can use every last drop the trees are willing to put forth. Therefore, once we are tapped, the full focus of the woods crew is to make sure the tubing network is tight. We call it ‘walking the lines,’ and once the sap starts flowing, this is what the crew does, dawn to dusk, sometimes seven days a week. As I walk further down the line, I hear the mourning doves for the first time since last fall”“a good sign that spring has come”“but still no sap.

Shane showed me how to find leaks and we have gone separate ways in the woods. I struggle through the snow, cursing myself for not bringing my snowshoes. Up until this week, the snow has been so deep and fluffy that snowshoes were more of a hindrance than a help. This has been the second-coldest winter on record and while tapping in January and February it was a struggle for everyone to regulate body temperature. Keeping fingers and toes warm is always a challenge but slogging uphill in deep snow invariably results in a sweaty core. Today the temps have caused the snow to pack down a bit, but I still fall in up to my thighs and I am expending a lot of energy for very little progress. A vacuum gauge at the beginning of the line has revealed that there is a leak somewhere in this section. As I walk the line, I have to stop and carefully listen for a telltale “hiss.” So far, nothing. It is 9:45, I can’t find the leak and the sap is still not running. As a distraction, I think about what I will make for crew lunch.

Crew lunch has been a tradition on our farm since I started growing vegetables commercially here in 2001. Once a week I would head in early from the fields and make a feast, using whatever was popping up from the ground. Before moving to Vermont, I attended the French Culinary Institute in New York and worked in a few restaurants in the city. Though I didn’t miss the frenzy of a professional kitchen, I missed cooking good food for a crowd. Making lunch for the farm crew fulfilled that need and let me flex my culinary chops. In addition, cooking at the height of summer abundance was a pleasure because at least half of my employees were vegetarian, most were women and they all had palates for exotic cuisine (you could call them proto-hipsters). I would gather a big basket of whatever was ripe and make an Ethiopian curry, an enormous French Salade Niciose or an elaborate Spanish tapas platter with 12 different components. Everyone loved it.

When we switched from vegetable farming to the maple operation in 2009, I stepped back from the daily activities of the farm to take care of our young children. My husband, Eric, ran the show and a whole new crew came in to work in the woods; mostly male, decidedly not vegetarian. That first year Eric asked me if I would continue with crew lunch and I was happy to have something to contribute. I fussed over the menus and tried to produce something exotic and gourmet every week. The guys were happy to have a hot meal but I couldn’t quite tell if they really loved it.

I don’t get to go out with the woods crew very often. I have other commitments, but between snow days, sick days and general mom duties I do go out now and again. The more time I have spent on the mountain, the more I’ve realized that my approach to crew lunch had to change. It is beautiful up there but it can also be bitterly cold and full of obstacles both natural (downed trees) and technical (finicky 4-wheelers). The cold, the deep snow, the uphill climb and the struggle with equipment – none of these lead a person to crave delicate or fussy food. One wants comfort food at its heavy, familiar and satisfying best: lasagna, beef stew, pulled pork or shepherd’s pie. Also, considering they burn an Olympic athlete’s amounts of calories every day, the more carb-laden and protein-packed, the better. The meal should not be a jaunty trip to an exotic locale, but a warm embrace from a longtime friend. In short, when you are cold, spent and famished, mac and cheese will trump kale whatever any time.

If at first I was miffed about shelving my fancy cookbooks, I am over it. I have spent enough time now with 20 pounds of tools on my back slogging through snow that I get it. Plus, it is not really about me, but about the guys who make our operation possible and work harder than any group of people I have ever encountered. As I make my way down the line I am thinking of taking one of the ideas from the suggestion board in the sugarhouse and making pulled pork with a side of coleslaw and mac and cheese. Deviled eggs always get scarfed down immediately. I will finish with Pudding Chomeur, which is a dessert made of sweet biscuits poached in maple syrup ”“ a specialty from our sugaring neighbors in Quebec. I still haven’t located the leak, but a different, even better sound starts to emerge from the lines. I hear a scraping of slush and then a whoosh of liquid like sputtering from a faucet after a power outage. The sap is finally running. The season has begun.