Directed by Sanjay Rawal and narrated by Forest Whitaker, this 83-minute documentary pivots around the activism of the Coalition of Immokalee Workers (CIW), a group of tomato pickers. 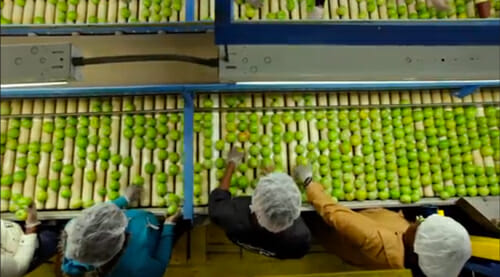 The most haunting food documentaries challenge us to think twice about the food on our plates.

They invite (or sometimes implore) us to consider how and where our food was grown, the effect it has on our bodies and the environment and whether our ignorance benefits corporations who value the dollar above all else.

It also points to fast food chains, restaurants and supermarkets, which tacitly allow the exploitation and abuse of the workers who serve as the lifeblood of the fresh food industry.

Directed by Sanjay Rawal and narrated by Forest Whitaker, this 83-minute documentary pivots around the activism of the Coalition of Immokalee Workers (CIW), a group of tomato pickers.

During a nine-hour shift, a picker is required to pick a mind-boggling 4,000 pounds of tomatoes. For this backbreaking task, he takes home about $40. These workers live well below the poverty line, in shoddy encampments or jam-packed, squalid trailers. They routinely grapple with wage theft and sexual harassment.

What would it take to drastically improve their quality of life? They are asking to be paid one penny more for each pound of produce they harvest.

The workers (as well as Rawal) recognize that farmers are not the villains here. They are merely the middlemen, largely powerless to affect change. Instead, they aim higher on the food chain, placing the blame on food corporations and giant supermarket chains that wield tremendous power over working conditions in the agricultural system.

And what would it take to drastically improve their quality of life? They are asking to be paid one penny more for each pound of produce they harvest.

The film hinges on a showdown between the CIW and Publix, a Florida-based supermarket chain that operates nearly a thousand stores in the southeast U.S. The corporation earns about $2 billion in annual profits and, the film argues, turns a blind eye to the abuses against workers.

In March 2012, CIW workers tried to discuss their concerns with the leaders at Publix, who flatly refused to even meet with them. This rebuff was particularly staggering in the face of a six-day hunger strike held outside their headquarters.

The documentary features comments from actress Eva Longoria (an executive producer) and “Fast Food Nation” author Eric Schlosser. However, the workers themselves tell the most moving and eloquent tale.

“We are demanding a dignified life for ourselves,” says one laborer. Thankfully, the CIW can claim some genuine victories, including the Fair Food Program, which counts McDonald’s, Walmart, Whole Foods and Trader Joe’s on its list of participating buyers.

Rawal uses the Publix standoff to set present-day conditions against a long, disgraceful history of exploiting migrant workers. This is driven home by footage from Edward R. Murrow’s Harvest of Shame, which demonstrates that little has improved since the groundbreaking documentary series originally aired in 1960. Sadly, little has changed in nearly half a century.

Similar scenarios around the country and the globe are also incorporated to show different perspectives. For example, we see garment workers in Bangladesh and Chinese immigrants in the U.K.

Although it befits the circumstances, the film can be heavy-handed at times. Consider grape pickers in Napa Valley, who are shown earning 25 cents per bottle. Their labor is juxtaposed against a group of wealthy but clueless patrons at a charity wine auction, bidding thousands of dollars in the name of farm worker aid.

Food Chains is an exposé with a clear point of view. The message is that migrant workers in the U.S. are trapped in a system that amounts to modern-day slavery. This is shameful and heartbreaking. It’s too easy for consumers to overlook these abuses, the film suggests, or dismiss them as an immigration problem, rather than treating them as human rights injustices.

By depicting brutal present-day realities, Rawal shows us that we are letting history repeat itself. In that sense, Food Chains asks (well, really implores) us to consider how we may be part in the problem. One solution, it seems, is to follow the CIW’s lead by identifying companies that condone unfair labor practices and holding them accountable by shopping elsewhere.

At the very least, few who watch this documentary will ever gripe about the cost of tomatoes again.

Food Chains is now available on Amazon, iTunes and Netflix.

Popular
The Future of Hay Drying in AmericaLindsay Campbell
How to (Actually) Get Rid of Fruit FliesEmily Baron Cadloff
7 Smokable Plants You Can Grow That Aren’t MarijuanaBrian Barth
The Story of Brazil Nuts is Kind of NutsAndrew Amelinckx
When Tractors Invaded D.C.Sam Brasch
Explore Modern Farmer
Related
Plants
There’s a Pumpkin Fungus Among UsLindsay Campbell
MTMF
How One Organization is Restoring a Community of Black FarmersEmily Baron Cadloff
Plants
Organic Soybean Prices Spike Despite Huge US Soybean ProductionDan Nosowitz
Food & Drink
Why Global Food Prices Continue to ClimbAlastair Smith
wpDiscuz
We use cookies on our website to give you the most relevant experience by remembering your preferences and repeat visits. By clicking “Accept”, you consent to the use of ALL the cookies.
Cookie settings ACCEPT
Privacy & Cookies Policy