Don't bother cracking any "Little Shop of Horrors” jokes with the owners of the largest carnivorous plant collection in the world. 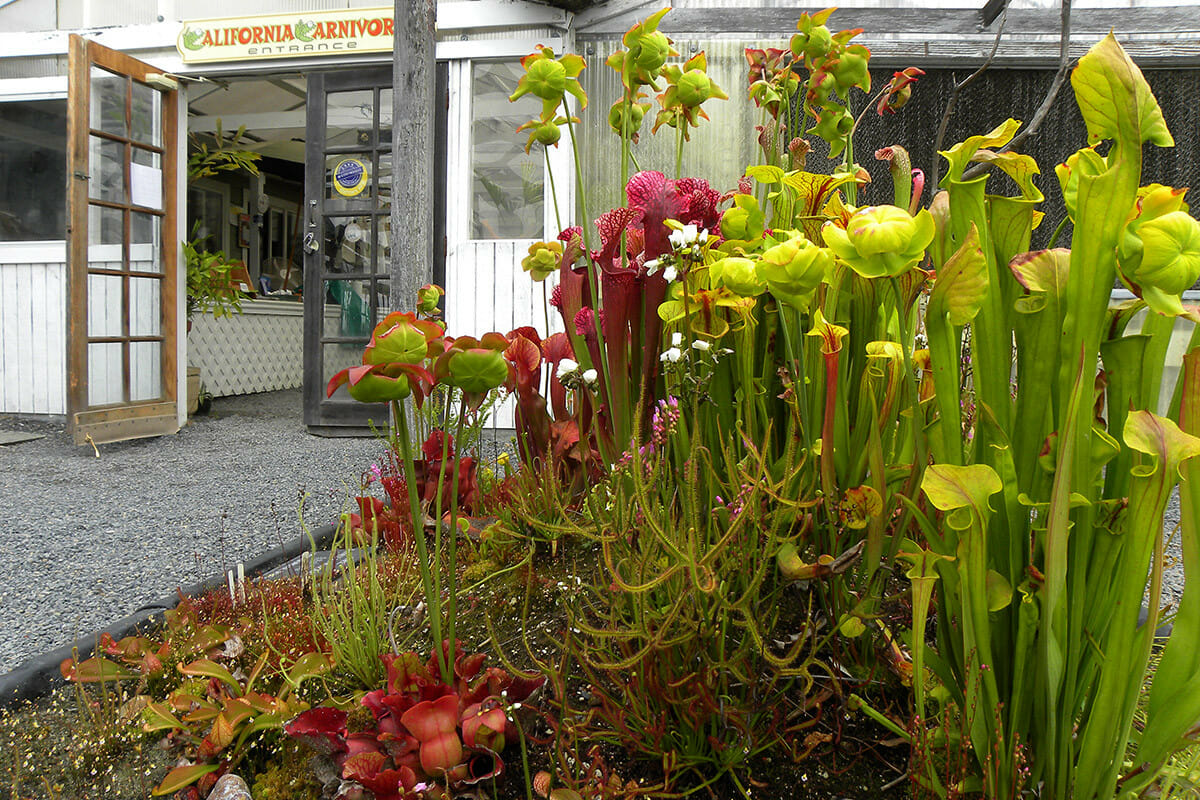 “We’ve heard them all,” says Damon Collingsworth with a sigh. He and his business partner, Peter D’Amato, own and operate California Carnivores, located in Sebastopol, California. The space houses both the largest carnivorous plant nursery in North America and a collection of more than 1,000 types of carnivorous plants.

Carnivorous plants grow in boggy and acidic soils low in mineral salts and other nutrients. They use various methods to trap bugs and other creatures for what’s missing in their diets. Among these plant species are Venus flytraps, American pitcher plants, sundews, butterworts and bladderworts, as well as tropical pitcher plants.

What the heck do you feed these little critters?

While in “Little Shop of Horrors,” a flower shop owner’s carnivorous plant required humans as sustenance and also voiced his desires – “Feed me, Seymour” – the plants in D’Amato and Collingsworth’s collection only require insects. They don’t speak – or sing, although some of the plants’ tricks for getting insects and even small frogs to become their supper are horror movie-esque.

Pitcher plants have nectar that drug their prey, who “get drunk” and eventually “topple on in” to the plant, where they are slowly consumed, says Collingsworth.

The outside plants in the collection subsist on the various insects drawn to “sweet nectar,” including yellow jackets and ants. The plants that are kept inside are fed a small amount of fertilizer since bugs aren’t as plentiful. Collingsworth says they have to be careful how much fertilizer the plants get because they are sensitive to minerals. The plants only tolerate either distilled or rainwater for the same reason. He says that contrary to popular belief, most carnivorous plants aren’t from tropical regions, but instead are from temperate areas and are fairly cold-resistant.

Business is booming at the nursery but Collingsworth and D’Amato aren’t in it just for the money. Collingsworth says they practice “conservation through cultivation.” As these types of plants disappear in the wild, due to habitat loss, global warming and poaching, he and D’Amato continue to preserve the plants by cultivating them in captivity.

The population of Venus Flytraps, native to a 100-square-mile stretch of land in Southeastern North Carolina and adjoining South Carolina, has dropped in the wild from “many millions” to only about 30,000 today, says Collingsworth. Flytrap poaching is on the rise and Collingsworth says he believes companies who manufacture herbal supplements that contain the plant are to blame.

North Carolina recently passed a law making it a felony to collect flytraps in the wild without the permission of the property owner. Four North Carolina men, arrested in January, are the first to be charged under the new law after state Wildlife Commission officers allegedly discovered the men with close to 1,000 of the illegally harvested plants.

Carnivorous plant populations in the U.S. have fallen drastically over the last several hundred years. It’s estimated only 5 percent of native carnivorous plants species that existed before European settlement are still around today, according to Collingsworth. As European settlement grew, the plants’ habitats (bogs and swampy areas) were drained because they were considered unproductive. The plants are sensitive to pollution and other environmental factors, which has also played a part in their destruction.

Since reintroducing these plants back into the wild is a hard endeavor, the next best option is to grow and preserve them in collections, says Collingsworth. Both he and D’Amato have been avid collectors since childhood. As a youngster, Collingsworth bought his first carnivorous plant, a cape sundew, from D’Amato. He later began working for D’Amato and eventually became his business partner. As the botanical collection grew, along with their reputations, people began donating older collections and sending them seeds.

D’Amato, the author of “The Savage Garden: Cultivating Carniverous Plants,” started California Carnivores in 1989, and commercially cultivates a variety of carnivorous plants. Besides growing thousands from seed, the business partners also hybridize new varieties, including a cultivar grown by Collingsworth that he believes may be the largest flytrap variety bred to date, with traps as large as 4.5 centimeters, up to 1.5 centimeters larger than an average flytrap’s. He aptly named the monster “Ginormous.”

The company has a hand in most of the botanical exhibits in the U.S. that feature carnivorous plants, Collingsworth says, and their clients include scientists, collectors, zoos and botanical gardens. Avid collectors keep coming back for more. There’s a lot to choose from and a wide range of prices, from $7.95 to as much as $150 to $300 for rarer varieties.

The Victorian era (1837 to 1901) may have been the height of this pastime, when amateurs and professionals alike collected and grew carnivorous plants and other exotic species, like orchids, but Collingsworth says it’s making a comeback.

The International Carnivorous Plant Society (ICPS), which is made up of horticulturists, conservationists, scientists and educators, has an active social media presence, a lively online forum and various conferences on the subject. According to John Brittnacher, a member of the organization, ICPS counts about 1,140 members worldwide, with about a 60/40 split between American members and those from other countries.

As these strange and often beautiful plants disappear from the wild, it’s people like D’Amato, Collingsworth and the members of ICPS who hope to preserve these species for future generations. Luckily, if cared for properly, these plants “basically live forever” so the possibility of their continued survival, although not necessarily in the wild, is likely.

“I’m 37 and I expect that (my carnivorous plants) will outlive me,” says Collingsworth.