In Costa Rica, the bullfights are to glorify the bulls and turn rodeos into the fools. 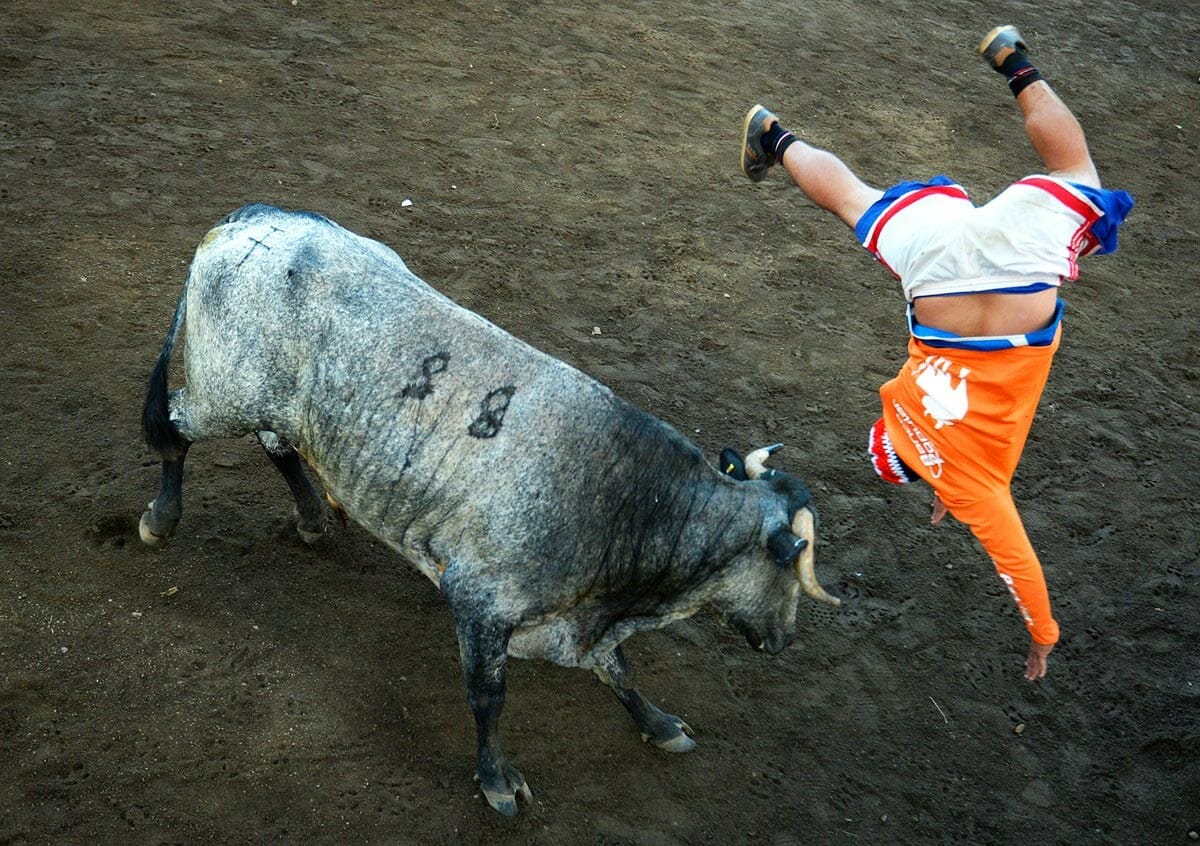 A bull tosses an improvisado into the air. Predictably, injuries are common at Costa Rican bull festivals. In the past seven years, the Red Cross has treated 4,070 people in the Zapote ring.
Share
Tweet
Pin
Email

Rather than glorifying man’s power over the beast, Costa Rica’s corridas de toros exalt the bulls, while turning people into fools. The festivals feature elements of a traditional rodeo, but add hordes of untrained, overly macho improvisados, or rodeo clowns, into the ring. Festival organizers offer cash prizes to particularly daring improvisados or host brutal games that force the rodeo clowns to face the bull head on. Though the bull may kill anyone in the ring, no one can kill the bull.

This intense, often hilarious spectacle culminates with the end-of-the-year Zapote Festival, during which thousands of Costa Ricans gather in the capital for a week of livestock-related debauchery. This year’s event ended on January 2, with more than 200 bull-related injuries and plenty of bruised egos. 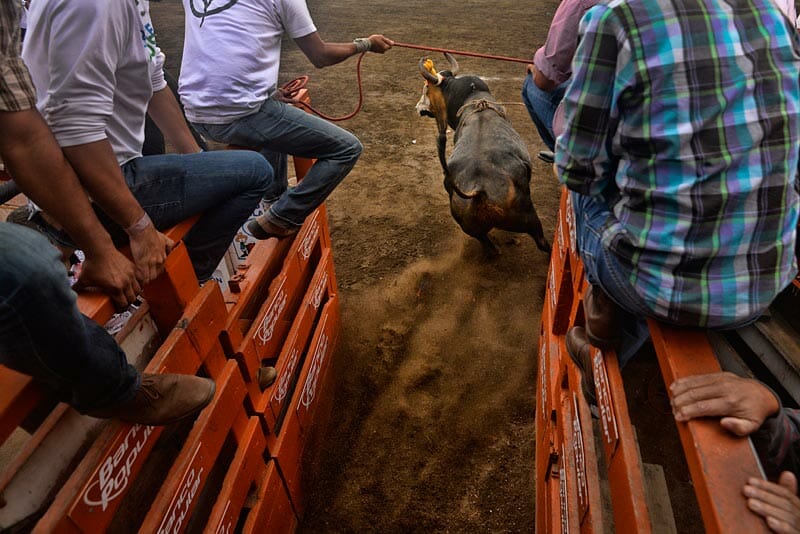 Overseen by a group of handlers, a bull sprints out of the gate and into the ring to face the improvisados. 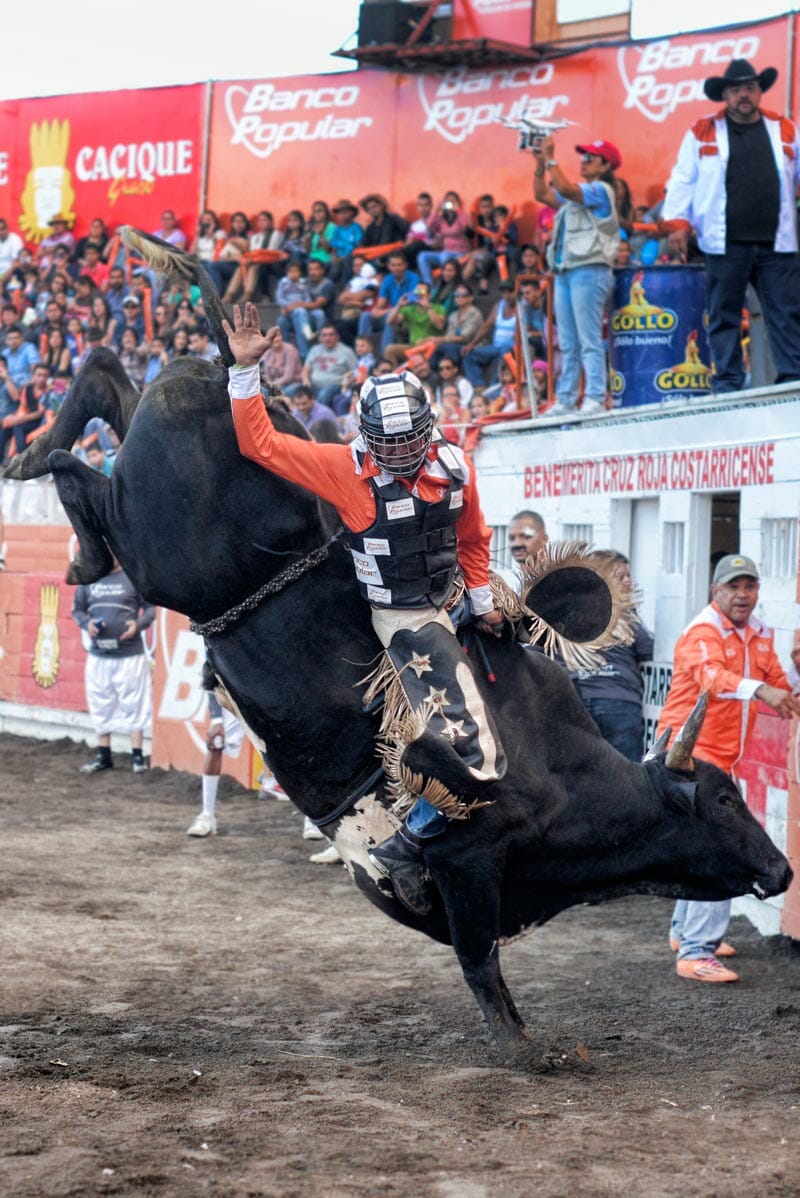 Deymor Diaz balances himself on the back of El Violador, or the violator, as the crowd looks on. Unlike bull riding in the U.S. and other parts of the world, Costa Rican bull riding is not timed. The success of the rider is determined by his technique, the reaction of the crowd and the acrobatics of the bull. 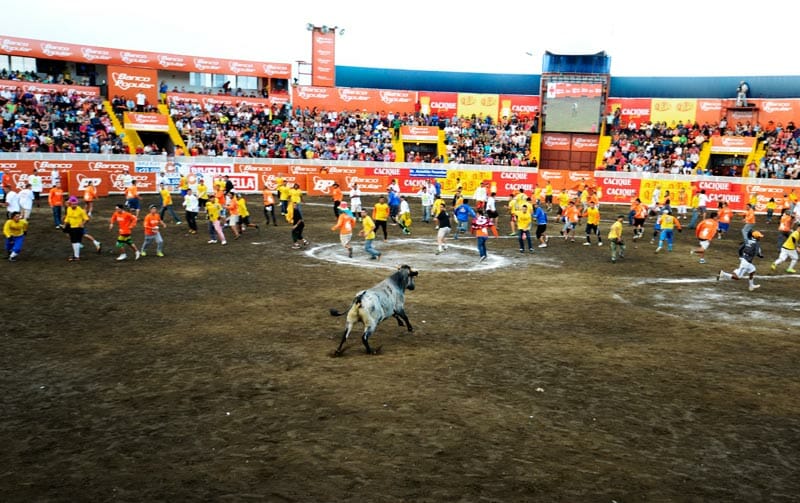 Improvisados flee as a bull charges into the ring. 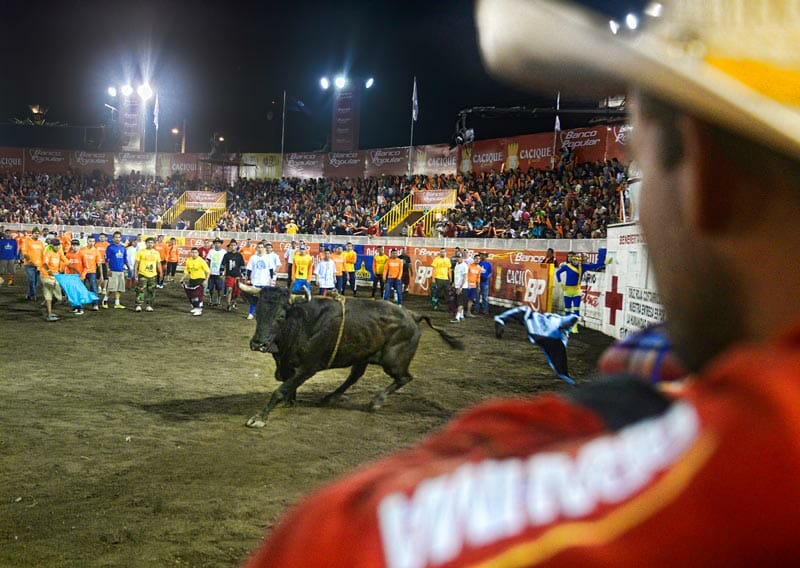 A bull rider looks on as a bull races into a semicircle of improvisados. 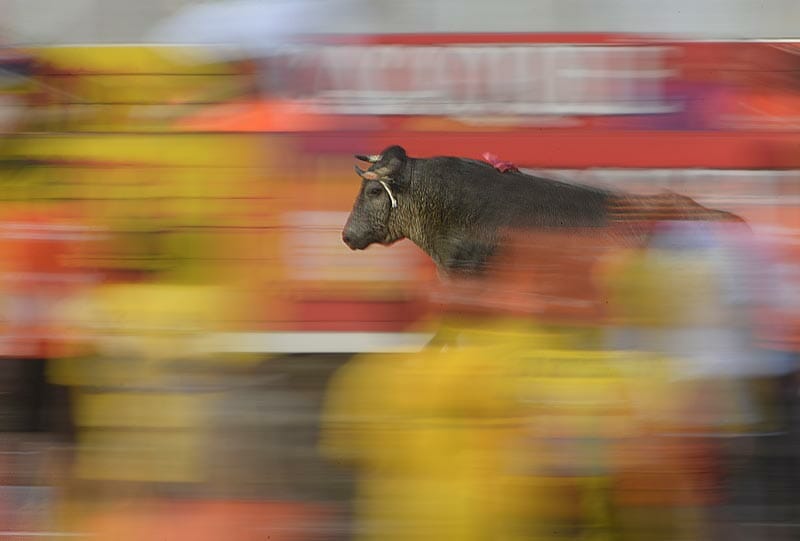 A bull circles the ring in search of a taunting improvisado. 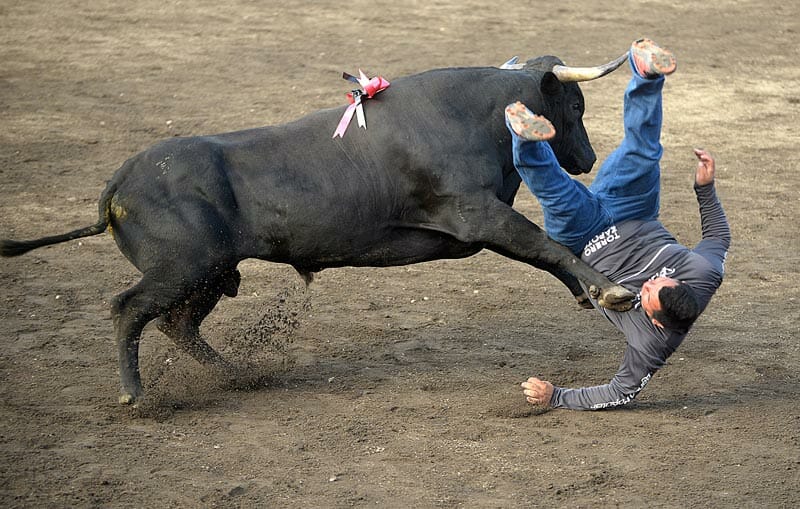 Zapote bull Pijamudo kicks improvisado Renzo Retana into the dirt after a failed escape attempt. Retana has worked as a professional improvisado and emergency responder for five years, but this was his first tour with Zapote, the country’s largest bull festival. 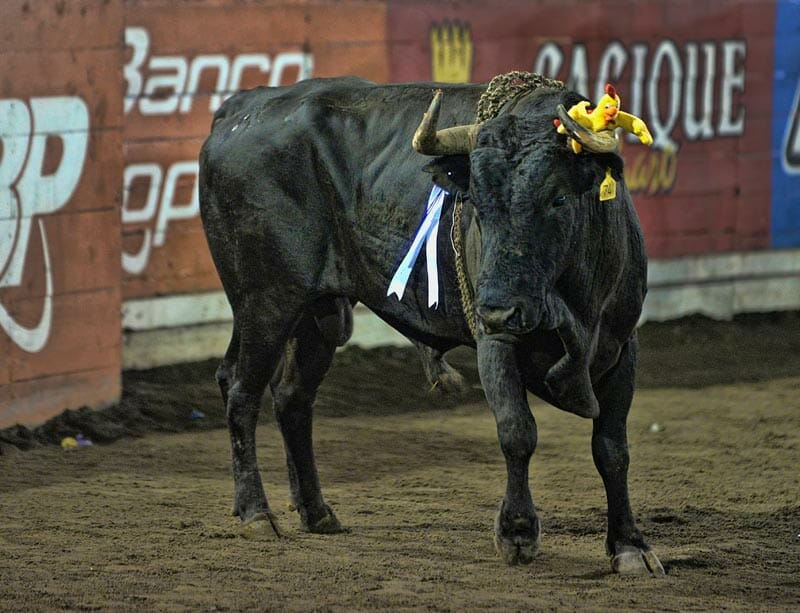 With a fast-food mascot affixed to its horns, a bull faces the ring. Event sponsors often devise games with cash prizes for the improvisado able to pull an object off the bull. 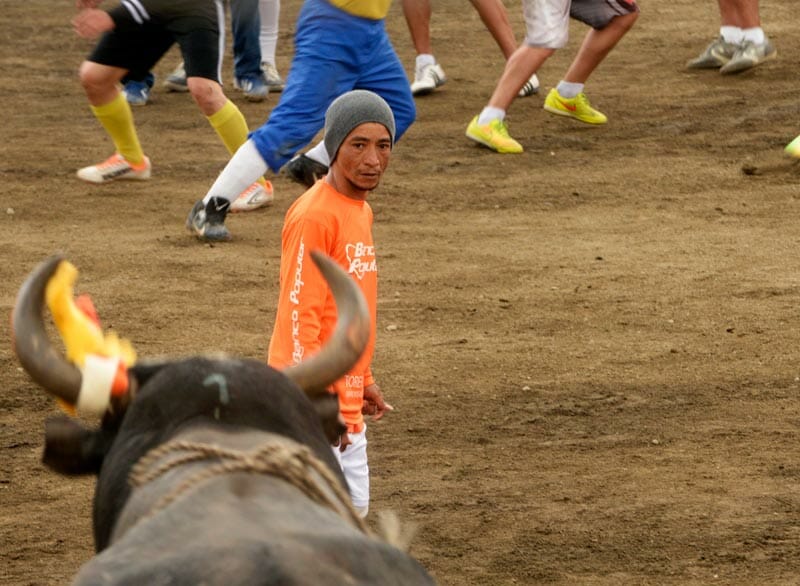 In a classic Zapote game of chicken, an improvisado slowly approaches the bull in hopes of a thick cash reward. 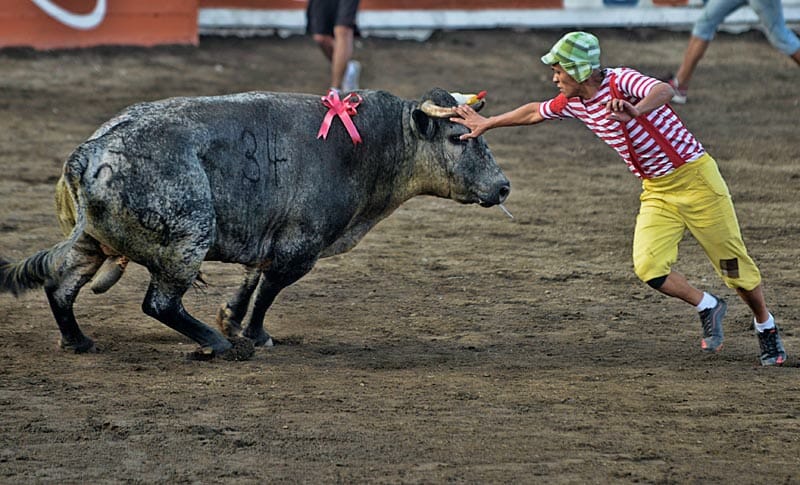 A professional improvisado brushes his hand against a bull’s horn before sprinting away. Event organizers pay experienced improvisados to help entertain the crowd and assist during emergencies. 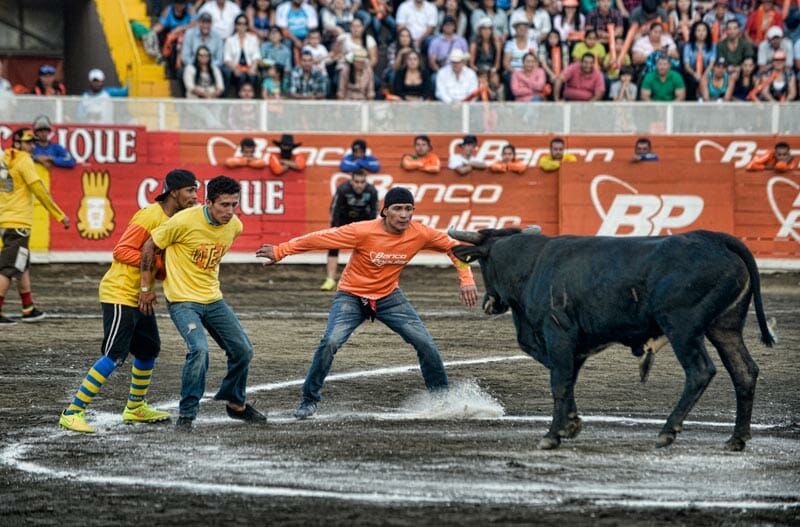 Three improvisados scramble to escape a bull without leaving a ring during a game of “dos ceros,” or two zeros. The game puts groups of improvisados into two circles while a bull charges between them. The last improvisado to stay in his ring while avoiding the bull wins a cash prize. 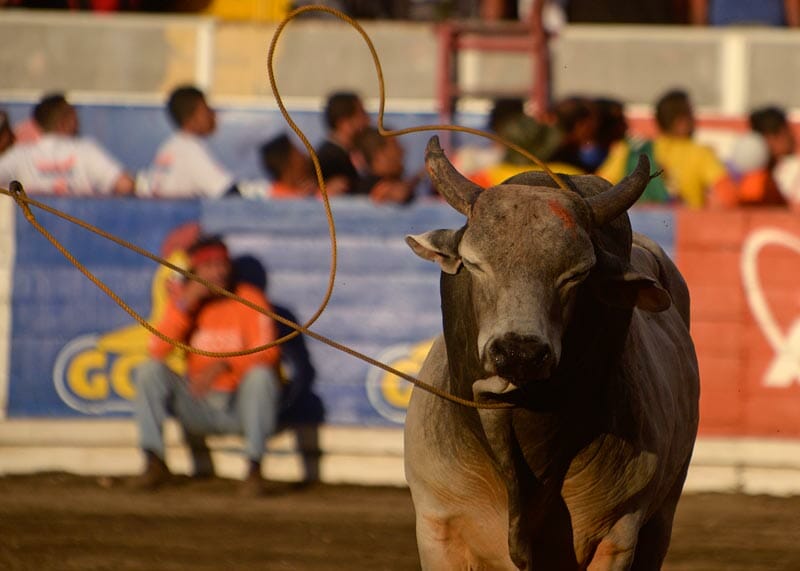 A bull blinks as a cowboy slips a lasso around its neck to carry it away from the ring. Cattle farms from all over Costa Rica haul their bulls out to the Zapote festival every year.