Is the GMO Debate Aimed at Pig Testicles?

Possible solutions on making your pork free from offensive odor, if not castration. 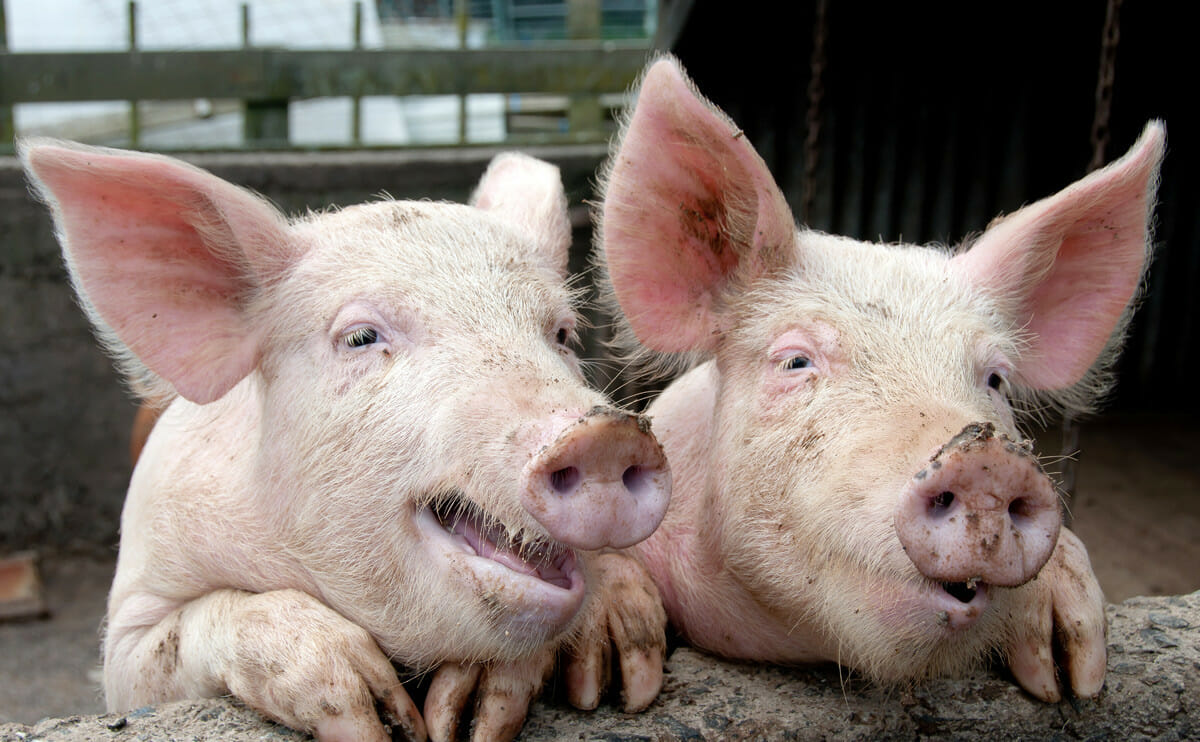 Uncastrated male pigs can develop meat that releases an offensive odor when cooked, commonly known as “boar taint.” (To be clear from the get-go, this article has nothing to do with the skin above pig testicles.) Many relate the smell to human urine. Dr. John J. McGlone, an animal scientist at Texas Tech University, describes the smell as akin to “gym socks or bad human body odor.” Consumers in Germany and Holland participating in a 2011 study said tainted meat smelled like sweat, pistachio nuts and fresh bread.

The lovely olfactory sensation of boar taint can be blamed on two compounds – skatole and androstenone – that accumulate in fat as boars reach sexual maturity. As a result, not all taints are created equal. Walter Jeffries, owner of Sugar Mountain Farm in West Topsham, Vermont, has experimented with methods of preventing taint without castration. He has since become something of a connoisseur of taint tastes. For instance, Jeffries says skatole “tastes like crap,” which makes sense given that the chemical comes from bacteria in the boar’s intestines. Androstenone, which is secreted from the testicles, is more reminiscent of an aggressive man that needs a shower.

A 1970 study found yet another variable in human genetics. While all of us notice skatole in our meat, only 56 percent of men and 93 percent of women can detect adrostenone. (Sorry on that one, ladies.)

Since few enjoy cooking in kitchens that smell like a middle school boy’s bathroom, meat producers across the world go to great lengths to prevent boar taint. In the U.S., that means castrating almost every boar at just a few weeks old. For those keeping score at home, that adds up to about 50 million castrated pigs each year and a grand total of 100 million testes.

Unlike most U.S. producers, Walter Jeffries phased out castration in 2009 for fear of botched procedures. “You lose some pigs to castration,” he explains. “Sometimes you get a hidden hernia and the pig guts spill into your lap, causing extreme pain and death. So I thought, there’s got to be to a better way to do this.”

After testing for taint in older and older pigs, Jeffries finally concluded he could replace castration on his farm by controlling boars’ diets and pasturing them away from females. In extensive blogs, he argues that this decision not only saved him and his pigs from a traumatic procedure, but also saved him money, since intact boars put on meat more quickly and efficiently.

Like Jeffries, other nations are experimenting with a range of alternatives to boar castration. The U.K., for instance, has long prevented taint by slaughtering intact pigs at a young age. In 2010, a collection of stakeholders in Europe signed an agreement to voluntarily end castration in the E.U. by 2018. Scientists are now exploring a range of alternatives, including selective breeding, high-fiber diets and shifted husbandry practices. Pfizer even offers a vaccine that prevents boar taint – an option troubled by the company’s warning that the drug can interfere with fertility if accidentally injected into a human.

Stateside, scientists have raised the specter of another option: genetic modification.

An unfunded cooperative agreement between the USDA’s Agricultural Research Service (ARS) and an unnamed corporate partner offers the boar taint problem as a sample project for exploring possibilities of manipulating livestock embryos. Unlike other GMO products, the scientist believe they can create a taint-free boar through a process that edits a pig’s genome rather than introducing any DNA foreign to the species. Avoiding any interspecies mixing, in their analysis, would make the pig “much more likely to be approved for human consumption by the Food and Drug Administration and other regulatory agencies.”

Adam Shriver, an ethicist and philosopher of cognitive science at the University of Pennsylvania, has paid particular attention to the boar taint project because it differs from most proposed applications of genetic modification.

“The main concerns over GMOs wouldn’t really apply in this case,” he explains. “If you combine DNA from different animals or insert new genetic information, you don’t know what the result will be. But in this case, it doesn’t involve any insertion of DNA.”

The supposed lack of risk in the proposal presses a further question: If genetic modification could prevent a great deal of animal pain quickly, why not just do it? Shriver says that objectors would have to either claim that the procedure is immoral or argue it opens the door to riskier or more ethically dubious forms of genetically modified livestock.

Of course, interest in genetically modifying against boar taint goes beyond concerns over animal welfare. As noted in the ARS project description, creating taint-free boars would offer producers the benefits of more efficient meat production. So while modified boars would avoid the pain of castration, editing pig genes would also make it easier for farmers to raise pork.

Jeffries suspects the capitalist motives of the project go further, pointing out that genetic modification might allow corporations to own life as intellectual property.

“The person who does this in the lab is going to want to be compensated and patent his creation, and that is patenting life that’s already out there,” he argues. “Why bother if all of this can be achieved through selective breeding?”

It’s a relevant objection, especially with all the other proposed alternatives to castration. Even so, the possibility of genetically modifying pigs to end castration is a chance for philosophers and the public to sharpen their arguments on genetic modification in general. The mere possibility of saving a pig from pain raises an awkward question: Could genetic modification ever be a way to show our animals some tainted love?