This beautiful, sprawling permaculture garden is run by guys who met in jail or on the streets. 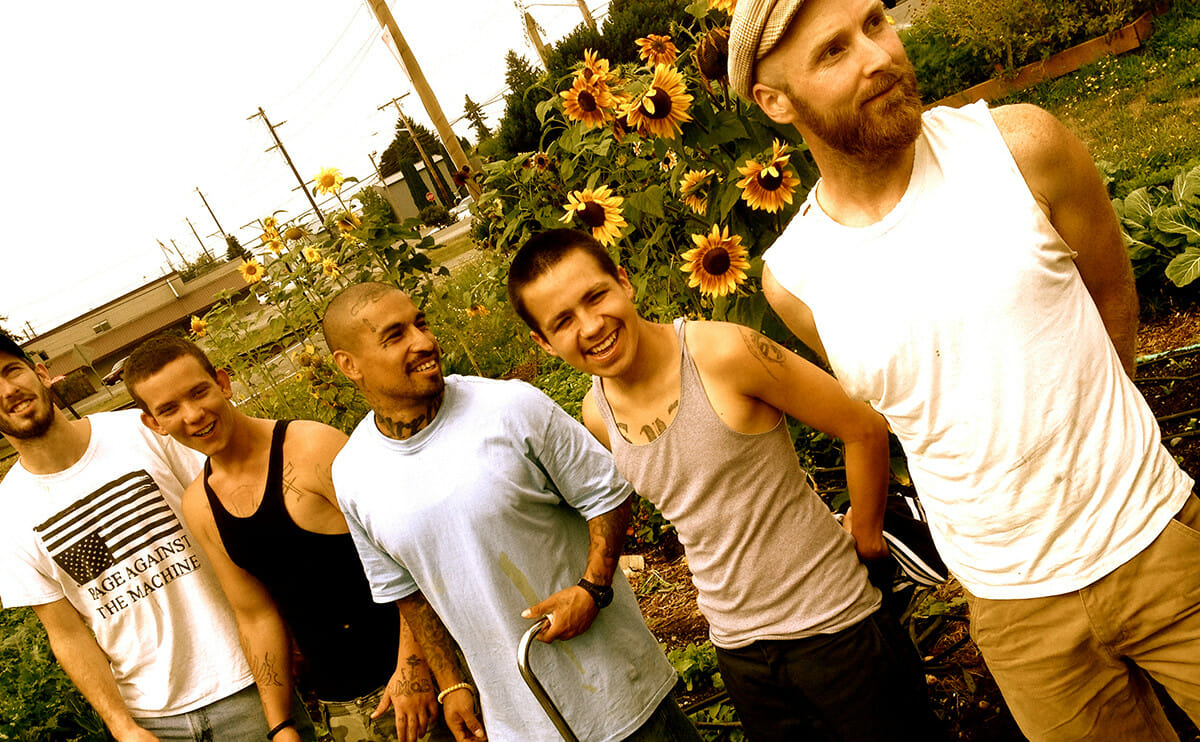 “Do we hafta do shmarden hours today?” one of the guys in our drug and alcohol recovery home complained when we first started the garden.

This skinny young man in his early twenties, with a pale shaved head and big ungroomed beard – who, for the purposes of this story, asked to be called “Doctor Drangus” – had spent the last two years, before detoxing and starting his recovery, on the streets of our Skagit Valley here in rainy Northwest Washington. He slept inside clothing donation bins at gas stations and tweaked out on crystal meth in the forest. He’d spend days in the woods carving sticks into little figurines with bugged-out eyes, squatting with a hunting knife, paranoid of all the noises he’d hear in the trees.

When we designed a permaculture-style garden this last year, we had lofty visions. Our organization works with migrant farmworkers and folks we meet in the jail where we visit as regular chaplains. We seek out and serve the people society uses up or throws away – deporting them or locking them up in social dumpsters.

We already had the gang and drug recovery home, but this new garden would be a site of healing, healthy work in the soil, reconciliation with the natural world after years of trauma, drugs, violence and prison cells. Back to nature. Wendell Berry kind of stuff. 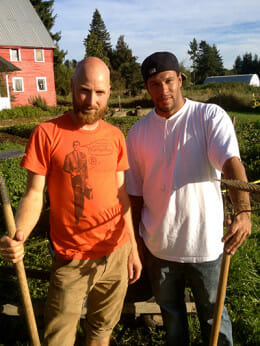 But Doctor Drangus would roll his eyes when hearing anyone on staff use the word “therapeutic.” He wasn’t buying it, these mandatory hours double-digging soft garden beds with us, sifting compost, planting comfrey around the plum tree. He had no patience for talk of plant diversity, symbiosis, or the art of building interconnections between different plant species. He’d find excuses to wander off, smoke a cigarette, disappear for an hour and come back from the corner store with a bag of energy drinks.

Larry, our garden director, a gentle and soft-spoken young man, was better at putting the plants in order. He arrived here from North Carolina, with a distinct Southern drawl not natural to these parts, after a cross-country spiritual quest on the back of an old Honda Nighthawk.

When it came time to corral workers into the garden, though, he’d stare at the soil with his deep brown eyes, twist his wieldy orange beard and begin explaining the subtleties of the day’s project… and you never quite heard the end of his sentences. They’d always taper off into contemplative silence. “Yeah, so…”

So the guys in the recovery home would light cigarettes and wander off. They weren’t catching the vision. Larry would end up working alone, humbly, out there among the sunflowers and tomatoes.

A lot of this changed when Neaners came home from prison.

Neaners was in solitary confinement at a maximum-security facility, doing seven and a half years for gang-related crimes in our valley, when he had the vision for this garden. In his mind’s eye, he envisioned a “lil’ farm with flowers and pigs and animals ‘n shit” where “homies can kick back in their chanclas [sandals]” and the “unloved and wanted” could make meals, sing, plant vegetables and “be in a lovin’ kinda place.” His prison letters, mailed to us, were the garden’s inspiration.

Neaners was in solitary confinement, inside a maximum-security facility, doing seven and a half years for gang-related crimes in our valley, when he had the vision for this garden.

So, in a sense, this Mexican gang leader with tattoos down his cheeks, deep inside a neon-lit cinderblock box 23 hours a day, was the garden’s founder. This summer, he came home. And got to work on the garden Larry had faithfully begun to build off of his prison-letter blueprint.

Neaners, with a mix of temper, charm and hustle, quickly put Doctor Drangus in check. As a former gang leader, he knew how to not just lead by example, but how to motivate others, give out orders, and get people to “put work in.”

The complaining stopped. Hard work — and laughter — increased among the guys. 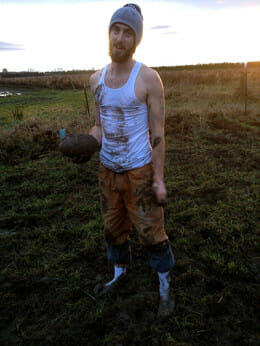 Our glossy handbook describes permaculture as “a dynamic interplay of order and chaos, entropy, tidiness, control, and creativity.” It encourages garden designers to build “close associations of different species around a central element,” whose intentional placement allows wildly different plants – as opposed to mile-long rows of one crop – to “benefit each other.”

Though we’re still far behind in building such plant guilds, I’m starting to see those principles play out with the human ecology in our garden. It’s like how Neaners’ street leadership skills partnered well with Larry’s quiet gardening brilliance. What’s that, if not symbiosis?

I look at Taylir, one of the new white kids in the crew, hacking away today at the roots of an old dead tree we’re trying to pull out of the ground. Taylir hated Mexicans all his young life. His uncles approved of the giant swastika tattooed on the center of his chest, and the smattering of WPs (for White Power) etched around his neckline and coming down his pale arms. He was taught to stick with his own kind.

So, now Taylir is working with a Mexican gangster in the garden – along with the three undocumented Mexican boys whom Neaners has led out of the projects. Now they tease Taylir, and throw nasty leaves at each other by the compost pile.

Neaners is scheming with Taylir to cover up that swastika on his chest with a new tattoo of a Sacred Heart. He’s hooking Taylir up with his tattoo artist buddy. “We gotchyou,” he assures. 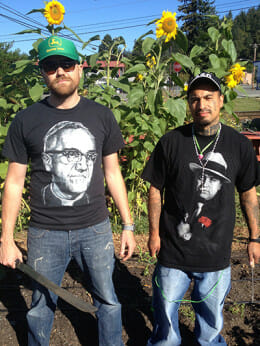 Gangsters, tweakers, skinheads, “illegals,” sensitive hippie farmers, normies – there’s resonance when we are placed in the dirt together, away from our various isolations of prison cells, clothes bins, or bookstores. Like plants, we need each other.

Permaculture helps me see those deeper mysteries, even if we’re not cranking out braggable, edible produce yet. Most of the walnuts, for example, ended up rotting last month. The guys never finished raking them up from under the heritage tree – they found a crusty football and we ended up tackling each other in the frigid mud until dusk. When we were done, we emerged with our differing shoes, shirts, tattoos, skin colors, all covered with the earth, talking shit as trumpeter swans flew over our heads with the cold, magical sunset.

As in all experiments, surprises are bound to yield. Just this week, Doctor Drangus enrolled in local community college classes. The “nature shmature” former meth-head has chosen a major: environmental conservation.

Some names in this story have been changed by request.

Chris Hoke is a jail chaplain, gang pastor, and coffee roasting entrepreneur. His book WANTED: A Spiritual Pursuit Through Jail, Among Outlaws, and Across Borders (HarperOne, 2015) comes out Feb. 3.

Thanks i read the book and really enjoyed