Meet Whiplash the Cowboy Monkey, a 3-time Pro Rodeo Entertainer of the Year. 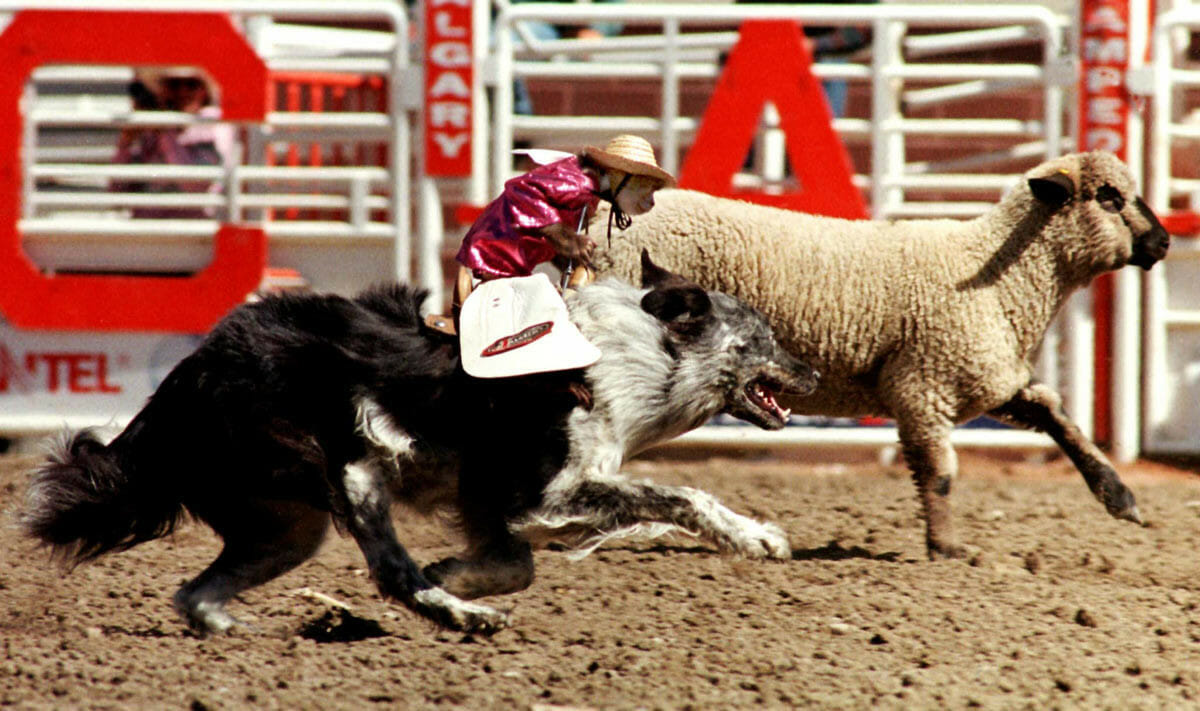 Whiplash’s steed is a border collie, which he rides around a ring at speeds up to 30 m.p.h. rounding up sheep, to the amusement of the crowd. He and the country’s other cowboy monkey rodeo riders, the group act Team Ghost Riders, are a funny and delightfully surreal sight in their cowboy hats, Western shirts, and chaps, sitting straight up on their dogs and appearing to steer towards the sheep (though, really, the border collies are more or less doing the work).

Monkey rodeo riders mostly perform at minor league baseball games around the country — the idea being that if the game is a runaway, people will stay in their seats to watch the acts after the ninth inning. If you can’t catch one in person, their videos are widely available on YouTube. Go ahead. You won’t regret it.

While the Florida-based Team Ghost Riders travel together, Whiplash is a solo act, and travels with his owner, Kenny Petet, whom he also lives with. “My wife and I never had kids, so he’s as close to one as we’ve got,” says Petet in a phone interview from his Texas ranch, where he and Whiplash are taking a holiday after months of performing at baseball games, rodeos and water parks. “He stays in the house and has the run of the place most of the time. Right now he’s sitting on the edge of my desk eating Oreos.”

“Whiplash is an athletic little son of a gun,” Petet says.”He loves being the center of attention.”

Some animal rights groups like the Humane Society decry the cowboy monkey rodeo as unsafe for the animals because it may cause the monkeys to “suffer psychological distress and risk serious physical injuries,” but Petet says it’s not — at least the way he takes care of his charge (he can’t speak for the other outfit). Whiplash isn’t strapped onto the horse, contrary to popular belief, and likes the physicality of the sport. “Whiplash is an athletic little son of a gun,” Petet says. “He loves being the center of attention, that’s his favorite thing.”

Petet also makes sure that Whiplash gets vet checkups every three months and a full physical every year, and random inspections by groups like the USDA ensure that his animals are treated with care. “Even if I wasn’t as enamoured with [Whiplash] as I am, the level of scrutiny and inspection we have weed out those sorts of people [who abuse animals] in a minute,” Petet says.