Once a choir of disharmonious cluckers now stands a small orchestra's worth of instruments. 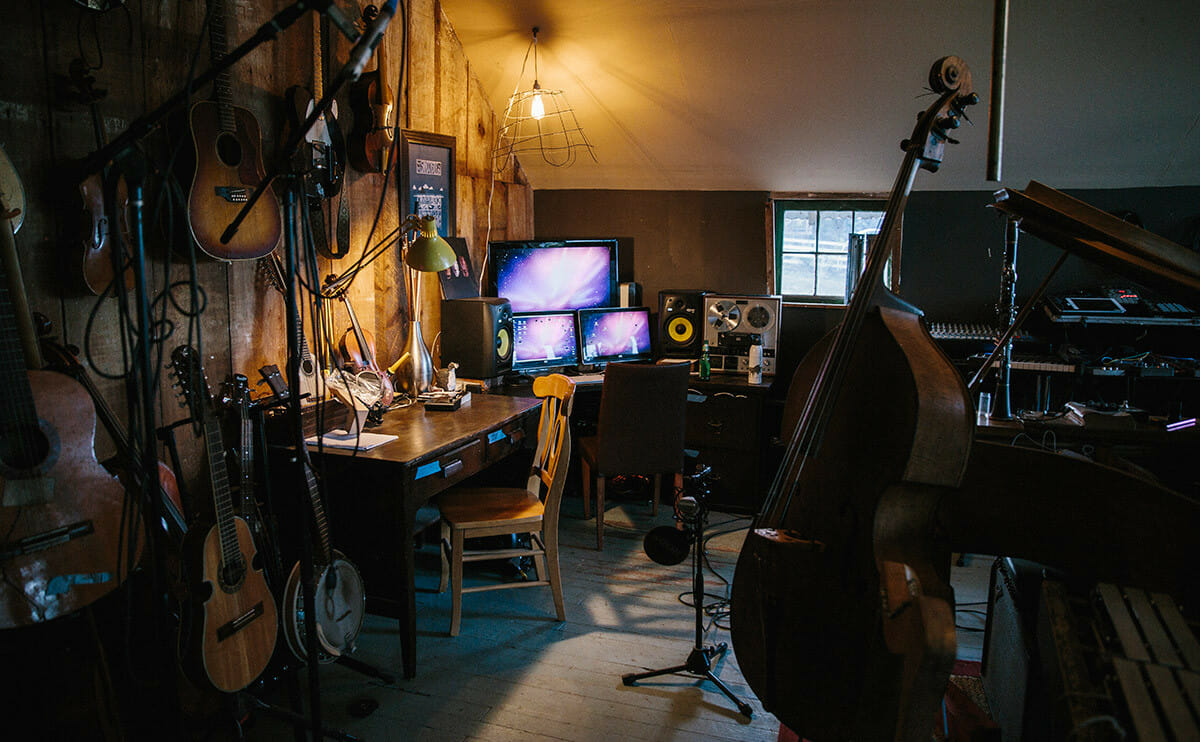 “We made an itemized list of pros and cons of living away from the city. All of the pros were non-practical,” says Fritch, 29. “Like, ‘You’re a young person. You should be out networking with people.’ But in this crazily interconnected digital universe we’ve strung together, it’s just not necessary. I could continue to fake being in a place that I wasn’t, or I could come here and chop wood and carry water.”

He’s not alone in thinking this way. In an ironic turn, the march of technology has made (nearly) off-the-grid living possible for artists seeking space to create, an escape from inflated urban rent and a healthy lifestyle that doesn’t require nine months of touring each year. Fritch has agrarian soul mates in the likes of Nick Zammuto, 40 – founder of beloved experimental pop duo The Books, now recording under his surname – and Brian Crabtree, 34, an electronic musician (Tehn) who builds highly coveted digital instruments by hand under his Monome brand.

“I grew up in the suburbs at the end of a cul-de-sac. If you needed something there, you went out and bought it. We don’t do that,” says Zammuto. He lives with his wife and three boys on 16 acres in Readsboro, Vermont. They homeschool (using online courses), plus have chickens, honeybees and enough flora to sustain the family. The couple built most everything themselves — “I have this image burned into my mind of Molly with a giant, eight-month’s pregnant belly, working at a chop-saw” – and he records in a converted tractor garage, insulated for heat and soundproofing. 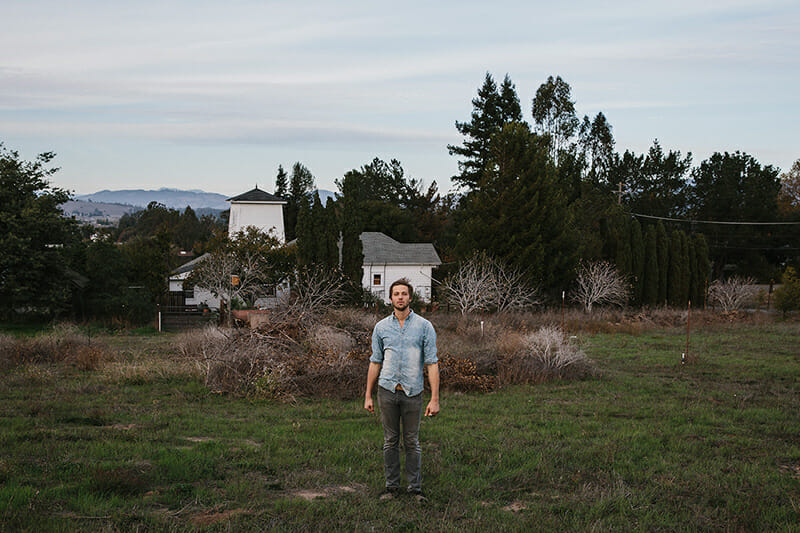 Fritch standing in front of his water tower in Petaluma, California.

“We have to be careful with money, so we don’t hire contractors,” Zammuto admits. “But financial reasons aside, there’s something incredibly satisfying about having made the structure you live in. Along with the birth of my children, it’s the thing of which I’m most proud.”

Since Crabtree’s devices are open-source, meaning their buttons serve different functions depending on software coded by an online community of users, the entire success of his work is predicated on the Internet’s existence. As is his ability to live in the Catskills, in the “truly rural and depressed” Delhi, New York. He and his wife have 35 acres, with an apple orchard, sugar maples they’ve inoculated with shiitake, “senseless amounts of garlic,” currants and whatever’s left of the 50 gallons of kimchi they made last year. They learned how to kid their goats on YouTube.

‘I could continue to fake being in a place that I wasn’t, or I could come here and chop wood and carry water.’

“This absolutely would not have been possible 30 years ago,” he says. Monome’s suppliers are out of state, assembly happens in their modified dairy barn, and many sales are international. Crabtree’s wife Kelli Cain has a ceramics business that’s also taking off thanks to social media. And they have the space and freedom to throw an annual overnight festival for friends of friends, plus host studio visits for her practice.

“Before, we would’ve needed a storefront in the city,” Crabtree continues. That’d mean more overhead, which could hurt product quality. “Instead we have a forest behind our studio, running water and changing seasons. If we need a break, there’s always something to examine or explore, rather than just drinking more coffee and pounding the computer screen. We never even know what day of the week it is.”

Fritch – who can be heard in the acclaimed film Skunk, and in collaboration with Volcano Choir’s Jon Mueller as Death Blues – guesses that for every 20 people who hire him, he meets only one face to face. Similarly, Zammuto’s fans paid for his wonderfully adventurous 2014 LP, Anchor, via crowdfunding site Indiegogo. Like Crabtree, they make physical merchandise, too – limited vinyl runs that include screen-printing, etching, or other bespoke flourishes – to supplement digital streams and downloads. 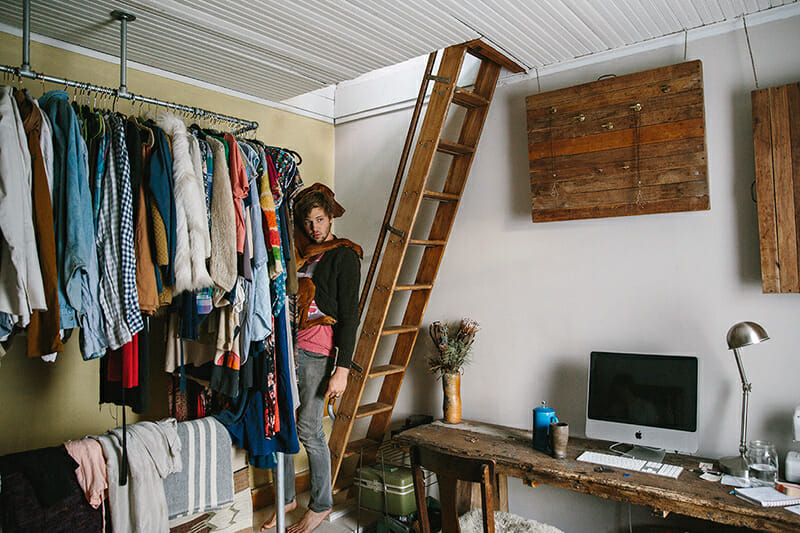 Fritch carries Verde down from the bedroom in the morning.

It’s telling that all three have lived in metropolises (Los Angeles is a common theme) and none misses city living. “I felt like, ‘How can I be around so many people and still be lonely?'” says Siri Hanson, Fritch’s wife, who runs a ceramics and jewelry business of her own. Zammuto’s memories are fonder but no less final: “It was a fine life. It just wasn’t my life.” All moved in the last few years and would agree that being happy, as Crabtree puts it, “seems to be about eating good food and being with good people.”

That doesn’t mean all’s idyll out in the boonies. There’s hard work to be done, but satisfying rewards to be had. And there are quirks too. Like having to carry your 72-pound hound up a boat ladder to your third-story water tower bunk, because he won’t sleep alone. But the Fritches count that a just another unusual charm of what’s become their daily routine.

“If you listen back to my last three or four records,” says Fritch, “you might hear Siri hammering metal, Verde scratching at the door, or a bedlam of roosters the next farm over trying to harmonize like a middle school choir. But I don’t mind if those make it in. In a way, I find those sounds more enjoyable than what I’m making.”