The Case For Eating Older Animals

Should tenderness really be the end-all of meat eating? 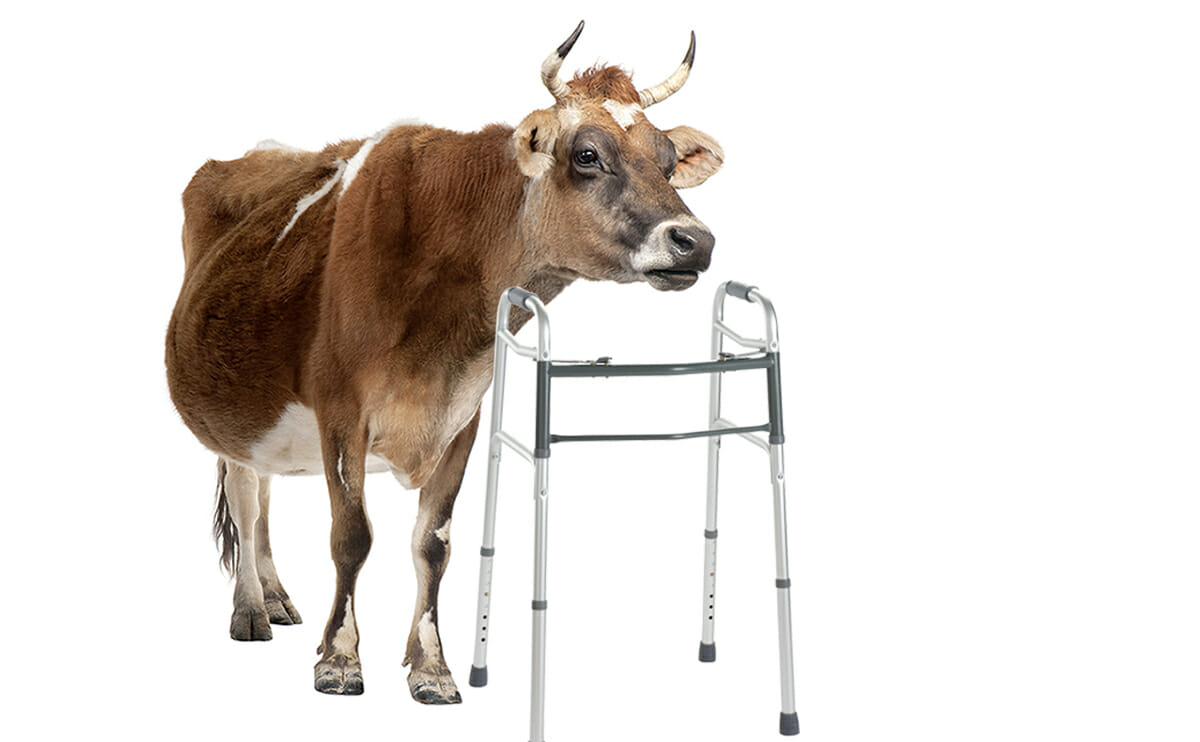 Why are we hooked on eating these dewy eyed, fresh-faced animals? One of the main reasons is because meat from tender young things is, well, tender. But should tenderness really be the end-all of meat eating? Adam Danforth, the author of Butchering, a comprehensive guide to humane slaughtering and butchering, believes our approach to meat is misguided. “People have prioritized tenderness over everything else,” he says. “But this prioritization of tenderness means that we deprioritize flavor.”

Danforth argues that only older animals have had the time to do the work and eat the foods that make them really taste like what they are. Beef from a four- or five-year-old, grass-fed cow will have a distinctly beefy flavor, unlike the comparatively bland flavor of meat from a younger, feedlot-finished cow that is fattened as quickly as possible on a diet of corn, regardless of the fact that its stomach is not designed to digest such a high-starch grain.

“The longer an animal lives and the more work it does, the more flavorful its meat becomes.”

“The components of flavor are in the life of the animal and the work that it does. The longer an animal lives and the more work it does, the more flavorful its meat becomes,” says Danforth. He is an advocate for eating older, “cull” animals, for which there is currently little to no market. When a laying hen’s egg production begins to dwindle after several years, farmers often find themselves with very few options. With the exception of a handful of well-educated, dedicated CSA subscribers, no one wants to buy “a tough old bird.” A retired laying hen makes for one tough roast chicken ”“ like chewing meat gum. However, cull hens make the best stew chickens because they have far better flavor than their younger kin. “I would never use a fryer as a stew chicken ”“ it has no flavor,” says farmer Brett Grohsgal of Even’Star Farm in Maryland. Despite his personal appreciation for the merits of older birds, Grohsgal struggled to find buyers for his retired laying hens before he switched his operation over to vegetables-only. “There’s just not much of a market for older birds,” says Grohsgal.

While it is undeniable that meat gets tougher as an animal ages, Danforth says it is possible to get flavorful and tender meat from an older animal. You just have to follow these three steps.

One of the arguments for eating older, cull animals is that doing so allows them the time to live a full life. But I’m not talking about stretching out the miserable life of a pig in a gestation crate for years on end; that would just be cruel. Raising animals right means giving pigs the space and terrain they need to root and forage, allowing goats to run, climb and butt heads while browsing on the kind of scrubby brush they favor, and moving chickens to fresh pasture every day to scratch and peck up the bugs, grass and seeds they crave. Practicing this kind of rotational grazing can also help farmers enrich the soil via manure and offers a cheap, environmentally-friendly way to reclaim overgrown pastureland – chasing a herd of goats with a drove of pigs is a particularly effective one-two punch for beating back unwanted vegetation.

Killing animals “right” means killing them quickly, in a way that is as painless and stress-free as possible. Keeping an animal calm right up until the moment of death is the only way to avoid the stress hormones that render its meat less palatable. Danforth is a big proponent of slaughtering animals right on the farm. “It’s the ideal situation,” he says. “The animal is in familiar surroundings with handlers it knows, rather than being trucked to an outside facility which can be a very stressful experience.”

Danforth recommends the use of a captive bolt gun ”“ a device that is powered by a blank or pneumatically that quickly inserts and withdraws a 3-4 inch metal rod into the brain of the animal, leaving it alive but insensible to pain. The animal must then be bled immediately, a process that is mercifully speeded by the beating of its own heart, and dies in short order from lack of blood to the brain. Says Danforth, “I like that this method forces you to get right up close to the animal and recognize it in a way you don’t have to if you use a gun. I also sit with the animal as it dies. For me, it’s a very powerful and profound moment. I think it’s important to be there.”

Proper aging is the key to making meat from older animals tender and delicious. Aging is an ancient practice which consists of hanging the carcass in a cool environment such as a barn or a walk-in cooler for a number of hours, days or weeks. “Aging is controlled rot,” says Danforth. “There are certain enzymes that are present in the meat that are kept in check while the animal is alive that ‘go rogue’ after the animal dies. They begin to snip at the proteins that make muscles contract and at the connective tissues.” In doing so, these enzymes render the meat both more flavorful and more tender. Aging also allows some moisture to evaporate, leading to a concentration of flavors in the meat. And fat begins to oxidize, adding a desirable, nutty flavor to the meat.

Exactly how long the animal should age depends on a variety of factors including the type and size of the animal and the temperature and humidity level of the aging environment. But, in general, the larger the animal, the longer it can age for.

Not only do older animals offer great flavor at bargain prices, the meat goes down easier when you know that the animal in question lived a full, natural life before making its way to your plate. “These animals deserve our respect ”“ they’re delicious and very worthy of being a center-of-the-plate protein,” says Danforth.

I know this an old blog, but I have been trying to find a source, local or mail order, for “old” meat in the US. (MARYLAND specifically). I was raised on an angus farm long ago, and we ate the old cows. And they tasted GREAT. A bad cut of old cow had much more flavor than prime anything today.

Where to get old cow today though

We’re culling 3 of our Angus cows later this summer. They’ve had great lives eating nothing but grass. We’re planning to make mostly hamburger. But if someone wants other cuts we could consider special cutting instructions. Look up Third Thyme Farm near Sumas, WA with dry ice and FedEx… companies ship meat all over the country!

how long to age meat from a warsui cow

The reason we don’t eat older animals is for more practical reasons. You can’t feed a cow for five years and expect to make any money from raising it. Farming is not a charitable activity. People are trying to scratch a living from raising livestock. And in most cases, you cannot kill an animal on the farm and sell the meat to the public. Oh something called the USDA might have an issue with farmers selling sick animals to an unsuspecting public. If you want to do what you mention in the article, you need to start your own homestead.

Trying to source mature beef (5-9 year old) here in the United States. The flavor is amazing and intense.

Related
Environment
High Winds Are Rattling US Farmers This SpringSarah Kuta
Food & Drink, Technology
How High-Pressure Processing Is Helping Remote Farmers Bring Fresher Foods to MarketNaoki Nitta
Dairy, Environment, Technology
Can Biodigesters Save America’s Small Dairy Farms?Anne N. Connor
Food & Drink, Plants, Recipes
A Botanist-Bartender’s Ode to the DandelionDanny Childs
wpDiscuz
We use cookies on our website to give you the most relevant experience by remembering your preferences and repeat visits. By clicking “Accept”, you consent to the use of ALL the cookies.
Cookie settings ACCEPT
Privacy & Cookies Policy