The Original Southern Peanut Was Thought To Be Extinct, But One Farmer Is Bringing It Back - Modern Farmer
Animals, Food & Drink, Plants

The Original Southern Peanut Was Thought To Be Extinct, But One Farmer Is Bringing It Back

The heirloom legume Peanut No.4 is making a comeback in the South. 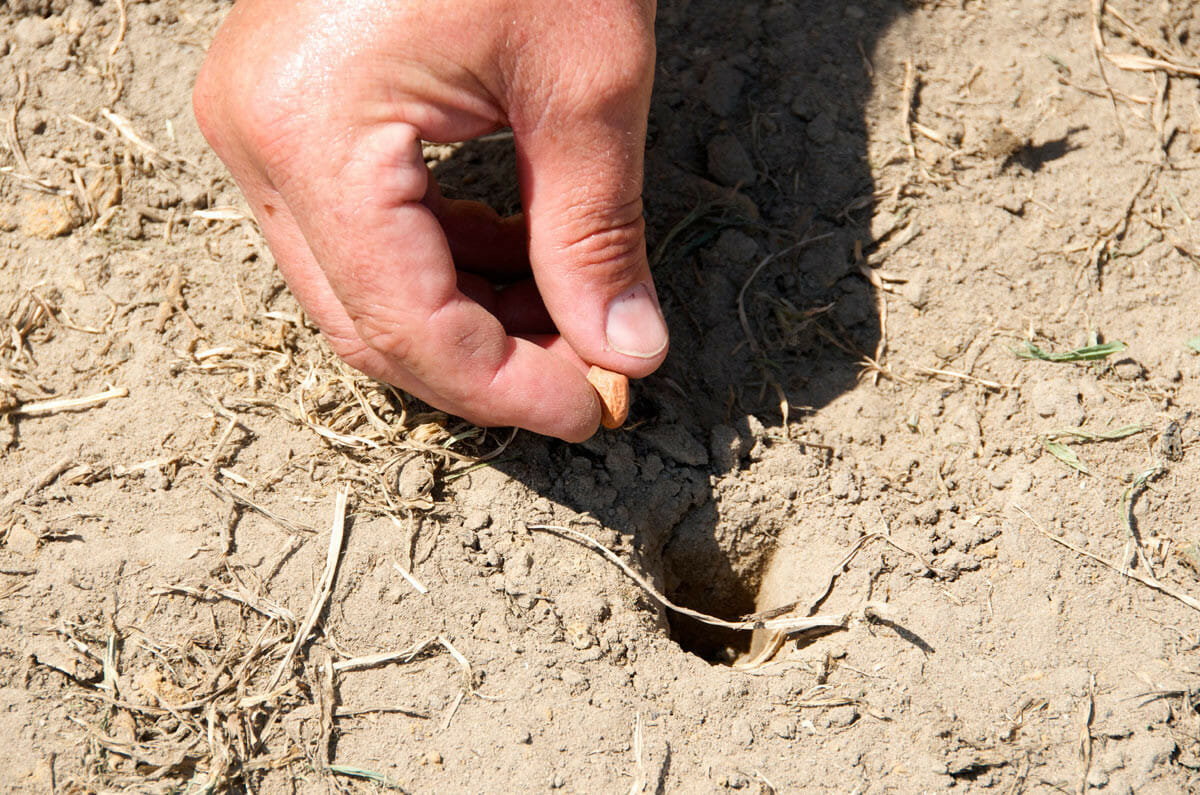 In one field grows the now largely forgotten Jimmy Red corn, originally used in moonshine and grits. In another grows Carolina Gold rice, the grandfather of today’s American long-grain varieties. And one day last June, past heirloom muskmelons baking under the sun, another forgotten taste was added to the mix: the South’s original peanut, long thought to be extinct but now primed for revival.

It is known as the Carolina African runner, and Dr. Brian Ward, a horticulturist at Clemson University’s vegetable research center (or, as he describes himself, a “farmer-scientist”) is the world’s sole cultivator of the legume. On that broiling June day, he was tucking the small, dense and oily legumes into shallow indentations in the dusty soil. Once ubiquitous throughout the South, they were prized for both their flavor and the quality of the oil they produced (“The Carolina is principally used for the manufacture of oil, which cannot be distinguished from olive oil,” the Household and Farmers’ Cyclopedia enthused in 1875). The Carolina fell out of favor because its small size made it more difficult to harvest (and less appealing to the eye) and new strains proved more disease-resistant. By the 1950s, it was thought to have disappeared entirely. 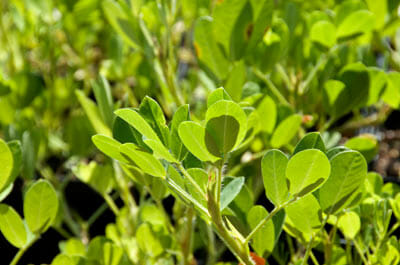 But just a couple of years ago, Dr. David Shields, a food historian at University of South Carolina, tracked down a peanut sample that had been modestly labeled Peanut No. 4, realizing that, in fact, these were the last of the Carolina runners. He contacted Ward and asked him if he’d be willing to cultivate some peanuts for him. Ward agreed. “I didn’t know at the time I’d been given half the seeds in existence,” he says.

Enslaved Africans originally brought the peanut to North America in the 1600s, along with traditional methods for cooking it; the boiled peanut, for example, originated because bambara, an African groundnut, is often boiled. Since then, it has developed a special place in American cuisine, especially in the South. Recipes created by African-American cooks often passed into white households, such as the peanut soup that George Washington and Thomas Jefferson regularly supped on. In the 1840s, a group of Virginians traveled to Bolivia, seeking a large peanut that would work well for roasting, an increasingly popular cooking method. The variety they brought back became known as the Virginia peanut, still the dominant peanut in the U.S. today.

For a time, small farms and patch gardens continued to grow different cultivars, and through the 1930s, Shields says, the Carolinas were still grown by those who preferred their taste. However, as land was increasingly used for commodity crops such as soybeans and corn, the diversity of the Southern garden withered. Around the 1990s, chefs in the region were caught up in a swelling interest in the vanishing foods of their childhood. “The question was, where had it all gone?” says Shields. “Could it be brought back?”

“The question was, where had it all gone?” says Shields. “Could it be brought back?”

Glenn Roberts, CEO of Anson Mills, thought it could, and approached Shields about restoring the heirloom vegetables and landrace grains that were once common in the Southern kitchen. Shields spent years reading 19th-century agricultural journals and seed catalogues to determine which varieties seemed promising for restoration. The ancestral peanut made the list, and the hunt was on. Luckily, in the 1940s North Carolina State University collected samples of a variety of peanuts during a breeding program, and the Carolina’s germplasm was preserved.

The seeds went to Ward, who has been their only grower for the last two years. (“The fact that this cultivar is on the verge of being generally released after being on the verge of extinction is largely due to his talent as an organic cultivator,” says Shields.) From the original handful, Ward has managed to produce enough seeds to start 1,200 plants last year. This year, he will be able to provide seeds to commercial growers. These peanuts don’t have the resistance to disease that has been bred into modern ones, but they do provide vital genetic diversity. While the peanuts are vulnerable to some diseases, they are also, Shields points out, remarkably resilient in other ways. “They were bred over hundreds and sometimes thousands of years to be durable under a range of circumstances,” he says. “You can count on a percentage of the crop making it.”

Matthew Raiford of Gilliard Farms in Georgia, plans to grow the peanut this year to feed to his hogs. A chef and a member of Slow Foods U.S.A. in addition to being a sixth-generation farmer, Raiford is committed to helping bring back Southern agricultural biodiversity. “It’s something that can be a food, used as oil, fed to animals, and also makes a good cover crop,” he says. “People used to grow things that they could get multiple uses out of, instead of just monocrops. I think we’re looking for more of that to happen.” But that’s not the only value he sees in this year’s crop: He also has plans to start experimenting with different culinary uses, including a luscious peanut hummus and the more traditional peanut brittle. He thinks there will be consumer interest in the peanut for two reasons. “I think there’s going to be some nostalgia, for people who haven’t had it since they were a kid,” he says, “but other people will just say, this is so good, we should use this more often.” 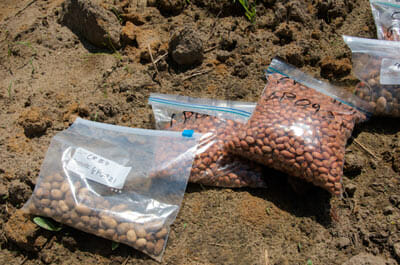 Peanuts in the field during last year’s planting.

Ward hopes that as the peanut continues to multiply, he will persuade South Carolina farmers to try the new (old) legumes, which he hopes will provide them with a valuable source of revenue. “My mission here is for South Carolina growers,” he says. By showing the seeds are viable and drumming up consumer interest, he is helping them to avoid the economically challenging introductory phase of the peanut’s rebirth. “Growers do not like trying something new unless you can prove it to them, plain and simple.”

But it is the confluence of forces rallying to revive the peanut that lends special weight to its reappearance. “One of the interesting things about this endeavor is that there’s farmers involved, there’s chefs involved, there’s plant scientists like Brian involved, and there are historians like me involved,” says Shields. Ward says interested farmers have already approached him, and chefs in the foodie hub of Charleston are clamoring for them. Boiled peanuts, for which the Carolina runners are particularly suited, are beginning to make inroads outside of the South thanks to the efforts of peanut entrepreneurs like the Lee Brothers, who are looking to expand the regional market. “Not many people think of boiling peanuts as a number one priority,” Shields says. “But those people, particularly in the South, who savor boiled peanuts, when they have one of these Carolina Africans they’ll say, ‘Ah, now I understand’.”

Restaurateurs, entrepreneurs and foodies wait with bated breath for this new heirloom experience, which provides a financial incentive for farmers to take on the Carolina runner. But some growers will also see value in helping to bring back the plant from the brink of extinction. “If you’re serving a global market for soybeans or corn, you perform an essential service, but you don’t have much of a sense of yourself as a creator or a steward of the land,” Shields says. “It’s much easier to see that creative, ethical, and engaged sense of what the vocation of a farmer is when you take up one of these things.”