7 Kinds of Sashimi Not Made With Fish - Modern Farmer
Food & Drink, Lifestyle

7 Kinds of Sashimi Not Made With Fish 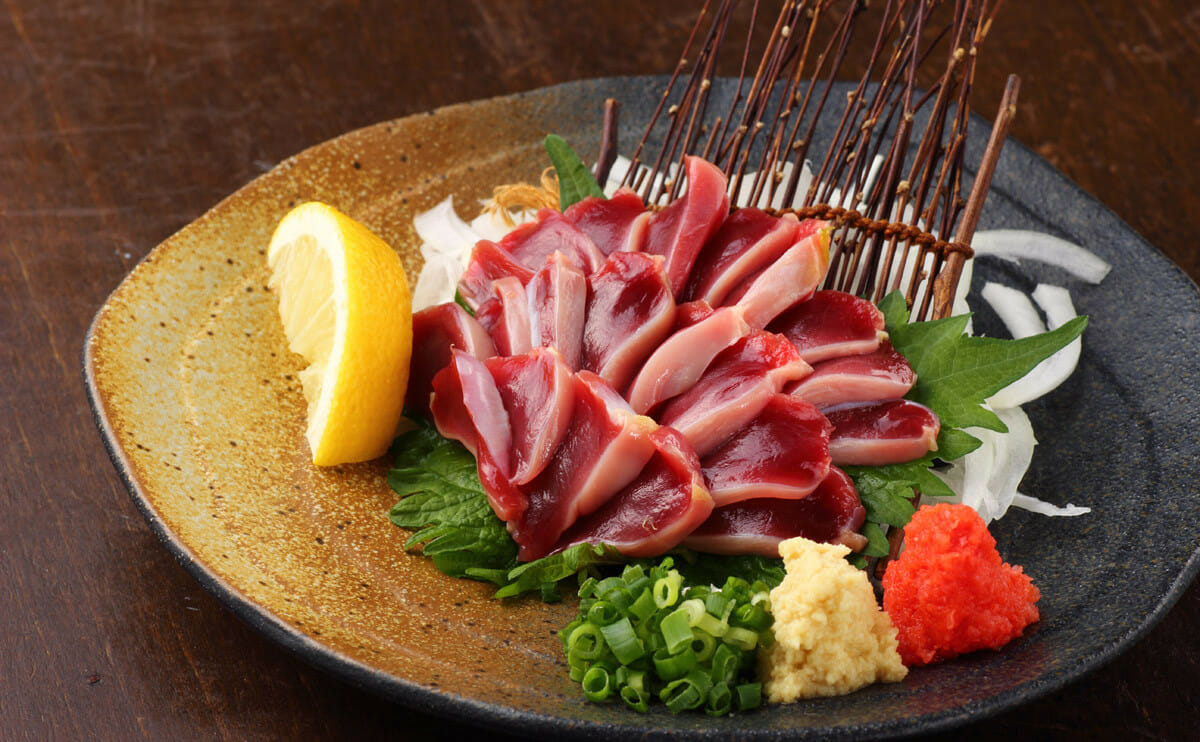 Marbled Wagyu beef is a heavenly ingredient for steak lovers; this is also true for sashimi cravers. The red meat, interspersed with white, thin ribbons of fat, is delicious when consumed raw. Unlike most seafood sashimi, instead of shoyu and wasabi, chefs usually serve gyusashi with ponzu — seasoned soy sauce with a vinegar kick — and top the thin beef slices with shiso leaves.

You can also get other parts of the cow served raw. Head to Sendai, five hours north of Tokyo. The city is known for a wide variety of local delicacies, including beef tongue sashimi. According to Fodor’s Japan guidebook, the fatty raw tongue “melts smoothly in the mouth.”

Another cow-made sashimi, rebasashi, used to be available in Japan. The translation of the Japanese word is raw beef liver. The Ministry of Health, Labor, and Welfare banned the selling of it in mid-2012 to prevent food poisoning. But when it was still on the menu, the red organ was served with chopped green onions and a sauce seasoned with grated garlic. However, good news for adventurous West Coast foodies: there is a Japanese BBQ place in San Diego that has the liver-y sashimi on the menu. Also on the menu — beef tripe sashimi.

After the ban on raw beef liver in 2012, some restaurants in Japan took it off the menu, then added a new dish: pork liver sashimi. (Some places had been serving it for years.) But last year, Japan’s Ministry of Health decided to go further and ban the consumption of raw pork liver and raw pork meat.

While raw pork is now outlawed in Japan, it’s available in Australia — though not in a traditional style. Sokyo, a high-end contemporary Japanese restaurant in Sydney, offers pork sashimi, made from kurobuta. The black pork meat is sliced into thin pieces and comes with dashi jelly, mâche and a salty caramel sauce.

When Newsweek published a story about chicken sashimi in 2013, the raw poultry was called “the other pink meat.” The most well-known place for this pink meat in the U.S. is Ippuku, an izakaya-style Japanese restaurant in Berkeley, California.

“Each night we serve about one to two dozens of torisashi,” says Christian Geideman, Ippuku’s chef and owner. “And since we opened this place in 2010, we’ve been serving over 10,000 orders of it.” His famous chicken tartare is made of raw chicken breast, Korean-style chili paste, daikon and raw quail egg. The chicken comes from a small farm in Manteca where Geideman confirms that the farm knows the “right way” to kill chickens (otherwise bacteria will grow on the meat). He explains that, “It has to be very fresh. They kill and chill it very quickly. Also, the knife and the cutting board in the kitchen must be very clean.” For those who haven’t tried it, Geideman describes the texture as “pretty much like raw tuna.”

If you’re already familiar with raw chicken breast, and if you like it, your next step can be thigh meat, gizzard and liver — all raw. Each has its own flavor and texture that chefs in Japan know how to use. Basic breast meat has basic companions — soy sauce and wasabi. Firm thigh meat is good with mustard and salt. Crispy gizzard is matched with grated ginger and soy sauce. Sesame oil and salt are served along with sweet liver.

The practice of eating horsemeat isn’t something new in Japan. It was consumed in the late 1500s when Japan was facing food shortages. But the boom in modern-day consumption began in the 1960s, at the same time that the transportation scene started to change. On streets horses were replaced by cars; in agriculture, machines were also taking their jobs. Horse-farm owners in Kumamoto prefecture were trying to find a way to deal with their animal overpopulation. That was how basashi, or raw horse meat, hit the market.

Basashi earns the nickname sakura niku (pink meat) from its delicate pink color. For the best taste, the raw meat is eaten with grated ginger and sweet shoyu. Shredded daikon and shiso give the mellow meat a clean mouthfeel. Some restaurants in the Kumamoto area go beyond basic meat by serving raw tongue and offals like intestines, heart and drained blood vessels.

Shika means ‘deer,’ so shikasashi is raw deer meat. The color of venison sashimi is so red that it’s easy to assume that the sashimi is raw tuna. It’s not thought of as a weird dish in Japan, but it’s offered in only some parts of the country such as Wakayama.

According to people who have had it, shikasashi is good with freshly grated garlic, ground ginger, chopped leeks and, definitely, soy sauce. The New York Times’ recipe suggests a simpler option: just wasabi and soy sauce.

The Bonin Islands are just about the only place you could go if you are craving kamesashi or sea turtle sashimi. Also known as the Ogasawara Islands, they’re about 600 miles south from Tokyo.

According to Masaya Shishikura, who did his PhD thesis about the islands, the cook begins by cutting the turtle’s carotid artery, then pumps out the blood by pushing its heart continuously. While the fins, plastron and intestine are used for stew — another sea turtle specialty — the breast muscle is reserved for sashi.

Kamesashi isn’t available all year round. The season starts in early April, when annual licenses are issued, and only lasts for a few months. Local restaurants usually serve the red flesh until they run out.

Here comes the last one on the list — also the most bizarre and the least traditional one — frog sashimi.

In December 2012, a video was posted online of a woman enjoying killed-to-order bullfrog at Asadachi, a restaurant in downtown Tokyo known for unusual dishes. It went viral and hit a million views in a few months. The scene in the video, which doesn’t go with the pleasant background music, shows how the large frog was killed, skinned, gutted and cut into bite-sized pieces. All these things happened so quickly that the upper part of the frog was still moving — swinging its arms and making eye contact with the customer — when it was served on an iced plate. The plate also included the lower parts of the frog’s body in pieces, ready to be eaten with soy sauce.

Unsurprisingly, the video caused negative feedback from eaters and people in the Japanese food industry, including chef Mamie Nishide from Japanese Cooking Studio in New York. She gives her comment to Fox News saying, “I don’t want you to think this is Japanese food that the Japanese enjoy. It’s not. This is bizarre.”

Missed the common one in Okinawa; goat sashimi.