A training approach that involves patience, mutual respect and plenty of oats. 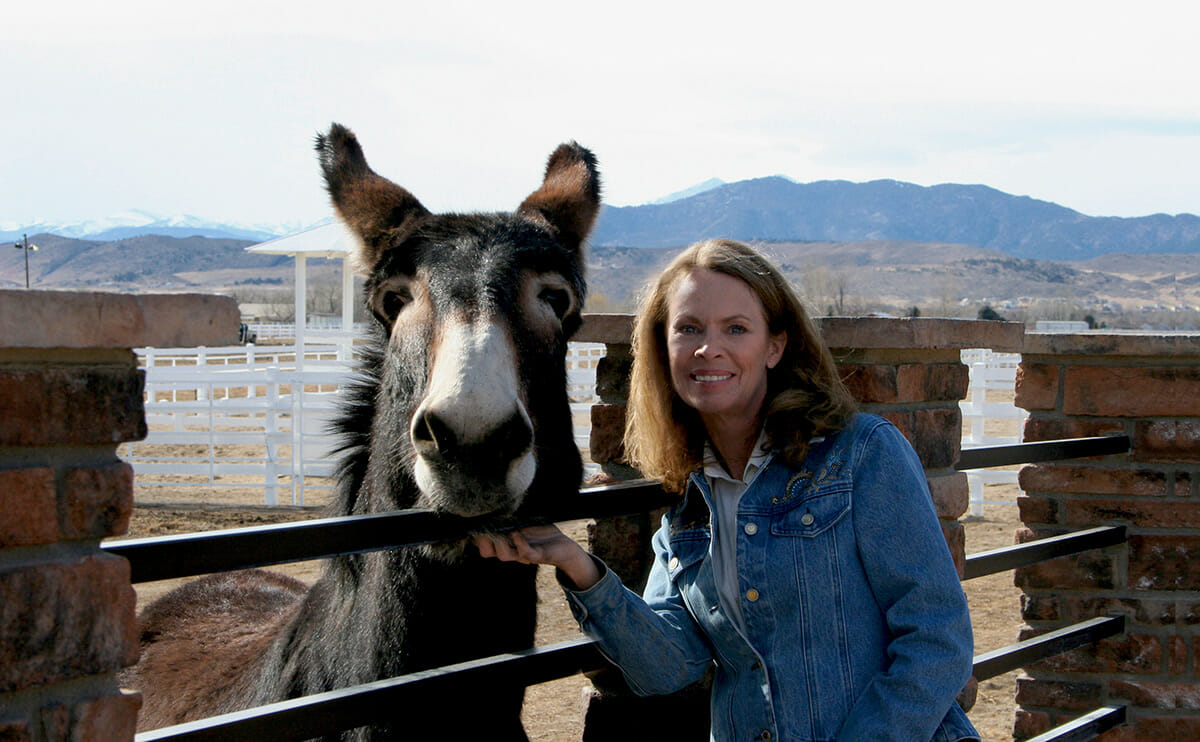 From her Lucky Three Ranch in Colorado, she’s created a small empire of books (including the influential Training Mules and Donkeys: A Logical Approach To Longears), TV shows, charitable programs, and animal welfare and advocacy groups. Her training approach — culled from other equine experts, including Richard Shrake, as well as behavior modification techniques she learned during her time as a psychiatric technician in the ’70s — includes patience, mutual respect and plenty of oats. It works, and now Hodges is a much sought-after sage for donkey owner woes.

Modern Farmer: How did you get started with donkey training?

Meredith Hodges: I started with my mother’s ranch out in Healdsburg. That was my introduction to mules. I found out real quick that the horsemanship training techniques that I had learned before were just too expedited and not detailed enough [for donkeys].

I thought everything that everyone else does, that [donkeys] were stubborn and don’t want to do things. It took me about three months to realize that they are just simply looking out for themselves. They have a very high sense of self-preservation. They’re extremely intelligent, sure-footed, resistant to disease and when they get into a situation, get tangled into a fence or something, they won’t thrash around but wait quietly to get themselves out of it.

Mules do exactly what you teach them. If you chase them they think they’re in a game and supposed to run away. They think it’s pretty funny. They have a tremendous sense of humor and love to humiliate human beings. We’re pretty foolish, we don’t realize we’re getting sucked into a game here.

MH: I realized that every equine we were working with would respond and repeat good behaviors when they were rewarded with the oats. I used to feed the animals who go for [pasture] turnout oats in the morning, and when I turned them out for an hour they wouldn’t want to come in from the pasture. I decided to shift the oats to the evening feeding, and as long as the oats were there waiting for them they always come in to the dirt pen. I never had to chase them, it was just, here they come. I thought, there’s something to this.

MF: What made you think that a reward system might work?

MH: I’d learned behavior modification back in the state hospitals in California in the ’70s [when I worked as a psychiatric technician]. We’d taught people how to get dressed and eat through this reward system training. All I’m doing is modifying this behavior modification to the animals.

I am very polite, I go to their pens, I offer the oats, and say, “Who wants to come with me today?”

I started respecting their space. They have their individual space where they’re penned in at night. I am very polite, I go to their pens, I offer the oats, and say, “Who wants to come with me today?” Once they figured out I had a fanny pack full of oats around my waist they figured out that was pretty cool and now they all come to the gate.

MH: It’s a matter of applying good manners, politeness, and respect of who they are, have a rewards system, be consistent in my approach, and breaking the measures of training down to measurable and doable steps for you and the mule. Instead of teaching them how to do big things all at once, I look at their bodies and their stage of physical development and I think, what is appropriate for this stage? 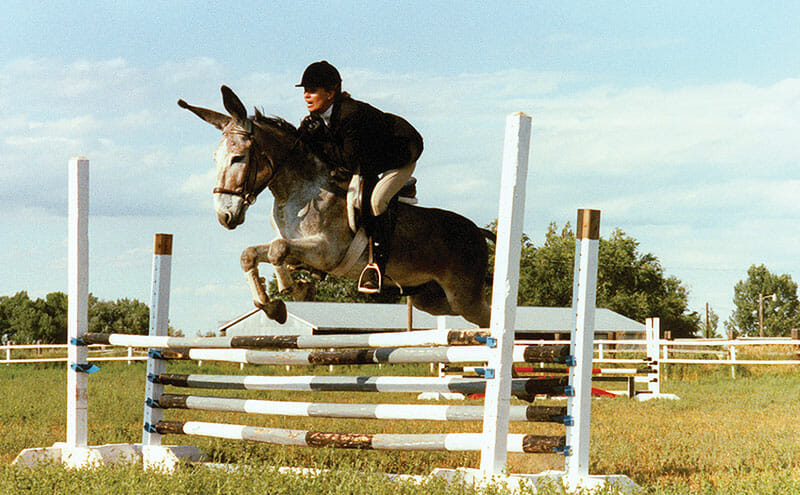 MF: Do they understand verbal cues?

MH: People say animals don’t know anything, they don’t know what you’re saying, it’s the tone of your voice. That’s a line of baloney, I’ll have you know that. I was down at the Western side show with my side[saddle] mule. I opened the brochure and said, “Ciji are you on this page?” and she put her nose on the team picture with me. I thought, well, that can be a coincidence. I said, “Ciji, are you anywhere else on this page?” and she put her nose on her side saddle [photo]. I turned the page to the jack page and said, “Are you anywhere on this page?” She just turned her nose up and said nope.

MF: Do the donkeys have different personalities?

Every mule is different. Beware of generalizations, beware of stereotypes.

I kind of liken these equines to six-year-old kids. They want to play, they like to play, no one’s putting any demands on them to sit at a desk and start writing things, but as you learned about Ciji, they do learn language. They can learn to understand what you’re saying, they just can’t speak it. Physically, they can’t articulate words the way we can. They show through their body language in their own language they talk to you, tell you what’s going on.

When you take things slowly like this you can see the personality traits coming through and you can’t stereotype. Whenever you start making generalizations about any one group you’re wrong, you’re just wrong. The only one you can be sure of is that we’re all different and we all learn things different ways.

MF: What are some of those stereotypes?

I’ve walked up to horses and petted these horses and had the owners tell me, “You shouldn’t pet this guy, he bites.” Well, he didn’t bite me. I was very polite and considerate in my approach. I didn’t just go up and start petting him. I said, “Oh, you’re a pretty guy aren’t you? What a pretty face you have.” I start telling them how nice they are. And they say, oh, tell me some more.

A shoe was hanging off of a mule going into a show. The owner couldn’t get it off. I said, “Let me try.” He told me, “Don’t get your head kicked in. This mule’s really mean.” I said, “Oh I don’t think so, he doesn’t look mean to me.” I said [to the donkey], “You’re going to be really uncomfortable in this class with this shoe hanging there, and you probably don’t like it anyway.” I ran my head down his neck and massaged his back and ran the flat of my hand down his haunches and his leg and he picked up his leg and let me take the shoe off.

This interview has been condensed and edited for length and clarity.

Have a young donkey and need training tips