No longer are all the ducks in a row. 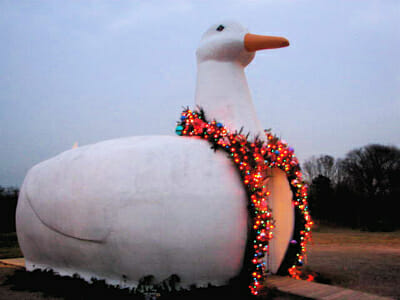 When the clock strikes midnight this December 31, there will be only one remaining farm in a region that once teemed with dozens. Chester Massey and Sons, a 26-acre property in Eastport, is shutting down after four decades in the web-footed biz. (Eastport high school team name? The Ducks.) The last duckman standing will be Crescent Duck Farm in Aquebogue, established back in 1908 with a posse of 30 waddlers.

So just how entrenched was this now-dying industry? The region’s duck farming origins date back to the 1870s, with the introduction of the Pekin duck to U.S. soil. Per the Encyclopedia of American Food and Drink, four white Pekin (now Peking) ducks successfully arrived on our shores from China for breeding purposes (at least 15 others did not withstand the voyage; another five survivors were promptly eaten). After propagating in Connecticut for a time, they traveled on to Long Island, where they became the Adam and Eves of the future farming boom.

Admired for its quick maturation and tender flesh, Long Island’s Peking duck became a favored poultry in the 1900s, especially among restaurant chefs.

Admired for its quick maturation and tender flesh, Long Island’s Peking duck became a favored poultry in the 1900s, especially among restaurant chefs. By the early 1960s, Long Island farms were producing some 7.5 million ducks a year, according to a 2009 Suffolk County report. The boom even led to the establishment of the Cornell University Duck Research Laboratory, formed in 1949 to conduct scientific research into duck disease.

Of course, how does an industry know it’s truly arrived? Why, when a farmer builds a 20-foot-tall, reinforced-concrete duck, complete with Model T Ford tail lights for eyes. The Big Duck, as it’s unoriginally named, was constructed by duck farming Martin Maurer in 1931 as a retail venue for his ducks and eggs, became a must-see U.S. landmark that was later entered into the National Register of Historic Places and even made it to the cover of The New Yorker.

Even at its beak, however, ducking farming wasn’t all it was quacked up to be. (The painful punning begins and ends with that sentence. Pretty much.) In particular, the farming had a detrimental environmental impact due to waste runoff entering the waterways. Starting in the 1970s, the New York State Department of Environmental Conservation set stricter regulations on land use, subsequently causing as many as three-quarters of the farms either to fold or move to the Midwest. Skyrocketing Hampton real estate prices proved another combatant, as did suburban sprawl, especially owing to the pungent aroma that emanated from the holdouts.

The industry persevered through the aughts, though, partly owing to its enduring appeal among four-star chefs. As Chester Massey owner Paul Massey told the New York Times in 2003, “As long as we can make a living doing this, I think we’ll stay here.” Alas, Massey ultimately decided to shut down this year owing to the escalating costs of electricity, feed, and property taxes.

For those who can’t bear to mourn the loss of yet another American agricultural tradition, there is a salve: The Long Island Duck Farming Exhibit, which opened last month astride, yes, the Big Duck, now relocated to Flanders and the centerpiece of the Big Duck Ranch. Lisa Dabrowski, born to a long line of regional duck farmers, spent five years collecting signage, vintage farming equipment, and other ducky ephemera to honor the area’s legacy. “It’s nice to have a place dedicated to the history of duck farming because it was such a big industry,” Dabrowski told The Southampton Press. “It’s a huge part of the island’s heritage, especially on the East End.”

Meantime, Crescent Duck still processes some 1 million ducks a year and has no plans to relocate anytime soon. So any New Yorkers looking to support a yesteryear poultry practice should consider eschewing Tom in favor of Howard this Christmas.

Popular
Yes, the Government Really Does Stash Billions of Pounds of Cheese in...Emily Baron Cadloff
7 Smokable Plants You Can Grow That Aren’t MarijuanaBrian Barth
How to (Actually) Get Rid of Fruit FliesEmily Baron Cadloff
6 Differences Between Llamas and AlpacasAndrew Amelinckx
What to Do With an Abundance of PeppersShelby Vittek
Explore Modern Farmer
Related
Animals
Cattle Ranchers On High Alert After Longhorned Tick Found in MissouriShea Swenson
Plants
Why You Should Grow Almonds and Thyme TogetherShea Swenson
Plants
This Seed Detective Travels the World Tracking Down Lost CropsEmily Baron Cadloff
Environment, Plants
Making the Case for IntercroppingShea Swenson
wpDiscuz
We use cookies on our website to give you the most relevant experience by remembering your preferences and repeat visits. By clicking “Accept”, you consent to the use of ALL the cookies.
Cookie settings ACCEPT
Privacy & Cookies Policy