We Like Beers. So Do (Some) Donkeys - Modern Farmer
Animals, Lifestyle, Plants

Donkeys have a history of beer drinking. 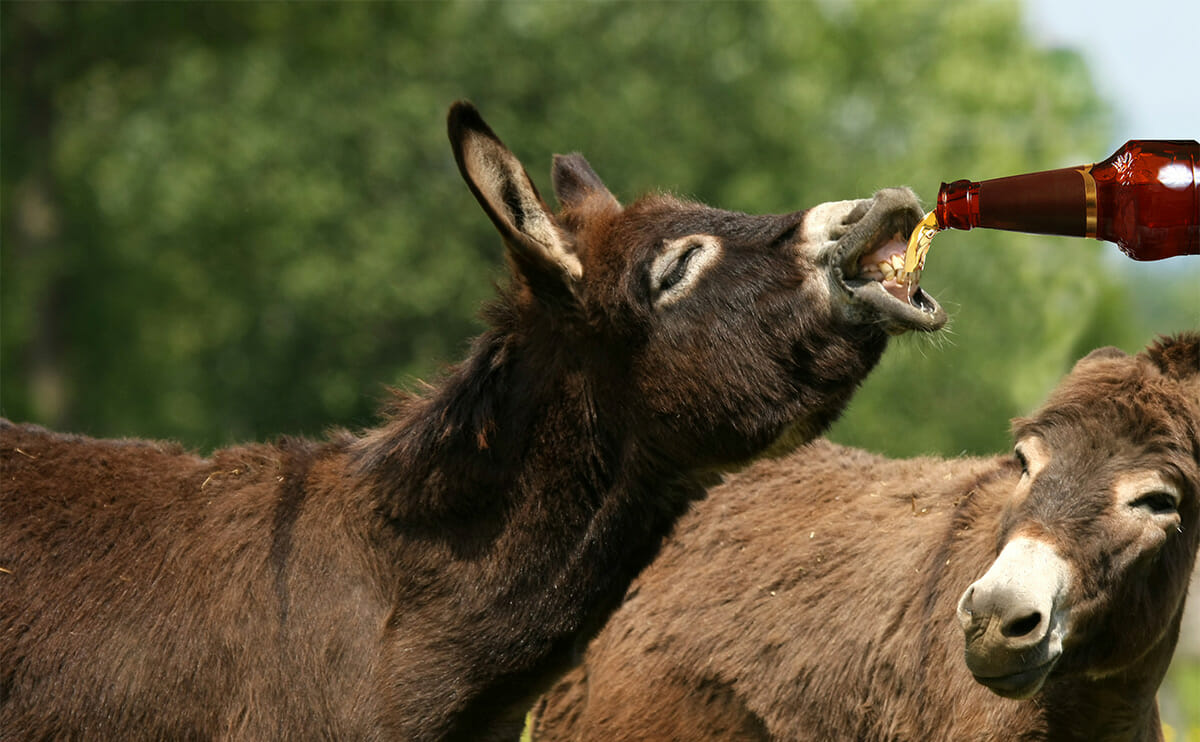 The relationship between donkeys and beer isn’t new. All the way back in 1946, a story in the Milwaukee Sentinel tackled the issue. In November of that year, Thomas, a donkey from Cinderford, became a divisive issue in the British town.

The travels of Thomas, a beer-drinking, bun-eating donkey, became a political issue recently in the English village of Cinderford. Thomas, it seems, thought nothing of making a U-turn in the middle of a block to dun a kindly grocer for a cookie or bun. And if another benefactor hailed him from a pub, Thomas would trot across ”“ regardless of oncoming vehicles ”“ to drink a half-pint of beer … Meanwhile, Thomas grazes at will ”“ on beer and buns ”“ and nobody in Cinderford tries to say neigh.

But Thomas wasn’t the first donkey known for his love of cold brews. Residents of the city of Santa Clara in Cuba had their own beer-swilling donkey back in the 1930s. His name was Perico.

Before becoming a big drinker, Perico had a career pulling an ice cream wagon until his owner bought a truck. Perico lost his job but gained his freedom — and he learned how to survive. He walked around city, made friends with children, and asked for bread in his donkey’s manner.

Though there’s no evidence identifying the first person to introduce Perico to the taste of hops, the donkey was often seen drinking huge amounts of beer. Despite Perico’s struggles with alcohol, he was beloved by all the townspeople, and when he passed away on February 26, 1947, his funeral was all over the news; many people brought flowers to his grave.

Perico would have had a Spanish-speaking drinking buddy if he lived long enough to meet Pancho. This chestnut-colored Cuban donkey developed his drinking habit in the 1970s. He used to wander around the Hotel Mirador in the city of Holguin until one day a guest gave him a beer. Pancho saw his future that day.

A local newspaper reported that Pancho had drank 61,756 beers during his 18 years at the hotel.

Pancho became an entertainer at the hotel, simply by guzzling his favorite drink. He even had his own room there. When he was killed in a car accident in November 1992, a local newspaper reported that he had drank 61,756 beers during his 18 years at the hotel.

After Pancho, the hotel got a new donkey and named him Pancho II. And after Pancho II, it was Pancho III, the one that you will find at the hotel these days. Instead of having his own room like the first Pancho, the current one has a sleeping space next to the bar (a drunkard’s dream).

A few years ago, a video clip of Australian farmer Jens Waldenmayer feeding his donkey beer went viral. In the clip, the donkey hurries to get his cold bottle of brew, a treat that he got every other day. This routine started when the donkey got a few sips from a neighbor. Waldenmayer told a reporter from Northern Territory News that, “He loves his beers. He drinks Light Ice or XXXX, he is not fussy.”

Unlike the Australian donkey, Rosie from Derbyshire in the U.K., was quite particular about her brews. When she turned 54 in 2010 — making her one of the world’s oldest donkeys — Rosie’s owner told the Daily Mirror that part of her diet was a third of a pint of Guinness stout twice a day. The donkey had more appetite when the beer was mixed into her food, according to the owner.

After reading about these beer-drinking donkeys, three obvious questions arise. First, do donkeys truly like beer? Second, is beer good for donkeys? And finally, could donkeys get drunk?

In regards to the first question, it’s a pity we don’t speak donkey language. As for the second and the third questions, we asked Laurie Lawrence, a professor in equine nutrition at the University of Kentucky.

Could donkeys get drunk? Yes, but they might need more bottles than humans.

According to Lawrence, beer contains vitamins, carbohydrates, protein and minerals; she has heard of people mixing beer in a horse’s feed to improve appetite. The professor explains that “the amount of nutrients would be very small because beer is mostly fluid. But it might be used to enhance the palatability of the diet.” So in moderation, beer might help more than it hurts (a lesson for all of us).

On to the next one: Can donkeys get drunk? The answer is yes, but they might need more bottles than humans. “The initial portion of their digestive tract is much like ours, so a 200-pound donkey would probably be affected by beer the same as a 200-pound person,” says Lawrence.

We also asked her opinion on the first question (we still wish we could talk to donkeys): Do donkeys like beer? The professor couldn’t confirm or deny, but, based on observations of ponies and horses, food preferences of these animals are often affected by familiarity. “A donkey that has never fed beer before might discriminate against it, but a donkey that has been adapted to the beer for a while might really like it.”

Well, that sounds very human-like to us.