The Dark Side of Donkey Basketball - Modern Farmer
Animals, Lifestyle

The Dark Side of Donkey Basketball

Playing basketball with donkeys is an abuse of donkey rights, according to some. 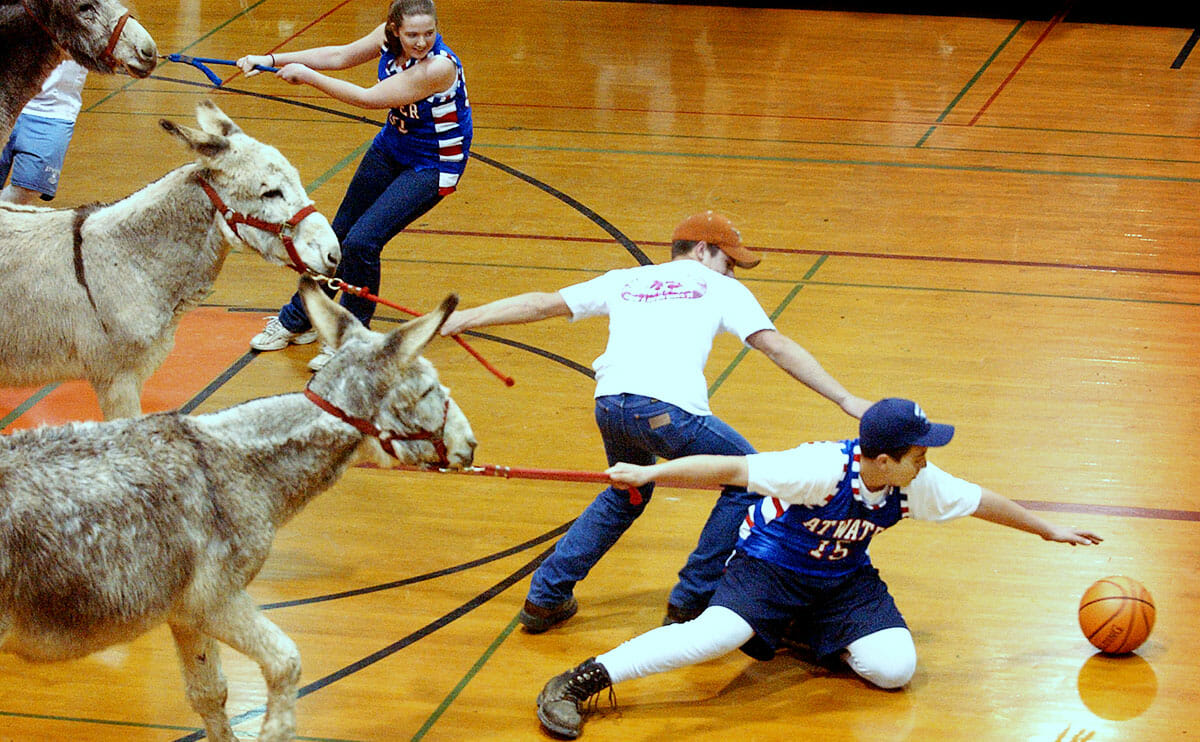 Donkey basketball, or donkey ball, is not uncommon at school fundraising events around the country. The game represents basketball in that it’s played on an indoor court (donkeys wear special booties to protect the gym floors) and the goal is to get the ball into the hoop. That’s pretty much where the similarities end. Human participants need to sit astride donkeys when they’re shooting and passing; dribbling, for obvious reasons, isn’t part of the game.

Donkeys can be an obstinate bunch, and that unpredictability — the fact that you never know when the animal will stop or change course — keeps the game funny and interesting for participants and viewers.

Sounds like a lot of dumb, innocent fun, but the game has its dark side. The Humane Society of the United States and the American Society for the Prevention of Cruelty to Animals have come out strongly against the sport. PETA claims that donkey basketball teaches kids to be cruel to animals, and that the game represents unfair treatment of the beasts because they’re “dragged, kicked, and punched by participants who have no animal-handling experience.”

Donkey ball can be dangerous for humans, too. There are several cases of people suing after falling off donkeys or being otherwise injured by the skittish beasts. A man in Waterloo, Illinois, received $110,000 for injuries sustained in a game in 1997. In Florida in 2003, a fifth-grade teacher fell off a donkey during a game and later settled a lawsuit against the Diocese of St. Petersburg.

The basketball-playing donkeys are provided by a handful of small companies that travel throughout the United States.

PETA urges people to protest the game when it’s being proposed as a fundraising option, and the word seems to be getting out. There was a flare-up of controversy last year at a Lake Township, Ohio, school that received a flood of letters in protest of its annual donkey-ball fundraiser. The school district is assessing whether to break tradition and stop the event in the future.

Proponents argue that the game is harmless fun, on par with pony rides at the county fair. Camie Heleski, an animal science instructor at Michigan State University, told the New York Times the worst part is just that “it is probably somewhat confusing to the donkey.” Still, many objective spectators who’ve witnessed a game — people far removed from PETA — have complained about the donkeys’ treatment on the court.

The sport’s origins are murky, but it’s been around at least since the 1930s, according to the Times. The basketball-playing donkeys are provided by a handful of small companies that travel throughout the United States. One of the oldest, Buckeye Donkey Ball, has been in operation since 1934 (the company also provides services for donkey baseball, donkey racing and regular donkey rentals, in case you were in the market).

Donkey ball’s infiltration of American life has even resulted in a parody in The Onion; a SportsCenter-esque bit about a two-year-old donkey who was called up to the pros. The donkeys in that spoof aren’t cartoons, but they aren’t far off. When you remember that the game forces real animals to participate in basketball whether they want to or not, the whole sport may seem a lot less amusing.

They had it at are school and the people riding the donkeys would pull them around and hit them. It is just down right horrible.

Forcing donkeys to play basketball when they don’t want to? Did anyone confirm that with the donkeys? But its alright to ride horses for leisure because they love that? Or pull wagons? Or deliver mail? Or do police work in NYC?

This is down right abuse!!! Please help stop such activity like this in our country! We’re better than this?there’s nothing good or funny about this time to make a stand and STOP animal abuse they are GODs creations?

If you think this is bad, then you should spend a day on an Amish farm. You’ll actually see abuse to animals there

I’m at a game right now and it’s great. Get over it.

Send me some information about the donkey basketball . I’m with the Marshall County Sheriff’s Office.

Popular
Could New York Become the Mushroom State?Sara Foss
The Rise of Virtual Farmers MarketsLeah Borts-Kuperman
7 Smokable Plants You Can Grow That Aren’t MarijuanaBrian Barth
Record-Breaking Egg Profits Prompt Accusation of Price GougingClaire Carlson, The Daily Yonder
New Solar Panels Allow Farmers to See the LightNaoki Nitta
Explore Modern Farmer
Related
Features, Food Security, Labor
The Rise of Virtual Farmers MarketsLeah Borts-Kuperman
Environment, Labor, Water
California Farms and Farmworkers Attempt to Recover From Record FloodsNaoki Nitta
Books, How-To, Lifestyle
How to Turn Your Garden Into a Business, No Matter the SizeEmily Baron Cadloff
Food Security, Labor, news
A New Egg Co-operative Has Hatched in the Western U.S.Lindsay Campbell
wpDiscuz
We use cookies on our website to give you the most relevant experience by remembering your preferences and repeat visits. By clicking “Accept”, you consent to the use of ALL the cookies.
Cookie settings ACCEPT
Privacy & Cookies Policy