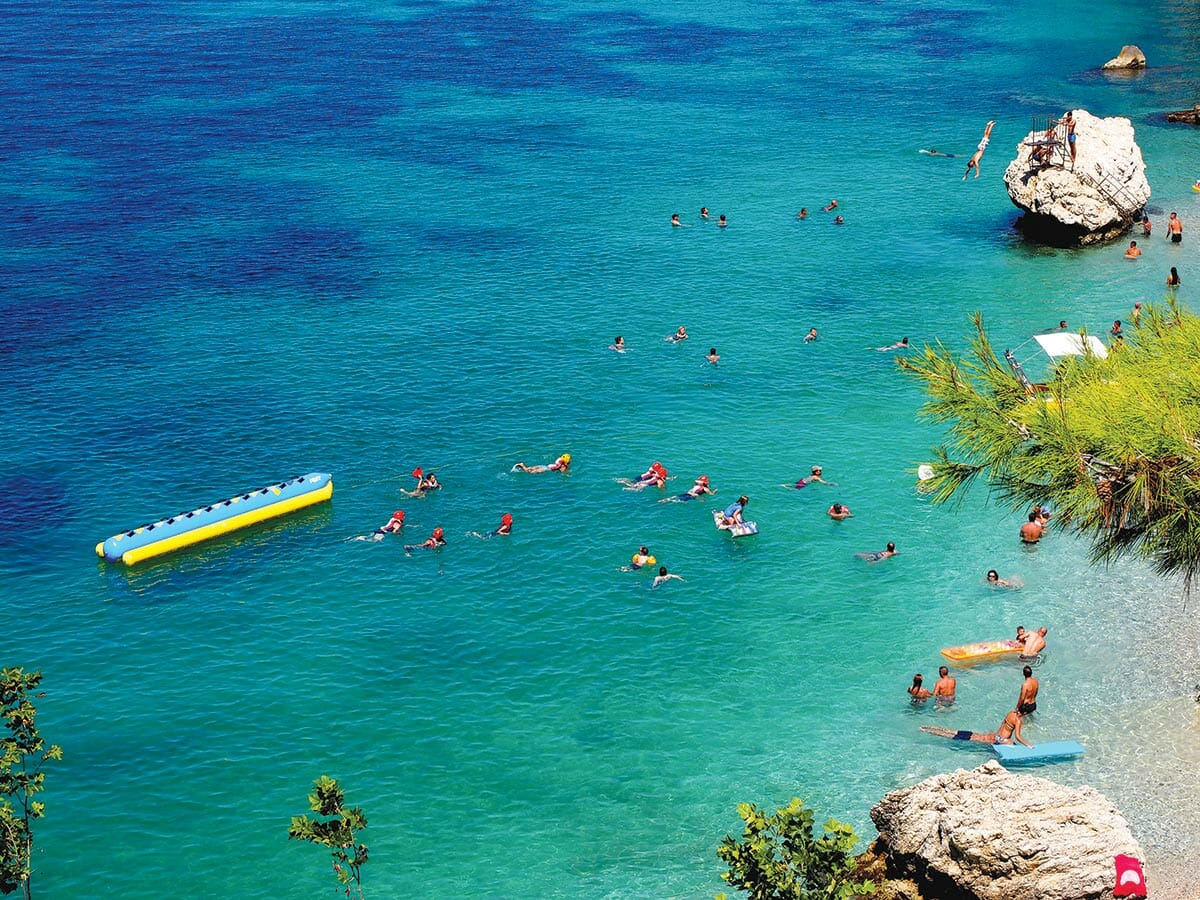 If you have to ask why one would choose to go to Albania, then you deserve to spend your holiday on the crowded shores of Greece. As for the rest of us, we get it – we hear the stirring among the rugged, dusty hills and porcelain shorelines of this other Mediterranean nation. Albania’s one-of-a-kind culinary scene and genuine slow-food network is straight from the pages of a locavore fairytale.

But sorry, you will not find menus boasting free range, local or organic. That’s because you’d be hard-pressed to find a meal anywhere in this 11,000-square-mile nation (roughly the size of Maryland) that hasn’t been grown organically on the very property where it’s being served. Wedged between northern Greece, Kosovo, Macedonia, the mountains of Montenegro and the warm waters of the Ionian and Adriatic Seas, Albania is a small but fiercely proud country with a unique history, language and cuisine, one that is heavy with Italian and Turkish influence, yet unmistakably Albanian.

For centuries, Albania has been conquered, invaded, carved up and isolated, creating a people who have learned to get by with what they have, which, fortunately, is a lot. From grapes to peppers, goats, fish and sheep, Albanian food is all about fresh ingredients and tried-and-true recipes that will leave you in awe of how good simple food can be.

Start from the capital, Tirana, and head southeast through the tree-dotted mountains, where you’ll find lots of hearty veggies, cheese and lamb. As you near the coast, heading northward from the Greek border, fish begins to take over. Squid, bream and bass are common throughout this region, as are pasta and pizza (Italy is only 50 miles away from some southwest areas). 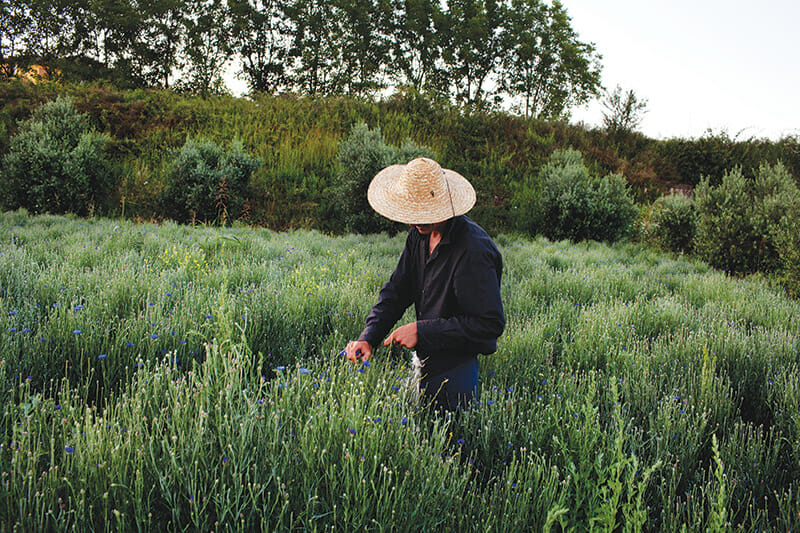 What does a typical Albanian food experience consist of? To start: You’ll probably be sitting at a thick oak table overlooking the blue-green Ionian Sea with the strong scent of wild sage in the air. Next, your table is filled with dips, bread and the ubiquitous salad of southeast Europe – a heaping bowl filled with large chunks of fresh tomato, cucumber, salty feta and green olives. Your main course is grilled lamb, served with heaping plates of roasted eggplant and zucchini, or fresh whole fish and a healthy portion of Burek (a local savory pastry made with spinach and minced meat). Finally, it’s time for a generous shot of raki – a local grape spirit, a natural digestif and the preferred way to finish up a true Albanian feast.

FARMA SOTIRA – GERMENJ
Hidden deep within a dark pine forest on a steep mountain flank near the Greek border, Farma Sotira is a working trout farm with several small log cabins – complete with power and hot showers – set in a sub-alpine meadow. Perched over the trout stream that runs through the farm is a rustic stone dining area. Enjoy a glass of the farm’s own red wine, or try your hand at fishing a trout out of the water and dine on the freshest, most delicious fish minutes later.

LIFE GALLERY HOTEL — KORÁ‡Á‹
The Life Gallery Hotel and sleek Avenue 55 bar’is an unexpected dash of modern architecture situated among the hulking relics of communism that dominate the mountain town of KorÁ§Á«. The hotel has 19 minimalist-chic suites and a very cool speakeasy basement bar. Relax on a spacious balcony or head down to the shady, green patio bar for a pint of Albania’s most popular beer, KorÁ§Á«, which is brewed down the road. Or, try a raki-based cocktail, another local delicacy.

HOTEL MANGALEMI – BERAT
Hotel Mangalemi has eight beautifully furnished rooms inside a restored 18th-century Ottoman mansion. The mansion, originally constructed with stones from the (nearby) ancient Greek city of Apollonia, has been updated with modern stone-and-glass bathrooms and private balconies built into its sloping, tiled roof. Mangalemi’s terrace restaurant serves up tasty, traditional Albanian white bean soup and freshly baked bread. Its location faces west over Berat, known as the “city of a thousand windows” for its beautifully maintained Ottoman old town district packed with multi-story white stucco mansions that blend together to look like one massive structure.

HOTEL LIVIA – BUTRINT
Just a short walk from the ruins of the ancient Greek city-state’of Butrint – a UNESCO World Heritage Site – and with views of the Greek island of Corfu, the open-air dining room at Hotel Livia is hard to beat. Prepare for huge servings of fresh seafood linguine and locally harvested mussels slathered in sweet white wine and hand-churned butter.

KUJTIMI – GJIROKASTÁ‹R
Tucked off a cobblestone alleyway under the shadow of GjirokastÁ«r’s towering, 12th-century castle, Kujtimi’s oak-shaded patio is a great place to try a glass (or three) of Albania’s most popular red wine, Shesh I Zi, and the city’s most famous dish, qifqi, a lightly fried rice ball bursting with fresh pepper, mint and feta cheese – a dish not to miss!

HOTEL MILLENNIUM – TUSHEMISHT
Perched over placid Lake Ohrid, the waterfront restaurant at Hotel Millennium is a great place to watch the sun set over Europe’s oldest lake. Specialties include fergese, a vibrantly red dish of slow-cooked peppers and fresh feta that spreads perfectly on the ever-present, stone-baked bread like a spicy Mediterranean cream cheese, and Ohrid trout stew, a savory slurry of fresh fish and fire-roasted tomatoes in a thick veggie broth.

CENTRAL BAZAAR – KRUJÁ‹
The KrujÁ« bazaar, a tightly knit set of wooden stalls on a narrow, cobblestone street leading to KrujÁ« Castle, is one of Albania’s largest handicraft markets. It’s been in operation since the 15th century and is now under federal protection as an important site of Albanian history and heritage. If you’re in the market for a locally made handicraft, this is the place to be. Make sure not to leave KrujÁ« without a Pils – the traditional white, felt cap worn all over Albania with a small brim and jaunty nubbin on top.

KORÁ‡Á‹ OLD BAZAAR – KORÁ‡Á‹
KorÁ§Á«’s old bazaar is now just a fraction of the’size of its ancient iteration, yet it remains impressive. Join the locals bright and early to get the real experience as you navigate the maze of cloistered wooden stalls, salt sellers and utilitarian cheese stands. Search for something special to take home, like a bottle of mulberry raki or a jar of buckwheat honey.