How Turkeys Got Broad, White Breasts

The steady march of technology and innovation in the 20th century led to the development of the Broad Breasted White, the breed that now dominates the market. 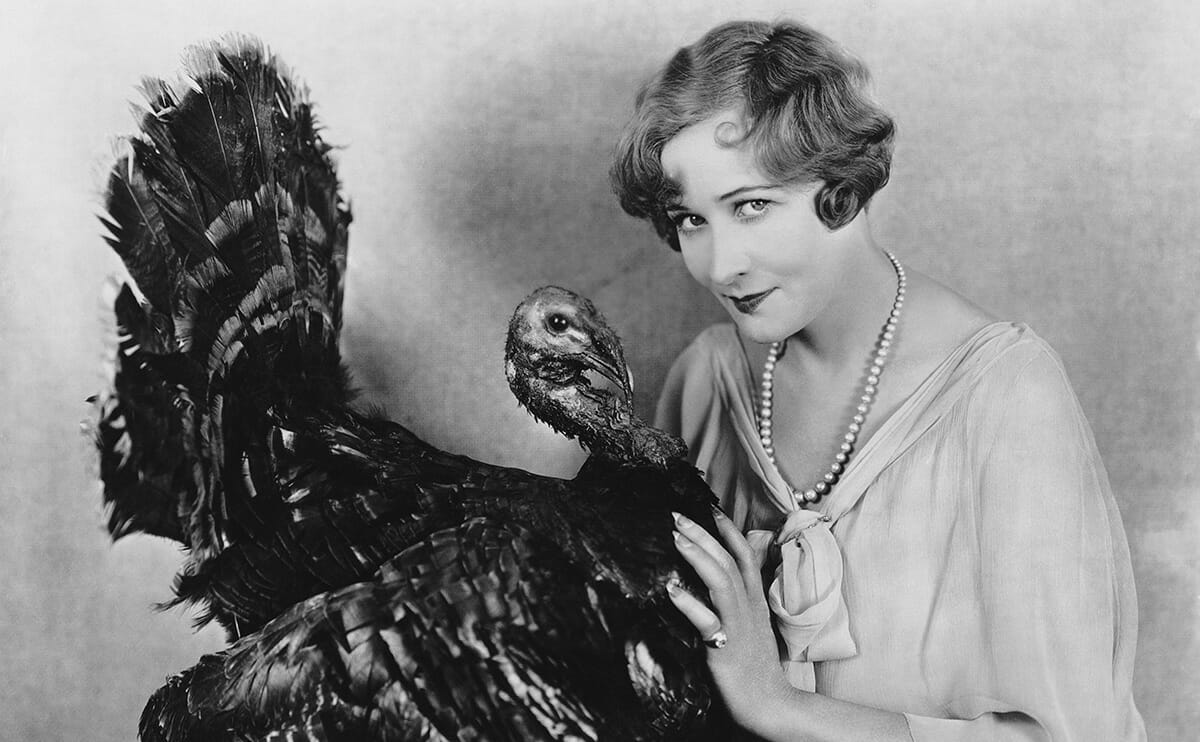 We can thank the steady march of technology and innovation in the 20th century, which led to the development of the Broad Breasted Whites. Efficiency is the raison d’etre of this breed, which now dominates the market. The birds were bred specifically to produce maximum meat at minimum cost. Because of the bulk of their hefty breasts, they notoriously cannot mate naturally; the hens must be artificially inseminated.

But in early America, turkey farming was a small-scale affair. Popular breeds included Bourbon Red, Narraganset, White Holland and others. They actively foraged for most of their food, and did not gain weight rapidly because they burned calories looking for lunch. Most farmers raised a few birds for their families, perhaps a few more to sell to neighbors or markets.

Improvements in transportation and freezing technology enabled a cottage industry to become a modern industry. In the early 1900s, farmers cannily shifted from charging a flat fee per bird to a per-pound model, and this made raising plumper birds more lucrative. With refrigerated railroad cars hauling frozen turkeys, the range of distribution expanded vastly. It took money to make these things happen, giving larger operations with more capital an advantage.

Turkey breeding enthusiasts, who showed their best birds at American Poultry Association events, in part bred turkeys for their colorful plumage. Consumers didn’t care about pretty feathers, though, since they never saw them. As turkey production took off, breeding programs focused instead on packing as much meat as possible onto the bird’s frame. Breeders in the late 1920s began breeding birds that grew rapidly and had large breasts; the nickname for one variety was “Bronze Mae West,” but the industry eventually agreed on calling these new birds Broad Breasted Bronze.

Improvements in transportation and freezing technology enabled a cottage industry to become a modern industry.

One player in this history was my husband’s grandfather, the late Victor Ryckebosch. A strategic thinker and inherent entrepreneur, as a young man Vic noticed that turkeys were a luxury item raised in small production. He seized the idea of breeding fleshier birds, and starting in 1929 kept an incubator in his Santa Monica apartment, where he raised poults (baby turkeys) for six weeks before transferring them to his family’s farm in the high desert of the Antelope Valley, about 80 miles northeast of Los Angeles.

Vic’s business grew considerably. “Broad Breasts in the Land of the Joshua Tree,” reads an article preserved in a family scrapbook that features a photo of turkeys on the ranch resting under the shade of said Joshua trees. Vic eventually spread out the operation and formed a turkey-ranching co-op, eventually working with 300 growers. The birds were sold under the Lancaster Farms brand. A December, 1948 article in the County Chronicle reported, “He farms the birds out to other ranchers in a share basis and provides them with feed. This leaves the Ryckebosch place free for breeding purposes, hatching and the sale and shipment of eggs.” This shift toward vertical integration was happening all over the country, not just at Vic’s farm.

The Broad Breasted Bronze ruled the roost, so to speak, for only about two decades. It gave way to the now-ubiquitous Broad Breasted White, developed in the 1960s. Its paler, cleaner-looking carcass especially appealed to consumers. According to the National Turkey Federation, a hen takes about 14 weeks to get to a post-processing market weight of 17.5 pounds; toms take 18 weeks to reach a market weight of 38 pounds.

Now, more than 99 percent of American breeding stock is tied to a few strains of Broad Breasted White. For chefs and foodies, this is a culinary travesty; Broad Breasted Whites are not known for flavor. But as pointed out in”The Turkey: An American Story,” by culinary historian Andrew F. Smith, “Americans consistently choose lower prices and greater quantity in their food. That the modern turkey has less flavor than its forbearers seems to be of little interest, for consumers usually add flavoring and condiments.” That is, we like our turkey to be a blank vehicle for spice rubs, gravy and cranberry sauce.

For chefs and foodies, this is a culinary travesty; Broad Breasted Whites are not known for flavor.

Taste aside, the dominance of the Broad Breasted White is troubling with regards to genetic diversity. The Livestock Conservancy says that of the 10 species of domestic farm animals that are the focus of their work, “none is more genetically eroded than the turkey.” Genetic diversity makes it easier for breeders to adapt animals for new environments, and it also helps with maintaining strong immune systems, fertility rates and longevity. The one breed we now overwhelmingly rely on is prone to sickness and can’t reproduce without human intervention.

All of the family scrapbook articles about Vic, which range from the 1940s to the 1960s, blithely focus on progress. They relish details about increased production and profits, the American Dream manifesting right there on those yellowed pages of newsprint. It’s been years, however, since a Lancaster Farms turkey graced tables on Thanksgiving Day. The sizable business Vic started went under in the 1990s, unable to compete with the even larger corporations that eclipsed it.

It’s not uncommon now for grocery stores to offer free frozen turkeys around Thanksgiving with transactions above $100 or so. We consumers think of turkeys not as farm animals, but just another mass-produced item on a shopping list. While there’s a small movement of farmers and cooks working to bring back heritage turkeys, the bland, broad-breasted gobbler most of us have grown up knowing will remain our generation’s touchstone. Now, can you please pass the gravy?