Mobile Cider Mill is a Game Changer for Orchards 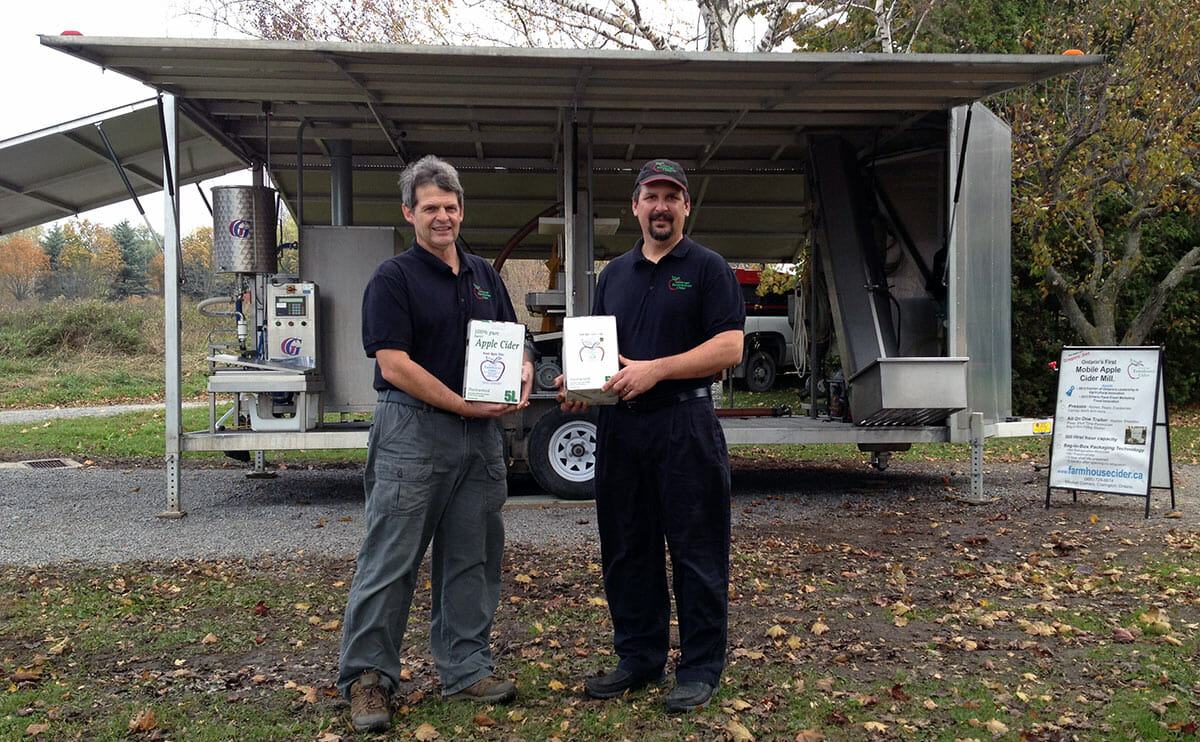 Their “mobile apple cider mill” is stationed on a 20-foot trailer, powered by a 24-kilowatt, three-phase diesel generator, stacked with stainless steel equipment with folding walls. The press is one of four in Canada and the first of its kind in Ontario.

The mobile apple cider mill came to be a couple years ago when the Geissberger brothers began looking to upgrade their pressing equipment. They contacted a fruit processing equipment manufacturer in Germany and were put in touch with the Canadian distributor, Frank Dieter.

“We got in touch with Frank and he says, ‘I have got something you need to take a look at,’” Garry says.

When Dieter, a fruit liqueurs distiller, moved from Germany to British Columbia he was surprised at the amount of apples, pears and cherries that were being wasted each season. He came up with the idea of a portable cider-making unit and fifteen years later, the first mobile mill was built. Since then, Dieter has built and sold four of the machines.

Local orchards have been bringing their apples to the Geissberger farm for more than 40 years. But the orchards could only transport so many bushels of apples and it meant a lot of driving. Many orchards have never been able to produce apple cider because the cost of transportation and refrigeration is too high. But the mobile cider mill changes all that.

The orchards could only transport so many bushels of apples and it meant a lot of driving.

“With the trailer, we thought, ‘This would sure help the orchards out and it would help us out,” says Garry. “We could just pull into their yard, set it up and pretty much press the season’s worth for them.”

The mill is made up of three main pieces of equipment and there are five steps in the process: washing, shredding, pressing, pasteurizing and packaging.

First the apples are sorted and cleaned using a high-pressure washer. The apples are then tossed into a shredder, which grates the apples into a mash. The apple mash then falls into a hopper and is pumped through a tube that runs along the floor.

When one of the Geissberger brothers is ready to press the mash, he steps on a pedal and the mash is pumped out of the tube and onto a large rack and cloth press. Once he has seven layers of mash and cloth, he uses a hydraulic pump lever to press the juice from the apples.

Although the cloth filters out most of the pulp, the juice then passes through a screen, to strain out any debris. From here, the cider travels through another tube and into a holding tank before being pasteurized.

Then the juice is packaged — though not in the traditional, charming cider jug. Instead, the Geissbergers use the kind of bag-in-box packaging that many wineries have turned to. The cider is stored in a 5-liter, vacuum-sealed plastic bag, with a spout for pouring and each bag is placed in a cardboard box.

Because the cider is vacuum sealed and doesn’t come in contact with the air, it can be stored for one year and lasts three months after you take your first sip — no refrigeration or preservatives needed.

With both of the Geissberger brothers manning the machine and one other person tossing in apples, the mill can process up to 40 bushels of apples and produce 132 gallons of cider each hour.

“Mind you, you’re hustling,” Garry says. “You’re not looking around at the scenery or nothing.”

The orchards can then sell the cider to friends, family and neighbors and at farmers’ markets, farm stores and roadside stands. The mobile mill has not only turned into a more efficient business model for the Geissberger brothers, but it has also created additional revenue for the apple orchards.

This year, the Geissbergers have taken their mobile apple cider mill to nearly 20 farms throughout southern Ontario.

“It sure has taken us around the countryside,” Garry says.

The Geissbergers are finishing up the apple cider season but will press their own cider year round. A little cold won’t will deter these apple farmers.

“Last year, the coldest we worked in was five above freezing and it sure was cold. You could just see the diesel fuel going through the pasteurizer — like pull the tanker truck in and just hook it up! Yeah, it was snowing that day,” Garry says, laughing. “It was nice.”