How Poppies Became a Symbol of Remembrance

Reviewing the legacy of the veteran poppy. 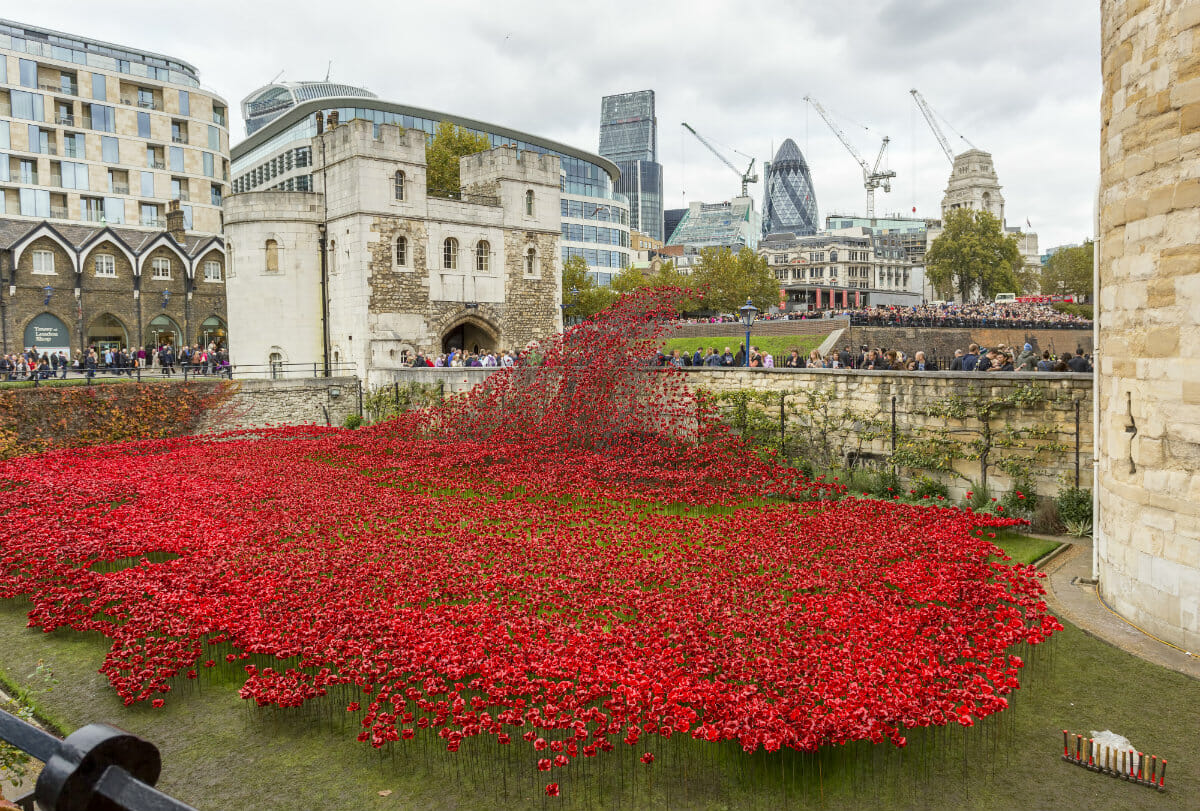 Usually the lowly Papaver rhoeas (the red poppy) doesn’t make the news as much as its narcotic cousin Papaver somniferum (opium poppy), but once a year — and especially this year, the centennial celebration of World War I’s inception — the red poppy takes center stage. You can’t go anywhere in Britain without seeing paper red poppies tucked into lapels or even printed on a hijab.

The poppy became a symbol for the casualties of war when Lieutenant Colonel John McCrae penned his famous poem “In Flanders Field” after being moved by the sight of red poppies growing wild over soldier graves. The red poppy, which is sometimes called red weed, is tough and grows thick, allowing them to grow in the middle of the battlefield, surrounded by death.

The first poppy was worn in remembrance by Moina Michael, a worker at the YMCA Overseas Headquarters, in 1918. She came across McCrae’s poem in Ladies Home Journal and made a silk poppy as a tribute. The trend quickly spread and in 1920 the American Legion made it the official symbol of remembrance. In 1922, the Veterans of Foreign Wars distributed the first batch of poppies on a national scale.

“While poppies were given official status in the States, Great Britain would solidify their place in popular culture.”

While poppies were given official status in the States, Great Britain would solidify their place in popular culture. In 1921, the newly formed British Legion ordered their initial nine million poppies. This was the first “Poppy Appeal,” raising over 106,000 pounds for charity. The next year a factory was set up in London to produce the paper poppies.

The symbol of the poppy quickly spread beyond the U.S. and England, with many commonwealth countries also adopting the poppy, but all in their own way. Scotland makes their own poppies for Remembrance Day, but unlike the English poppy, the Scottish poppy, made by Poppyscotland, do not have a green leaf attached. The reason they say, “apart from being botanically incorrect it would cost £15,000 to make leaves for all poppies – money we feel is better spent on veterans. We might be slightly biased but we think the Scottish poppy looks nicer too!” Australia, New Zealand and Canada also have their own poppies.

The poppies are still made in the same factory and in a similar manner to how they were produced 92 years ago. The factory employs 44 people in-house and 90 others work from home, including many disabled veterans. They are responsible for producing the over 36 million poppies that are now sold in England, Wales and Northern Ireland.

Even after public outcry, Snow refused to wear a poppy, calling the backlash ‘poppy fascism.’

Poppies have been so popular over the last hundred years that they have inevitably been politicized. “If you watch the BBC around this time every newscaster will be wearing a poppy and some have complained about it,” says Richard Aldous, professor of British History and Literature at Bard College. Jon Snow of Channel 4 controversially refused to wear a poppy, and even after public outcry refused to back down, calling the backlash “poppy fascism.”

That’s not the only poppy controversy. For some, there is “a fear that is celebrates war. That was particularly popular in the 80s and 90s, when there was a move towards a white poppy instead of a red poppy, but it never really took off,” says Aldous. But he adds, “Those who think along those lines are in the minority.”

For most, the red poppy is a simple and minimal tribute to those who laid down their lives in the service of their country — on either side of the pond. “By and large it isn’t a political issue,” says Aldous.

Related
Lifestyle, Plants
It’s Time For Fashion to Talk More About Regenerative AgricultureEmily Baron Cadloff
Animals, Plants, Water
These Tiny Crustaceans Are the Bees of the SeaShea Swenson
Plants
How Do You Attract Rare Birds and Bees to Your Garden? Add...Shea Swenson
Books, Food & Drink
In Michael Twitty’s Kitchen, There’s Room to Be Your Whole SelfEmily Baron Cadloff
wpDiscuz
We use cookies on our website to give you the most relevant experience by remembering your preferences and repeat visits. By clicking “Accept”, you consent to the use of ALL the cookies.
Cookie settings ACCEPT
Privacy & Cookies Policy