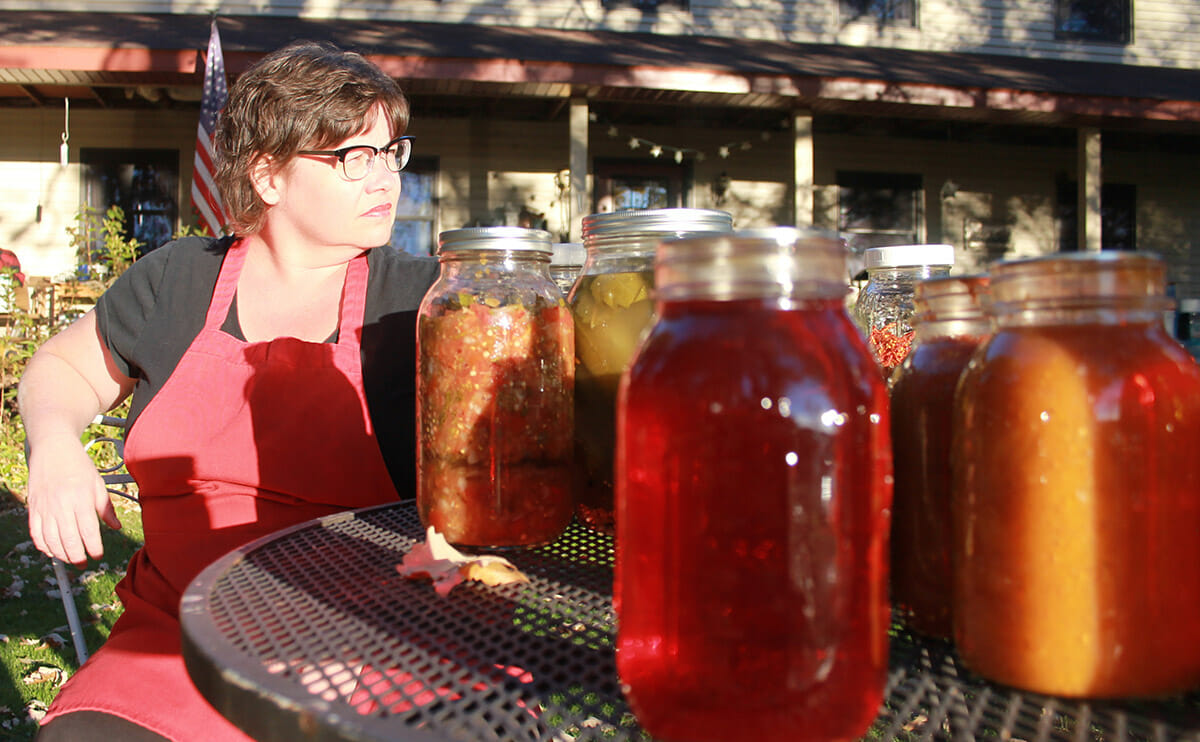 On October 3rd, Kristan Martin looked out on her 7,000-square-foot northern Wisconsin garden to see the brassica and squash dusted with a light powdering of snow. While the snow was early and unwelcome, it was something of a new norm. Last year this area experienced greater snowfall and more frigid temperatures than seen in the past several decades, with many weeks in late winter dropping to twenty below zero or lower. It is not a climate – nor economy – for the faint of heart.

In Northern Wisconsin, the median household income ranks nearly 50 percent lower than the state average, with the poverty rate up to 182 percent higher than the Wisconsin average. Here, thrift is a virtue and home economics can make or break a family.

This region of the state is also overwhelmingly rural, with stores few and far between: While there are a few food co-ops that help to fill the healthy food gap, when that food is accessible, it’s expensive. For families living on the economic margins and committed to a healthy diet, it’s often more practical to garden, forage and hunt than it is to go for an exclusively store-bought diet.

“We probably eat more wild foods in the winter than we do in the summer.”

However, economics are only part of the reason why Martin and her husband, Art, farm a small homestead outside the unincorporated town of Frederic, about an hour and a half northeast of Minneapolis. The larger reasons can be traced to a love of nature and an enthusiasm for cooking, experimenting with ingredients and adventurous eating.

For many individuals, living on a fixed income can mean purchasing cheap foods that are processed or unhealthful – boxed pasta isn’t just quick to make, it’s also affordable. But the Martins made a radical decision to live off the surrounding land. It’s not a choice of ease or convenience, but the couple has managed to eat the kind of local, artisanal diet that many associate with big receipts at Whole Foods.

By the time canning is over this fall, Martin will have put up around 500 jars of organic homegrown or wild foods, including crab apple juice, cranberries, venison, sumac jelly, tomato sauce in three colors (white, yellow, red), zucchini relish, and dozens of other varieties of foods. And this tally doesn’t include cold storage of squash, carrots and potatoes, or her freezers full of nearly 200 bags of puffball mushrooms, kohlrabi, broccoli, peppers and beans. Nor does it include her bubbling lacto-fermentation crocks of pickles, cauliflower, kraut, kimchi and hot peppers, or her pantries full of dehydrated tomatoes, apples and peppers.

“If there’s a blizzard, I don’t care,” says Martin. “I honestly don’t have to leave this place for days. I’ve got enough food that I can feed my family for a very long time. With the weather we’ve been having up here, its just security for me.”

For her, fall-food preparation is a way to fill even the most frigid months with summer-tinged joy. Popping a jar of violet jelly to spread on whole grain toast opens up a world of flavor and color beyond winter white.

A few hours east of the Martin’s homestead sits the Lac du Flambeau Ojibwe Reservation, home to Biskakone Greg Johnson and his family. Johnson is a language and culture teacher in the Lac du Flambeau Elementary School, as well as a traditional Ojibwe artist who makes birchbark baskets, beaded moccasins and other works of art. Biskakone also believes strongly in honoring his Ojibwe hunter-gatherer roots.

His family’s hyperlocal diet is a reminder that eating locally is no new fad.

“We live seasonally: we have fish in the winter and spring, foraging once the forest comes alive in the spring, and we harvest anything we can find all summer,” Johnson says. “Then it circles back into [wild] ricing, hunting, trapping and snaring. That’s where a lot of our diet comes from, our foraging and hunting. ”

For Biskakone and other tribal members, hunting, fishing, manoomin (wild rice) and gathering wild plants, essentially eating by ningo gikinonwin – the four seasons – are ways to celebrate their ancestors and strengthen their community and families.

‘If there’s a blizzard I don’t care. I honestly don’t have to leave this place for days. I’ve got enough food that I can feed my family for a very long time.’

Similar to those in other rural northern Wisconsin communities, tribal members here rely on wild foods to supplement their diets. Whether this supplementing is a result of health concerns or economic belt tightening, it’s a winning proposition.

“I always tell people that the forest is our pharmacy and our grocery store – everything we need we can get out of the forest,” says Johnson. “We need to look at the forest as the ultimate resource. There are many things in it that can make our lives happier and healthier. We also have a great responsibility to take care of it.”

Unlike many Northern Wisconsin residents, Johnson embraces winter, naming it as one of his favorite seasons. “Winter is when you traditionally learn your stories. That’s when you’re sitting around with your family sharing culture and knowledge. That’s the real intense learning time. It’s a very special time, a very spiritual time.”

Winter is also the season for snaring rabbits, hunting deer and fishing. Ice fishing with a spear is one of Johnson’s favorite winter activities. “When that ice freezes up and we’re spearing through the ice, we dangle a wooden decoy down to try to lure one of those creatures from that level of the world up to the hole where you’re sitting. That’s a big challenge, especially when it’s thirty below zero. It’s amazing, it’s beautiful and it’s really rewarding.”

Johnson’s children are also carrying on the hunter-gatherer traditions, with his son Koen the fisherman in the family, and his daughter, Nodae, who just turned nine, a very capable deer hunter who butchers, dresses and skins deer on her own. As for his newborn son Blaise, his specialty still awaits revelation.

And, of course, interest in foraging has been on the rise. A slew of trend pieces and flashy cookbooks are evidence of that. But there are a few who have lived the foraging life before it went mainstream who want to provide a framework for new converts.

For Sam Thayer, author of “The Forager’s Harvest” and “Nature’s Garden,” eating wild foods is a way of life. Sam – who lives outside of Ladysmith, Wisconsin, on 40 acres with his wife Melissa and children Myrica and Joshua – feeds his family on a diet that consists of about 40 percent wild foods.

Contrary to most people’s assumptions, summer is not the optimal time to eat a wild-food diet. “The wild foods that are available at the height of summer are primarily wild leafy greens and berries. There’s only so much of your diet that can consist of those foods,” Thayer explains.

By contrast, winter is the time when Thayer’s family can enjoy the fruits of their summer and fall foraging labor. “I feel like in the winter we’re just as busy foraging as we are in the summer because we also have all of these stored foods that we then process.”

Thayer’s winter diet consists of foods like nannyberry, cranberries, hazelnuts, wild plums, apples, wild rice, fish and game. This year, he put up 17 gallons of blueberry juice and 30 pounds of blueberry fruit leather. He also makes milk out of the truckloads of hazelnuts he’s foraged. And unlike most nut milks you’ll find at the grocery store, Thayer’s hazelnut milk isn’t overly watered down and it’s made with a touch of maple syrup and cinnamon. “It’s to die for,” he says. “It’s the closest thing you can get in the wild to ice cream.”

But What About the Normals?

While Kristan Martin, Biskakone Greg Johnson and Sam Thayer are certainly exceptions to the normal Wisconsin – and American – diet, all three noted that there has been consistent, gaining interest in the general public in wild, hunted and organic homegrown foods. Martin sees this interest in the form of neighbors who barter fish or honey for her homegrown produce. Johnson notes it in the teenage boys who ask for his help to hunt and process deer for their grandmothers. And Thayer observes it in the number of people who buy his books and ask for advice on foraging. In fact, he says there’s been more interest in foraging in the past five years than in the past 25.

Still, all three agree that processing the bulk of one’s own food isn’t possible for many ”“ even the majority ”“ of people. But there are simple things that anyone can do to cut costs and eat healthy and locally at the same time. Heirloom tomatoes, fields of partridge, lakes full of wild rice and hedgerows of hazelnuts are under-utilized and healthy sources of food. In this area, especially given its rates of food insecurity and poverty, it only makes sense that more people avail themselves of such resources, and take advantage of those in their region who are working to make healthy, local foods available to everyone.

Similar to banana bread, but with a slight prune flavor and a rich, dark color.

Make nannyberry puree by cooking about a gallon of berries with a quart of water on low heat, then running through a fruit strainer or Foley mill.

Combine dry ingredients (except nuts) and mix, set aside.

Combine wet ingredients separately, then add to dry and mix just until moist. Then add nuts. Scrape into an oiled 8″ x 4″ loaf pan, bake at 375 about 45 minutes (check with a toothpick toward the end to make sure it’s done).