When California Changes Its Chicken Laws, It Affects Everybody

California adopted more humane laws for laying hens. Your state may be next. 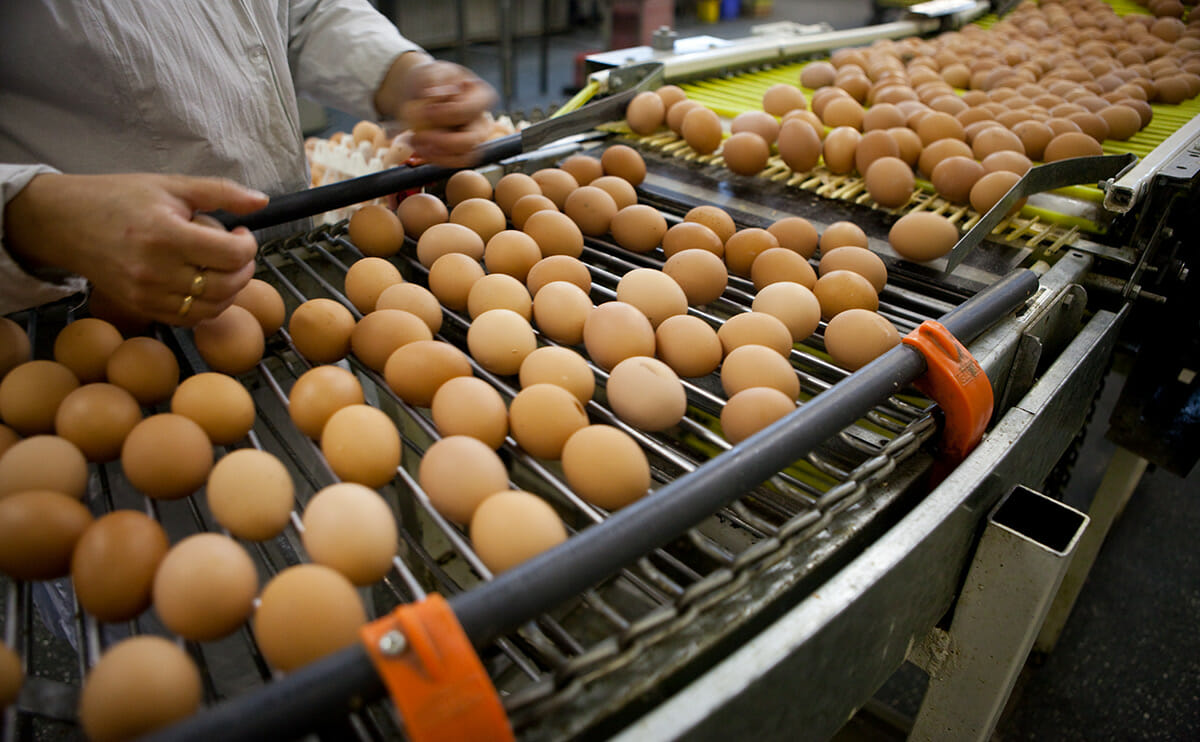 The Humane Society is winning the argument in California ”“ a battlefield that matters more than most. As one of the world’s largest economies, the Golden State is a big market for eggs, and, well, just about everything else. Because of that, California’s laws can have a significant impact on the practices of industries outside its borders that want access to the consumers within them. In 2012, Monsanto and DuPont spent millions to help defeat a California ballot measure requiring labeling of genetically modified foods. Tom Philpott, a Mother Jones food writer speculated that the measure, if successful, “likely would have inspired the processed-food industry to label food everywhere.”

Conventional eggs typically come from economically efficient farms that pack thousands upon thousands of birds into each henhouse. “Battery cages” afford each hen 67 square inches of space, less than a standard sheet of paper. They can stick their necks out of the cage to peck at grain and corn, and lay eggs, of course, but have little room to do anything else chickens like to do: perch, scratch at the ground, flap their wings.

In 2008, believing such claustrophobic cages were inexcusably cruel, the Humane Society backed a ballot measure in California that would require egg producers to provide chickens with enough room to stand up, turn around and stretch their wings. California isn’t the country’s biggest egg-producing state ”“ there are around 15 million egg-layers in the state to Iowa’s 53 million ”“ but it’s a significant player. And, Peter Brandt, senior attorney for farm animals with the Humane Society, says the state’s politics gave the measure good odds of passage. On the other hand, he says, “Iowa is more likely to make it a crime to take a picture at an industrial farm.”

Their calculus proved right: California voters passed the Humane Society’s measure 63.5 percent to 36.5 percent. Two years later, the legislature recognized that the law would put California egg farmers out of business, forcing them to spend lots of cash to upgrade their facilities while competing with out-of-state producers that weren’t subject to the regulation (and the attendant investments and price increases it would entail). So the law was expanded to cover all eggs sold in the state.

Egg producers outside of California chafed at the expansion, arguing California couldn’t tell farmers in other states how to go about their business. But a federal judge disagreed, so as of January 1, 2015, anyone who wants to sell eggs in California will have to comply with the new rules. Many California egg producers are switching to cages that will give each bird 116 square inches of real estate. One farmer told Civil Eats the change would force him to raise his prices by 10 to 15 cents a dozen ”“ an increase, but not a catastrophic one.

California has long been to environmental law what New York is to fashion: It leads, others follow.

Some out-of-state producers are racing to makeover their henhouses, says Ken Klippen, a lobbyist for the National Association of Egg Farmers, but others can’t afford to make the switch. Klippen is skeptical that enough henhouses will be converted in time to satisfy demand. “They need to import eggs from 20 million chickens each day to feed California,” he explains. If there’s room for fewer than that in compliant henhouses when the law takes effect, that could create an egg shortage in California, driving prices up. Other markets, however, would then become oversaturated, suppressing prices. If that happens, Klippen says, “It’s going to leave (farmers) in a world of hurt.”

But assuming enough farmers do beat the clock, and the “economic tsunami” Klippen fears doesn’t come to pass, the animal rights camp will have a significant victory to celebrate. Reacting to the recent court victory, Humane Society president Wayne Pacelle wrote that he hopes California’s new law “is a big factor in ushering in a new, better, safer era in farm animal protection in our nation.”

It’s a lofty goal, but not necessarily an unrealistic one. California has long been to environmental law what New York is to fashion: It leads, others follow. The state’s groundbreaking clean car standards, for instance, paved the way for national rules requiring cars and light trucks to get 54.5 miles-per-gallon by 2025 — one of the most significant things the federal government has done to address our climate problem.

Now, the state may be carving out a similar position in animal rights law. It implemented the first statewide ban on foie gras in the U.S., which is produced by force-feeding ducks and geese to fatten their livers. (Legal challenges to the foie gras ban have failed.) And since the egg law passed, new standards for hens have been approved by voters or legislatures in Oregon, Washington, Michigan and Ohio. (A joint effort by the Humane Society and one industry group to get a national egg law included in the recent Farm Bill, however, failed and is no longer being pursued.)

As Richard Frank, director of the California Environmental Law and Policy Center at the University of California-Davis, puts it: “Laws that begin in California often don’t end in California.”