The flesh and skin of these chickens is completely black. 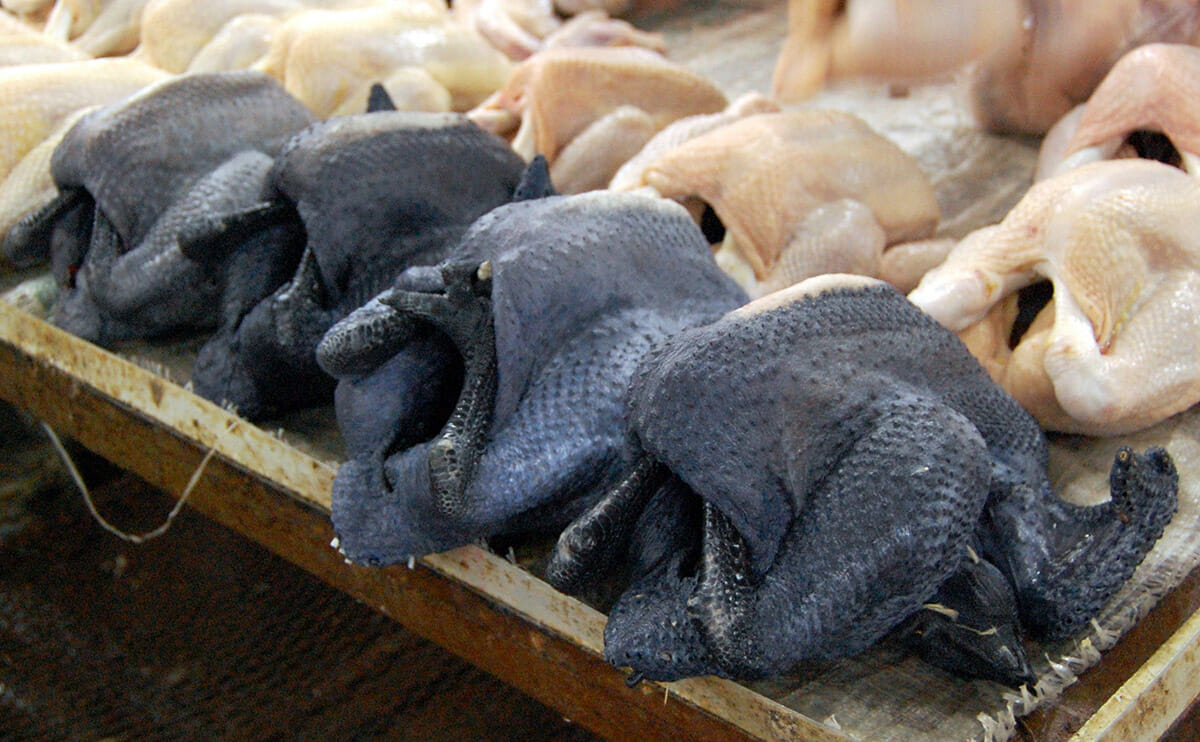 Silkies owe their unusual black color to fibromelanosis, a rare genetic mutation of hyperpigmentation believed to have first arisen in China. Their Mandarin name, wu gu ji, means “dark-boned chicken;” the name silkie comes from their fluffy plumage which, lacking barbicels, looks and feels like fur. Silkies have five toes, one more than other chicken breeds.

“Silkies look like creatures straight out of Dr. Seuss,” says Lissa Lucas of mypetchicken.com, a web store and information clearinghouse that sells chicks and accessories to backyard chicken farmers. In addition to their ornamental good looks that class up the chicken coop, Lucas says that silkies are popular because they’re friendly and docile. “You want your pets to be affectionate, and silkies are basically love incarnate.”

Lynn Heald, a retired pediatric nurse practitioner who has kept silkies and other chickens in her backyard in Oak Park, Illinois, for the past five years, said that she and her 12-year-old sought out the breed because of its reputation as a “lap chicken.” Having become charmed by them, Heald’s neighbor is now raising silkies of her own.

“Silkie hens are fantastic mothers,” says Rosemary Glos, a student at New Roots Charter High School in Ithaca, New York, who has been raising silkies at her family’s Kingbird Farm since she was 4 years old. “My silkie ‘mamas’ will often co-mother and work in a group to raise 20 or more chicks.”

Lucas concurs. “When families want to hatch their own eggs at home under a hen, a Silkie is one of the top choices. Silkies typically make awesome mother hens, and are great brooders.” With maternal instincts that extend even beyond species lines, silkies will hatch eggs laid by ducks, turkeys and pheasants; because of this tendency toward broodiness, silkies are not themselves prolific layers, producing fewer and smaller eggs than the average chicken.

‘Silkies look like creatures straight out of Dr. Seuss.’

“Silkies would probably not be viable for someone who needed high egg production, but I’m content with the eggs, because they’re so good,” says Glos, adding that her current flock of two dozen silkies will provide 1 to 3 dozen eggs per week, depending on the season. Heald reports a yield of about 3 small eggs per week per bird, “which is fine for our daily use,” but blanches slightly at the mention of slaughtering her silkies for their meat. “I wish I could, but I can’t,” she says. “I’ll give them to a friend, who will eat them when the time comes.”

Though sentimentality certainly prevents some silkie breeders, who may consider them pets and call them by name, from slaughtering the birds for meat, the other reason is practical.

“Traditional farm breeds may take six months or more to reach full size, and will have run around being chickens for that long,” says Lucas, who adds that “Commercial meat chickens are tender because they’re young and have little space to exercise those muscles. To raise silkies for meat, it would cost way more in feed and time to produce a smaller, tougher bird.”

There are exceptions, of course. Glos raises her silkies primarily to sell the eggs and the chicks, but will raise up any remaining cockerels after the summer season and typically butchers up to 10 at a time to sell at her local farmer’s market. “My customers usually make them into a soup, because they’re so small and bony,” says Glos. Those who follow the dictates of Chinese medicine believe that a silkie soup, augmented with ginger, goji berries and red dates will increase female fertility, nourish a developing human fetus and restore the vitality of a woman who has recently given birth. It’s a nice connection to the animal’s own maternal nature, and as my husband’s aunt Gail Monesson, who raises chickens (though not silkies) in Albuquerque, New Mexico, said, “Finally! Something not aimed at giving men a bigger erection.”

I bought a head-on, feet-on silkie at my local Chinese supermarket and made the following soup for my five year old son Max, who had been ill enough to come home from school. His energy was so restored after eating it for lunch that I was tempted to send him back.

Silkies have relatively little body fat, compared to commercial “meat chickens,” as you’ll see if you refrigerate the broth overnight, so skimming for fat is not necessary as the stock simmers.

1. Place the chicken in a large pot and cover with cold water. Bring the water to a boil, reduce to a high simmer, and cook for about five minutes, skimming and discarding any scum that rises to the surface. Remove the chicken to a cutting board and discard the hot water. Wash and dry the pot or retrieve a clean pot of roughly the same size.
2. Place the chicken in the clean pot. Add the wine, vinegar, soy sauce, onions, ginger, garlic peppercorns, star anise and water to cover. Bring the mixture to a boil, then reduce to a low simmer. Let simmer for about 4 hours. Taste the broth and adjust seasoning as desired.
3. Drain the broth into a large clean bowl, then return it to the soup pot. Discard the ginger, garlic cloves, peppercorns and star anise. Transfer the chicken to a cutting board and, once it is cool enough to handle, remove and discard the skin and bones. Return the meat to the broth and keep it at a low simmer.
4. Bring a separate pot of water to a boil. Cook the noodles in the boiling water for about 30 seconds. Drain the noodles and divide them evenly among serving bowls. Add some simmering broth to each bowl and serve. Serves 4 to 6.