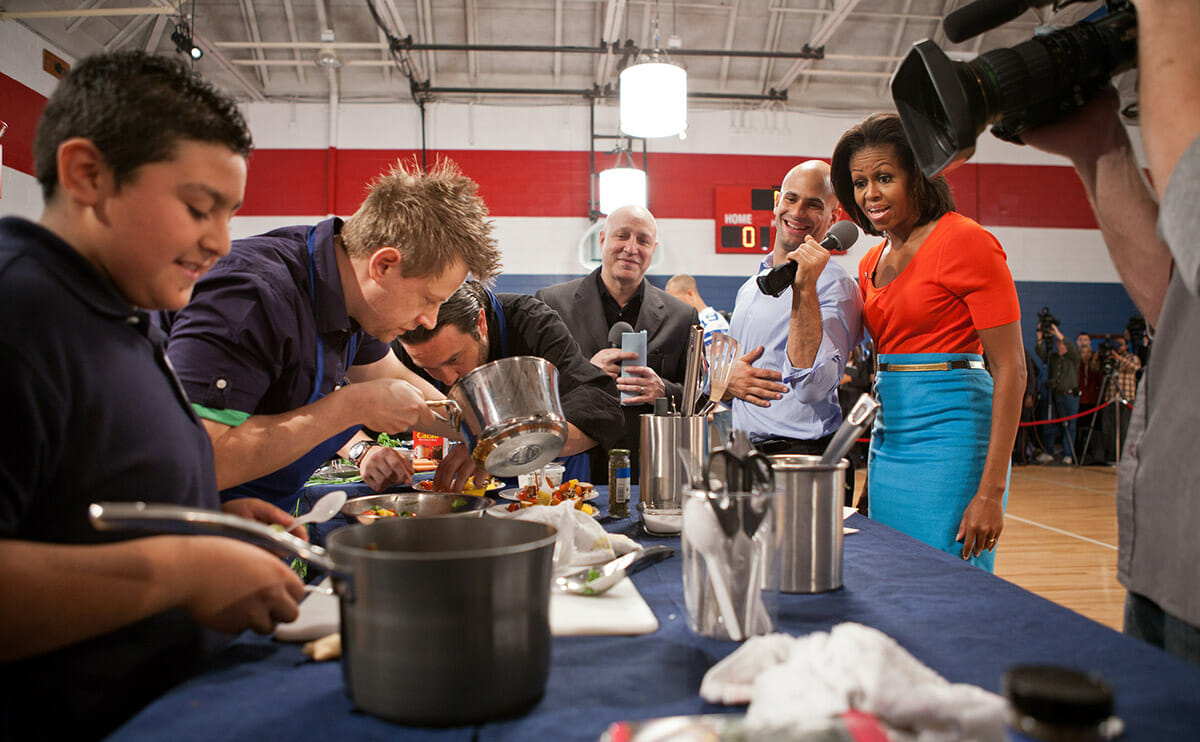 Sam Kass holds a microphone for Michelle Obama at an event celebrating the second anniversary of "Let's Move." Here, chefs from past seasons of "Top Chef" and students take part in a cooking competition. / Courtesy the White House.
Share
Tweet
Pin
Email

Kass, a Chicagoland native, began cooking for the Obamas when Barack was an Illinois senator, later becoming the family’s White House chef. Of course he’s also Executive Director of Michelle Obama’s Let’s Move campaign and White House Senior Policy Advisor for Nutrition. And did we mention he teaches youngsters about healthy eating, he recently got married and has even been seen out golfing with his boss? Somehow Kass managed to carve a little time from his overbooked schedule to give Modern Farmer a call from the Office of the First Lady.

Modern Farmer: What’s been your greatest accomplishment working with the Obama administration?
Sam Kass: With the First Lady’s leadership, we’ve been able to pass legislation that has completely overhauled nutrition programs in our schools. We’ve really worked to elevate consciousness in the country around food and its importance, and the [White House] garden was certainly monumental for that. We’ve worked with businesses to help leverage their resources to help make it easier for families to make better choices.

MF: We hear you talking about lots of different projects and issues. What, in your opinion, is the biggest problem with food policy as it stands now?
SK: I think we often try to find that ‘magic bullet,’ that one thing where if we could change that, then everything would be solved. And actually, when it comes to what we eat, it’s a multi-faceted and very complex set of factors that lead to us making choices. It doesn’t take big, transformative, revolutionary things to make real change. I think that food is ultimately one of the deepest expressions of our culture ”“ of who we are. We need to be thinking about all this as a real cultural shift that’s underway. Policy is an important part of the challenge of how we feed ourselves, but these problems cannot be solved by policy alone.

MF: How do you think that public attitudes towards nutrition have changed since Obama took office?
SK: The issue of our health has risen on the scale of what parents are concerned about ”“ it’s now a part of mainstream discourse. Water is now, once again, the number one consumed beverage [in the nation], when before it was sugary drinks ”“ that’s a big deal! We’re seeing whole grain consumption go up, and we’re seeing fruit and vegetable consumption go up. We’re making some progress! We’re starting to see obesity rates decline in our youngest kids; you see gardens popping up all over the country, you see farmer’s markets continuing to dramatically increase. Small farmers are up over the last number of years for the first time in decades, so the shift is underway.

MF: What’s the hardest part about your job?
SK: One of the challenges is balancing all of these complex issues, and making sure that there are not unintended consequences from any of our actions. In the end, all that the First Lady cares about is that we help families live healthier lives. She wants real, substantive results, not just nice press releases. That means working with a very diverse set of actors, and that’s always a complicated piece of business.

‘When you work here, you have to get it right. There’s no room for error.’

MF: How, practically speaking, do you go about enacting change and implementing these policies, making sure that they actually happen? Are there certain governmental departments who you work with a lot?
SK: The two agencies we work most closely with are the USDA (United States Department of Agriculture) and the HHS (Department of Health and Human Services); it depends upon the approach. And then we’re working with a broad range of stakeholders to make sure schools have the support that they need to really implement these [policies]. There’s obviously a lot of push back around some of the school nutrition work, but we’re committed to seeing it through. When you work here, you have to get it right. There’s no room for error.

MF: I’d like to ask you about GMOs ”“ do you think they are necessary to feed the planet, and why do you think they provoke such controversy?
SK: I think people are increasingly passionate about their food, and where it comes from and how it’s grown. The debate is healthy, though we’re facing quite a challenging time. I think everybody needs to work towards an approach that is not reductionist in order to figure out how we’re going to sustainably feed the planet. So there’s no simple answer to that.

MF: How would you describe your style of cooking?
SK: I focus my cooking on the season and the weather; I try to cook simple, delicious and healthy meals that are balanced. We get to cook out of the garden every night, which is awesome, so I let the garden drive the choices that I make. So when it’s tomato season, we’re eating a ton of tomatoes; we’re about to pull up a bunch of sweet potatoes and for the first time we’re going to harvest a bunch of peanuts, too. I’m super psyched about the peanuts! We had some great corn, and our fig tree went crazy this year. We’re finishing up on the beans and the peppers. So it’s been an incredible growing season. I think my approach has been deeply impacted and shaped by working closely with farmers ”“ just listening to them ”“ and then my job is to not mess it up.