Meat collectives are gaining ground as a way to bring consumers closer to the sources of their food. 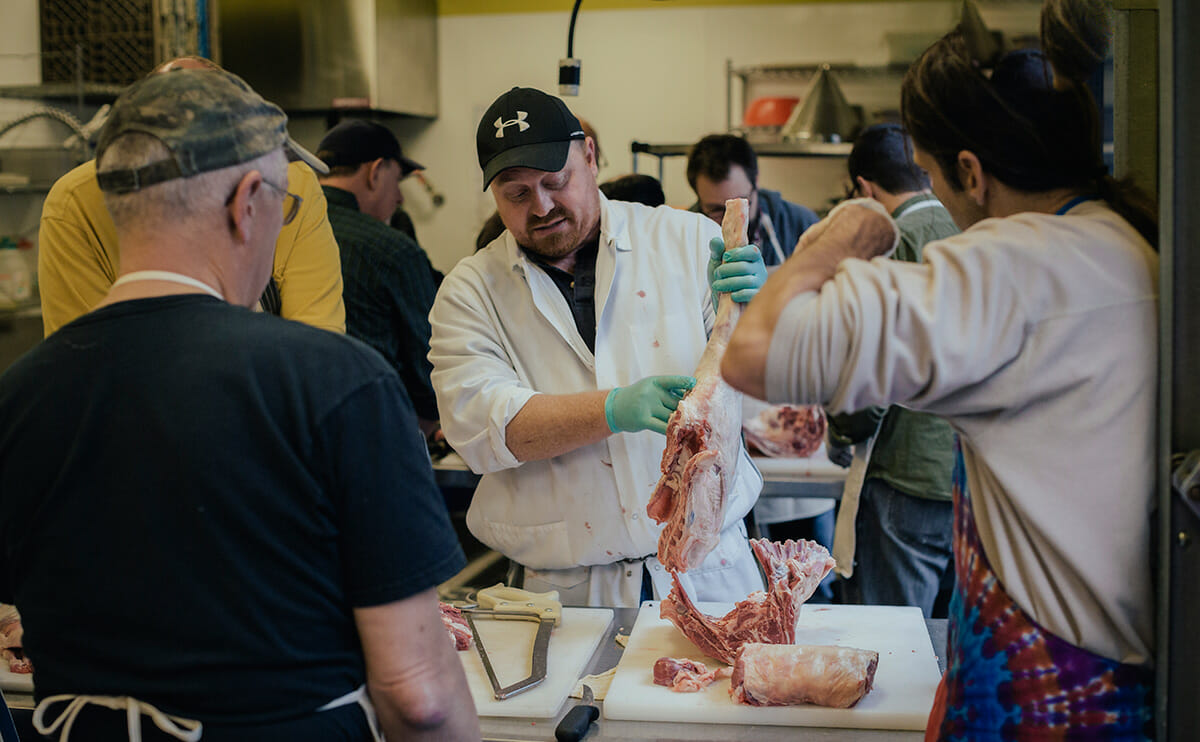 Welcome to the meat collective.

Meat collectives are a relatively new phenomenon, popping up mainly along the West Coast. The primary purpose is economic and educational, first making the connection between local livestock/poultry farmers and consumers interested in bulk purchases of meat. The next step is teaching consumers to wield hand knives and meat cleavers and learn to butcher whole or half animals into all their usable cuts and parts — including bones.

Last year, using a Kickstarter grant, Camas Davis started the Meat Collective Alliance, which today has six collectives in Oregon, Washington, California, Montana and, by the time you read this, perhaps Florida. Each one is somewhat different and instructive. Here’s how:

Camas Davis didn’t start out to be the Mother of Meat Collectives. It just worked out that way. Five years ago, the Oregon-based food writer and editor lost her job and decided to re-focus and re-tool. Why not learn a practical skill like butchering? After having difficulty getting training in the U.S., Davis went to southwest France to learn meat-cutting from the Chapolard family (well-known in food circles). She then returned to Portland with the idea for the Portland Meat Collective.

“I also gathered 100 to 150 contacts from people interested in starting or being part of a meat collective,” Davis says. She decided to spread the word by forming the non-profit Meat Collective Alliance and publishing an extensive start-up guidebook.

While traveling in Italy, Jon Gonzalez became enamored with Slow Food. After he heard about the Portland collective, he helped start one in El Dorado, California (near Sacramento) in 2013.

Like most collective leaders, Gonzalez has a day job ”“ managing commercial real estate ”“ and the collective is largely a labor of love. “We’re in a meat desert with no USDA slaughterhouses nearby,” Gonzalez says. “I now have to drive two-and-a-half hours to get quality lamb.” His monthly classes now sell out, he is taking a student group to Italy this fall and he is looking for a permanent teaching kitchen and a refrigerated truck.

“My story is similar to Camas,’” Gonzalez says, “except I didn’t lose my job.”

“All the pieces are lining up,” says Mark Trout of the nascent Los Angeles Meat Collective. “We hope to start selling seats to classes by November.” With 17 million people in a three-county area to draw from, Trout is optimistic. “The USDA and the county people have been great,” he says. “I keep saying, ‘Tell me if there’s anything I need to do before I start up!’”

A computer company employee (surprisingly, he still doesn’t have his website up), Trout was attracted to the meat collective movement because he loves cooking and teaching. He confesses, “I’m the kind of guy who for entertainment watches YouTube videos of guys breaking down sides of beef.”

Joel Hansen is business manager for a holistic nutrition school, so when he and two partners founded the Olympia Meat Collective in Washington state, it’s not surprising one of the collective’s goals was to “change the way people eat ”“ better meat if less of it.” Butchering classes are doing well ”“ over 60 students so far ”“ and Hansen says one of the collective’s missions is to connect farmers with consumers. “It’s much easier if farmers can sell a whole or half animal rather than just cuts,” says Hansen, who also raises poultry and goats on the side.

Hanson also thinks we should eat the way the ancients did: “We only eat muscles of animals. They consumed the whole thing, including the bones, fat and internal organs, the most nourishing parts.”

Alan Michaud was a plumbing supplies salesman when he decided at age 50 to leave Helena, Montana, and go to culinary school in Alaska. His grandfather was a chef, and Michaud liked cooking and making charcuterie. Without funds to start his own restaurant, he became excited when he heard about the Meat Collective Alliance.

“I’ll be setting up a website soon,” Michaud says. “I’m talking to ranchers and butchers who want to work with me. And I’ve been working with state officials. People have been interested and respective, but there’s so much I have to learn.”

“A meat class might have 10 or 11 students,” says Sarah Wong, a professional chef and cooking teacher who is one of three founders of the Seattle Meat Collective (website still in formation), “and an intern and I might start with a whole hog and break down half of it. Then it’s the students’ turn.” For their tuition, they learn meat-cutting and get to take home the remains of their lessons.

Wong, who also interned with the Chapolards, is working with collective students on how butchering differs from country to country, with visiting instructors from France, Italy and Austria.

The interest in hands-on meat-sourcing through collectives, Wong believes, “is a revival that is here to stay. People want to regain control over what they eat.”