Looking for an alternative ’jack of all trades' barnyard animal? Consider the guinea. 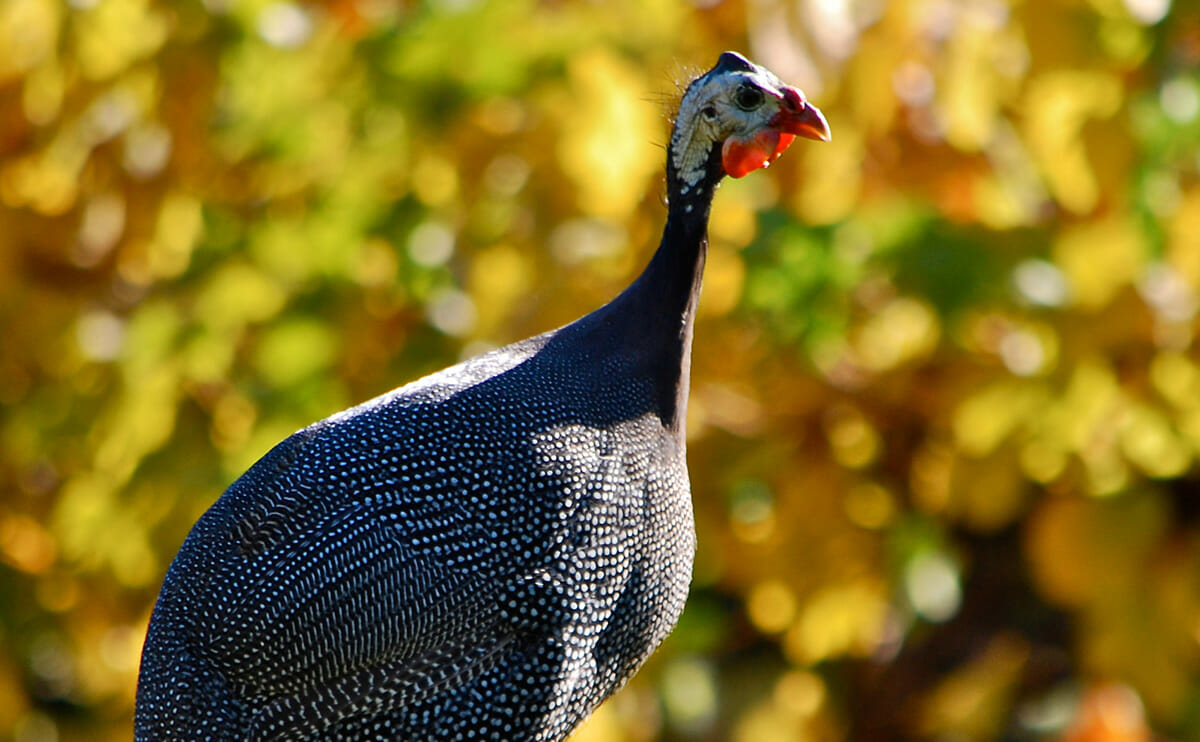 Baby guineas, called keets, are about as adorable as they sound and easy to tend. But once they grow older they are worthy watchdogs, fighting off trespassers both human and animal alike. 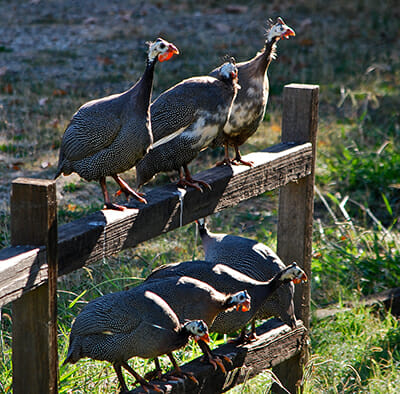 Bruce King, who sells live guineas at Ebey Farms in Everett, Washington, provides an annotated list of reasons why guinea fowl make such good farm animals: their tastiness, their relatively low-maintenance lifestyles, their vigilance at keeping away predators. Guinea fowl make an interesting and colorful addition to your flock and are very useful on the farm to alert and protect other animals from predators, he says. But recently, he has seen an increase in what he calls “revenge sales.”

King said urbanites buy the noisiest, screechiest birds from him to satisfy vengeance against their complaining neighbors.

In addition to providing home-security help, guinea fowl are valued as one of the best exterminators of pest insects, making them a complement to any backyard garden. Since guineas prefer to mobilize in tight-knit groups, don’t be alarmed when they don’t understand the nuances of property lines and roadways.

They free-range and will naturally roost in trees if left without a shelter to sleep in. They are also tick-eating machines.

Guinea Fowl International President Cindy Gibson notes that using them to control ticks and other bugs is their truest claim to fame. Further evidence of guineas as pest control comes from her Lexington, Texas, farm which was once overrun by grasshoppers. After using “every pesticide known to man,” Gibson added some guinea fowl to her mix of llamas, donkeys and pigs and found the grasshopper problem was miraculously solved. “I’ve been a fan ever since.”

Guinea fowl are valued as one of the best exterminators of pest insects, making them a complement to a backyard garden.

Guinea fowl have long been considered a prized game bird, right up there with pheasants and quail. Understandably, the Egyptians considered the guinea fowl a luxury food for the wealthy. Guineas are gaining in popularity in the U.S., outselling their pheasant and quail friends. You may have seen them at the farmers market: their meat is darker than chicken, leaner than chicken, rich with vitamins and low in cholesterol. Aaron Rocchino of the Oakland, California-based The Local Butcher’s Shop says that their guinea hens come in year-round every few weeks and that they always sell out.

The USDA believes that guinea-fowl farming is on the rise and has recently started compiling inventory statistics. The numbers support that claim: There are more than 14,500 guinea farms in the U.S., fourth in fowl after chicken, turkeys and ducks. The numbers of actual guineas being sold is paltry (paltry poultry!), but still indicates that there is a growing interest in raising guineas on hobby and small farms.

Dozens of enthusiasts joined Gibson at the recent Guinea Fowl International Conference in Kent, Ohio, held in September. Part of the mission of the nine-year-old group is to distribute and promote guineas at poultry shows and to educate USDA extension agents. They have seen a steady membership increase of guinea fowl farmers, both commercial hatcheries and backyard hobbyists that use them to complement their gardens and farms. The latter are concerned with how to care for their farm animals without using pesticides or other chemicals.

“It’s a natural fallout that people who have guineas are thinking about sustainable farming,” noted Carolyn McDermott of Star, North Carolina.

Meanwhile, there seems to be a steady increase in the number of young farmers who have adopted guineas into their flock.

“People laugh when they first visit,” says Cara Sammons who, along with her family and her husband Devin Shepard, started Flying Goat Farm, an 11-acre goat and cheese farm in Acton, Maine. When they first moved into their farm, chickens and guineas came first, followed soon after by their namesake goats. They often use their guineas as watchdogs for their herd. Sammons laughs about the way they alert if a fox or other predator comes by, or if they notice anything unusual, adding that they didn’t like the lawnmower moved around the farm.

“They sound like a machine gun going off when there is a fox in the yard,” Sammons says.

5 Reasons to have Guineas

Guineas do a great job at guarding your property, sounding a halting alarm when something unfamiliar approaches. Hawk, hawk, hawk!

Unlike chickens, who produce eggs throughout the year, guineas typically lay large a couple of times a year. Don’t let their tiny size get you down (two guinea eggs equals one large chicken egg) The flavor is more delicate. Guinea meat is darker and richer than chicken, with less fat and lower cholesterol, and considered a delicacy in Europe and some trendy American restaurants.

These low-maintenance birds helpfully protect other farm animals and are free from poultry diseases that are troublesome to most farmers. Their nutrient-rich manure can be composted and used in the garden.

Working as a team, guineas will eat any pest they can get their beaks on, but unlike chickens, do so without tearing and scratching up your garden. Since they free-range, they will hunt ticks (or beetles, fleas, grasshoppers, crickets, snakes) all over your property. They are a more natural option to control the insect pest population than pesticides.

What great personalities! What beautiful plumage! What strange looking feathers! You can see them in colors ranging from pearl grey to lavender, royal purple and blue. They’re very curious and fun to watch.

Why doesn’t the United States government utilize these to stop the tick epedemic?

How do you keep the Guinea hens in your yard? We are looking for natural tick and flea control on about 2 acres, but want to keep them on our property,Is that possible? Asking from NJ

Considering getting for tick control for large yard and adjacent naturalized hillside. Have large veggies garden. Intention is to raise 1/2 dozen birds, keep through tick season , then butcher for the freezer.

I want one. I had four chickens, 1 hawk reduced my flock by 50%. Last night I caught a possum trying to get into the cage and there were two rats as well! Calling in the Calvary!

Alan, they are not native toy he USA.

How would they do in a NH winter?