Mutant Fruit Flies to the Rescue

Two modified genes in these lab-produced male flies will induce them to kill themselves off via mating. 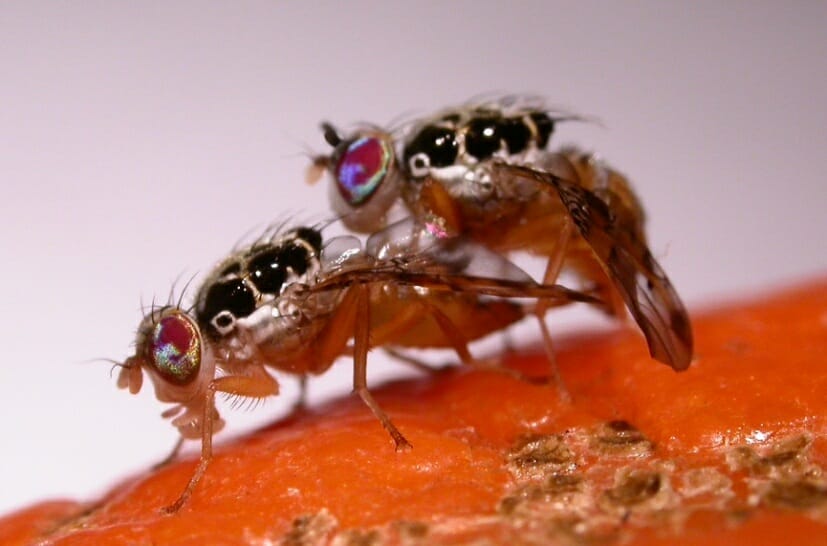 For the first few weeks, the team grew a healthy population of Mediterranean fruit flies inside the cages and monitored how they mated and laid eggs.

Starting in the eighth week, scientists designated two cages and began releasing lab-engineered, genetically altered male flies into them once a week. The other two cages were left untouched. The new males were different from their wild counterparts in only two genes, but within two months, the cage populations differed drastically. In the untreated cages, the pests prospered. In the experimental cages, their population collapsed. The end result was a romantic tragedy of tiny proportions: All the survivor flies were males that had nobody to mate with. All the females had died.

Oxitec, the British bioengineering company that set up the experiment in collaboration with the University of Crete, expected this to happen. The company is working to create a whole line of self-destructing pests that they hope will protect humans from disease and crops from destruction.

The fruit fly, whose scientific name is Ceratitis capitata, is a much-hated pest that damages nearly 300 types of fruits, vegetables and nuts. As females deposit eggs into the fruit, they puncture a hole in its skin, letting in bacteria and yeast. When the eggs hatch into larvae, the maggots feed on the fruit, further destroying it. When the fruit drops to the ground, grown larvae burrow into the soil where they pupate, emerging as adult flies, ready to mate again – all within a month. Originally from Sub-Saharan Africa, the fly has spread all over the world, and is now found in Australia, South America and the U.S.

To control the fruit-fly population, farmers use inefficient scented traps, insecticides that kill off other species and release sterilized male flies to mate with wild females, rendering no offspring. The latter is not very effective: to make males sterile, they’re irradiated, which ruins their mating performance. They don’t compete well against tough and healthy wild rivals.

Oxitec took the bioengineering route. Their lab-produced male flies contain two modified genes that diabolically induce the flies to kill themselves off via mating. One is a marker, used to track flies that carry it in all future generations, including those that breed in the wild. When a special light is shined on marked bugs, parts of their bodies glow red. The other gene is a “self-limiting” or “lethality” gene that affects females only. Lady flies that carry it don’t live long enough to mate and lay eggs — they die in larval stage. But the males grow up to be healthy adults. When they mate with wild femme flies, the only progeny that survives into adulthood are males who, in the absence of mates, can father no brood.

“This genetic system influences only the females so you are left with only a male population,” says Martha Koukidou, a molecular biologist who leads the project. “In all experiments we’ve done this system works 100 percent.”

Oxitec isn’t stopping with fruit flies. The company also tested a similar technique in Brazil on mosquitoes that transmit Dengue fever and is waiting for regulatory approval to use the insects in the Florida Keys, where the sickness has recently reared its head. “Our technology would work on any insect,” says Simon Warmer, Oxitec’s chief scientific officer.

The approach is not without controversy. The idea of letting genetically modified death-carrying creatures into the world sounds alarming to many — some Florida residents are vehemently opposed to the method. But Oxitec is working with a gamut of regulatory agencies to ensure safety, including Environmental Protection Agency and the Center for Disease Control, among others, says Derric Nimmo, the company’s product development manager.

Some argue that the bioengineering approach may be more environmentally friendly than toxic insecticides that wipe out beneficial insects and birds and leak into rivers, killing fish.

The idea of letting genetically modified death-carrying creatures into the world sounds alarming to many.

“Insecticides don’t target just the pests, they target everything in the ecosystem,” Koukidou points out. Neither would their method render Medflies extinct entirely, she says. “Flies move at the most 20-25 meters [roughly 60-80 feet],” she explains. “Even with no flies left in a treated orchard, miles away they will continue living and procreating.”

The next step is taking the method out of the greenhouse and into an open field with natural conditions. Oxitec recently received approval for open field tests in Brazil.

Once the insects are approved, Oxitec plans to set up factories in which flies would multiply, like, well, flies. In Brazil, Oxitec has already built a mosquito-producing facility.

“It’s a lot of trays and racks,” Nimmo says. The insects would grow the same way they do in Mother Nature, except they will carry the killer gene.

Once the fly conveyor’s on, Koukidou envisions farmers ordering the pupae and releasing them as soon as they become flies. “Most likely they would get pupae in a box,” she says, but the exact method still needs to be tested. “That’s what we want to investigate in the field release.”

Popular
7 Smokable Plants You Can Grow That Aren’t MarijuanaBrian Barth
Vegetables Aren’t Always VeganEmily Baron Cadloff
A Once-Forbidden Fruit Makes a ResurgenceShelby Vittek
OSHA fines Poultry Companies $1 Million after Deaths of Six WorkersDan Nosowitz
10 Summer Squash Varieties: Some You Know, Some You Don’tDan Nosowitz
Explore Modern Farmer
Related
Food & Drink, Plants
Show Us Your Share Part 2Modern Farmer
Animals
Move Over Goats. Cattle are the New Fire Fighters in TownLindsay Campbell
Animals
Koch Foods, Pilgrim’s Pride Executives Indicted in Chicken Price-Fixing CaseDan Nosowitz
Plants
Bayer to Stop Residential Sales of Glyphosate-Based Roundup by 2023Alex Robinson
wpDiscuz
We use cookies on our website to give you the most relevant experience by remembering your preferences and repeat visits. By clicking “Accept”, you consent to the use of ALL the cookies.
Cookie settings ACCEPT
Privacy & Cookies Policy