A Day in the Life of a Bee Wrangler - Modern Farmer
Animals, Plants

A Day in the Life of a Bee Wrangler

Jennifer Scott, aka the Bee Wrangler, relocates inconveniently placed wild bee hives -- while attempting to save all the bees. 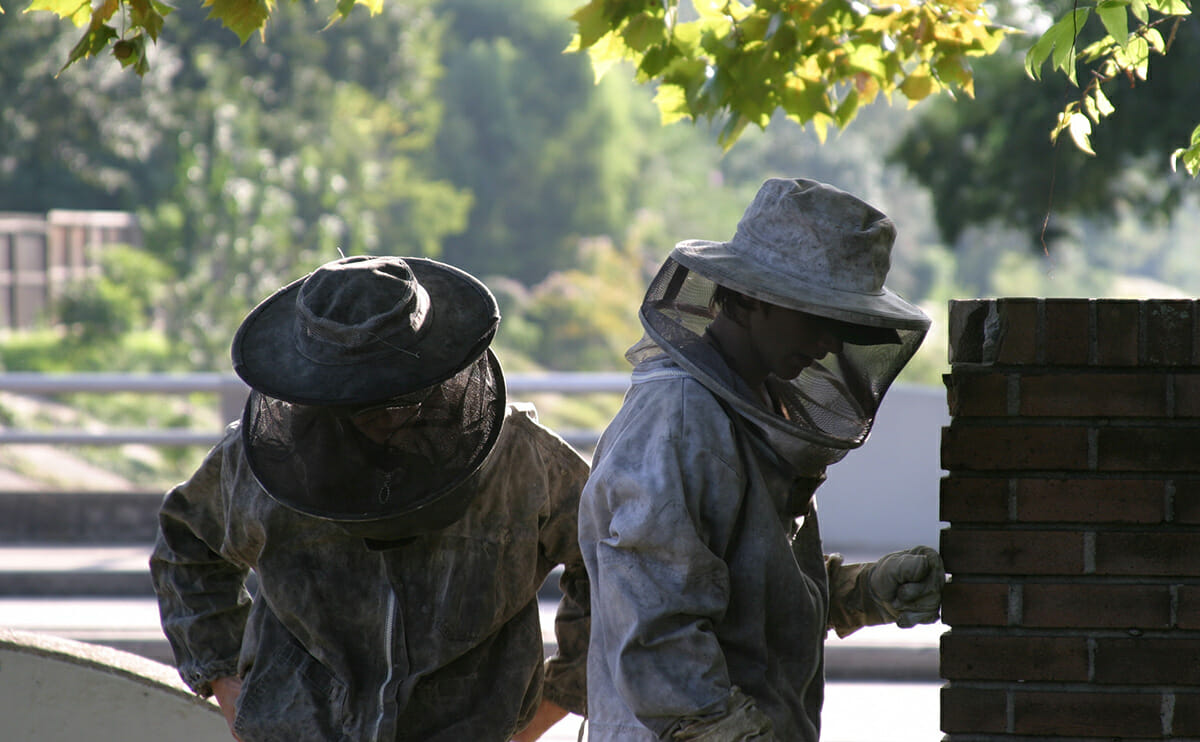 She removes unwanted bees without chemicals and relocates them to farms or to her own farm, where she has over 100 hives. There, these bees can continue to pollinate crops and produce honey. In her profession, she’s a rare gem, understanding how all bees contribute to the ecosystem in which they play such a vital role.

In 2004, Scott was living in the heart of Houston, Texas, working as a landscaper. She planted vegetables in her client’s unused gardens and started selling her harvest at a local farmers market. There, she struck up a friendship with a fellow vendor and beekeeper selling honey. She apprenticed with him for a year and in return for her hard work, she received her first hive.

However, it wasn’t until a year later that Scott’s life would send her running (literally) towards her true calling as a bee wrangler.

One summer day, Scott was mowing a client’s yard, when she accidentally triggered a nearby hive to attack her. She fled the scene, but realized she had left her mower running. After tending to her 70 bee stings, she took a swig of Benadryl and returned to the scene, to finish the job.

When a beekeeper was called to remove the bees that attacked her, Scott was saddened to watch him kill them all. She knew that she could do a better job. And she has.

I met Scott, along with her 16-year-old son, John, who works with her, early one Saturday morning. A brick column located by a busy pedestrian sidewalk, in a suburb of Houston, was teeming with bees. Concerned for the safety of passersby, the neighborhood association hired Scott to work her magic.

They unloaded their equipment from her truck, set it all up and pulled their suits on.

With the skill of a mason, she removed the bricks of the column, while John pumped smoke into the bee’s home. When bees sense the smoke, they think there is a fire and dive down into the hive, leaving the beekeeper some space to move around the hive undisturbed.

Like a well-oiled surgical team, they work together, removing bricks and then honeycomb, while gently suctioning the bees into a temporary home, a screened-in wooden box. They repeat this until they’ve collected most of the bees. Scott is able to does this without using any chemicals, while keeping the bees alive.

After tending to her 70 bee stings, she took a swig of Benadryl and returned to the scene, to finish the job.

Then she places the comb into frames and gently inserts them into the screened-in box of bees. Scott used to do this later, but realized if she did it during removal, it calmed the bees. Because the comb contains brood, or baby bees, the bees are able to resume some of their normal routine, like tending to their young, while still living in the temporary housing. When Scott first started relocating bees, she lost them all. Now, by the time she moves them into their permanent home, they adjust much better. “I have about 100% success rate!” she exclaims.

Scott uses the whole day for one rescue. She could do more, as many others do, but it is important to her that she takes the time to locate the queen. If the queen is left behind, she can make a new colony in another unwanted area, and if the colony that Scott rescues is without a queen for too long, those bees will die or leave in search of another queen. On the rare occasion that she does not capture the queen, Scott has a solution. “I’m sure to get a frame of honeycomb that has fresh eggs so the bees can modify one of those cells into a queen cell shape and produce another queen out of that egg,” explains Scott.

This diligence is why Scott is in constant demand. But, as her son takes on more of the bee wrangling business, she wants to dedicate time towards other bee-related pursuits, such as teaching beekeeping, offering a honey share program akin to the “community supported agriculture” model, and promoting apitherapy (the use of bee stings for medicinal uses) — which she believes cured her carpal tunnel syndrome.

But, for Scott, bees are more than just a business or a passion. “Bees are about something bigger,” she says. “They teach us how to be a community and how to live together.”

Oddly enough, these insects teach us how to be more human; we could all take note.