Bartender, There’s Seaweed in My Beer 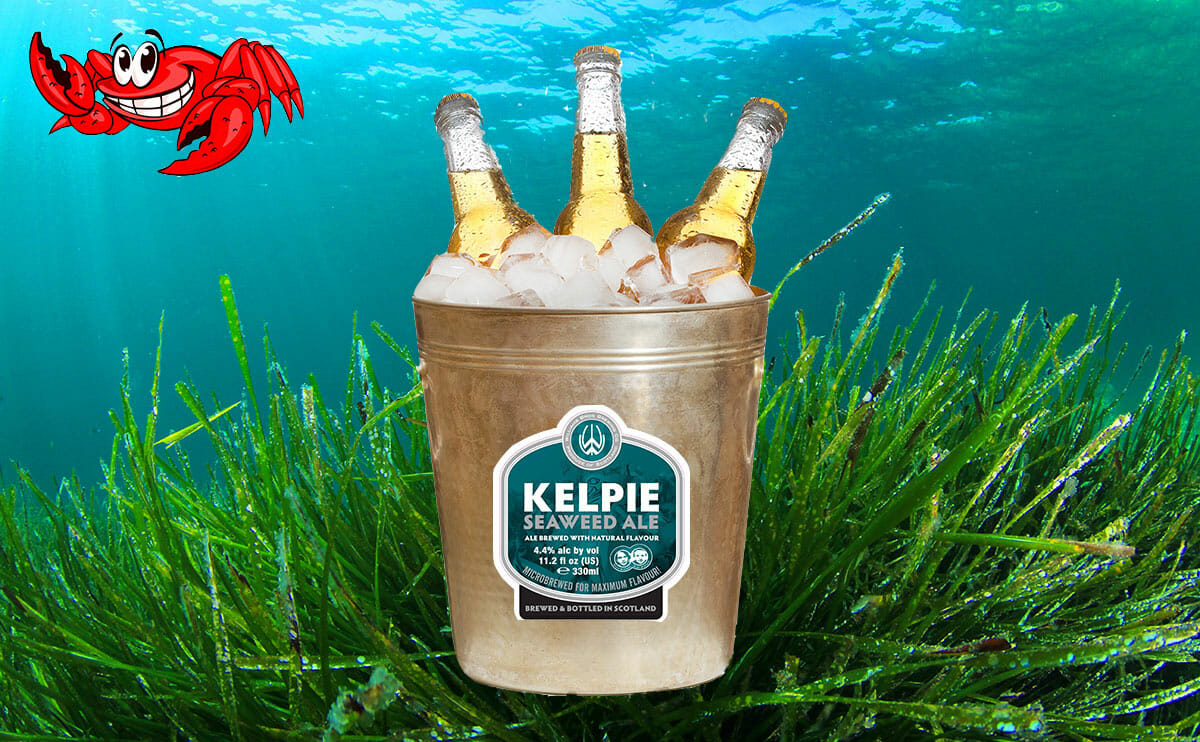 Formula for a beach night best forgotten? Au contraire: it’s a marriage made in hops heaven thanks to the reformist minds at Maine-based Marshall Wharf Brewing Co., which brewed their first seaweed-meets-malt concoction this summer.

“It’s something we’ve had on our radar for a number of years,” says David Carlson, co-owner of Marshall and its sister bar, Three Tides, both located in midcoast Belfast.

Little surprise, given that the tiny, celebrated spot has already successfully brewed with ingredients like oysters, habanero peppers and blue agave nectar. But Carlson also had a muse: Kelpie Seaweed Ale, a Scottish beer made from that country’s bladderwrack seaweed. (More than a century ago, coastal Scottish barley was grown in fields fertilized by seaweed.)

“It seemed like if they were brewing a beer with seaweed, then obviously we had that access,” says Carlson.

Maine Fresh Sea Farms, a not-quite-year-old startup, was founded by Peter Arnold, Peter Fischer, and Seth Barker, fishermen with the shared goal of creating a year-round sustainable aquaculture farm. They kicked off the venture with sugar kelp, a seasonal but hearty brown algae they grew on rope lines hanging in the waters of Damariscotta River in Bristol, Maine.

Fischer, who had been selling mussels to Carlson for the Three Tides bar menu, tipped him off to the new venture; Carlson had a simple reply: “I wanted first crack at a seaweed beer if they were interested in doing it.”

‘I wanted first crack at a seaweed beer if they were interested in doing it.

“To have David call up and say, ‘I want some for the beer!’ was so exciting,” Arnold told NPR.

But how to convince the skeptics? Cue Sarah Redmond, an associate at Maine Sea Grant, a federal-state partnership partially funded by the National Oceanic and Atmospheric Administration (NOAA). Not only did she supply Maine Fresh Sea Farms with its initial kelp spores, but she also swooped in to help convince Carlson’s brew crew that he hadn’t yet lost his malted marbles.

“I still wasn’t a hundred percent sure what we were doing,” says Carlson. “That’s where Sarah came through — she laid out scientifically what we could expect to extract. That allayed some of the fears.”

Redmond, for her part, savored a chance to promote seaweed’s nutritional gains.

“All over the world, people are realizing the benefit of seaweed for food,” Redmond told the Bangor Daily News. “That’s why the Marshall Wharf beer is so exciting.”

For the initial concoction, Carlson chose to combine the kelp with one of his existing formulas, the dark and hearty MacFindlay Scotch Ale.

For the initial concoction, Carlson chose to combine the kelp with one of his existing formulas, the dark and hearty MacFindlay Scotch Ale.

“We hedged our bets — I knew we couldn’t throw [the kelp] into a really light beer,” says Carlson. But the MacFindlay “could take a big old punch in the gut and then stand up to it.” The first 200-gallon batch contained six pounds of dried sugar kelp, about a 10-to-1 ratio of beer to seaweed. “We really wanted the seaweed to be there, not be a gimmick,” Carlson says.

On July 16, the brewing formally company unveiled Sea Belt, a 8% abv featuring top notes of iodine, potassium, and what Carlson calls “that magical umami,” all interplaying with the chocolate and malt flavors of the original ale. (Sea belt, FYI, is one of the common names for sugar kelp.)

So, kelp and beer: two tastes that taste great together?

“The seaweed certainly showed through,” says Carlson. “I have to admit I’m thrilled with it.” As were the local patrons, who’d been eagerly anticipating the initial batch and then helped make an unanticipated quick work of it.

Just two weeks ago, Marshall Brewing Co. canned its first Sea Belt shipment, which went to market in Wells, Maine. Carlson has the inventory on hand to brew up to seven additional batches before next harvest (the sugar kelp season runs from January to May). But don’t start sniffing around your local chichi craft brewery just yet; though inquiries have thus far come from some 28 states, the beer will remain within Maine’s confines for the foreseeable future.

“People just don’t have a clue how small we are,” Carlson says with a laugh.

Short-term admonishment in the meantime: Take this all as a hint to think outside the pumpkin ale already.