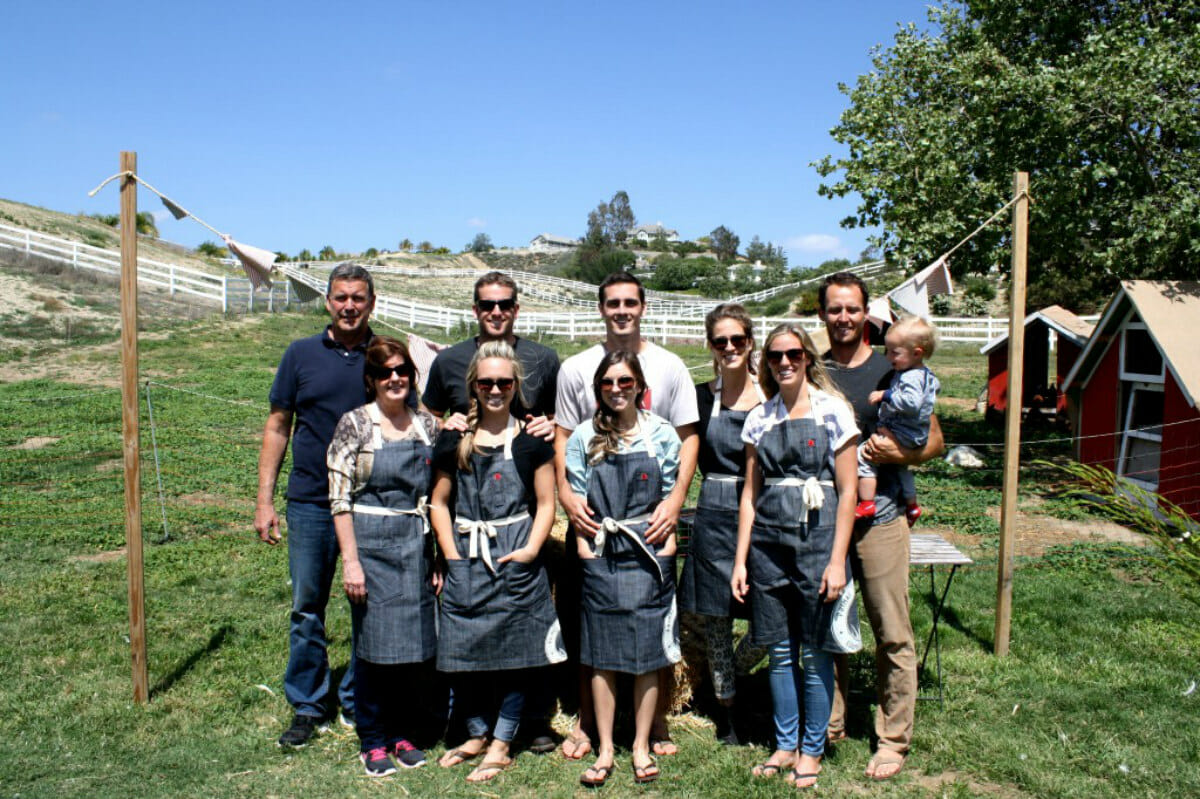 Modern Farmer: Could you tell us a little about your farm?

Paul Grieve: We are what’s called a pastured livestock farm, which means we basically put animals outside on grass. That is the fundamental rule of Primal Pastures. We started in April of 2012, just trying to grow food for our family. We put a couple posts on social media and the whole thing just spiraled out of control. Our story is that we ordered 50 chicks for ourselves, because we got tired of all the industrial food stuff that we were finding in the grocery store, and we were just going to raise them up and eat them.

Then we figured we should try to sell a few of them to cover the cost and whatnot. We ended up selling all 50 of them within a couple of weeks, at a pretty good price. At that point we thought it was interesting, but not that big of a deal, so we did 100 the next month and the same thing happened. Then 150, the same thing happened, then 200, then 500, and then 1000. It just kept happening. We figured we had a business on our hands, so in April 2013, we started focusing on it as a business. Since then we have added pastured turkey, lamb, and now we work with two local farms to do pastured beef and pork as well.

MF: Where is the farm located?

PG: We are in Southern California on seven properties total, about 90 acres. The home base is only two and a half acres, but we raise on a lot of land. We don’t own anything, we lease everything. Due to that we are way spread out. We are from Big Bear Mountain, which is East of Los Angeles, to San Diego. There are several reasons why we are like this: The first reason is because land is really expensive in Southern California and it is difficult to get a large amount of agricultural land for a reasonable amount. We have never taken any debt, never used a loan, we have grown everything straight off of profits. We don’t want to have one giant farm, we want to really cultivate this local food system where we can work with other local folks. We are like the hub. We combine all that stuff and sell it and home deliver it across Southern California.

MF: It seems like social media played a role in your growth as a farm. When did you decide to join Instagram?

PG: Maybe a year and a half ago we decided to join Instagram. When you build a good farm it should be beautiful and there is nothing easier than Instagram, as far as just taking a photo and posting. It takes two seconds. Instead of spending a lot of time and effort on print media we have had good luck just taking basic pictures when we are outside doing daily chores. People seem to love it. Instagram makes a lot of sense for farms in general.

MF: Do you mostly use it as a marketing tool?

PG: We are mostly marketing with it, but we definitely connect with folks too. My sister, Bethany, runs our blog and she has a little more time for the social media stuff. When we were first getting up and running, we were always out connecting with other people, trying it find who was local. Trying to get people to blog about us. Anyway you could get a hold of folks, we would do it.

MF: How is the ongoing drought affecting your operation?

PG: The drought sucks for sure, no doubt about it. For us, with pastured poultry in Southern California you are irrigating. That is just part of the game out here. The drought is difficult, water prices are high. We started the farm in April 2013, so the drought was already pretty heavy at that point. The drought is priced into our product. It is not like a 100 year old cattle ranch where we are used to having water. It is almost like starting a business during The Great Depression, where you almost don’t know any better. I think it is an advantage, starting in some of the hardest farming conditions in California’s history is going to play to our advantage. That is all we know, we are coming in at a time where you have to understand permaculture, you have to understand soil health, and how to maximize your water. It’s not like we get the free ride of 40 inches of rain a year. We have to learn this stuff, otherwise we die.

(This interview has been edited and condensed.
All images courtesy Boondockers Farm.)

Popular
The Future of Hay Drying in AmericaLindsay Campbell
How to (Actually) Get Rid of Fruit FliesEmily Baron Cadloff
7 Smokable Plants You Can Grow That Aren’t MarijuanaBrian Barth
The Story of Brazil Nuts is Kind of NutsAndrew Amelinckx
When Tractors Invaded D.C.Sam Brasch
Explore Modern Farmer
Related
MTMF
How One Organization is Restoring a Community of Black FarmersEmily Baron Cadloff
Cookbooks, Food & Drink
7 New Cookbooks We’re Cozying Up With This FallShelby Vittek
Food & Drink, How-To
6 Ways to Preserve Your HerbsLindsay Campbell
Food & Drink, Immigration
So Much For Eating LocalEmily Baron Cadloff
wpDiscuz
We use cookies on our website to give you the most relevant experience by remembering your preferences and repeat visits. By clicking “Accept”, you consent to the use of ALL the cookies.
Cookie settings ACCEPT
Privacy & Cookies Policy