What makes a $2 million ham so valuable? 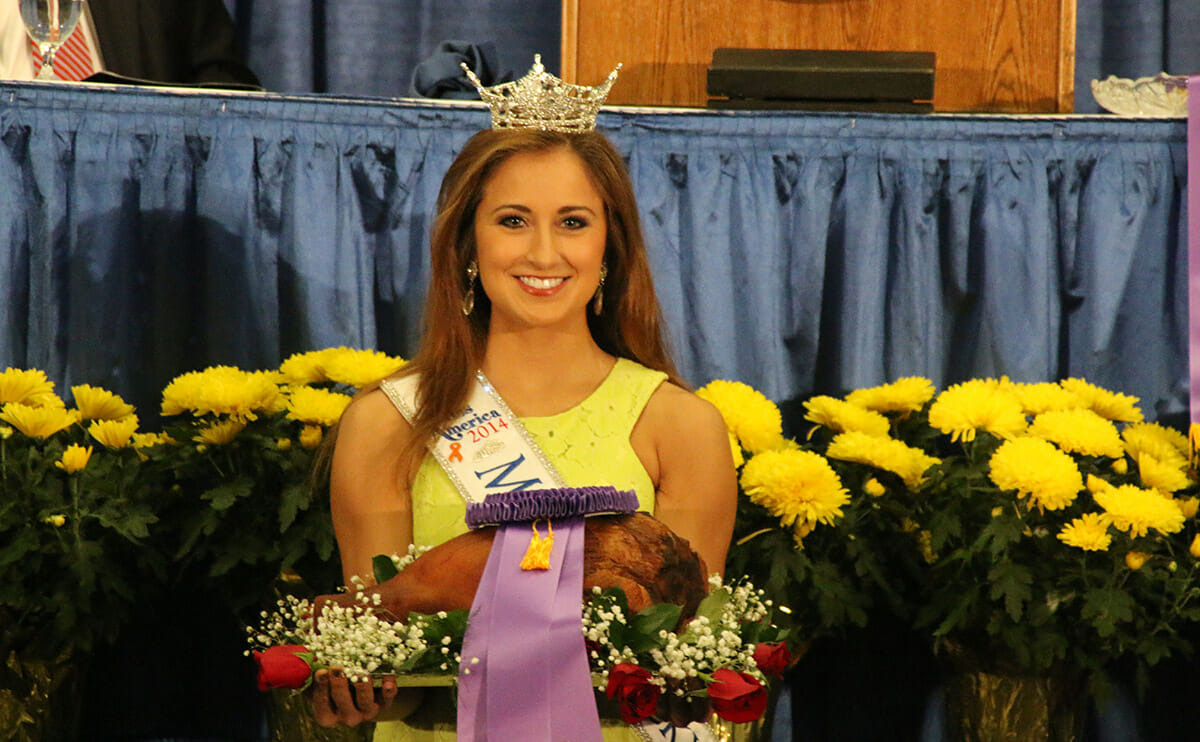 In Kentucky, auctioning off hams for six or seven figures is a tradition of sorts. Every August a competition is held at the state fair in Louisville, where contestants enter their hams to be judged by a panel of judges. The ham that takes the top place (and the blue ribbon) is then presented at the Kentucky Farm Bureau Country Ham Breakfast & Auction where it is auctioned to the highest bidder and the money always goes to charity. Organizers and journalists both remark upon the tradition’s levity, noting that it’s as much a public relations opportunity for corporations and politicians who open their pocketbooks as it is a food contest.

Still, for the producer whose cured ham wins grand champion, the auction is a big deal.

“It normally sells for about $60, so it’s a bit amazing to us,” says Beth Drennan, who, with husband Ronny, owns country ham company Broadbent B&B Foods in Cadiz, KY, which produced the record breaking pork product. The Drennan’s prize-winning ham weighed in at 15 pounds, making that $125,865 per pound at auction.

The Drennans are old hands at getting their hams past the judges and into the auction; 2014 marked their ninth win.

The judges, Ronny says, are looking for certain visual qualities: a tight and trimmed “butt face,” the flat edge of the hind leg where its severed from the body; a black butt face color with a brown ring of fat; and a taut, pecan-colored skin. The judges will inject a probe into the ham to help them smell if the ham cured fully.

The Kentucky Farm Bureau Country Ham Breakfast is an annual state fair event. It’s a 1600-person party that brings together the state’s ag leaders, elected officials and corporate officers to scarf down biscuits, eggs and, of course, ham. The Drennans, as winners, were seated at the breakfast’s lead table alongside Kentucky Governor Steve Beshear, a Democrat, U.S. Senator Mitch McConnell, a Republican, and the Kentucky Agriculture Commissioner James Comer. The winning ham is dressed on a silver platter and garnished by roses. The current Miss Kentucky parades the ham around for viewing by the bank presidents, CEOs and small business owners who bid on it. 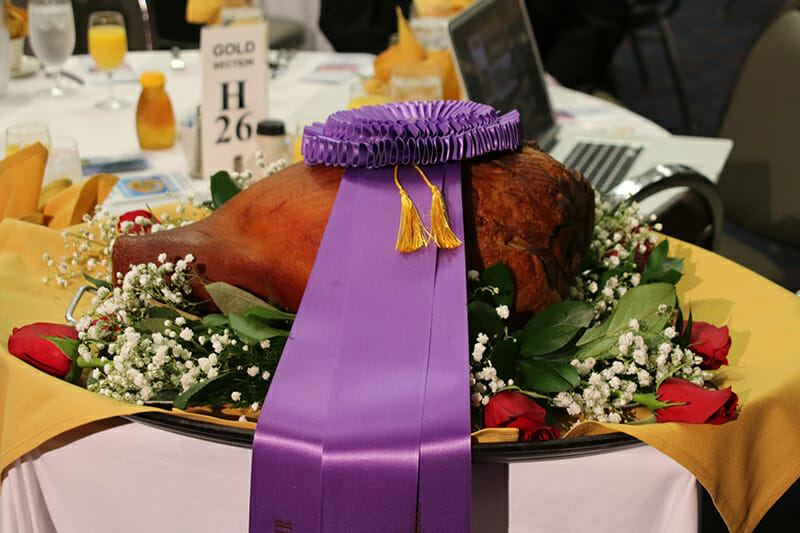 This prize-winning ham weighed in at 15 pounds, making it $125,865 per pound at auction. / Courtesy Kentucky Farm Bureau

“It’s an ironically majestic finale for a hind end that spent many of its days ignobly covered in mud,” writes Louisville-based food journalist Steve Coomes in his book “Country Ham: A Tradition of Hogs, Salt and Smoke.”

The tradition was cooked up 50 years ago when the Kentucky Farm Bureau and other state agricultural leaders were looking for ways to keep the state fair focused on its agrarian traditions.

“They were seeing that the emphasis had shifted and wanted to preserve agriculture’s role there,” said Kentucky Farm Bureau spokesperson Dan Smaldone. Part of that preservation included the country ham auction, which highlighted the state’s hog industry as well as Kentuckians’ prowess at curing ham.

The event today has little to do with ham or pork production, says Smaldone. The breakfast is an opportunity for politicians to stump before a room filled with voters, donors and reporters. And last year, Smaldone remembers, the political speeches became rather heated as Beshear and McConnell traded barbs over Obamacare.

The entire bid goes to charity, usually education or health nonprofits. Not a penny goes to the Farm Bureau or the winning ham maker.

The winning bids began accumulating their current Scrooge McDuck levels once competing bidders began combining their cash. For example, say a bank president bids $750,000. Then a doctor bids $800,000. Instead of capping it all there, the two parties decide to both throw in $800,000 to be good sports. That’s what happened in 2010, when the winning bid was $1.6 million. A pairing happened again this year.

The entire bid goes to charity, usually education or health nonprofits. Not a penny goes to the Farm Bureau or the winning ham maker, Smaldone says.

The contest brings a great deal of attention to one expensive ham, but some lament that it does little to promote appreciation for the Appalachian art of country ham, a tradition that dates back decades. Ronny recalls a farming childhood spent curing homegrown hams.

“It used to be every farmer cured ham, but there’s not too many of them left that does that,” says Drennan, who cures 12,000 hams a year. “It’s a dying art.”