As climate change increasingly wipes out the fruits and nuts we eat today, we'll be turning to places like this for help. 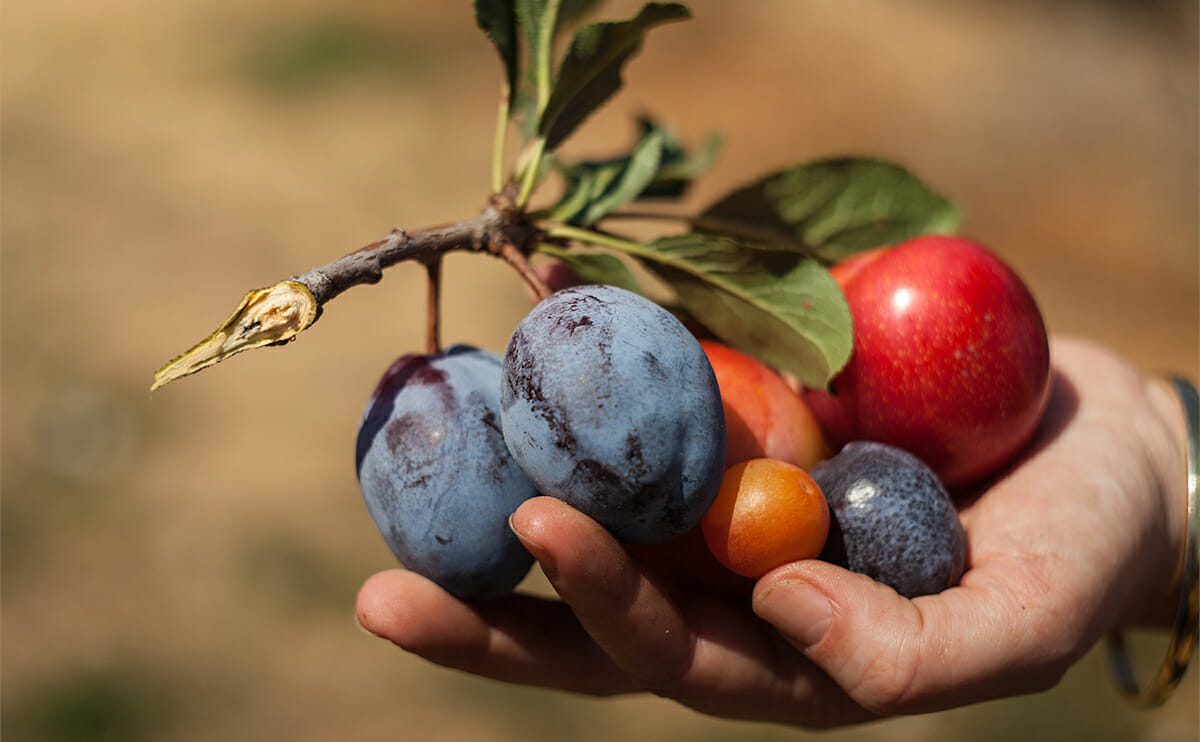 Almonds, apricots, cherries, figs, grapes, kiwi, olives, peaches, pistachios, plums, pomegranates, walnuts: The repository’s list adds up to 253 taxa and so much mouth-watering diversity that a 30-foot stroll will net you five kinds of plums. But as anyone who’s grown mealy peaches from a promising pit may suspect, this incredible richness can’t be protected by saving seeds. The only way to replicate these crops is to do an end-run around cross-pollination by clonally propagating them: by planting a live, healthy cutting. For cultivated fruits and nuts not backed up by living collections, gone from our farms means gone from the world. 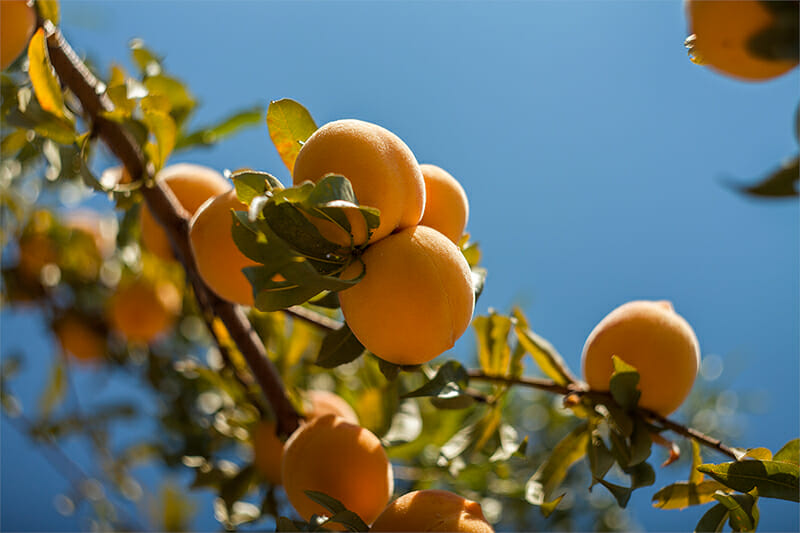 California’s $17.2 billion fruit and nut industry may look too big to fail, but climate change-driven increases in temperature, drought, flooding, and disease aren’t just coming for this mostly Mediterranean climate; they’re already here. The near future is predictably grim: A 2009 UC Davis study concluded, “Areas…for growing walnuts, pistachios, peaches, apricots, plums and cherries are likely to almost completely disappear by the end of the 21st century. For…apples, cherries and pears, very few locations with safe chilling levels were found to exist today, and…virtually none will exist by mid-century.” That’s a big threat to food security (California fruit and nuts account for more than half of the nation’s tonnage), and the main reason this repository is worth caring about. 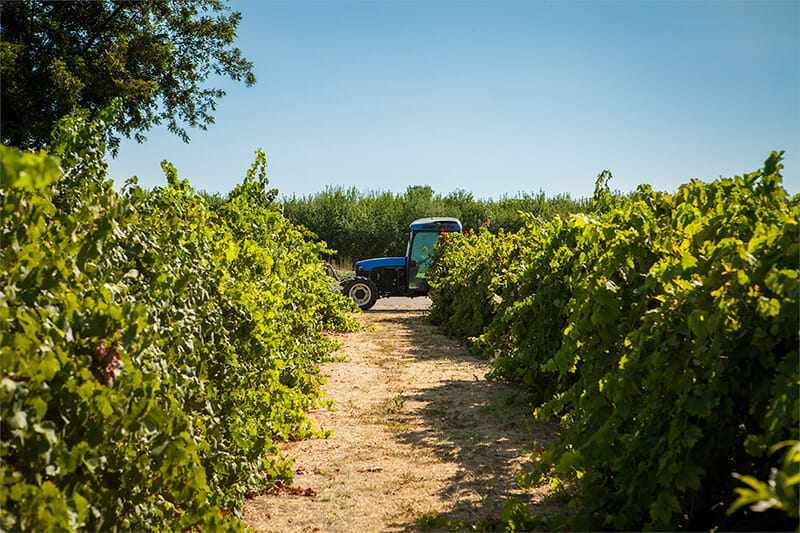 Banking current crops (and distributing cuttings to anyone who asks) is vital, but it’s just one small piece of the facility’s larger mission. By maintaining the crops’ “wild progenitors” — the tiny olives, odd-tasting grapes and all-pit-no-pleasure peaches that are the ancestors of modern crops — the repository is preserving a huge index of genetic traits that we’ll desperately need in the future, including drought-resistance, heat-resistance, disease-resistance and more. Collectively, this stock is called germplasm, or as Burge puts it, “one of our most valuable resources going forward.” 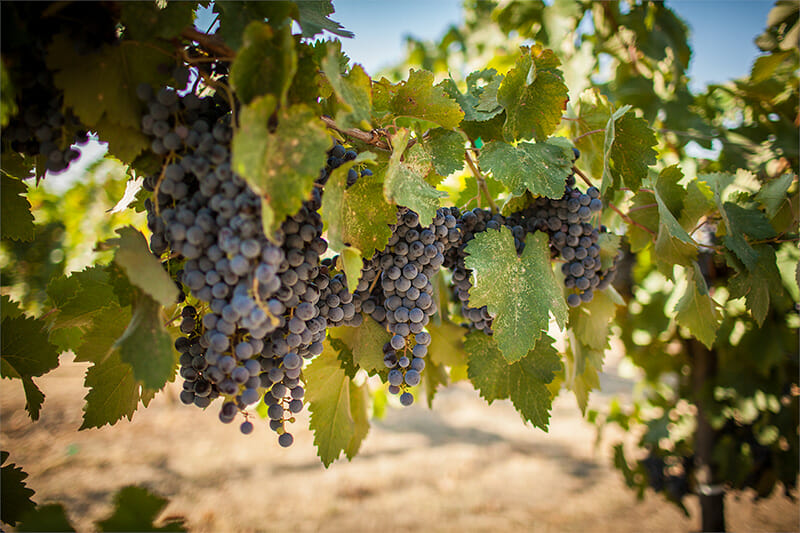 Consider the vineyards of northern Sonoma County, heavy with pinot noir grapes that require a cool climate. As temperatures rise, growers will respond by switching to other, existing grapes that are slightly more resistant to warmth. “And sure, they can probably do that for a while,” says Burge. “But at some point, they’re going to run out of genetic variation in existing cultivars and they’ll have no choice but to breed more heat resistance, and more disease resistance.” (As California gets warmer, it’ll also get wetter, requiring heavier doses of sulphur and other anti-fungals to combat disease.) To breed in new traits, you go back to nature — you go back to wild progenitors. 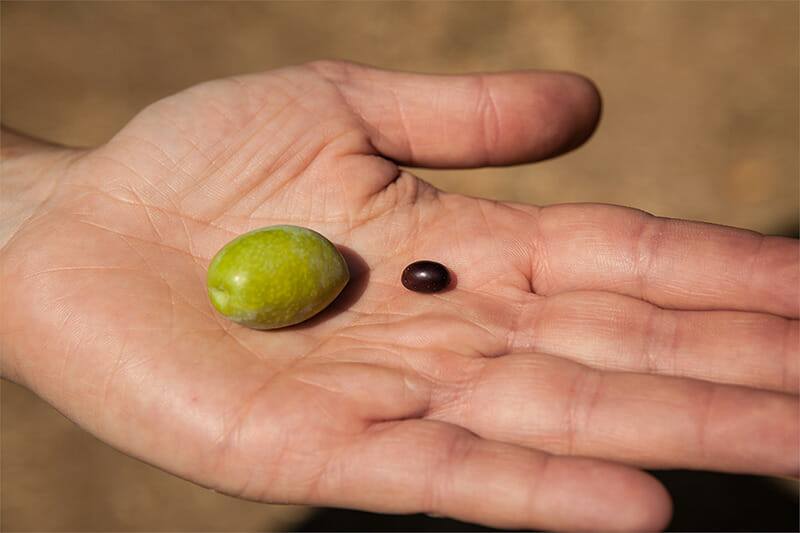 The differences between a cultivated fruit and its wild ancestor — the extent to which we humans have successfully overhauled them to fit our preferences — is a little shocking the first time you really see it. Uncultivated fruits are generally smaller, less sweet, have thicker skins and less flesh; cultivated plants have bigger leaves, thicker stems, and the fat vines necessary for shunting water and sugar to fruits (and supporting the weight of their increased size). We’ve changed crops so much, and for so long, that in many cases their true, untouched relatives don’t even exist in the wild anymore. “Vitis vinifera is like that,” says Burge. “It’s one of these organisms that seems to have been virtually wiped out at the same time it was domesticated. We managed to backcross all of them to wild stock over thousands of years, so the wild stock disappeared.” 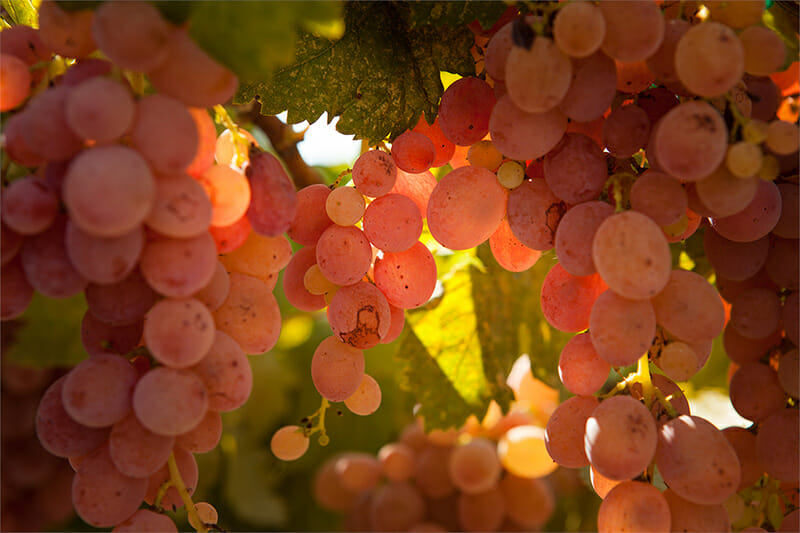 Table and wine grapes are the repository’s main focus, with about 10,000 vines representing 5,000 varieties and species of grapes from all over the world. And while the wild grapes may technically have all been interfered with at some point in our 6,000-plus-year history with them, they’re still pretty untamed. A velvety, sun-warmed, unidentified species of wild Costa Rican grape pops with totally unclassifiable sweetness, despite being small and packed with seeds. Fox grapes sneak up on you with some sort of unfriendly but exciting muskiness. A tart scuppernong grape is intense in a fantastically un-supermarkety way. “These guys are really divergent,” Burge says, mouth full of them. “They’ve been evolutionarily separate from the table and wine grapes for 40 or 50 million years.” 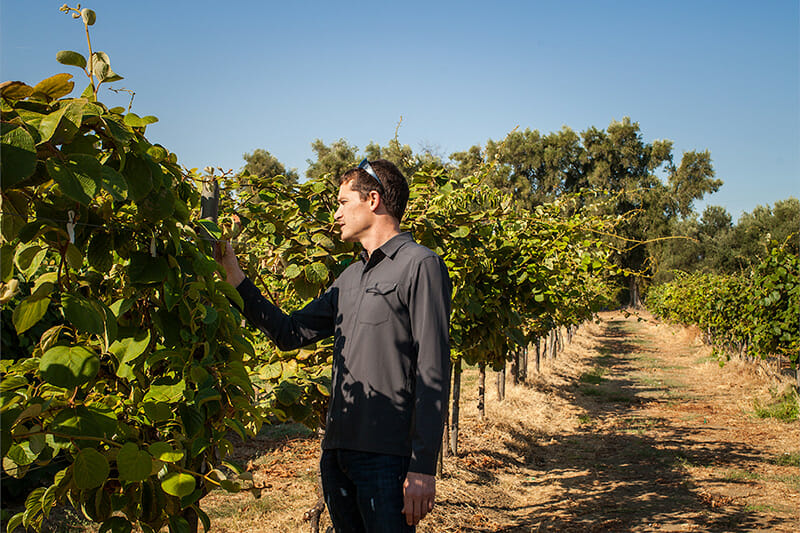 Despite the fact that he can sometimes be found earnestly inspecting kiwifruit — or anything else that’s green (including, he confesses, salad bars) — Burge’s area of research is grapes. It’s also, as it happens, a solid illustration of how vital this repository is to our food future. “We don’t understand what genes allow a plant to detect warmth,” he says. “We don’t understand, for the most part, what combination of environmental variables trigger a plant to flower, and then the subsequent event — fruit-ripening — we don’t understand that at all. And then at the end of the season,” he adds, throwing up his hands, “how do they sense changes in day-length and temperature to know when to go dormant to avoid being injured by first freeze? These are all things we need to understand to build the capacity for resistance to climate change.” 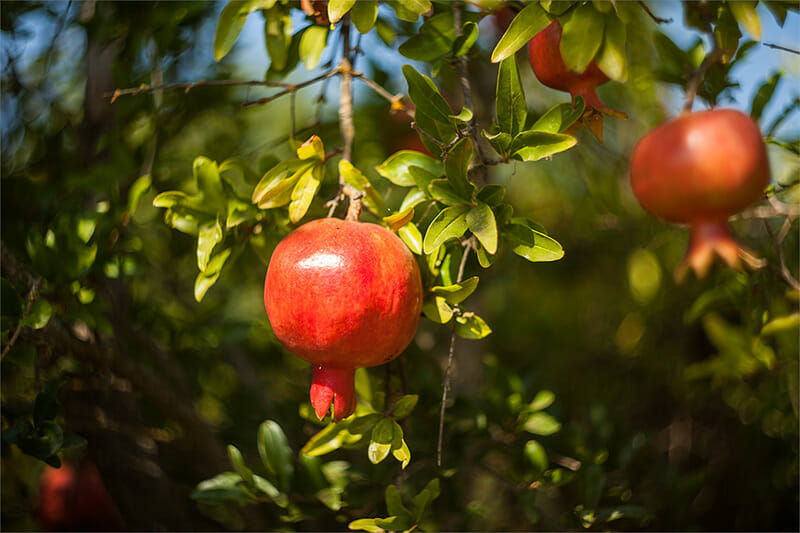 The repository’s enormous grape collection is one of the few places big enough, diverse enough, and alive enough to allow Burge to find answers. It’s a sample size so massive that any variation he sees — in the timing of when the leaves or flowers come out, or when the fruit ripens — “should be genetic, since they’re growing in exactly the same conditions.” By collecting that kind of big data, Burge and colleagues will be able to do a range of problem-solving, starting with the construction of models that reveal how different grapes respond to different temperatures, and which ones are going to be better at dealing with environmental changes like increased warmth late in the season, or drought. 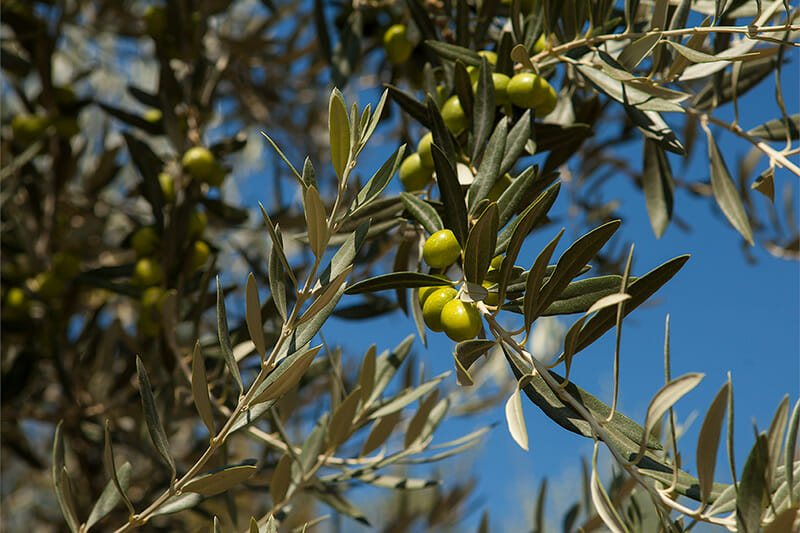 Burge will also be able to combine that data with genome sequencing to begin figuring out exactly what genes are involved in those adaptations. That work won’t deliver answers that apply to olives, pistachios, or anything not a grape — “we’ve learned recently that plants vary widely in their genetic basis for stuff like this,” he explains — but identifying a gene that helps grapes negotiate changing temperatures would have huge implications for the country’s grape industry (which contributes a reported $162 billion to the U.S. economy). “If we can compare 50 varieties of the genomes simultaneously,” says Burge, “we’ll have a really good sense that this is the gene that controls a trait across all grapes, which means if we breed it back into any other grape, we know we’ll be able to give it that quality.” 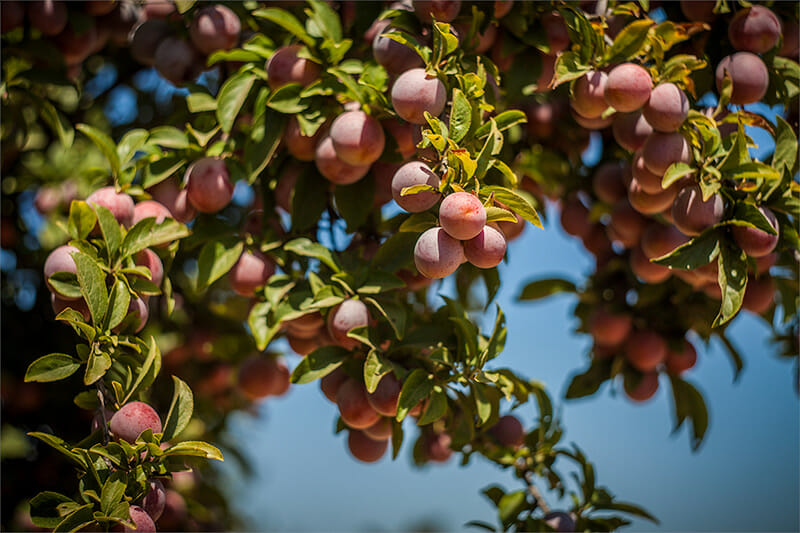 “I couldn’t do this work anywhere but here,” Burge adds, nodding at rows of grape vines that unfold for acres. “Having a block like this is a perfect resource for experiments and genetics. If it were a smaller sample size, we just couldn’t do it.” Burge isn’t the only researcher at work in the repository — there are ongoing projects specific to plums, walnuts, almonds, and more — but they all have at least one thing in common: They’re racing the clock. 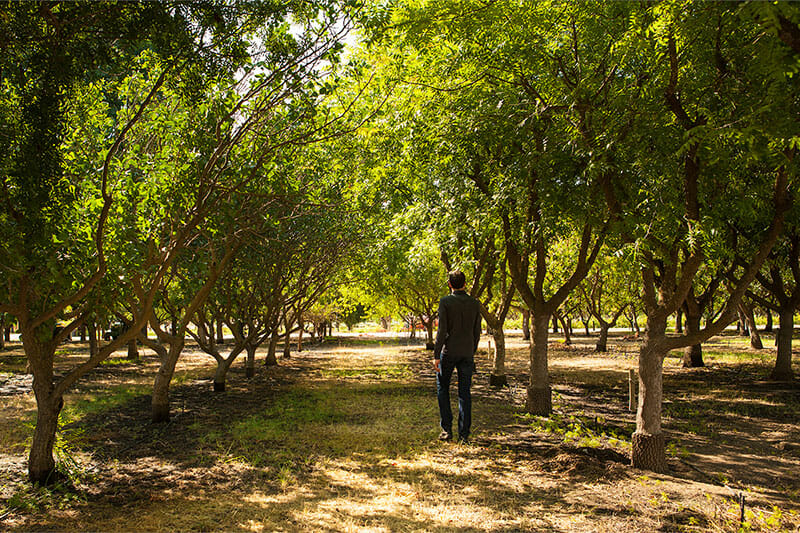 “There’s a huge rush right now,” he says, pistachio nuts crunching underfoot, “because we’re already losing stuff.” He mentions a recent $50 million grant from the European Union that’s sending botanists all over the world to collect germplasm from as many “landraces” as they can, but adds, “it’s mostly focused on seed crops, because it’s really easy to take a big bag of seeds and just throw them in the refrigerator. If you’re going to do the same project for clonal crops, you’d have to do something like this on an enormous scale.” 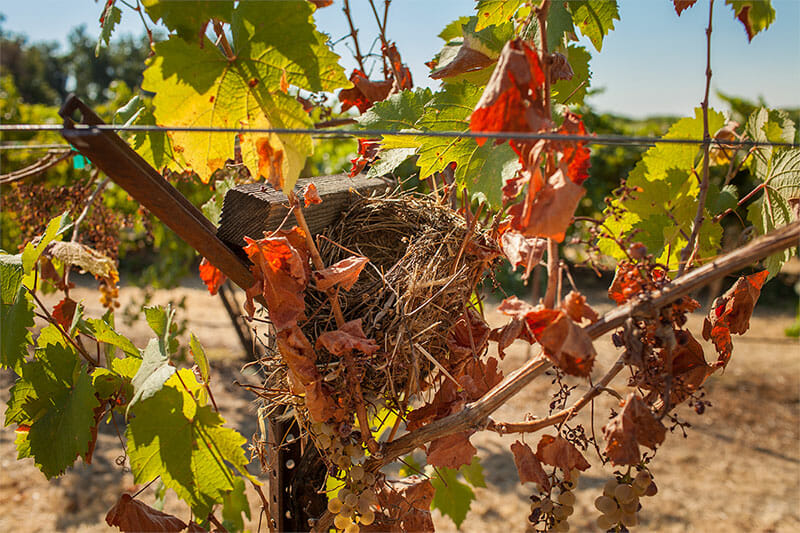 Considering the role this place will play in our future — and how few of them there are (the USDA maintains another national repository in Corvallis, Oregon; a smaller, citrus-focused version in Riverside; and a handful of seed banks) — it’s a little unsettling to see how, as Burge puts it, “wild and wooly it is out here. There are basically three guys who maintain this whole facility,” he explains, making his way down rows where vines carpet the ground, “and they don’t have a lot of money to maintain the collections. [Horticulturalist] Bernie [Prins] is in real damage control mode just to keep it going, but they do a pretty incredible job.” The enormity of their task is clear as soon as you pull through the gates of Wolfskill Ranch. After three hours of walking — during which you cover maybe a third of the grounds — the reality of what it must actually take bowls you over. 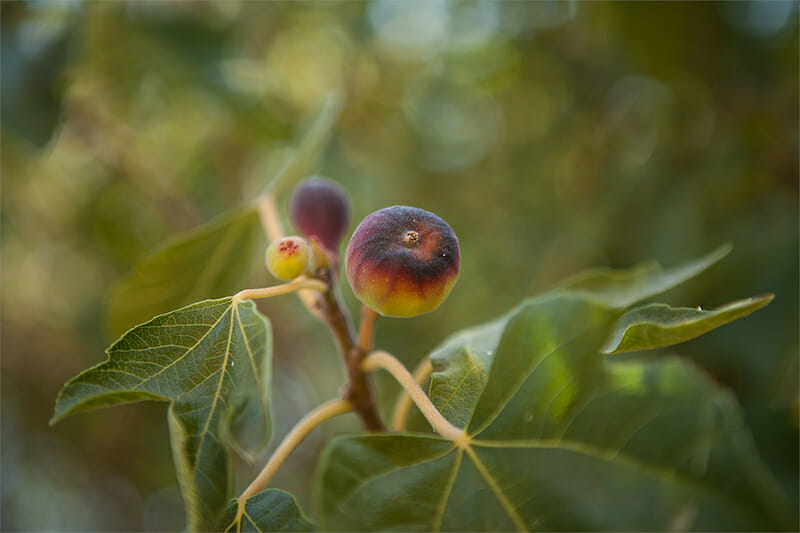 Full of grapes, stomach regretting a lot of almost-ripe peaches, hands sticky with figs, it’s hard not think about the mirror that crops hold up to the people who eat them. Today, they reflect not just our tastebuds, aesthetics, and migrations, but our uneasy relationship with a planet we’ve changed more radically than any plant. If that makes you feel fragile, uncertain, even frightened, that seems about right. If it makes you want to support science funding, support farmers’ markets, or even grow something yourself, even better. Just know that if you email Bernie for cuttings, you’ll end up in line behind a lot of scrambling researchers, and you’d better be ready to cover shipping.

Popular
Is Agroforestry the Key to Hardier Row Crops?Shea Swenson
7 Smokable Plants You Can Grow That Aren’t MarijuanaBrian Barth
Where Has All the Mustard Gone?Chloe Faure
Why Don’t We Eat Turkey Eggs?Dan Nosowitz
Goat Sex: Everything You Wanted to Know But Were Afraid to AskAndrew Amelinckx
Explore Modern Farmer
Related
Environment, Food Waste, Labor, Meat
Is There Such Thing as Good Meat?Emily Baron Cadloff
Environment, Food & Drink
Where Has All the Mustard Gone?Chloe Faure
Animals, Environment, Health
To Stop New Viruses Infecting Humans, We Must Protect Bat HabitatAlison Peel, Peggy Eby, Raina Plowright
Animals, Food & Drink, Lifestyle
The Great (Sticker Shock) ThanksgivingLindsay Campbell
wpDiscuz
We use cookies on our website to give you the most relevant experience by remembering your preferences and repeat visits. By clicking “Accept”, you consent to the use of ALL the cookies.
Cookie settings ACCEPT
Privacy & Cookies Policy