War Is Hell: The Fight to Beat Mosquitoes

How do we hate thee? Let us count the ways. 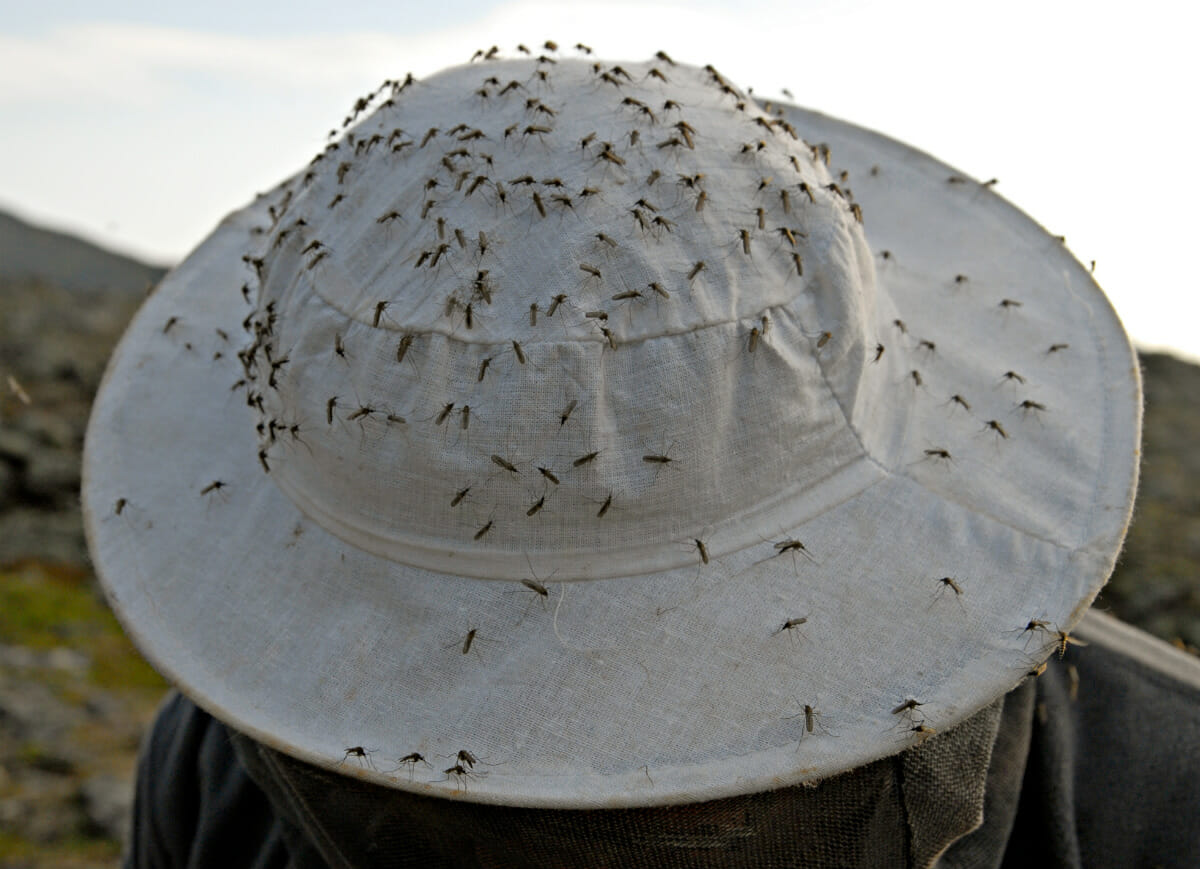 To combat inconveniences ranging from moth-chewed blankets to oozing sores, homemakers consulted domestic guidebooks – almanac-style encyclopedias chock full of detailed solutions to tons of dilemmas. Bitten by a spider, snake, or other creepy crawly? Swaddle the area with a rag saturated in spirit of hartshorn (aqueous ammonia), made from the hooves and horns of a red deer. Or, better yet, track down a surgeon and have him cut out the itchy area, suggests Gunn’s Domestic Medicine, or Poor Man’s Friend in the Hours of Affliction, Pain, and Sickness, a go-to tome from the 1830s.

We continued to fixate on skeeters in the 20th century. The buzzers inspired a major propaganda campaign during World War II, thanks to the fact that they transmitted malaria. The mosquito-borne illness was responsible for nearly a half-million hospital visits and the deaths of 300 American soldiers. In response, the Army’s Medical Department assaulted malaria-addled areas with DDT or “bug bombs,” and produced posters and calendars reminding troops to fight the blood-sucking enemy. A 1943 Disney short – ordered by the government and starring the seven dwarfs – argued that “the winged scourge” was “public enemy number 1.” Doc, Dopey, and co. weed-whacked their way through swamps, demonstrating how to destroy the insects’ habitats.

We’ve battled different skeeter-borne illnesses over the last few decades. This summer, West Nile took a backseat to the Chikungunya virus. Transmitted by aedes mosquitoes, the virus was previously present in Africa and Asia and then popped up on the Caribbean island of St. Martin in December. By July, cases were recorded in Florida. The state still has the highest number of infections, with 138; New York ranks second, with 96. The virus, which causes fevers, nausea, and potentially debilitating joint pain, is rarely fatal, but is certainly painful enough to sideline infected individuals. (“It’s something sufferers would only wish on their worst enemies,” says William Schaffner, M.D., a professor of preventive medicine and infectious diseases at the Vanderbilt University School of Medicine.) Despite the low mortality risk, the virus has attracted a lot of attention – possibly because our contagion fears are on high alert as a result of Ebola outbreaks. Though there’s currently no specific treatment for Chikungunya, save run-of-the-mill fever reducers and painkillers, an experimental vaccine recently underwent its first trial.

Obviously, no one wants to be bug bait. Our contemporary habits for keeping ’em at bay range from slathering ourselves in DEET-filled sprays to lining windowsills with lavender-soaked ribbons. Some folkloric examples: barbecuing rosemary stalks, slathering on lemongrass pulp, lining your patio with pungent marigolds, and rubbing your skin with peppermint or spearmint leaves. Katie “The Wellness Mama,” a prolific eco-blogger, advocates a DIY spray made from essential oils, such as eucalyptus, cedar, catnip, or lavender, combined with witch hazel, distilled water, and vegetable glyercin. 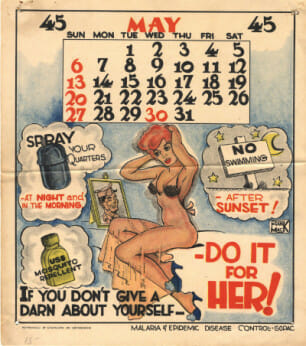 A mosquito propaganda poster from the World War II era.

Do these tactics pass muster? Dr. Schaffner isn’t totally sold. “It’s totally understandable to have a skepticism of chemicals,” he says. “But think of it this way: It’s ‘natural’ to develop appendicitis, but most of us would prefer not to – we’d call up a surgeon.” It’s the same with bug bites. “Citronella offers some protection, but it’s a modest effect,” he says. He figures, why get a dozen bites when you could just get one or two? While he doesn’t discourage people from setting out citronella candles during a backyard meal, he says that the scent won’t cut it when it comes to really repelling the insects. “If you’re seriously interested in avoiding being bitten by mosquitoes, DEET is the way to go,” says Dr. Schaffner.

For maximum protection, the CDC recommends slathering DEET-filled sprays on exposed skin and atop clothing. (FYI: Concentrations above 50% don’t seem to provide any noticeable benefit above concentrations in the 20%-50% range.) Dr. Schaffner thinks they’re safe bets.

But get this – turns out we all should have paid more attention to Disney’s whimsically fear-mongering video from the 1940s. One tried-and-true remedy involves eliminating standing water. We know that birdbaths and flowerpots quickly turn into mosquito breeding grounds, but we don’t tend to look up during our search-and-destroy missions. “If your gutters aren’t at the right pitch, they won’t properly drain, and will attract mosquitoes,” warns Dr. Schaffner. Fixing the angle can help evict the winged scourge, no chemicals necessary.

Popular
Is Agroforestry the Key to Hardier Row Crops?Shea Swenson
7 Smokable Plants You Can Grow That Aren’t MarijuanaBrian Barth
Why Don’t We Eat Turkey Eggs?Dan Nosowitz
Where Has All the Mustard Gone?Chloe Faure
6 Differences Between Llamas and AlpacasAndrew Amelinckx
Explore Modern Farmer
Related
Environment, Plants
Is Agroforestry the Key to Hardier Row Crops?Shea Swenson
news
The Fertilizer Shortage Will Persist in 2023Shea Swenson
Animals, Environment, Technology
Alaskan Salmon Face a Stream of New MinesBecki Robins
Animals, MTMF
Meet the Maine Teenager-Turned-Landscaper Thanks to Grazing GoatsBridget Shirvell
wpDiscuz
We use cookies on our website to give you the most relevant experience by remembering your preferences and repeat visits. By clicking “Accept”, you consent to the use of ALL the cookies.
Cookie settings ACCEPT
Privacy & Cookies Policy