What To Do With All of the Poo? - Modern Farmer
Animals

What To Do With All of the Poo?

Whether a farmer has one cow or 1000, manure problems are the likeliest route to trouble with the neighbors. 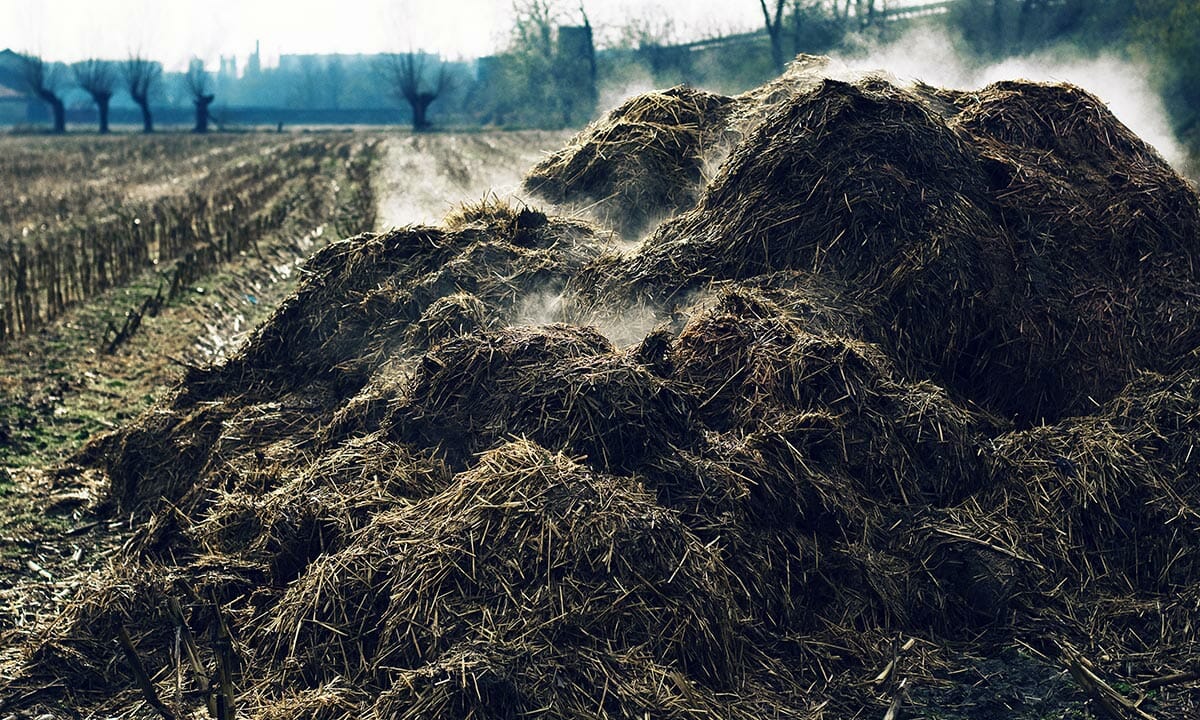 Everybody poops; animals just happen to do it more than the rest of us. A lactating dairy cow can produce 150 pounds of manure every day. Twenty broiler chickens will produce over four pounds a day. Whether a farmer has one cow or 1,000, manure problems are the likeliest route to trouble with the neighbors.

Though the exact laws and cut-offs vary by state, large farms are required to create and file Nutrient Management Plans. In essence, these plans detail the estimated amount of manure produced, how it will be stored and where it will end up. But if you’re one hog under the cut off, there’s no filing required. Unfortunately, many new farmers, hobbyists or animal lovers don’t realize the trouble they’re in until its too late. So how do you solve a problem like manure? From non-farmers – with a horse to the largest industrial hen houses – people are coming up with ingenious ways to take the damage out of dung and occasionally making some extra money while they’re at it.

One solution is the “manure share”. Think of it as the Craigslist of crap.

One solution is the “manure share”. Think of it as the Craigslist of crap.

These mostly localized manure shares pair animal owners with gardeners, farmers and landscapers in need. Using mailing lists or sign-up sheets, most farmers looking to unload their manure give their location, fee (if any), whether they deliver, if the waste is raw or composted and the kind of animal the manure is from.

Manure Shares are grassroots programs often run by agricultural extension offices or conservation programs. They don’t cost much to run but are a simple solution for animal owners with just a little too much to go around. They help farmers by giving them a place to dispose of animal waste that’s only real benefit is to the soil. They help gardeners by providing an inexpensive and natural source of fertilizer for their plants. And they help the public by cutting down on environmental damage or health hazards associated with raw animal waste.

“If it gets stockpiled, it becomes a water quality risk,” said Josh Monaghan, the Senior Program Manager for the King Conservation District near Seattle, WA. Their manure share has been around for about 20 years and is one of many run by conservation districts throughout the state. Though there’s never been a statewide initiative to launch these programs, annual cross training and communication between districts spread the idea. “This is one idea that doesn’t cost much to set up,” Monaghan added, “It’s just a matter of putting up a page on your website and inviting people to try it.”

Because there is no National Manure Share office or organization, it’s impossible to know how many of these programs are out there. They’re an important tool for farmers and gardeners alike but only for farms of a certain size. King Conservation District has had farmers trying to dispose of manure from 30-40 animals on the larger end but, overall, they don’t get much benefit from the program. “If you have even five or ten animals in a barn over winter, you’re never going to come up with a place to put all that manure,” Monaghan said. Those farmers need to find land they can fertilize year after year.

This brings us to the biggest problem facing modern day manure management: farmers and stockmen often work in separate geographic areas. Even with the urban animal craze, people in cities are still more likely to have backyard gardens or compost piles than a flock of chickens. For large farms, land that’s good for raising animals is rarely the best choice for a large crop like corn.

Transporting manure long distances from farms that produce it and farms that want it has presented a challenge with few solutions. Cornfields account for half of the land receiving manure in the United States, according to the USDA. If your animals aren’t in the Midwest, it becomes a few steps harder to peddle your poop. Unfortunately many of the regular customers for fertilizer in those states are small hobby farms or the organic industry (who are prohibited from using synthetic fertilizers). In agriculture, where each increased price is multiplied over thousands of acres, margins matter. And synthetic is cheap. As food and farm consultant Emanuel Farrow said, “If you’re talking about a large, non-organic grower without access to manure, they’re probably going to buy synthetic.” Without a large market, livestock farmers often spread more fertilizer than is safe on their available land.

And that leaves plenty of farmers with too much poop on their hands.

Turned into fertilizer pellets, sterilized manure can be safely applied to fields without the worry that pathogens could contaminate the produce.

This has led some farmers to come up with enterprising ways to get rid of excess excrement. In addition to some growing interest in using manure for energy production, farmers are monetizing manure in the form of organic fertilizers that can be shipped around the country. According to the USDA, the poop from poultry and cattle feedlots is drier than that from dairy or hog farms. Turned into fertilizer pellets, the sterilized manure can be safely applied to fields without the worry that pathogens could contaminate the produce. Farrow visited one farmer who was making about $40,000 a year pelletizing and selling the waste from his 20,000 hens. That’s not insignificant income for a farmer.

One Vermont dairy with 630 cows has taken it a step farther, composting and marketing their fertilizer under the name MooDoo. Their environmentally friendly method of turning manure into black gold started in 1989 and is now a full fledged side-business.

The problem with simple Nutrient Management Plans is that they rarely recognize poop’s potential. Farmers are less likely to over fertilize their fields (leading to nutrient runoff) or apply it on frozen ground where the manure can’t actually penetrate the soil if the manure isn’t treated as waste but rather a second source of income. Fostering manure shares or composting businesses isn’t just good for the environment; it’s good for business. Shit happens and it’s time we put it to work.

This is a very well written article and I enjoyed reading it!

Popular
7 Smokable Plants You Can Grow That Aren’t MarijuanaBrian Barth
New Solar Panels Allow Farmers to See the LightNaoki Nitta
6 Differences Between Llamas and AlpacasAndrew Amelinckx
Goat Sex: Everything You Wanted to Know But Were Afraid to AskAndrew Amelinckx
5 Differences Between Hens and RoostersShelby Vittek
Explore Modern Farmer
Related
Environment, Labor, Water
California Farms and Farmworkers Attempt to Recover From Record FloodsNaoki Nitta
Food Security, Labor, news
A New Egg Co-operative Has Hatched in the Western U.S.Lindsay Campbell
Food Waste, Plants, Technology
New Solar Panels Allow Farmers to See the LightNaoki Nitta
Lifestyle, MTMF
Meet the Farmer Helping Black Kentuckians Return to Their Agricultural RootsKelly Magyarics
wpDiscuz
We use cookies on our website to give you the most relevant experience by remembering your preferences and repeat visits. By clicking “Accept”, you consent to the use of ALL the cookies.
Cookie settings ACCEPT
Privacy & Cookies Policy