Why did the chicken cross the road? Because in Fair Oaks they have the right-of-way. 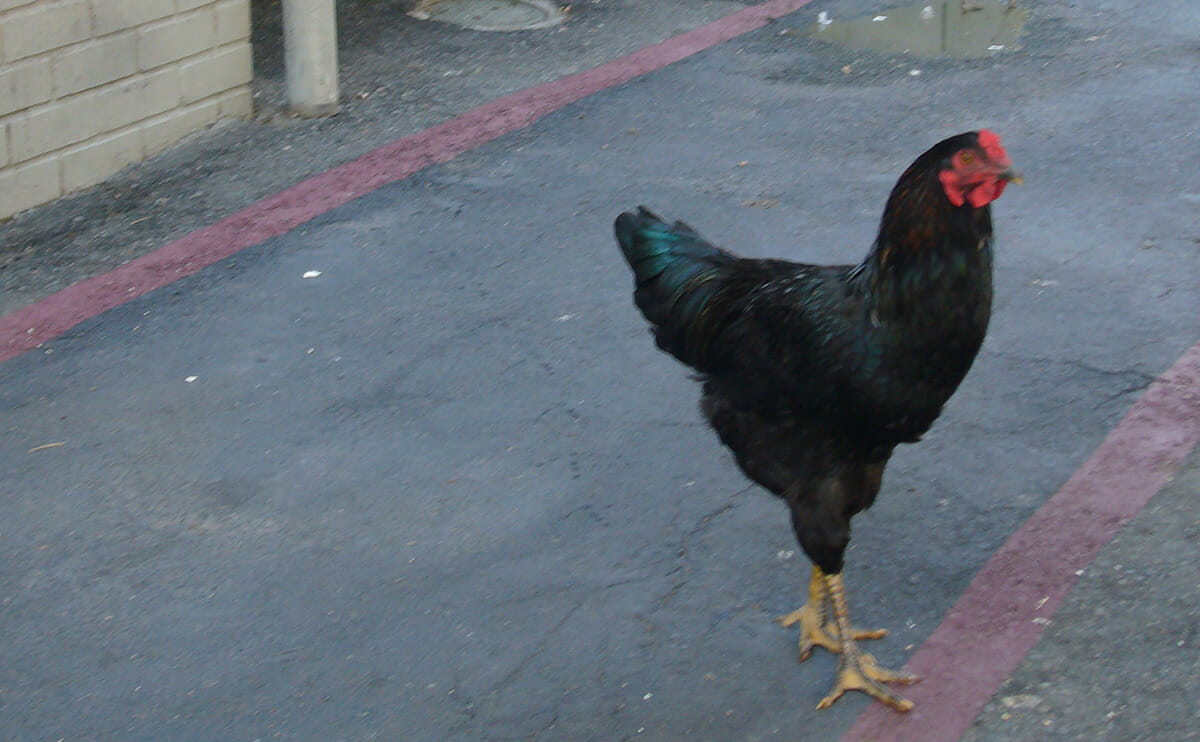 The chickens showed up around the 70’s and have been a part of Fair Oaks since. According to the Fair Oaks Chamber of Commerce, where the chickens came from is somewhat of a town mystery. It’s rumored that they are escapees from a poultry plant, or that they were dropped off or let loose by a resident. In 2012, KCRA news reported around 200 wild chickens lived in Fair Oaks. It’s unknown how much the population has grown since then.

Chickens of different breeds come and go, either by natural means or from occasional human intervention. Because of the egg-laying capabilities, hens are occasionally taken home; likewise, roosters are set free to join the wild chickens.

Locals consider the wild chickens part of the town’s eclectic atmosphere, and tourists find their presence oddly charming. Bob Clouse, a Fair Oaks honorary mayor candidate always makes a point to show visitors the chickens. (The town elects an Honorary Mayor, based on who raises the most money ”“ 50% to a charity of choice and 50% to the Chamber ”“ to represent them at ribbon cuttings, parades, or other Chamber events. Clouse describes it as “all fun, no pay.”)

“We occasionally see baby chicks,” he says, “And during free concerts in the park, the chickens can be found roosting in trees.”

Why did the chicken cross the road? Because in Fair Oaks they have the right-of-way. Drivers will stop to let meandering chickens pass, just as you would for a loose dog or pedestrians. Aside from the occasional complaint of noisy roosters in the early morning hours, the town embraces the unusual inhabitants.

“In many of the town’s stores, you can buy feed by the handful to feed the chickens,” says Clouse.

The Chicken Festival features live bands, a kid’s park, a five-dollar pancake breakfast, and an abundance of chicken-themed crafts and artwork. One of the most popular parts of the festival is the two-dollar tastings offered by local craft breweries. Nearby stores add even more chicken flair to their usual merchandise. Parking and entry are free at the Chicken Festival, as are the kid’s park and live music. Five dollars scores a wristband for unlimited carnival rides.

A barbecue contest was held for previous festivals, but has since been deemed a tad inappropriate for a poultry party. After all, the town’s chickens are usually resting in the trees watching the whole event go down.

Every year features a decorate-your-own-chicken art competition that attracts a variety of entries, from the expected to the outrageous. Upon signing up, each entry is given the same wooden chicken base. It’s a decorate-as-you please contest, with a few simple rules: the chicken must stand on its own, must be family friendly and it cannot be used for advertisement or religious purposes. Other than that, be creative!

But this year, the art contest may be overshadowed by a new event.

Sabrina Bernardo, the show director of the Fair Oaks Chicken Festival, has a special treat in store for this year’s fest goers: the first ever “Cluck ‘n’ Crow Contest.”

Contestants will dress up like a chicken, belt out their best cluck and otherwise attempt to be the best chicken impersonator on the planet (or at least the best at the Fair Oaks Chicken Festival). The winner earns a $100.00 cash prize.

From the large attendance rate to the breakfast and adored contests, this festival is as much about the community as it is the chickens.

“The large turnout and immense volunteer input that come with the Chicken Festival really give Fair Oaks community members a sense of place,” said Maureen Zamarripa, District Administrator at the Recreation Foundation. Fair Oaks has this little uniqueness about it, and the whole town gathers to celebrate it.

Bernardo sums it up this way: “It’s a celebration of the chickens, the town and the local flair.”