Corn kernels of nearly every hue of the rainbow are being turned into earrings, necklaces, bracelets, headpieces and wall hangings. 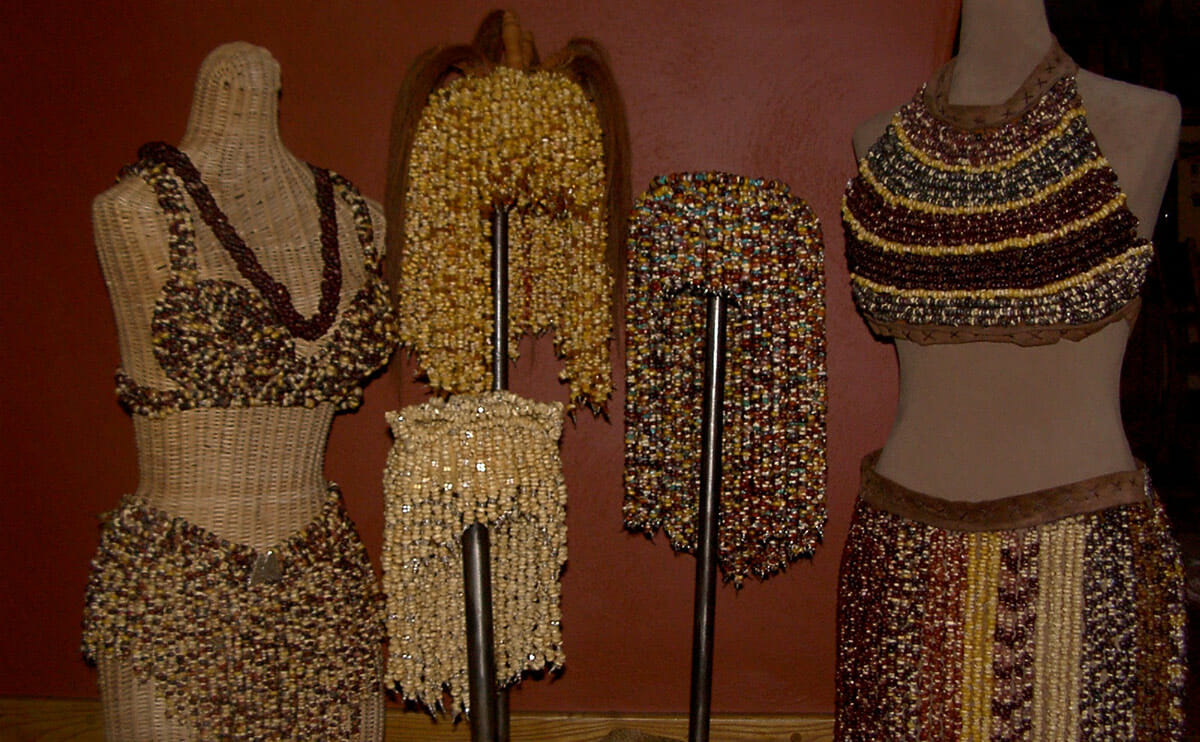 Corn kernels that come in nearly every hue of the rainbow are being turned into earrings, necklaces and bracelets in addition to headpieces and wall hangings – call it “corn couture.”

Heidi Scott first got the idea to create intricate jewelry pieces from corn back in the early 1990s when her Dunnell, Minnesota, farm flooded. In an attempt to salvage a few kernels, she made a small pair of earrings to wear. Her friend decided she wanted a pair, too, so Scott made another. Soon after, the local newspaper and TV station did a story on Scott and her creations. Scott was convinced she had a business on her hands, and Corn Woman Jewelry and Art was born.

Scott made one headpiece, which combined corn with turquoise, in honor of American troops.

“My main customers are people that used to live on a farm,” said Scott, who still lives on her Dunnell farm and also works as a massage therapist. “Some even have saved corn from their farm and send it to me to make a piece for them. Otherwise my customers are a beautiful variety of people that have a connection with — or fascination for — agriculture.”

In addition to jewelry pieces, Scott makes other clothing items, like head pieces and “loincorn” skirts. She complements the corn with semi-precious stones, leather and feathers. “The loincorn skirts are beautiful on the body or laid on a coffee table in the shape of a big bird or moved around into any shape you want,” she says. “The corn necklaces can be twisted together to make a larger coil-shaped necklace.”

She made one headpiece, which combined corn with turquoise, in honor of American troops.

Scott garnered national attention when a producer for Martha Stewart’s television show saw her work and invited her on the show in 2003.

“After the show aired, I had a huge job of filling orders for corn jewelry,” Scott says. She sells simple corn bracelets for $15. A necklace is typically $20 to $30, while the corn apparel can cost as much as $1,500 for the combination loincorn skirt and halter top.

Like Scott, artist Tara Barney also hails from the northern Great Plains. Barney, an artist from Sioux Falls, South Dakota, tried a variety of animal and vegetable materials, such as pumpkin seeds, before deciding on corn as her go-to medium for jewelry-making. Glass beads complement the colorful kernels she picks from a farm in Mitchell, South Dakota — the same farm where South Dakota’s Corn Palace gets the corn to decorate the building’s famously maize-covered facade.

“People are just shocked that it’s corn,” Barney says. “It looks like stone when I get done stringing it with the glass beads, and so it becomes a conversation piece.”

Though the finished products get rave reviews, both Scott and Barney say the process of creating the accessories can be labor-intensive.

Women have told Barney stories about growing up on farms in the Midwest and pulling the kernels off the cob when it was wet and using a simple needle and thread to create their own childhood accessories.

After picking the corn, Barney soaks it overnight to kill pesticides and mold and lets it dry in the sun the next day. Then she shucks the corn from the cob with both her hands and a special tool before drilling individual holes in each kernel to create a bead. It takes about 60 kernels to make a necklace and 25 kernels for a bracelet, she says.

Barney, who also teaches jewelry-making workshops and sells other artwork, mainly sells her creations to tourists visiting South Dakota, but hopes to expand her market to include more agriculture-based businesses such as ethanol industry meetings and events. The pieces typically go for $10 to $40 each.

So, is using corn for fashion a new and growing trend?

It’s definitely not new, say Scott and Barney, but the appreciation for corn as fashion does seem to be growing.

“The Native American peoples used corn in a ceremony symbolizing fertility and abundance,” Scott says. “When I was a kid we traveled to the Southwest and I saw those brightly colored dyed corn necklaces but I had never seen the open pollinated (Indian) corn used in fashion.”

Pollinated corn is often rounder and harder than the hybrid corn and makes for more durable pieces, she says.

Women have told Barney stories about growing up on farms in the Midwest and pulling the kernels off the cob when it was wet and using a simple needle and thread to create their own childhood accessories.

Sanly Yuen, from Los Angeles, curates vintage jewelry pieces and resells them through her Etsy store, Urban Heiress Vintage. Among her current offerings? A red corn necklace with suede leather ends. Yuen calls the piece unpretentious and down to earth.

For Scott, it’s not just the beauty of the corn that draws her and others to the plant. It’s the love of agriculture and the cultivation of crops.

“The corn seems to touch people emotionally,” she says.