Germany Says ‘Nein!’ to Chlorine Chickens From the U.S.

In Germany, there is widespread opposition to one little-known processing technique: the use of chlorine to wash chickens after slaughter. 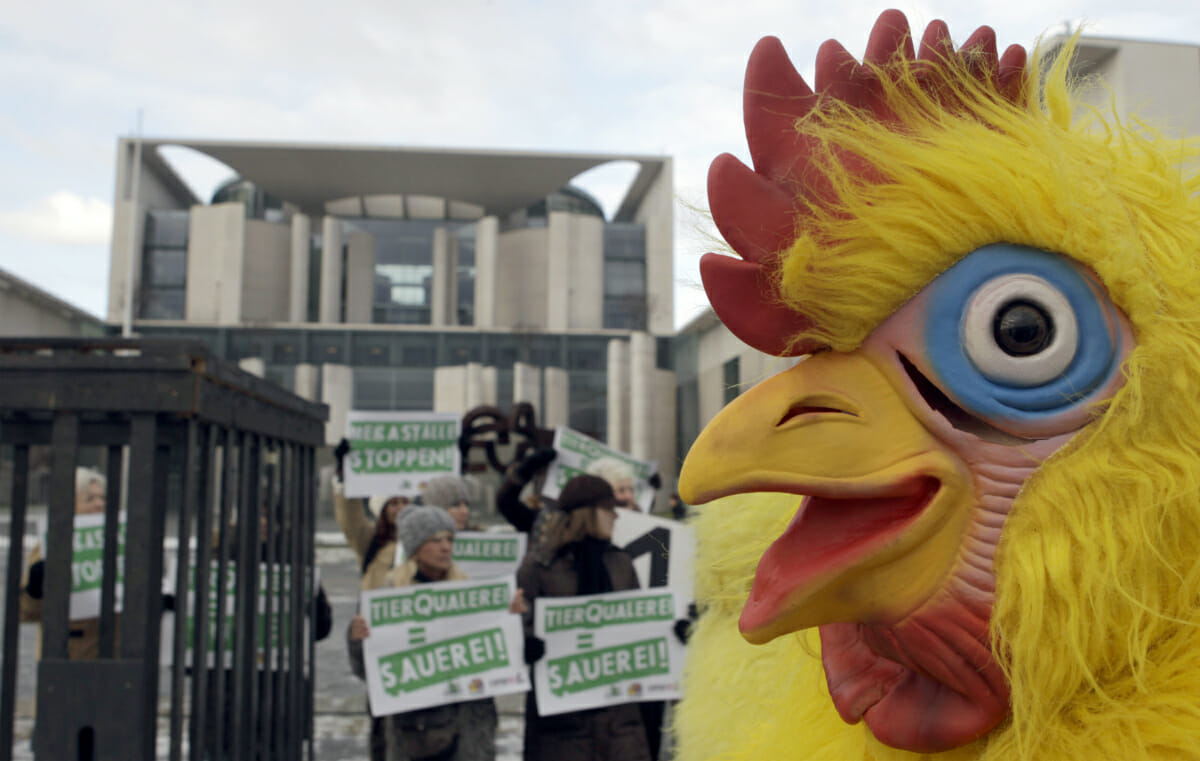 The object of their disapproval was a giant poultry slaughterhouse ”“ one of the largest in Europe ”“ and their aim was formidable: to demand a fundamental change in agricultural practice prior to Germany’s federal elections in September.

“We’ve come here,” said Astrid Goltz, an activist with an organization called CAMPACT who attended the march, “to say that we want farmers instead of agricultural factories.”

Germany, as a European Union member state, is currently negotiating a massive free trade agreement with the United States estimated to be worth 120 billion euros (or 163 billion dollars) a year. The deal, formally called the Transatlantic Trade and Investment Partnership (or TTIP), has prompted pockets of protests against all the usual suspects: genetically modified foods, animal hormone treatments. In Germany, it has also sparked a remarkably widespread and staunch opposition to one specific and little-known processing technique: the use of chlorine to wash chickens after slaughter. The process has even engendered its own vocabulary, and Das ChlorhÁ¼nchen ”“ chlorine chicken ”“ is now a household word.

By now it’s history that the protesters lost their ostensible election wishes ”“ Angela Merkel’s conservative Christian Democrats retained their majority in Parliament. But as the rallying cries of an exceptionally engaged (and well-clothed) public have gained volume, even the conservative government has made baldly protectionist promises to the German farming sector.

“There will be no imports of ChlorhÁ¼nchen from America,” Chancellor Merkel proclaimed in May. “It’s something that I’ve prevented for years, and I will continue to prevent it. No question.”

Her message dovetailed with a media bombardment that pegged ChlorhÁ¼nchen as the symbol of anti-TTIP sentiment. The newspaper SÁ¼ddeutsche Zeitung named it the “emblematic animal of the chlorine choir”, and Der Spiegel less subtly headlined the whole affair ‘ChlorhÁ¼nchen im Shitstorm;’ no translation required.

In fact, there has been a Europe-wide ban on U.S. poultry since 1997, and the issue has been subjected to challenge via the World Trade Organization (WTO). A WTO panel, requested by the outgoing Bush administration in January 2009, was set up in November of the same year but has yet to begin. Prior to the ban, according to the U.S. Congressional Research Service, exports of broiler meat and turkey to the EU were valued at 58 million dollars ”“ so the potential market at stake is not insignificant.

The prospects of reaching an agreement have become even dimmer of late, as the USDA is set to incorporate new guidelines later this year that will make the use of chlorine in chicken processing even more prevalent (they will also speed up processing lines and reduce the number of inspectors, but that’s another fish to fry).

At the heart of both sides’ arguments is an appeal to science, with varying views toward the exact delimitations of science’s application: officials in the U.S. argue that the treated poultry itself doesn’t pose a health risk, while the EU advocates for a consideration of the entire process ”“ including environmental factors and humane animal treatment.

The European Food Safety Authority has basically agreed with the claim of U.S. officials, publishing a report that found no significant safety concern associated with the application of four antimicrobial solutions (acidified sodium chlorite, chlorine dioxide, trisodium phosphate and peroxyacids). Nevertheless, they stressed that washing chickens with the solutions, “does not replace the need for good hygienic practices during the processing of poultry carcasses.”

This speaks to Germans’ antipathy toward ChlorhÁ¼nchen, at root of which is the idea that dunking a chicken into a vat of chlorine doesn’t make up for the ills (or shit) it could have accumulated along the way. “The debate is less about the question of how harmful chlorine-washed chicken meat is and what that means for the consumer,” said Alessa Hartmann, of the Environment and Development Forum. “If the chlorine-washed meat is presented to the consumer as hygienic and clean, it’s a distraction from the catastrophic conditions under which the meat is produced.”

Strangely, this is a position shared by the Forum’s erstwhile target of rancor: the Central German Poultry Association has also publicly decried American meat processing methods. In a public statement, it defended its higher hygiene standards throughout the entire meat production process, and derided chlorine treatment as a tourniquet that masks an underlying lack of cleanliness.

The argument isn’t without credibility. Despite claims that chlorine treatments reduces the risk of bacterial contamination, the prevalence of salmonella in German chickens is lower than that of chickens slaughtered and sold in the U.S. (in 2013, Consumer Reports found 10.8 percent of U.S. chickens harbor salmonella bacteria, while the German Federal Institute for Risk Assessment found 0.2 percent in its own country in 2011). Curiously, this might even be partially attributable to the disinfection process: immersion in chlorine baths has been associated with cross-contamination.

Some Germans think that the entire chlorine chicken brouhaha is just a distraction from more serious financing agreements being discussed during the TTIP negotiations. At the same time, it’s an issue that’s taken on a distinctly political flavor in the wake of a series of U.S.-German diplomatic disasters. In one satirical video (produced by CAMPACT, one of the activist hubs that organized last year’s march), taking a stance on chlorine chicken is likened to being a pesky, quixotic teenager.

The video, which has English subtitles, runs something like this:

Terrorizing, but ultimately triumphant, mother: The chickens have just been washed in chlorine. That’s how it is.