Battling the Coffee Rust: Photos of Farmers Fighting an Epidemic

While we in the U.S. worry about our caffeine fix, coffee growers in Latin America worry about their livelihoods. 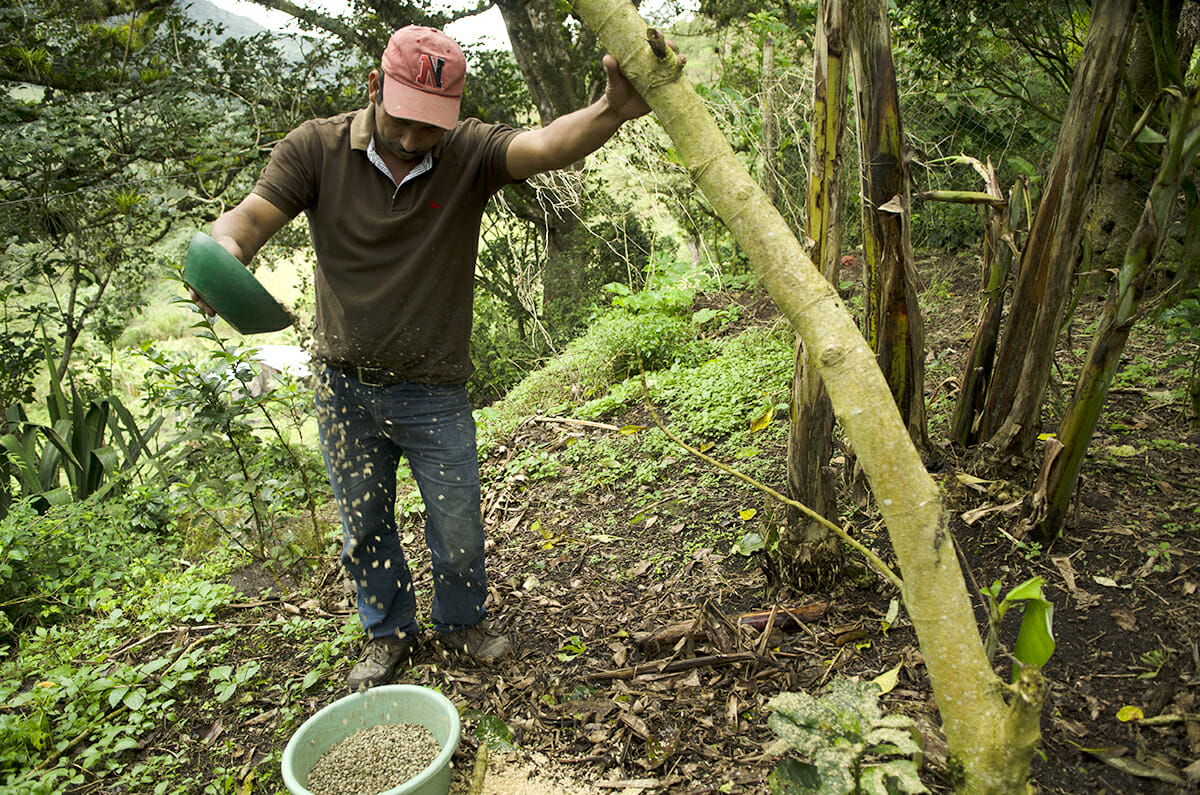 Coffee rust, la roya in Spanish, showed up for the first time in Central America in the 1970s. But this epidemic, which began in late 2012, is by far the worst the region has seen. January is usually a busy time in El Sontule, the small coffee-growing community where married couple Pérez and Villarreyna live with their youngest son Wilder and two nephews, Jeyson and Freyder. It’s the harvest season, and whole families fan out across the coffee plots, harvesting their crop. But this year, the lush, green slopes have become sparse. Leaves dotted with orange spots litter the ground or rest on nearly naked plants. “It’s been a huge blow,” Pérez says. “It’s affected us so heavily that we still don’t know what we can do.”

Pérez didn’t worry too much when his coffee plants first started showing the telltale orange spots of rust in the fall of 2012. A few could always be found here and there, year after year. But by December of that year, Pérez’s plants were left without leaves. “That’s when we started to worry, but it was too late,” he says. The family lost about 80 percent of their plants, and what remained produced less.

Almost 400,000 coffee workers across Central America lost their jobs to the rust during the 2012/2013 harvest. Many left their homes to move to already crowded cities or try their luck in the United States without papers. In Nicaragua, coffee represents over 30 percent of what USAID calls “unskilled labor” opportunities. Some people from El Sontule and the surrounding communities have left the area for the nearby city of EstelÁ­, the capital of Managua, or even Costa Rica.

Because the Pérez Villarreynas do not have enough coffee to sell, they are focused on diversifying their income and on food security. Up a short and steep hill just 15 minutes from their home, they grow beans that they both sell and eat. They also have a garden downhill from their house where they cultivate lettuce, cabbage, oranges, bananas, avocadoes and mangoes. Their son Wilder manages a little plot of his own where he grows potatoes to sell in EstelÁ­. “What we’re trying to do is diversify, grow different kinds of crops so that we’re not depending solely on coffee,” Pérez says.

Experts debate the cause of the rust epidemic. Many, including the farmers of El Sontule, blame the rising temperatures and irregular rain patterns of climate change. Others believe the rust has taken over because the farmers have not used enough fungicides. On the other hand, ecologist John Vandermeer says that deforestation and the use of pesticides have thrown asunder intricate ecosystem relationships that have by and large kept the rust under control until now. Even though the Pérez Villarreynas grow organic, shade coffee and do not use pesticides, Vandermeer says that they are impacted by the cultivation practices of farmers they will never meet. “This is not something that can be solved by an individual farmer,” Vandermeer says. “It has to be solved at a regional level.”

While Pérez Villarreynas had practically no coffee to export during the 2013/2014 harvest season. They did have coffee for their own consumption, which is good news, since they drink a lot of it. All the coffee they pick goes through a depulping machine, which removes the red, hard shell from the bean. The beans are then put in sacks and left out for three days to ferment. After that, they are washed in a trough and separated into three groups for quality. The highest quality beans go to a processing facility for drying and exportation, while the second tier stays in the community.

The beans that stay behind are dried in the sun or over a wood fire. They then go into a stone hole where they are hit with a large, wooden stick. This separates the beans from their thin parchments, which will blow away in the wind. The beans are then roasted locally in an iron roaster and taken home to be ground and enjoyed.

Even if the rust crisis could be solved quickly, many scientists are saying that within the next 50 years, few of the areas in Central America currently growing Arabica coffee will still be able to. If this is true, El Sontule, at almost 4,000 feet above sea level, will eventually become too warm. The Pérez Villarreynas may have to switch to Robusta, which is inferior in quality but can grow at much lower altitudes. This would mean giving up the coffee they are so proud of, and all the hard work and money spent on reinvestment in coffee could be for naught by the time the next generations take over.