A Glimpse Into the Ancient Practice of Water Witching

Like the Ouija Board of finding water, all you need to be a water witcher is a dowsing tool and some quality telepathic communication. 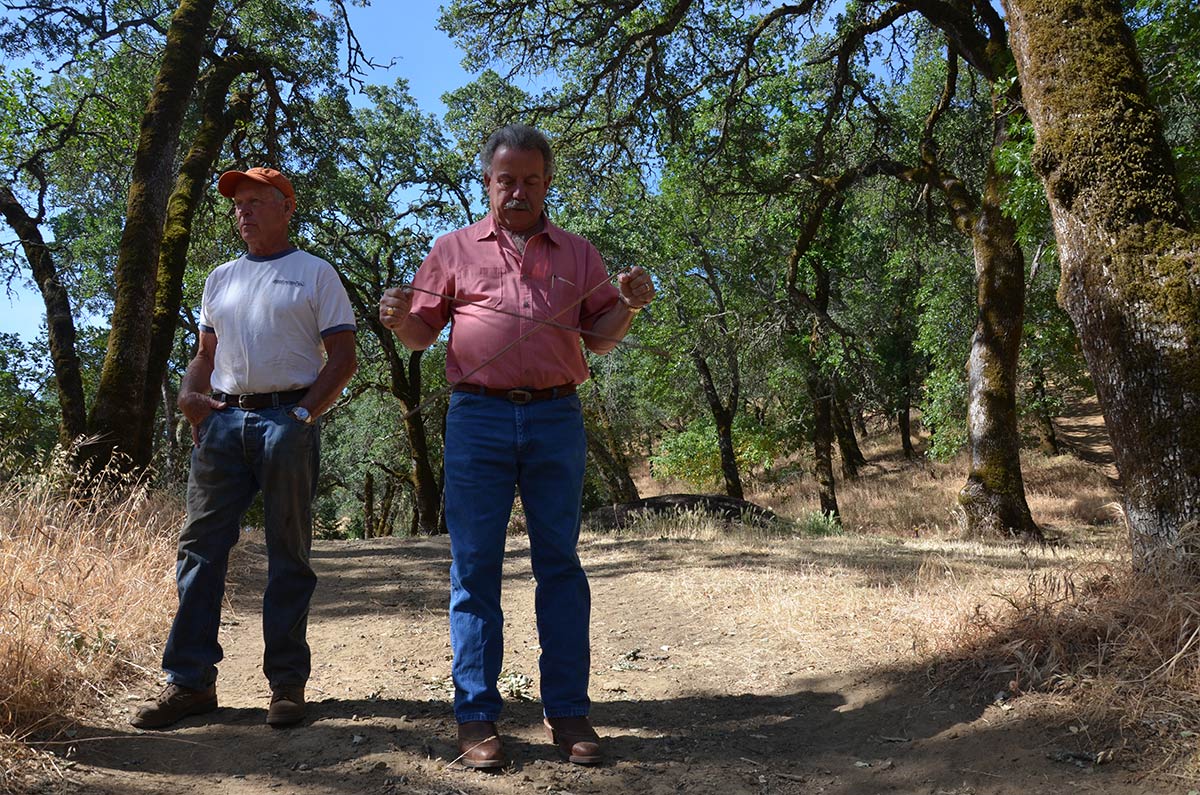 What Mondavi was concentrating on is the ancient practice used for finding groundwater known as water witching, or dowsing. Witching is believed to have been in use for centuries, and involves using telepathic or verbal communication with a dowsing tool to relay information regarding questions asked by a dowser. Dowsing can be done via many different tools, including but not limited to: two L-shaped copper rods, a willow branch, a pendulum or a weight tied to a string. It has been utilized to find anything from water to oil to answers about life to the ripest peach on a produce stand.

As California faces its third year of drought, with 36 percent of California in Stage D4 or “exceptional drought,” witchers have seen their business booming. (Drilling companies and geologists, two other options for those looking for water, have also seen a rise in interest.) The US Geological Survey reports that 2013 to 2014 has been the driest year for the state of California since 1895.

Dowsing can be done via two L-shaped copper rods, a willow branch, a pendulum or a weight tied to a string.

And according to the UC Davis Center for Watershed Studies, California’s agricultural scene can expect $10 million in lost crop revenue and $6.3 million in additional pumping costs. With the amount of available water decreasing landowners are spending more money drilling. Many are forced to drill in multiple locations to find an area with sufficient water flow, in addition to the fact that existing wells are being pumped dry. Landowners looking to drill a well on their property contact a drilling company to find out how to locate groundwater, and are typically given three options:

1. A witcher, as dowsers who witch professionally often have relationships with local drilling companies which refer clients to them.

2. A geologist, which involves geophysical techniques including the use of electrical currents, or gathering clues from the terrain, or topographical science. In an interview with Allen Christensen of the US Geological Survey, he explained, “Generally the best indicator of whether you have water nearby is to look at a well nearby, and then you can make some assumptions based on that water level. If you have no idea if there’s a well nearby and you don’t know water level you can use indicators such as plants, the lay of the land, so to speak. You can draw a lot of very good clues as to whether there’ll be water near you.”

3. Drilling based on terrain and size of the property, as smaller properties leave few options for well locations. “A normal rule: if it’s a small parcel we’re pretty limited as to where we can put the well,” said Gonzalo Salinas of McClean and Williams Well Drilling and Pump Service. “Many places all we have is a 50-by-50 or 100-by-100 area so we just have to do it there. On small parcels we’re likely to be limited to the space, and we’re dictated by accessibility.”

Despite the fact that it leaves many questions unanswered (including one of the most important being: How exactly does it work?) farmers continue to employ dowsers, drillers continue to refer landowners to water witches and a unique group of people continue to learn the skill. According to Gonzalo and Sheri Salinas, who own and operate the well drilling company McClean and Williams, found in the Napa Valley since 1949, most domestic water supply is drawn from wells found by witchers. This happens for a number of reasons: dowsers charge significantly less than geologists. Dowsers are often more connected to the land not only because of their supposed ability to witch and communicate with it, but also because they were most likely used to locate groundwater on the majority of properties in the surrounding area. And they have a familiarity with existing wells, which lays the groundwork for even a slight understanding of how water moves through a collection of neighboring parcels, which comes in handy as records documenting well locations are sealed to the public.

Despite the fact that it leaves many questions unanswered (including one of the most important being: How exactly does it work?) farmers continue to employ dowsers, drillers continue to refer landowners to water witches and a unique group of people continue to learn the skill.

Having seen dowsing work and not work, Sheri finds herself reluctant to fully commit to support of the practice. “I don’t push the feeling,” she said. But because some properties exist in hard water areas, coupled with the toll taken on the state’s water supply as a result of the drought, “when you’re in the outer areas where there’s not a lot of information and you really need water you want to go with whatever you can to try to find it, so if there’s something that’s got a little bit of a chance that it’ll work, then sure, give it a chance.”

As a geologist, Christensen has seen dowsing work and not work, but does not attribute their success rate to any sort of mystical connection or unexplainable knack that dowsers have, but to their understanding of the land around them. In a study conducted by German scientist Hans-Dieter Betz in the late 1980s approximately 700 wells were drilled based on a dowsers findings and within that sample 96 percent were accurate. Christensens’s response to this study: “I bet you I could get a very similar success rate drilling in areas that I understand. I could drill a number of wells in most basins of Southern California and guarantee the cooperator water. That’s just because of the experience I have with these basins and knowing not where to drill. I’m not going to drill on top of a mountain that’s several hundred feet tall and you’re gonna drill a 50 foot well, that’s just not a practical place to drill a well.”

Despite the seemingly illogical foundation that it is built upon, when you shed the stigma attached (shake the image of pointed black hats, eerie communication with swirling crystals and humming rods — or its significant lack of scientific explanation), it’s clear that the community of believers are connected by one simple thread: An agreement that witching relies on faith in something that fails to be explained by practical, concrete, scientific evidence – but capable of delivering tangible results often enough to support their belief that something, somehow is working.

In 2014, active dowsers are spread all over the map, having learned how to witch through many different channels. Karen Ashley, head of the West Coast chapter of the American Society of Dowsers, picked it up in the living room of a friend one afternoon in the ’80’s. Mondavi was pulled into a vineyard one day in his teens because his girlfriend’s father saw something in him. And The Salinas family has had dowsers in their family for many generations, and have a well on their property that was witched in the 1950s. Some believe that it can be learned, while others like Mondavi believe you have it in you or you don’t. But regardless, “There’s something about witching, we just don’t know exactly what it is. But there’s definitely something about witching,” said Gonzalo Salinas. “I trust it because I’ve seen it work.”

Landowners like the Youngs rely on dowsing to find their water source for many reasons – success with other wells that have been witched on their property, referrals to witchers from drilling companies – but, ultimately, it boils down to the lack of other options. Thus her and her husband have resigned themselves to doing whatever it takes to find water, including giving up their lush garden space, abundant with sunflowers that sits behind a shed at the back of their property – because that’s where Mondavi said they’d find their best supply. “I don’t take water for granted anymore, that’s the new gold,” said Jane Young.

As ridiculous as it sounds when you try to explain it, it is similarly bizarre to witness in person. After a few hours spent on the Young’s property (during which he located three potential locations for water supply), Mondavi discussed his method on our drive back into the valley.

When he arrives on a parcel and breaks out his rods, his first direction to them is: “Find the underground stream.” He walks until the rods cross and he knows they have led him to a water source. His mustache dances on top of his lips that remain slightly parted, as he whispers numbers and questions directed at the all-copper rods that extend in front of him.

Witching relies on faith in something that fails to be explained by practical, concrete, scientific evidence.

“Are there five gallons [of water] per minute?” If the rods cross, this indicates a “Yes” answer (a common indicator in the dowsing practice, as rods crossing means yes, no crossing means no.)

“Twenty gallons?” Yes or no.

And as long as the rods continue to cross he ups the number until the rods stop responding.

Occasionally Mondavi would make note of information he got from his L-rods to Chip and Jane. “You have more water on the property but they’re telling me that’s the best spot,” he said. He also delivered bad news, telling them that regardless of what their well used to pump, it wasn’t tapping a water source that would provide that any longer. It wasn’t just the presence of water that Mondavi described, it was the nature of its flow: So many gallons of water will be found if they dig this deep, the water flows from this end of the property to that, certain sources will be better than others.

As California moves into its third year of drought, Mondavi finds himself booked for weekends to come, with two to four projects similar to this every week. And driller Gonzalo Salinas says that he’s the busiest he’s been since he got into the industry 24 years ago.

Marc has faith in the practice; he claims a success rate of over 95 percent. And ultimately, he’s less concerned with how dowsing works, and more concerned with the reason it’s been gaining increased popularity. “California is a desert. Fundamentally, California is a desert and the government has not developed water in this state since the early ’60s,” he said, “We have 38 million people now, we have more agriculture than we did [then], and we’re just runnin’ out of water.”

For people like Mondavi, the Youngs and the Salinas, if it works then it works. And to the people who don’t believe? Well, Mondavi says, “That’s their prerogative.”