Cars and trucks adapted for quail hunting, and a Q&A with the man who photographs them. 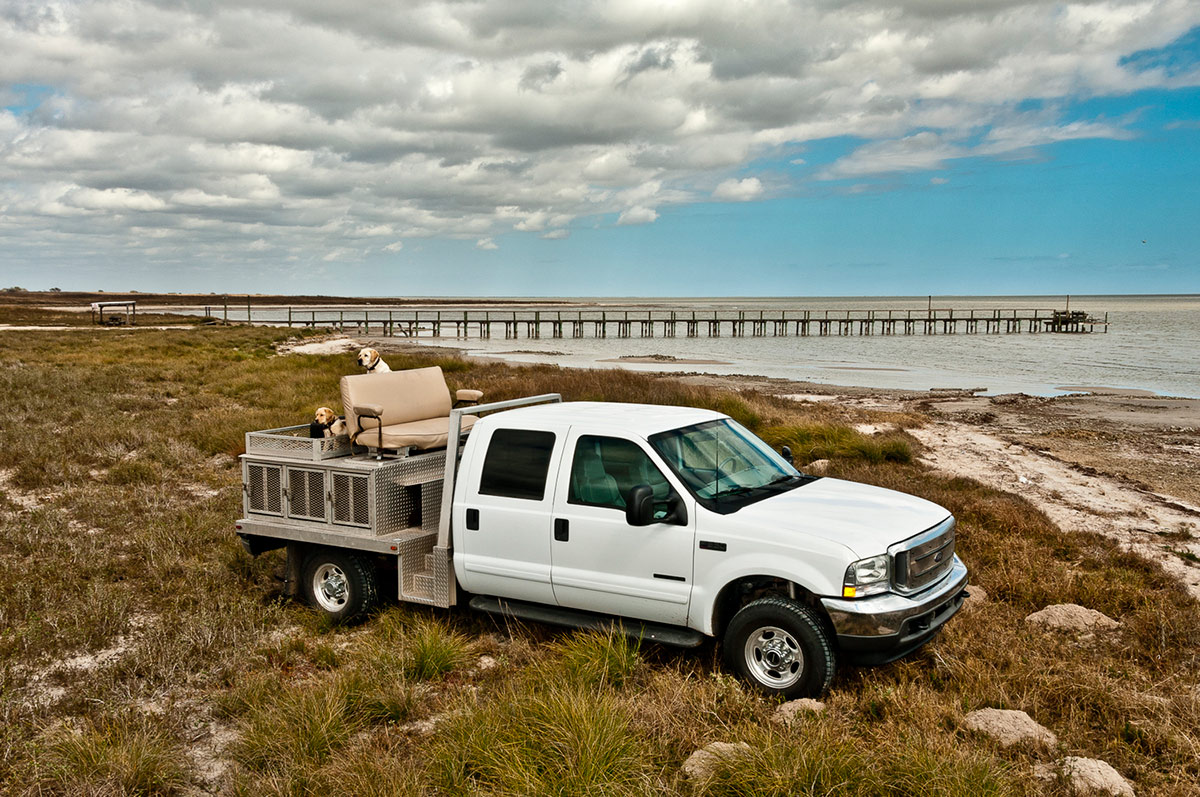 Modern Farmer: How did you discover the rigs?

Lokey: I was born and went to high school and college in Texas, and my dad teaches people how to shoot shotguns. He ran the Orvis shooting school down here in Houston in the ’80s: He’s been a hunter all his life. I moved back to Texas two years ago so that I could focus on this project, which I started three years ago. I grew up quail hunting with him, we used to do it walking with the dogs, when there used to be more quail.

MF: That’s right, quail have been in decline – but what does that have to do with the rigs?

Lokey: In the last 10 years, quail have declined 80 percent and also hunters have declined 80 percent, because there’s not as many birds. And yes, that’s another reason for the function of the trucks, since the birds are spread out so far now. Before, you could just walk and you would have your limit before you got far enough to wind yourself. But now you have to drive a couple miles to the back 40 or to the front 40, and that’s where the trucks come in handy. Plus we have rattlesnakes, and we have a zillion kinds of cactus, and its soft sandy ground with holes. So the rigs are function as well as luxury.

Lokey: You could walk through fields and just kick up quail, like pheasant. The quail hold in a bush. The dogs run through the field just like a bloodhound would, and when they find prey, they freeze. That’s why they call these dogs pointers, because it looks like they’re pointing straight at the birds. When that happens you get off your truck and walk over. Two people, two guns, one on the left, one on the right. The dog handler walks through the bushes and scares up the quail, and you shoot ’em. And then just like a retriever the dogs, springer spaniels or labs, they find the dead birds. Then you go on to the next spot.

MF: Why are there cages on the trucks?

Lokey: It’s so hot and these dogs love hunting so much that they would run themselves to death if you didn’t stop them. You can only run em for about 15 to 20 minutes or they’re gonna overheat, so you keep them in the cages. Then you bring out two more dogs, then you run those and you bring out two more. That way you can continue to hunt (otherwise the day would be pretty short). And there’s water: a lot of these vehicles have 40 gallon pressurized water tanks in there so they can give the dogs water or wash ’em down and cool ’em off.

MF: Why do the rigs have so many seats?

Lokey: Say I have a ranch, I’m an oil man or whatever. I want to entertain clients or friends, so I invite couples, and now there’s eight of us, plus the dog guy – the handler. That can be a lot of folks. Not everybody hunts, but everyone wants to be out in nature instead of back at the ranch. You can drink your wine and gossip. It’s like playing golf or going fishing.

MF: Why are the rigs elevated? Lokey: They’re high so folks can survey the land. At that higher level you can see a lot farther and watch the dogs work the field.

MF: These rigs all seem very custom and personalized – why do you think that is?

Lokey: They have the personality of their owner: It’s just like any other car. Also, people like to one-up each other. For example, say he’s got a BMW and his friend gets the new BMW. Now he wants to get the new BMW 7 series. It’s all those extra mufflers and things that people like that make you proud of your rig. And some of them are highly personal. For example, the Rolls Royce was the owner’s father in law’s favorite car. As a mexican-american he thought that having a Rolls Royce meant he had made it in Texas. When he died they were just gonna sell it, and it was only gonna go for about 20 thousand dollars. It’s an 82 Rolls Royce Silver Spur. So instead of selling it, they turned it into a quail rig, putting another 20 thousand into it to cut out the doors and all that. It’s actually one of the less expensive ones that got turned into a rig, but people guess it would be the most expensive.

MF: Do many people name their rigs?

Popular
7 Smokable Plants You Can Grow That Aren’t MarijuanaBrian Barth
How to (Actually) Get Rid of Fruit FliesEmily Baron Cadloff
What to Do With an Abundance of PeppersShelby Vittek
6 Differences Between Llamas and AlpacasAndrew Amelinckx
Yes, the Government Really Does Stash Billions of Pounds of Cheese in...Emily Baron Cadloff
Explore Modern Farmer
Related
Food & Drink, MTMF
Meet the Former Chefs Growing Restaurant-Driven Produce in Suburban AlbanyKerri Sullivan
Food & Drink
‘Tis the Season For GleaningCrystal Sands
Plants
This Seed Detective Travels the World Tracking Down Lost CropsEmily Baron Cadloff
Books, Cookbooks
In Her New Book, Molly Yeh Goes Back to BasicsEmily Baron Cadloff
wpDiscuz
We use cookies on our website to give you the most relevant experience by remembering your preferences and repeat visits. By clicking “Accept”, you consent to the use of ALL the cookies.
Cookie settings ACCEPT
Privacy & Cookies Policy