Why Cows and Fireworks Don’t Mix

Everyone loves fireworks - except for cattle herds. 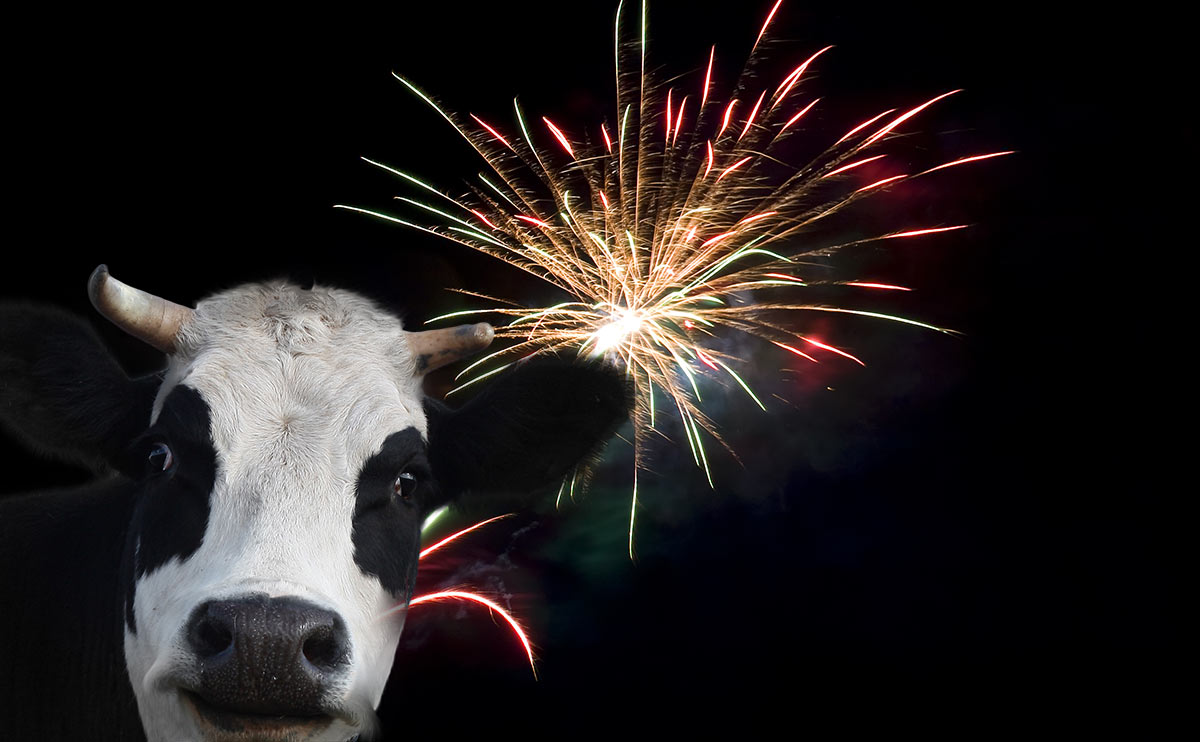 Across the country, these local papers are giving fair warning to would-be pyrotechnicians about the dangers of setting off fireworks too close to livestock. It isn’t that surprising when you think about it. Western movies have often relied on a well timed thunder clap to send cattle into a stampede and household pets may bolt at the sound of fireworks.

Are fireworks really making cows flip out? It isn’t that uncommon. In 2013, a Maryland dairy farmer was forced to put down four of his cows after they were injured in a stampede caused by a firework show in a nearby field. The farmer sued both the organizers of the event as well as the firework manufacturer for $13,140.20. Freedom isn’t free.

The 2012 Independence Day fireworks in New Lexington, Ohio, could have ended with shouts of ‘don’t tread on me,’ after spooked cattle broke free and started a stampede that brought an early end to the festivities.

The 2012 Independence Day fireworks in New Lexington, Ohio, could have ended with shouts of “don’t tread on me,” after spooked cattle broke free and started a stampede that brought an early end to the festivities. (No one was injured.) Rob Stalling, the local Fire Department Chief, put it simply “the cows got spooked. It’s just a fact of nature.”

It isn’t just freedom-loving American cows that are exercising their right to assembly. Canadian cows are also being spooked by fireworks. During a 2012 Victoria Day firework show in Springwater Township, a farmer’s cows attempted to secede via stampede when they crashed through their fence. It took more than two days to recover all the cattle.

The issue of firework-induced stampedes have garnered concerns and even legislation. Aspen Journalism reported on a story of a private firework show that caused a rift in a community, along with stampeding horses, and prompted a review of the town’s regulations. A local resident, whose dog ran away and is presumed dead due to the fireworks, summed up the problem: “A party is one thing, but fireworks are contrary to everything about our area. Why would we allow such unnecessary explosions to scare our livestock and the wildlife that we strive to protect. Isn’t that contrary to our rural character?”

“We were in terror every night because of fireworks.”

Lakes Region Weekly reported that in Maine, a state that just recently allowed firework sales, fireworks were wreaking havoc with animals across the state. An animal welfare group drafted a bill to put safeguards for in place to prevent animals from being spooked. “Somebody set off fireworks and the cattle stampeded, running over their calves. I lost one [calf], but a lot of them got hurt,” said Tina Bisson, a farmer from Topsham, Maine. “We were in terror every night because of fireworks.” Topsham has since passed a local ordinance banning fireworks.

So don’t be surprised if you hear “moos” along with “oohs and ahhs” during your 4th of July fireworks — and remember to be mindful of our patriotic bovines.

I was recently in wales and a large pheasant shoot was going on the shotgun noise was horrific, does this not affect livestock?