These farmhouses, built with native materials and a modernist twist, integrate architectural design seamlessly into the surrounding rural landscape. 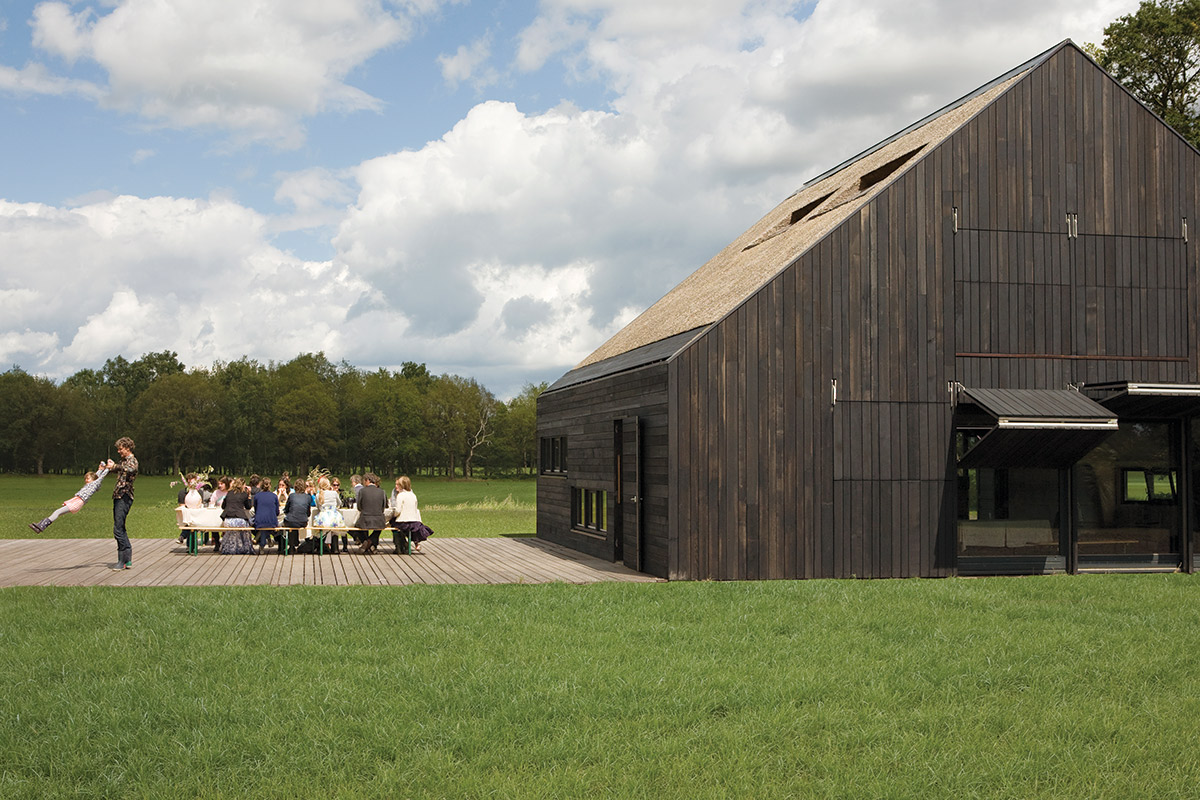 Along with puppies, kittens and babies, barns must surely rank among the things people are drawn to in a deeply emotional way.

The human mind seems to instinctively appreciate that which is simple, honest and of nature. These are certainly the principles of Bureau B+B, an architecture and landscape design firm based in Amsterdam – and, when tasked with designing a set of properties in Overijssel (a province northeast of its home city), the firm has put them into practice.

‘We took our cue from the spirit of the existing buildings. They are linked to the surrounding forests, fields and brooks.’

As in much of the Netherlands, Overijssel is known for its dairy farms. In 2003, Fortis Vastgoed Landelijk, a Dutch real estate developer, commissioned Bureau B+B to design 10 residences for plots on a 2,000-acre parcel of land that encompasses fields, forests, peat bogs and streams. The house plans range in size from 560 to 1,100 square feet. One of the 10 designs – the least complex of the group – was built as the project’s model home and completed in 2009.

Bureau B+B’s work has a decidedly modernist bent (the term rustic is not in the company’s vocabulary), but for their work in Overijssel, the firm focused on what already existed. Namely, they worked with the unique landscape mixture,’as well as older, existing buildings adjacent to the development site, rather than imagining a whole new vista. Houses and farm buildings in the area are not ornate; they have sturdy, compact lines and are absent of flourishes like turrets and balconies. The materials used are native woods, most commonly ash, and roofs are often built of thatch made from the reeds that grow in the area’s wetlands. Bureau B+B’s goal was to achieve designs that adhered both to the best of modernist architectural principles and to the warm, organic nature of the place.

“We designed the new houses with the idea that the landscape is the starting point, as well as the recognition that a country estate is strengthened by the way the dwellings relate to one another,” says Bureau B+B architect Frederica Rijkenberg.

The model home (pictured on these pages) was built as a test case, or showcase, for the rationale behind the development. Many newer countryside houses built in the Netherlands – and, indeed, in the United States – attempt to simulate the grand, stately hauteur of the estates of aristocrats from a bygone day. Neither Bureau B+B nor its client appreciated that aesthetic, says Rijkenberg. “This estate distinguishes itself by its simple and modest buildings,” she says. “We took our cue from the spirit of the old, existing buildings, and the way they are linked – literally and aesthetically – to the surrounding forests, fields, ponds and brooks.”

The land, she says, “functions as an enormous garden.” The sight of older buildings, such as a hay barn surrounded by tall grass, inspired the firm to imagine newer buildings also “submerged” in the landscape. “We sought to connect the style of construction to the landscape, to discover the landscape by following the suggestion provided by the older dwellings,” Rijkenberg notes.

The existing structures were humble, yet had what might be described as a sort of rural elegance. One featured a thatched hipped roof topped by a cupola that was likely a later addition. These extant structures were sided with wooden boards that, as Rijkenberg explains, obtained a black color after being treated with tar as rain-proofing. It was a smelly but effective measure. But for the test-case house, Bureau B+B stipulated red cedar siding, the wood being stained to achieve a similar black color that would, as with the siding on the older buildings, weather to gray over the years.

The designers also specified a thatched roof, but gave it a modernist twist. The bulk of the roof is thatched, but the margins around it are made of wood, putting the thatch in a kind of frame. The effect is striking. The thatch gives the test house a properly countrified look, but the wooden “frame” gives the roof a feeling of separateness. If you look at it long and hard, it is as if the roof were being shown like a movie on a screen.

The most marked architectural detail is the shutters. Almost all of the house’s openings – doors, window walls and windows, with the exception of discreet clerestory windows in the second-floor bedrooms and bathrooms – are covered by vertical and horizontal shutters. On the ground floor, horizontal wooden doors slide back and forth to provide sunlight and air as needed. On the second floor, the shutters hinge so that they rise vertically; when open, they form awnings for the windows.

That design detail is, in its small way, ingenious. When the shutters are closed, the house has a quiet, snug, buttoned-down look. When they are open, the house seems to emit a welcoming, energetic and free-spirited vibe. Either way, the building has the naturally enticing effect of all barns, and things that look like barns. We are drawn to it, as we would be toward a puppy.

How is it framed and hinged to open and close so smoothly and is it lockable?

Popular
7 Smokable Plants You Can Grow That Aren’t MarijuanaBrian Barth
6 Differences Between Llamas and AlpacasAndrew Amelinckx
USDA Identifies Some of Those Mystery Seeds Sent From ChinaDan Nosowitz
10 Summer Squash Varieties: Some You Know, Some You Don’tDan Nosowitz
This Former Teacher Has Moved Her Classroom to the FarmLindsay Campbell
Explore Modern Farmer
Related
Food & Drink, Plants
Born To Be WildLindsay Campbell
Food & Drink
My Vegan ExperimentFrank Giustra
Lifestyle
Farms Are Becoming Popular Staycation DestinationsLindsay Campbell
Food & Drink
The Report That Will Inform the Next Five Years of Dietary Guidelines...Dan Nosowitz
Farm Favorites
Read the latest reviews on our favorite products.
Immigrants Feed America