The Futuristic Farming at the 1939 World’s Fair

The 1939 World's Fair was a celebration of American innovation and ingenuity set atop 1,200 acres of former swampland and an ash dump. 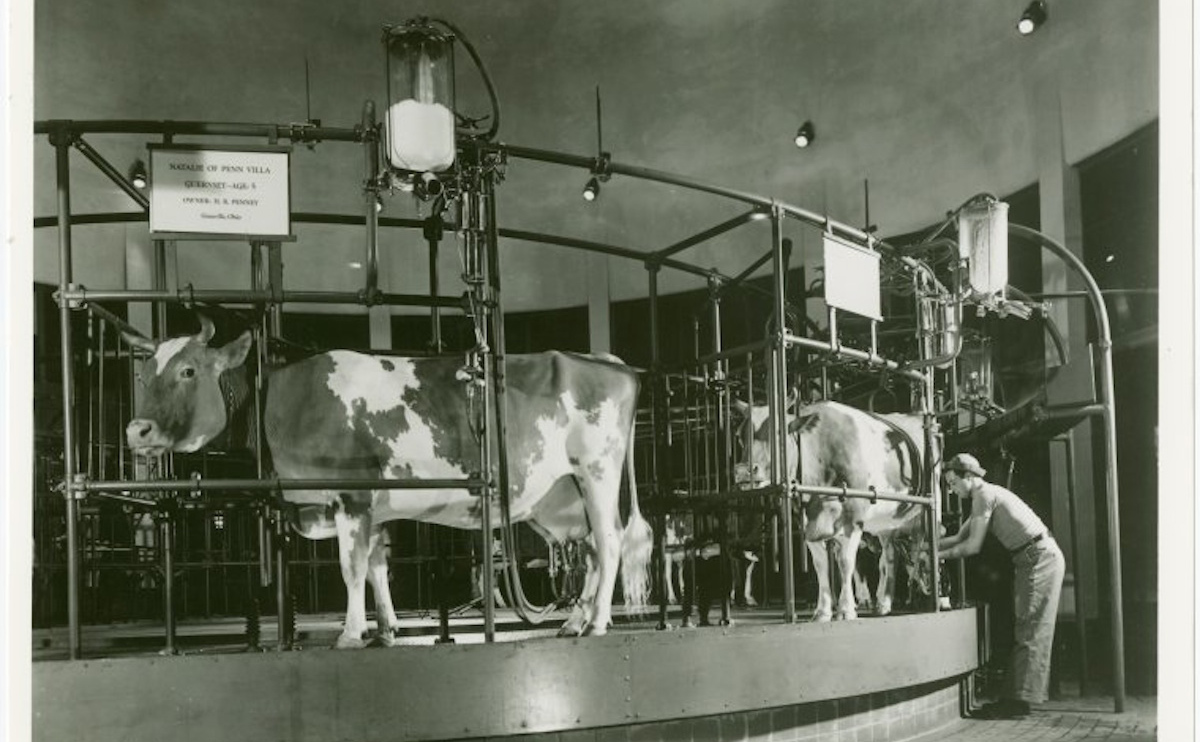 This ethos was on prominent display at the 1939 World’s Fair in Flushing Meadows, Queens, a celebration of American innovation and ingenuity set atop 1,200 acres of former swampland and an ash dump. The event fetishized everything sleek, modern, and mechanized. There was no romance to the idea of dirt under the fingernails or munching on a straight-from-the-dirt carrot.

Unsurprisingly, the event, which was planned in the years following the Great Depression, extolled optimism, prosperity and American greatness. The theme was “Building the World of Tomorrow,” and nationalism was everywhere. Opening day coincided with the 150th anniversary of George Washington’s presidential inauguration, and one exhibition involved burying a time capsule to be exhumed 5,000 years later, in 6939. Inside: ephemera including a Mickey Mouse watch, copies of Life magazine, and seeds for corn, oats, cotton, tobacco and more.

The 44 million attendees gawked at new products from GM and Frigidaire, as well as a digitized, synthetic voice (the Voder) in the AT&T pavilion – but innovations in food and farming were making the news.

The event fetishized everything sleek, modern, and mechanized. There was no romance to the idea of dirt under the fingernails or munching on a straight-from-the-dirt carrot.

Over in the Food Zone, major corporations including Heinz and Beech-Nut designed pavilions that blurred the line between advertisement and demos, peddling wares and giving viewers a peek into how the goods ended up on their plates. The Continental Baking Company Building – which was decked out with red, white, and yellow balloons that recalled a Wonderbread bag – showcased Hostess cakes in progress. Plus, a wheat field sowed behind the complex gestured towards the origins of the packaged food. (Think of it as a kind of meandering, abstract farm-to-table moment.)

The food pavilions featured golden shafts that conjured stalks of wheat, and a surreal, building-sized mural emblazoned on the side of the building. A New York Times headline breathlessly described how the installation “Dramatizes the Story of Man’s Achievement in Enlarging Diet Through Science.”
Nowhere was that ballyhooed achievement more palpable than in the exhibits that celebrated efficiency and mechanization. Case in point: The Electrified Farm, a 1-acre, functioning farm outfitted with a house, chicken coops, a horse shed and more, sought to demonstrate why electricity should be indispensable to farmers. The exhibit included 100 instances of electricity, including an “electric freezing cabinet” that enabled farmers to “handle their own cold storage problems.”

Another sleek example was the “Dairy World of Tomorrow,” sponsored by Borden, where visitors could saddle up to a carousel to see up to 50 cows being milked in real-time by the Rotolactor machine. The machine was actually invented about a decade earlier, but hadn’t been viewed by the public. It worked like this: Cows were paraded in and hosed down before a handler attached a teat-cup to the udder, and the machine sucked away for twelve-and-a-half minutes. A single machine could milk 1,680 cows three times a day, producing about 26,000 quarts of milk. Among the bovines on display was Elsie, a Jersey cow who became iconic mascot. (She quickly captured visitors’ hearts. An on-site survey reported that 20 percent of visitors’ questions related to the brand’s machinery, 20 percent to the location of restrooms, and 60 percent asked which cow was Elsie.)

Regional and international cuisine was up for grabs on grounds, with more than 40 sit-down restaurants and 261 refreshment stands spread throughout. Attendees could feast on anything from grab-and-go hamburgers to Swiss liver dishes, or swig Heneiken at the Zuider Zee beer garden, housed beneath a windmill. Meals went for about $0.43 a pop.

But for those housewives committed to raising strong, American offspring, there was a 32-page Borden’s cookbook starring ingredients that were “healthful for children,” including “chocolate-flavored sweetened malted milk.” No udder-touching needed, of course.