On the ignored art of cooking fishheads. 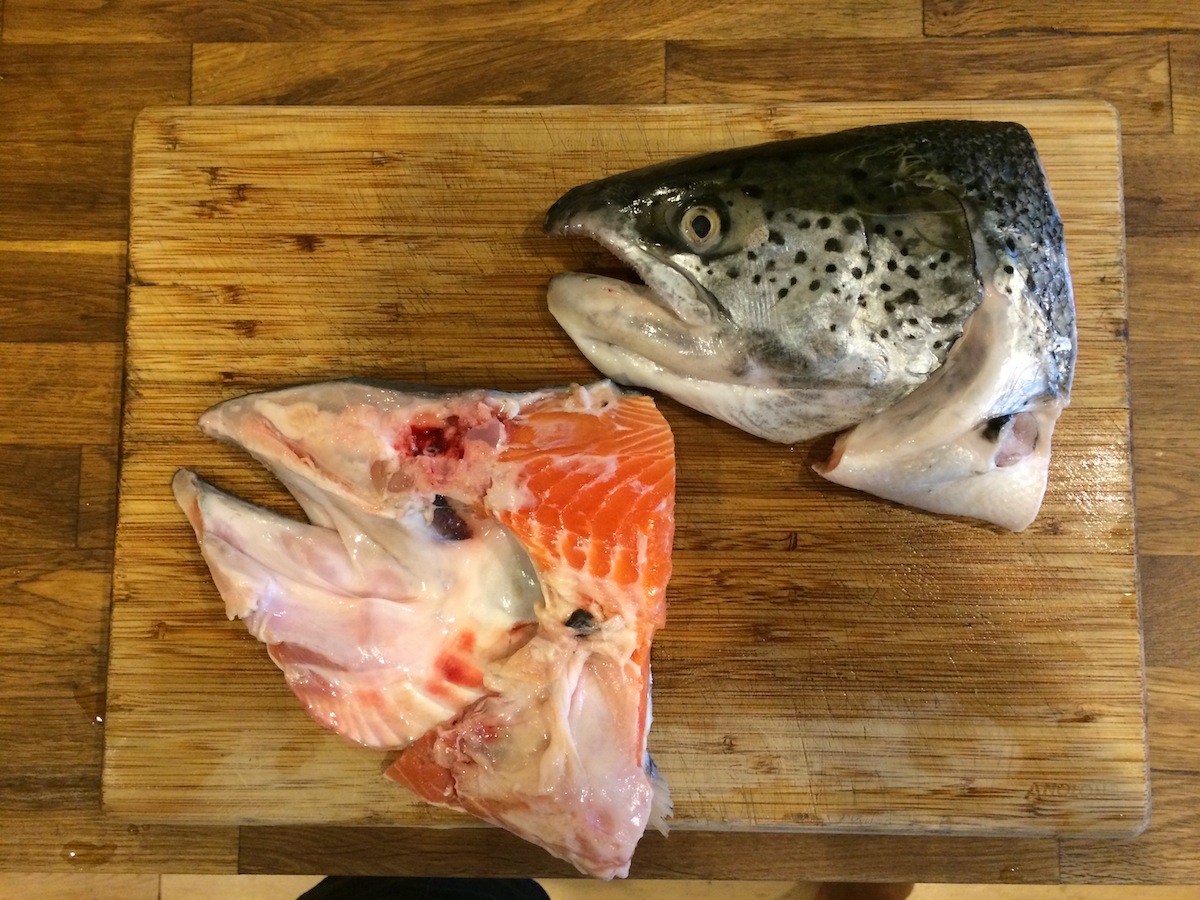 American cuisine has a curious relationship with fish.

Like most food choices, region and culture largely determine what we deem fit for the table and what we consider inedible. We moan at the thought of a seared fillet of black cod, yet wince at the thought of its face on our plate. We relish the golden nuggets of deep-fried catfish ”“ a whiskered, bottom-dwelling scavenger ”“ yet we are off put by the humble carp, whose lifestyle is nearly identical. In fact, our common American carp species are actually prized both as a sportfish and as a food source in Asia and Western Europe. But here in the US, not only is carp almost never found on a menu, they more frequently serve as swimming targets for bowfishermen who, at best, use the carcasses as fertilizer. The fish’s head suffers a similar, arbitrary prejudice as we shun all parts but the faceless fillets. And even then, the culinary possibilities we envision for those fillets are limited still: baking, deep-frying or pan-searing come to mind.

We end up wasting a lot of edible fish and fish parts.

This is all to say that we end up wasting a lot of edible fish and fish parts. There’s a lot that goes into this, I imagine. Our culture typically rejects things that look slimy, and fish are indeed slimier than a cow. Some struggle with picking small bones from their mouths. For others, the very name of a fish (Patagonian Toothfish) may be so psychologically unpalatable so as to necessitate a new, more edible name (Chilean sea bass). Finally, cooking whole fish with intact heads can be an intimidating undertaking, and so we create distance by cutting and slicing until we are left with anonymous flanks of lean fillets only. 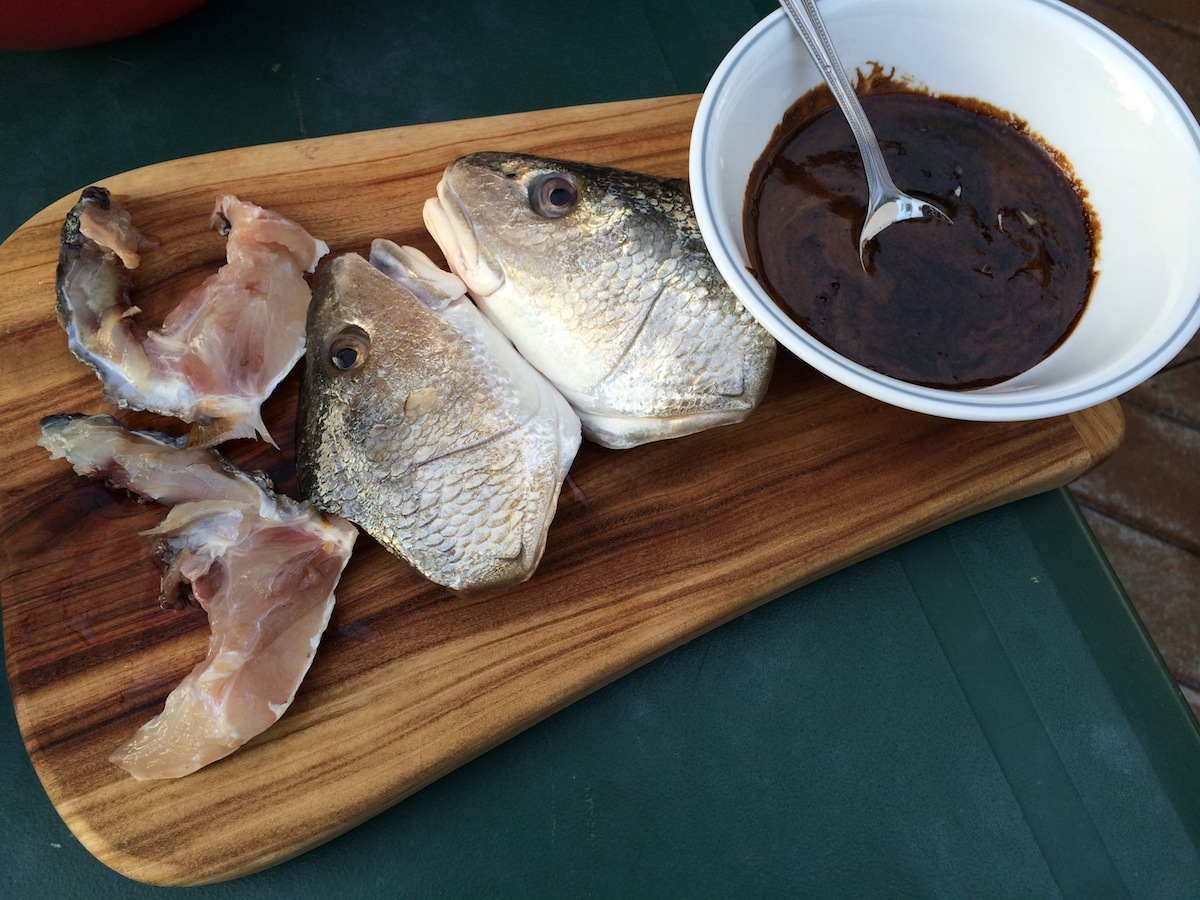 This exercise in extreme waste is particularly true among the legions of sport fisherman who, like myself, endeavor to bring home the day’s catch. But whether we are inclined to the fresh or the saltwater species, prejudice against every part of the fish besides the fillet transcends salinity and states alike. I’ve seen piles of glistening bluefish heads doomed for the landfill after a day’s trip off the New Jersey Shore, and I’ve seen paint buckets full of crappie heads tossed into the North Carolina woods for stray cats and raccoons. I’ve witnessed massive hauls of striped bass in the San Francisco Bay unceremoniously decapitated and filleted, then stood by haplessly as I watched men heave plastic bins full of heads back into the cold ocean water.

For a real show, stop by Biscayne Boulevard in Miami when the sport fishing charters return in the late afternoon and the first mates throw kilos worth of discarded fish heads back into a Tarpon-infested marina. High drama.

I’m that guy that shows up to these places with a cooler full of ice and a fistful of dollar bills. You could be, too.

Let’s examine the fish head. Unlike, say, the head of a chicken, a great deal of a fish’s net weight (in most cases) is in its head. There may be bountiful meat found tucked in and around the collar of the fish, encased in the cheeks, and perched atop its forehead. Throw it away, and you’ve lost a significant percentage of your catch. Ignore it at the market, and you lose out on one of the best bargains in town. Most of all, there is flavor in the fish’s head. Flavor like you wouldn’t believe.

Fresh fish is both a joy and a privilege, and thus the short window of time to enjoy such quality should not be squandered. This includes the head.

The good news is that the list of facial expressions available to a fish is unimpressive. In general, fish can’t blink or cry, and they can’t seem to shake the accident of birth that endowed them with a smile or a frown. Further, they don’t make a peep. While there are always exceptions to the rule, these exceptions are more like statistical outliers. In other words, fish generally appear catatonic, whether alive or dead.

The bad news is that fish decompose. Quickly.

Like all seafood, I put fish heads into two categories: Fresh (less than 48 hours old) and not fresh (more than 48 hours old (or frozen). Both are edible, provided they are properly treated, but these categories are strict. Fish that have been recently caught are easy, so long as they have been iced immediately. Many people, however, don’t know how to read the signs of freshness in a fish, and this is particularly true if the fish you buy has no head. Avoid this trap.

Most fishmongers will sell you the head for pennies on the dollar, if not give it to you outright. But it’s critical to be selective here.

Checking for freshness starts with a house key in your fingers and a willingness to appear at the fishmonger as if you were a forensic crime specialist at the state bureau of investigation. First, scrutinize the eyes of the fish. Bright, clear, bulging eyes means fresh. As time goes on, the eyes become cloudy, dry and begin to sink back into the ocular cavity. Meet that accusing stare with your own, and if you have problems with eye contact, now is the time to work on that. (Once the eyes become cloudy, that’s preservation time — which is a whole different story.)

After satisfying yourself with the fish’s eyes, take a key out of your pocket, and lift the gill cover (operculum). You should feel little resistance as you peer at the gills underneath. A live fish’s gills are ruby red, and from there, they age into the color brown. The redder, the fresher.

Above all, if it stinks, run.

Larger heads like salmon, striped bass, red drum, grouper and tuna merit different preparation than small heads. For these larger species, the heads may become a meal unto themselves.

Perhaps the most famous part of the fish’s head is the collar. This is the little-known jewel of the fish that chefs reserve for themselves and their friends once the rest of the fish is sold to their customers. The collar is the succulent, tender and flavorful wedge that exists in the space between the pectoral fins and the gill cover. The Japanese call this part of the yellowtail tuna “Hamachi kama,” and if you can find a Japanese chef to make it for you, you’re in for a treat.

Because the fillet line begins behind the pectoral fins, a fish’s head will include two collars. If you have fish head large enough, these should be cut off and reserved for special treatment. Start by removing the gills, and then separate the two collars from the rest of the head. Thoroughly rinse these collars, and pat dry. The remainder of the head may be split or left whole, again, depending on the size and species of the head.

Unlike a fillet, a large fish’s head is almost made for a grill. It more easily lifts off the grate, and the bones and collagen in the skull protect the delicate meat from overcooking over a direct flame. Broiling works in the same fashion. Of course, whole steamed heads can be dressed with rich, savory sauces that work particularly well with Asian and Southeast Asian flavors. Alternatively, prop one of these large heads nose-up on a plate after roasting in an oven for an hour, top with a fresh pesto and scatter with cherry tomatoes drizzled in olive oil.

Directions
1. Combine soy sauce, ginger, garlic, sake, mirin, lime slices, and brown sugar into a small sauce pot and bring to boil.
2. Reduce heat to simmer, and reduce by half.
3. Brush salmon collars with teriyaki glaze, then place on grill, skin side down, for 5 minutes.
4. Flip collars, brush with glaze again, and cook for another 5 minutes. Garnish with fresh lemon wedges.

For the smaller species, the heads are perfectly suited for broths and stocks for soups and stews. These may be gently boiled down with aromatics, herbs and wine, strained and added to give richness and body to braising liquids and sauces. Everyone knows that the secret to a mind-blowing clam chowder is a luxurious fish stock, and this is ground zero. Small heads may not be the sexy centerpieces that their larger counterparts are, but they may lend depth and substance to curries and tomato-based sauces. Just be mindful of the bones.

I like to think that flavor speak for itself. But we all know this isn’t true. We eat with our eyes first, even if we are eating, well, the eyes first. So, I get it. Eating the head of an animal isn’t for the faint of heart, and it may challenge our most stubborn cultural predilections. It’s primal, it’s raw, and the labyrinthine maze of a fish’s skull doesn’t always lend itself to the width of a fork. But whether you’re a high school cheerleader or a seasoned angler, fish heads are within easy reach. Make them count. Familiarizing yourself with the fish’s head means you can savor the forgotten inches of fresh seafood you couldn’t otherwise afford, or you can minimize the opportunity cost glaring at you from the pile of discarded fish heads, whether measured in money or minutes.

So, whether you’re up for the eye contact or you prefer a good disguise, remember that it’s all in your head, and the fish’s too. 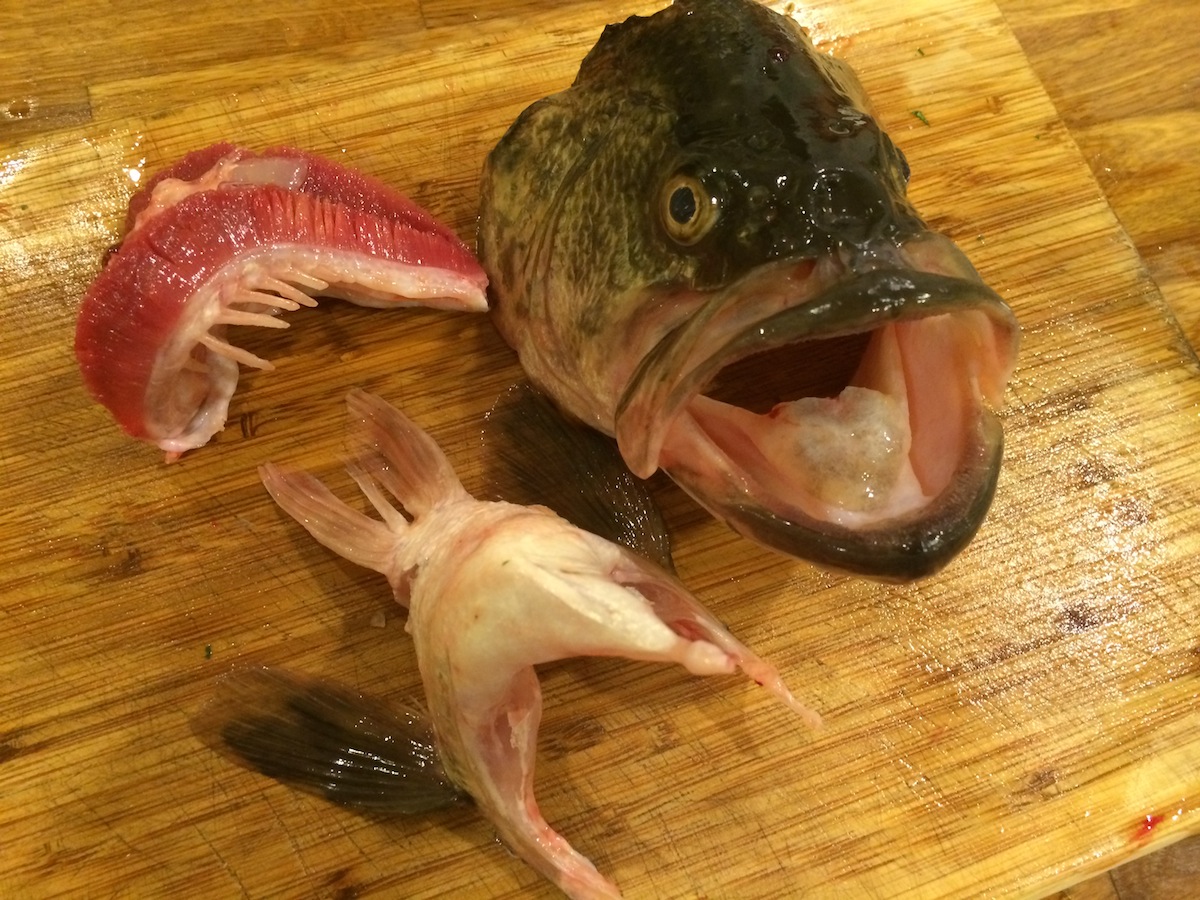 Directions
1. Melt one stick butter in large stock pot, then fry fish heads for 10 minutes over medium-high heat. Remove from heat and set aside.
2. Add remaining 2 tablespoons of butter, then add remaining dry ingredients to pot, stirring frequently until aromatic.
3. Add white wine and water, then bring to a boil.
4. Simmer on low for 30 minutes, skimming off any foam that surfaces.
5. String through fine-mesh strainer. Will keep refrigerated for 3 days, or frozen for 2 months.

I love fish heads! I get super fresh salmon ones at my local Asian market (.99/lb) so I always trim off some meat from the head and collar to make poke as an extra treat. I then marinate the head for about 20 minutes in “whatever” I’m in the mood for that day. Roast the head, eat the delicious skin and flesh and save the bones and drippings to make a collagen-rich soup. I’m half-Japanese, born in Japan, and no fish head ever went to waste in our household growing up. I prefer salmon raw as in sashimi but the… Read more »