Floods of molasses, torrents of beer and antifreeze in your wine? We take look at when food production goes terribly wrong. 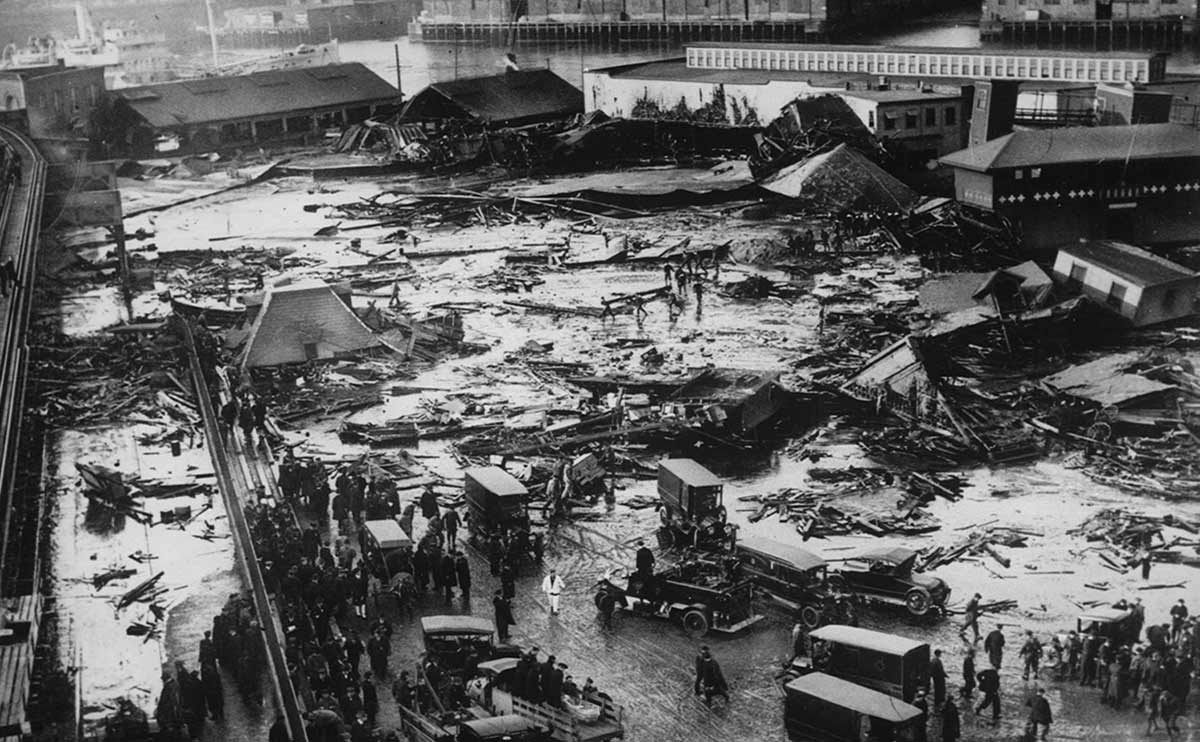 In 1814 an absurdly large wooden vat filled with English porter beer ruptured unleashing a torrent of freshly fermented brew. The wave tipped neighboring vats within the Meux and Company brewery resulting in 323,000 gallons of ale pouring into Tottenham Court Road, London. The deluge trapped several local residents in their basement rooms and killed a barkeep on duty at the street’s pub. Eight people perished, most due to drowning as beer engulfed their small homesteads.

In 1919, on an unseasonably warm January afternoon, a 50-foot-tall vat of molasses buckled and collapsed sending a thick sticky wave pounding through the streets of Boston’s North End. Reaching nearly 15 feet high, and traveling at 35 mph, the sugary blob tossed cars into the harbor and moved small buildings from their foundations. The carnage (pictured above) killed 21 people and injured 150 more. The owner of the molasses company, the Purity Distilling Company, originally blamed anarchists for the collapse, but it was later discovered that the warm temperatures caused the molasses to expand, buckling the tank’s support system.

In the winter of 1971-72 Basra, Iraq’s largest port, received a large shipment of imported grain to help combat a dismal harvest the previous year. The grain, shipped from Mexico and the U.S., was dyed bright pink and coated in methylmercury, a proven fungicide at the time. Labeled in English and Spanish but not Arabic, the grain quickly made its way into the food system. After selling off their already depleted stocks of grain, many farmers relied on the neon cereal to survive the winter. The dye was easy enough to wash off but the mercury was not. Taking anywhere from two weeks to a month or more for symptoms to begin to show large quantities of the tainted grains were consumed by men, women, children and livestock before the deadly mistake was realized. In the months to come hospitals in the region saw over 6,500 cases of mercury poisoning, resulting in nearly 500 deaths.

In 2013 molasses stuck again, this time in Honolulu harbor. A faulty pipeline sent 1,400 tons of the sugary stuff into the sea. Unsurprisingly the city had no plan in place to deal with a major molasses spill so it was decided that the sticky substance would be allowed to sink to the bottom and wash away naturally. Divers in the harbour report that the molasses has killed nearly all life in the harbor as the thick sugary goo both deoxygenates the water and smothers bottom-dwelling species like coral.

In 1985 the Austrian wine industry was forever tainted when it was discovered winemakers were sweetening their vintages with diethylene glycol, an ingredient used in the production of antifreeze. Riding the wave of popularity of sweet dessert wines in Germany during the late ’80s, Austrian winemakers, suffering from a particularly tart harvest, looked for a way to sweeten their wine without damaging the body of the drink. The poisonous additive was first found in a bottle of Auslese in a German supermarket. Further testing discovered the nefarious tampering to be pervasive throughout the entire Austrian industry. The resulting Dionysian dystopia rocked the wine world and effectively ended Austrian wine exports for nearly two decades. Luckily no deaths resulted from scandal, aside from the death of Austrian dessert wine. (It has since recovered. Even a little poison won’t keep people away from a good trockenbeerenauslese.)

In May of 2000, a Wild Turkey bourbon distillery and warehouse in Lawrenceburg, Kentucky exploded in flames consuming nearly one million gallons of Hunter S. Thompson’s favorite spirit. Flaming bourbon spilled from the crippled warehouse into the nearby Kentucky River, causing the town to enact immediate water usage restrictions for residents and businesses. Although no humans were injured or killed (or inebriated) in the blaze, the river’s fish population did not fare so well. (Despite idiomatic phrases like “drinks like a fish,” it turns out fish actually should not be swimming in water soaked in bourbon.) Kentucky’s Department of Fish and Wildlife Resources estimate the disaster killed over 220,000 fish, the largest fish die-off in the state’s history.

The Near Disaster of the Tapioca Tanker

In 1972 a tanker carrying 1,500 tons of Thai tapioca caught fire while anchored in Cardiff Bay, Wales. While firefighters on boats were able to douse the blaze before it consumed the ship, the water used to put out the flames seeped into the hold, causing the starch to swell as the heat of the blaze cooked the tapioca like a giant pot of pudding. As the starchy mass expanded, locals worried the tapioca time bomb would cause the ships hull to buckle and sink. Luckily for the ship’s crew and pudding fans alike, as the heat from the fire cooled so did the tapioca and the ship was able to carry on to its final destination. It is not known whether the tapioca survived the incident or not.

(Editor’s note: A previous version of this article stated that the grain delivered to Basra was labeled in English and Spanish, but not Iraqi. There is no Iraqi language — the majority of Iraqi citizens speak Arabic, while a smaller portion speak Kurdish. We regret the error.)